To say the least, I have found the setting of Frostgrave to be inspiring. I've painted more things for this game than I can say for a lot of others. Each of my two main Warhammer armies has a single painted figure. I already have 2 for Frostgrave.

There is something about a magical, snow-bound city ruined by the sins of arcane excess, that captures my imagination. I imagine the city as a lost Atlantean ideal, powerful in its time but now crumbling and forgotten, and filled with all manner of demons, undead and weird beasts leftover from bygone days. With that in mind, I really want to start building on my terrain collection to suit that feel.

Most of my terrain is pretty generic, so I already have a few ruins, the odd wizard's tower and of course my dungeon terrain to draw from. Ambiance is everything though, so first I had to find a good backdrop for all that terrain. I settled on a 4'x4' Alpine F.A.T. mat from Frontline Gaming. 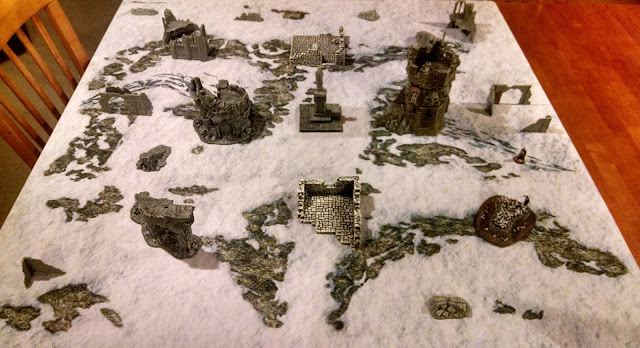 It's on the bigger side for Frostgrave but it has the perfect bleak, grey look for what I envision. It looks really snowbound and the rocks could be hidden streets. I love these mats. I have two others, one for X-Wing and I just picked up another for 40K. They are vivid, durable, non-slip and come with their own carrying case. A bit pricey, but worth every penny in the end.

While I was buying things, I also found this pair of beauties: 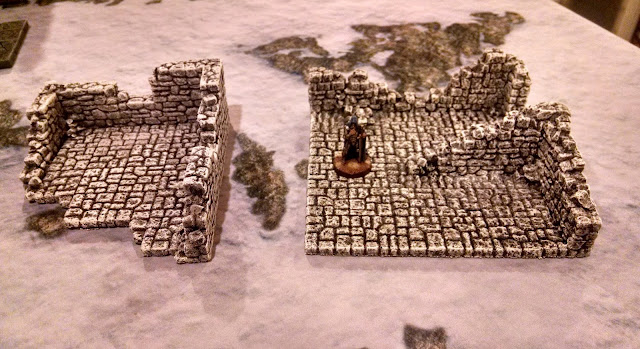 They are pre-painted pieces from War Torn Worlds, which makes their terrain out of recycled tires. They are flexible and durable, which is a big plus because I'm starting to have to stack terrain in my cabinet. The color scheme is little light, but they do the trick quite nicely.

Next I settled in to paint a piece that I figured I would ignore forever. I picked up the Dragons Don't Share set from Reaper's second Bones Kickstarter with the intent of never painting it but imagining doing do until the day I died. Howeve, the ruins were so perfect that I had to get some paint on them at least. 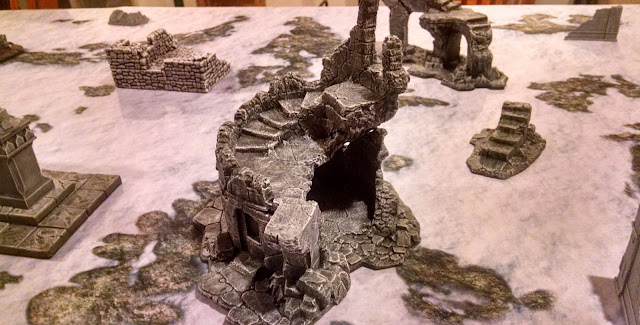 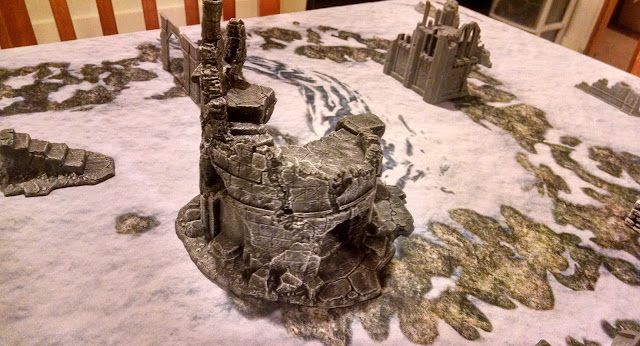 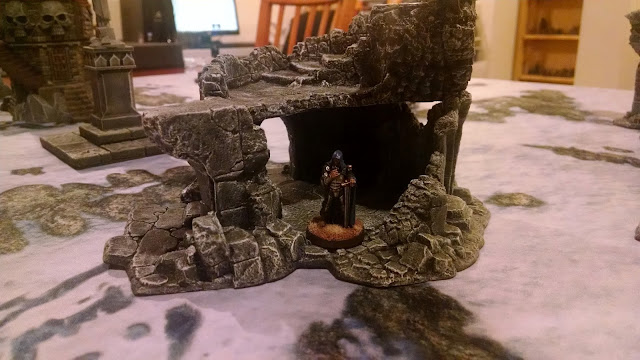 The color is just my dungeon blend on a larger scale. I learned the hard way that Bones doesn't take spray primer well, so the piece is a little tacky, even with a couple extra loads of paint on it

And the top comes off for convenient model placement: 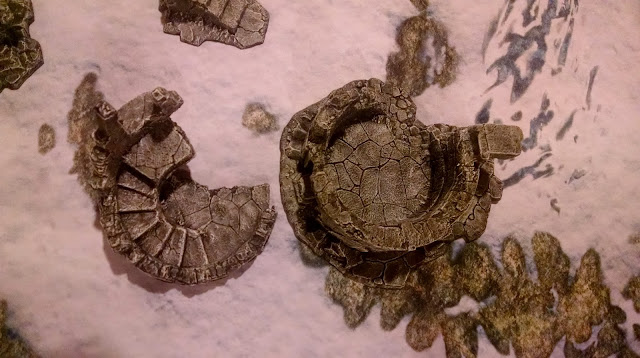 The set also has a set of crumbling stairs made up of a couple pieces for modularity: 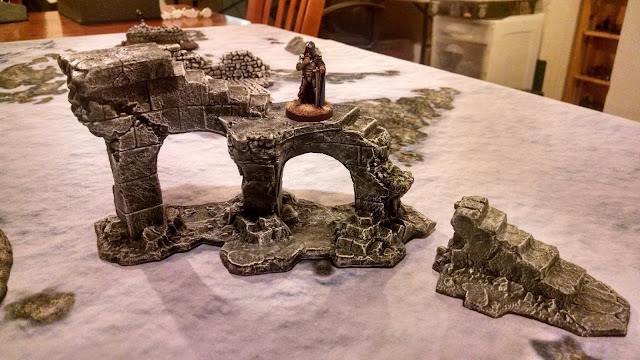 But the whole thing fits together if you want it to be one big piece: 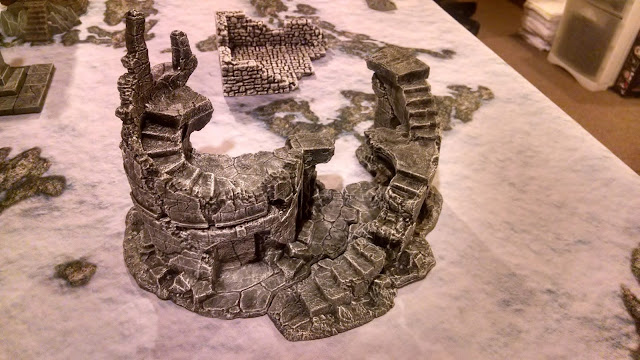 I have two notes on this piece. First, you may notice a big gap in the above picture. That is because there is another piece of ruin that has a huge dragon perched on it. I could not bear to tear the dragon off, but it would also look weird with a live dragon always attached to it. If I had another copy of that piece though, I would add it in a heartbeat. Second, for some ungodly reason the top portion with the stairs came in two pieces, both of which were very warped. All of my best efforts with a heat gun were for naught, but I found a solution. I filled the crack with my new favorite basing material, Golden pumice gel. On a piece like this, you'd never know the difference and it came out perfect.

Finally, I wanted to add a little weird and ominous to my Frostgrave, so I set to scratch building. You see, a while back my wife found a little resin pond super cheap online and bought if for me on a whim. I think it was originally meant for fairy gardens or something, but it is a bit out of scale as a pond. It has been floating around for while, always waiting for a project, and I finally found one. 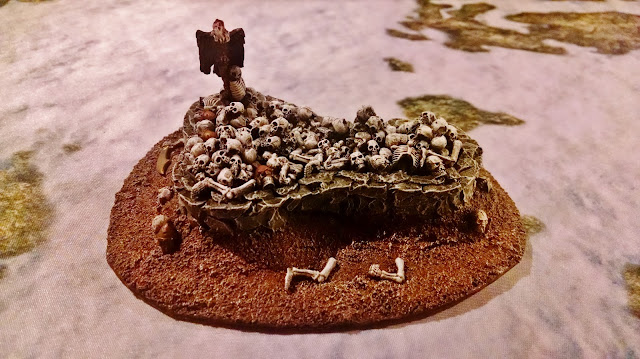 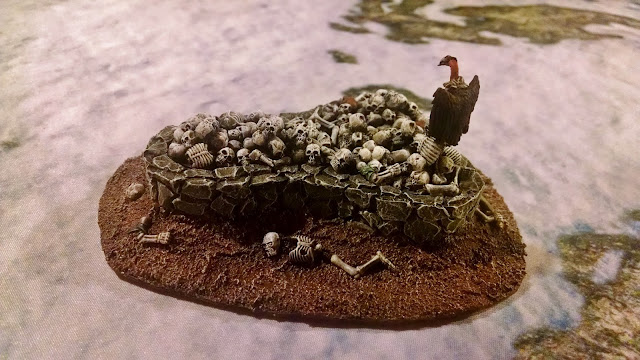 I stuck it to some foamcore, cutting out a place for it to sit down into to lower the height of the walls a tiny bit. Then I filled it with clay to get rid of dead space, plus some more clay around the edges to blend it into the base. Then I used a mix of skull piles from Ristul's Extraordinary Market and spare Games Workshop skeleton bits from ages ago to make it look stuffed to the brim with bones. An old vulture from a Tomb Kings screaming skull catapult completed the look, plus some texturing with the ol' magic pumice gel.

The idea is that it's an old well or decorative pond that has been filled to the brim with dead bodies, possibly from before the city froze. But maybe they are unlucky adventurers after all, and who (or what) put them there in the first place...?

That's all for now. I'm hoping to add some larger ruins at some point to give the table a little more height and choke things up a bit. For now, though, I think it's a good start.