Lighting the Way (to Better Basing)

Hello again, gaming friends. I'm afraid this installment will be a little light (heh) on actual projects, since I have acquired a new and time consuming job that is very hard on the feet, along with a nasty cold. Time spent lying down is not time spent gaming or painting I'm afraid. But I did find time for a little project that was both simple and fun.

In our current Pathfinder campaign, our group has been joined with a fun and rather useful ally. This ally is a lantern archon named Laurel-Marshall Carancros Latuch. Once a mighty hobgoblin commander (for the good guys; hobgoblins are good in our setting) during the Ogre Wars, Latuch was killed in battle and his spirit sealed away in a small sphere for a couple thousand years. Now reincarnated as a lantern archon, he lends our group support as well as...ahem..."critique" of our battle plans.

Not having any suitable models I decided to build one and this is what I came up with: 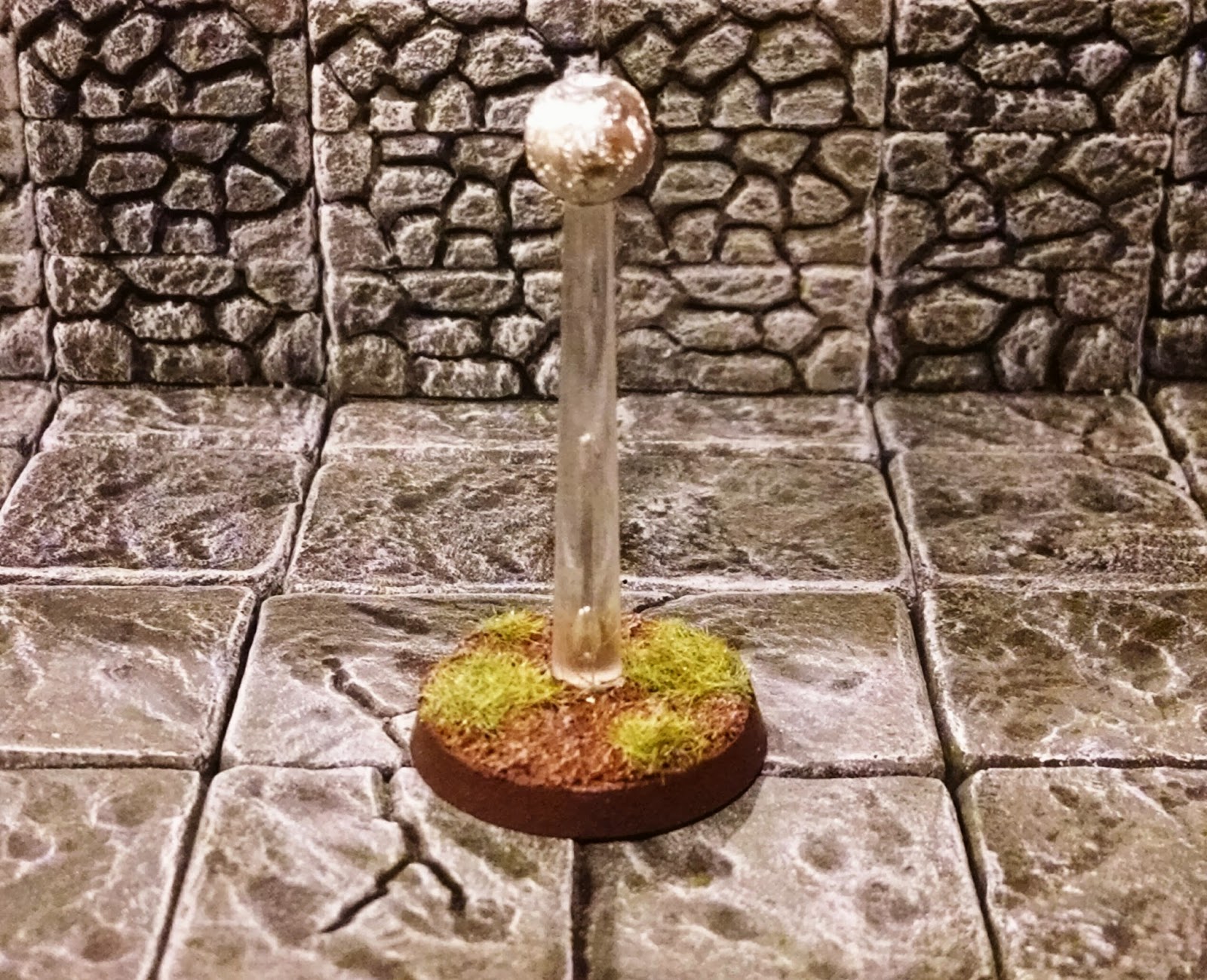 After all that build-up, he doesn't cut that imposing a figure, but that's really not his fault. He is, after all, a glowing ball of light. But at least he was incredibly easy to make. Our glowy friend here is just a bead on a flying stand attached to a base. I left the bead silver, gave the rough edges some touch-up and then based it. Dead simple and fits quite nicely. The base was the most complicated part.

And speaking of bases, I wanted to share my new way of basing. This is a method that has existed for a while now, but I wanted to give it a little shout out because I'm a big fan.

You see, aside from a brief affair with green flock in the early 90's, I have always been a glue/sand/paint baser. I have always liked the gritty texture, flexible color scheme ability and relatively natural look it provides. I also hate the amount of drying time and the way sand falls off while you're trying to paint said sand. I've tried dozens of tricks to try and reduce the time and make it less tedious but to no avail. Then I found this: 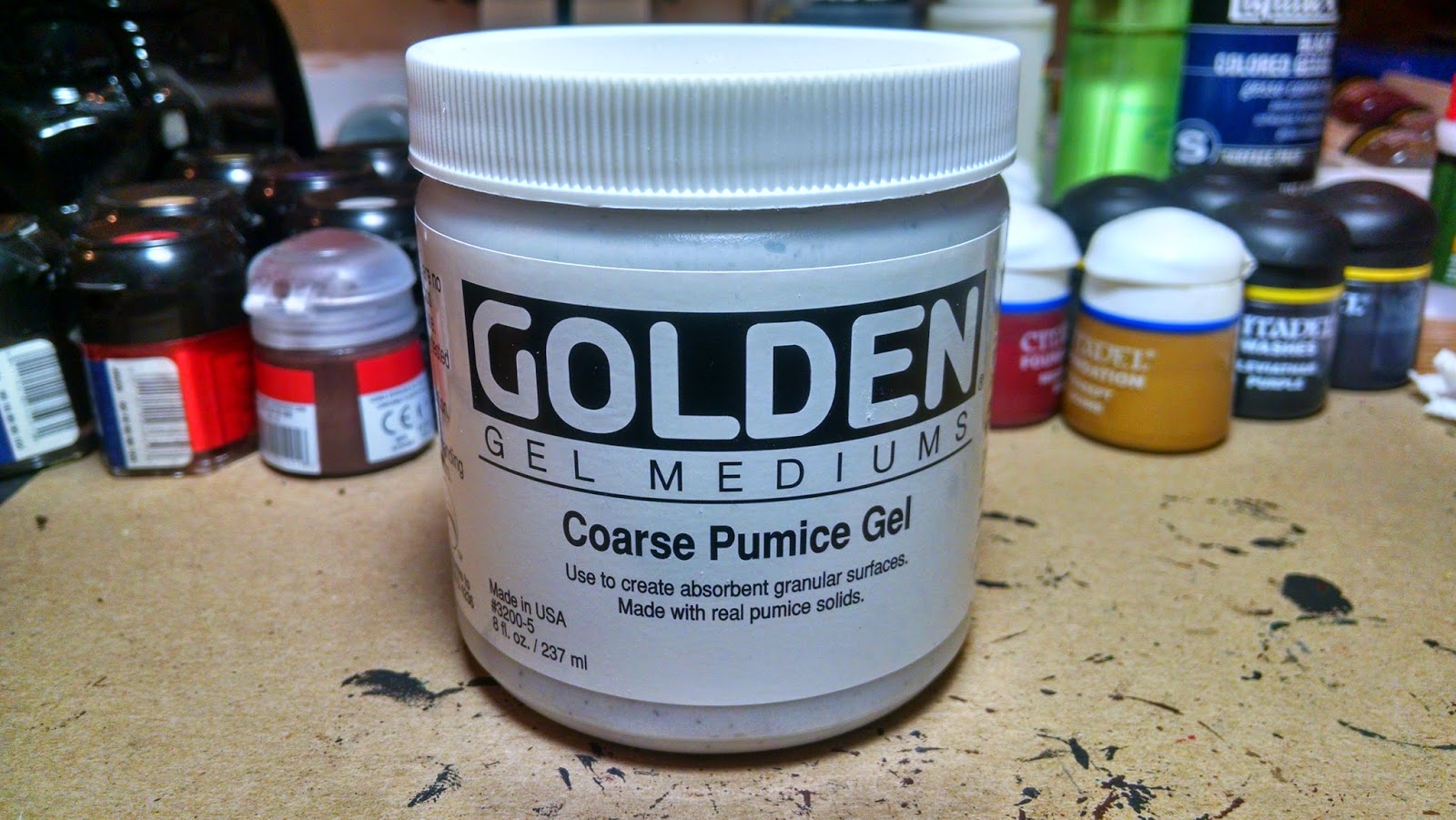 Like I said, it's probably no revelation to many hobbyers, but I stumbled across this stuff in a craft shop and picked it up. I'd heard of texture gels before and this one was definitely the right price, 8 oz for $10. An amount like that lasts a long time, especially for someone like me who only paints a few figures at a time. 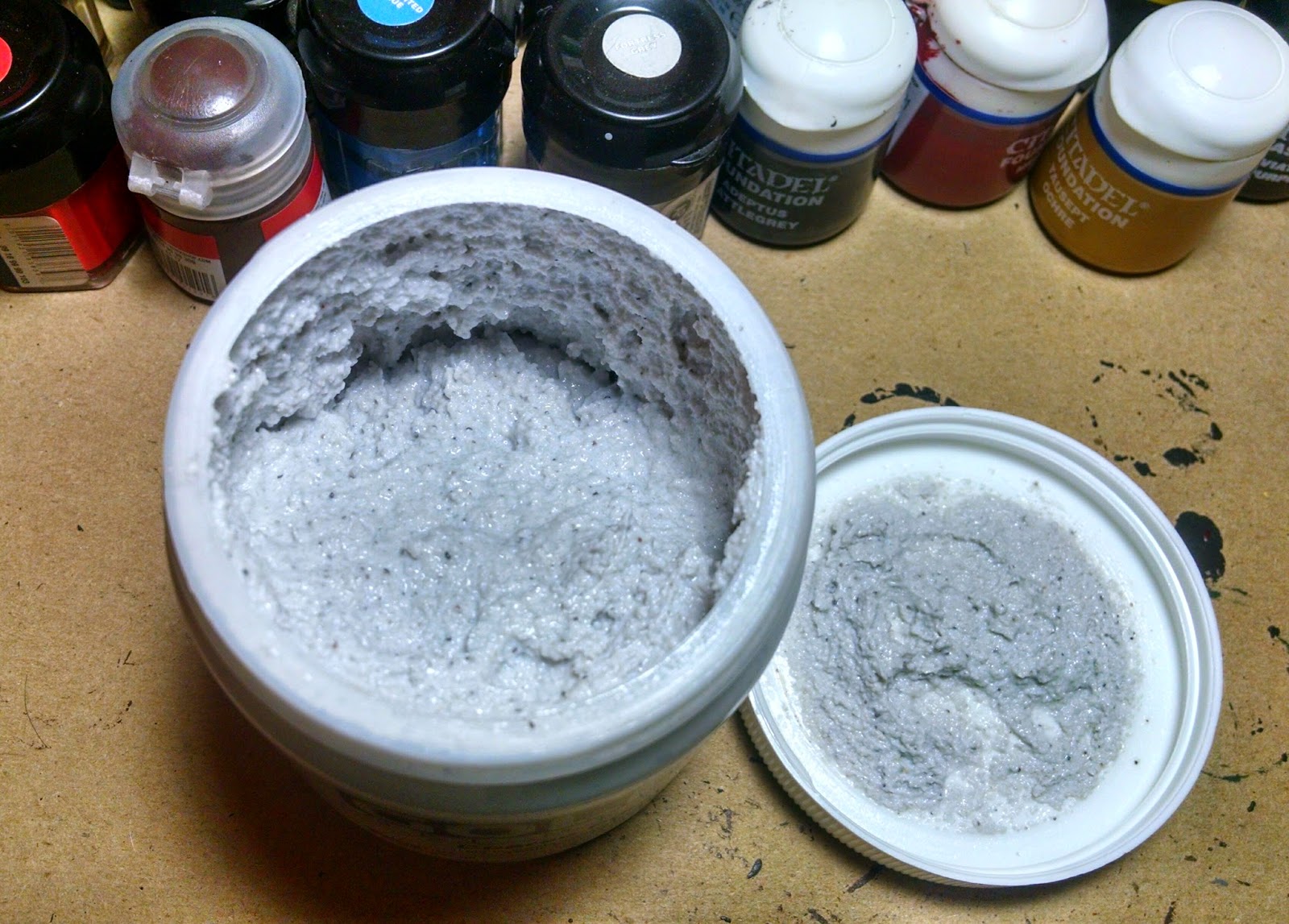 It comes as a fairly thick goopy paste. It is better applied with a small sculpting tool than a brush, since it needs to be spread and the texture will kill brushes pretty quickly. It still has some drying time but after about an hour it looks like this: 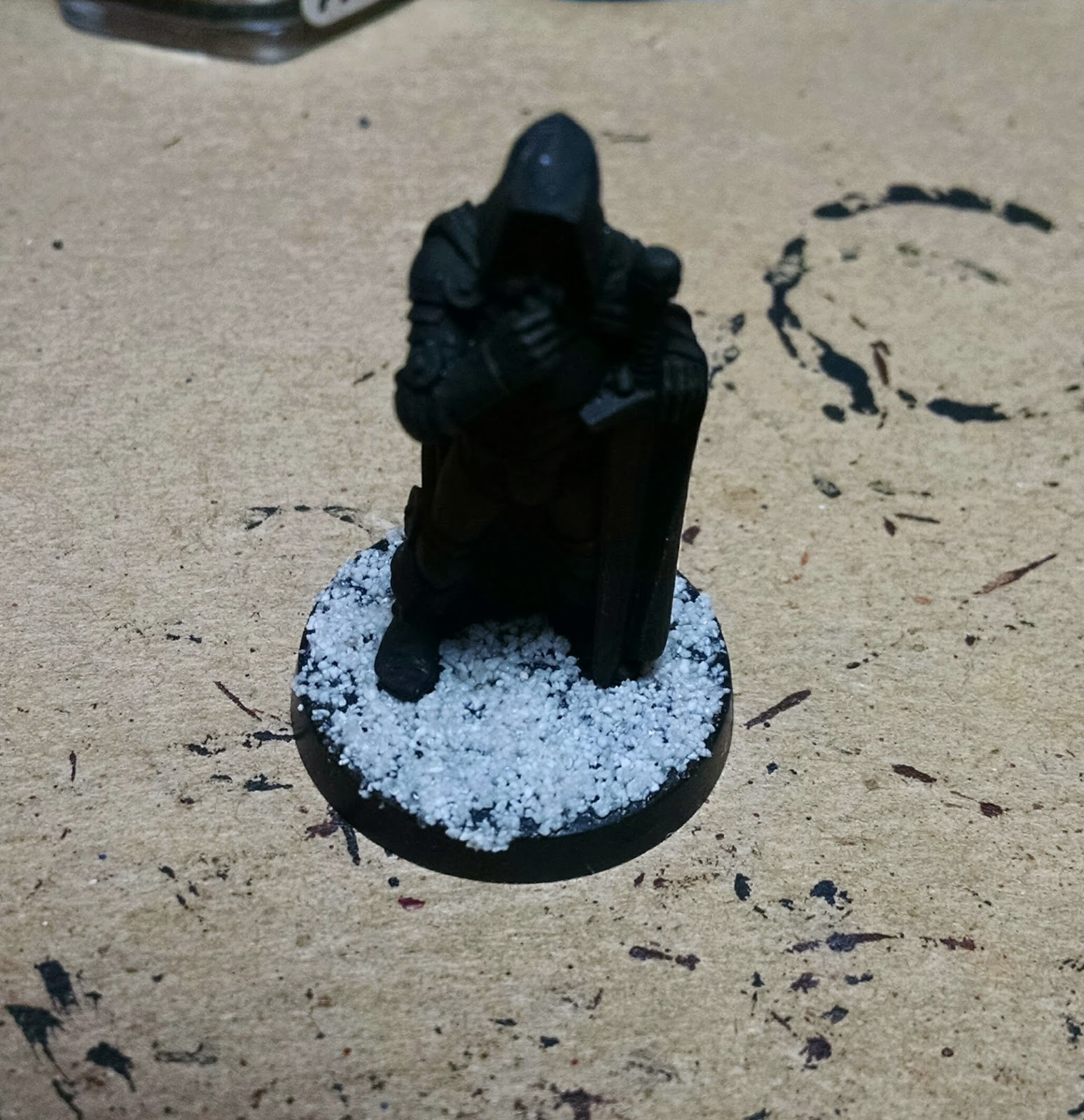 The medium shrinks up and leaves all of the nice grit detail fully visible. It also dries firm, but not rock hard. None of the grit falls out when painted and it doesn't require any sealing before painting. In fact, since it is a medium, it readily sucks up paint and covers up very well. You get a nice evenly covered base that is solid and easy to work with. It also can be built up or used to fill gaps in rocky pieces if you so choose. I recently used it to add some diseased areas to some Nurgle BFG ships I intend to paint "someday". 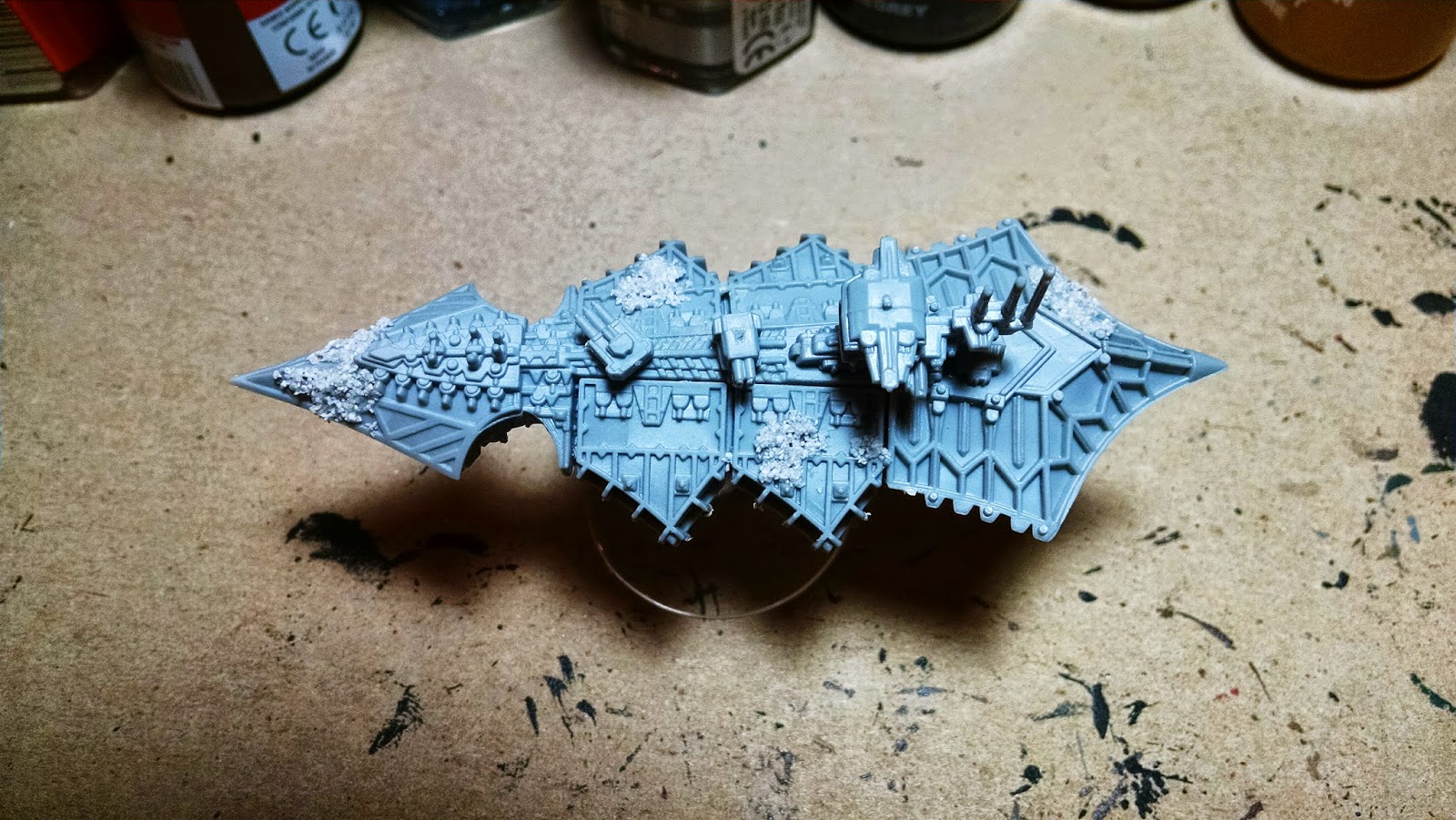 It really has a lot of great applications.

For comparison, let's look at some of my bases in various forms: 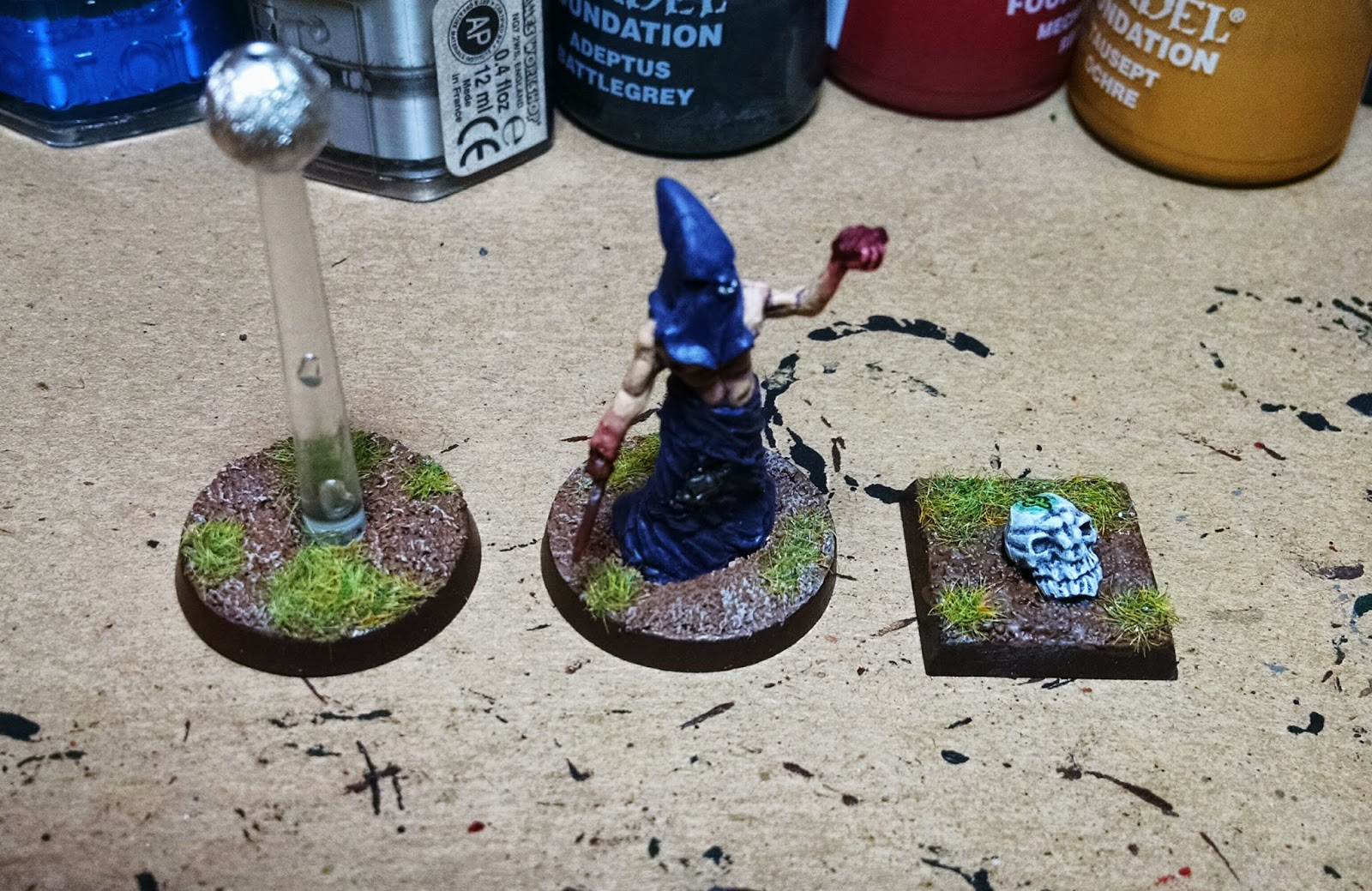 On the left we have our pumice gel, the middle is sand, and the right is Games Workshop Stirland Mud, which I bought in fit of masochism. They are all painted and static grassed in exactly the same manner. As you can see, the pumice gel looks almost identical to sand and S-Mud, but with about half the hassle of sand.

S-Mud, by the way, is essentially the same as the pumice gel, but with color already added and approximately 8 times more expensive (Golden is about $1.25 an oz and GW charges $4.00 for 0.4 oz, or $10 per oz). The grit is also smaller, so I had to add a wash step to painting and the drybrushing isn't as pronounced. It also only lets you skip one step in the process. I really can't recommend the stuff. I'm glad I only invested in one bottle.

I'm in love with the pumice gel though. The biggest drawback I could see is maybe trying to base an entire army at once. That could get tedious really quickly and the drying/sealing time of sand could be a nice break. But for someone like me that only paints a few miniatures at a time, it's a godsend. If you can find some, you should definitely pick some up.

That's it for now, fellow gamers. Happy gaming!
Posted by TheUndergroundLair at 11:10 AM