December has been hectic as always so here I am posting at the end of the month, trying to say I made posts monthly in 2014. I'm still 4 days away from the new year, so I think it still counts. Anyway, I do have a purpose for this post beyond just shoring up the numbers. And to that point I just have five words for you:

That's a pretty exciting string of words right there. At least three of those words are my favorite things ever. And while I'm not the biggest fan of the western genre, I can appreciate a good gunfight. Moreover, I do enjoy WEIRD west stuff, so what I'm about to show you has me pretty excited.

That's right, my FLGS got in the retail version of Shadows of Brimstone! Right before Christmas I snatched one up as an early gift to myself. There are actually two base sets for the game, one set in a mine and the other in a swamp. I felt the mine was more western-y, so I got that one, but each set has different classes of character in it and I really want the preacher. I hope they put out a preacher add-on pack someday because I don't really want to pay $60-$85 (depending on where I buy it) for a guy in black frock.

Anyway, here you can see the back of the box with all its pretty pictures: 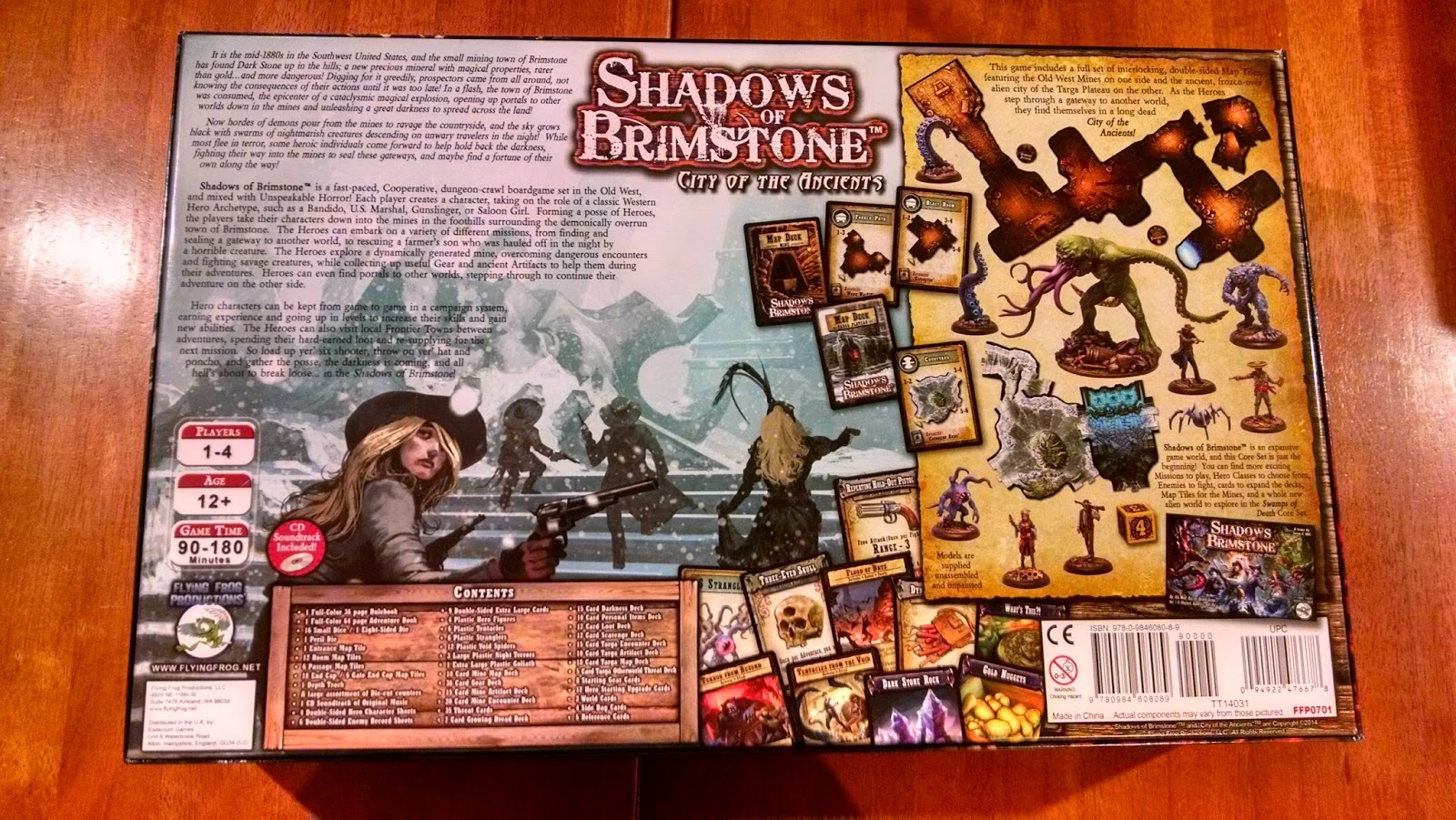 Opening it up, you get to see the sprues of plastic minis, all wrapped up in their baggies: 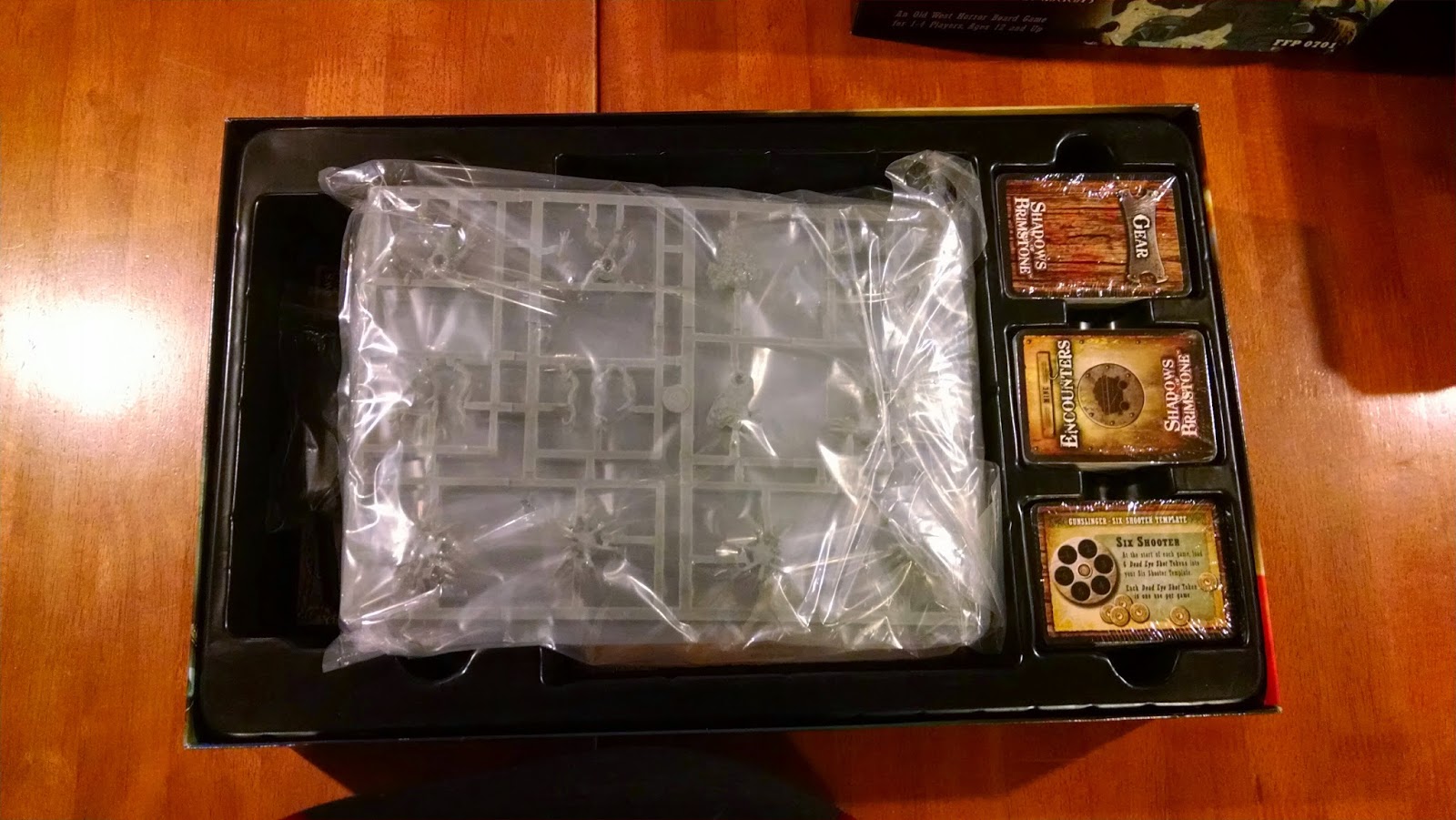 The sprue minis are interesting to me because this is Flying Frog Productions' first foray into more hobby-style miniatures. FFP's other games have more traditional board game minis: soft plastic, low detail and pre-assembled. But more on that later...

You can also see the card decks, and below the minis we have the rule books and game sheets: 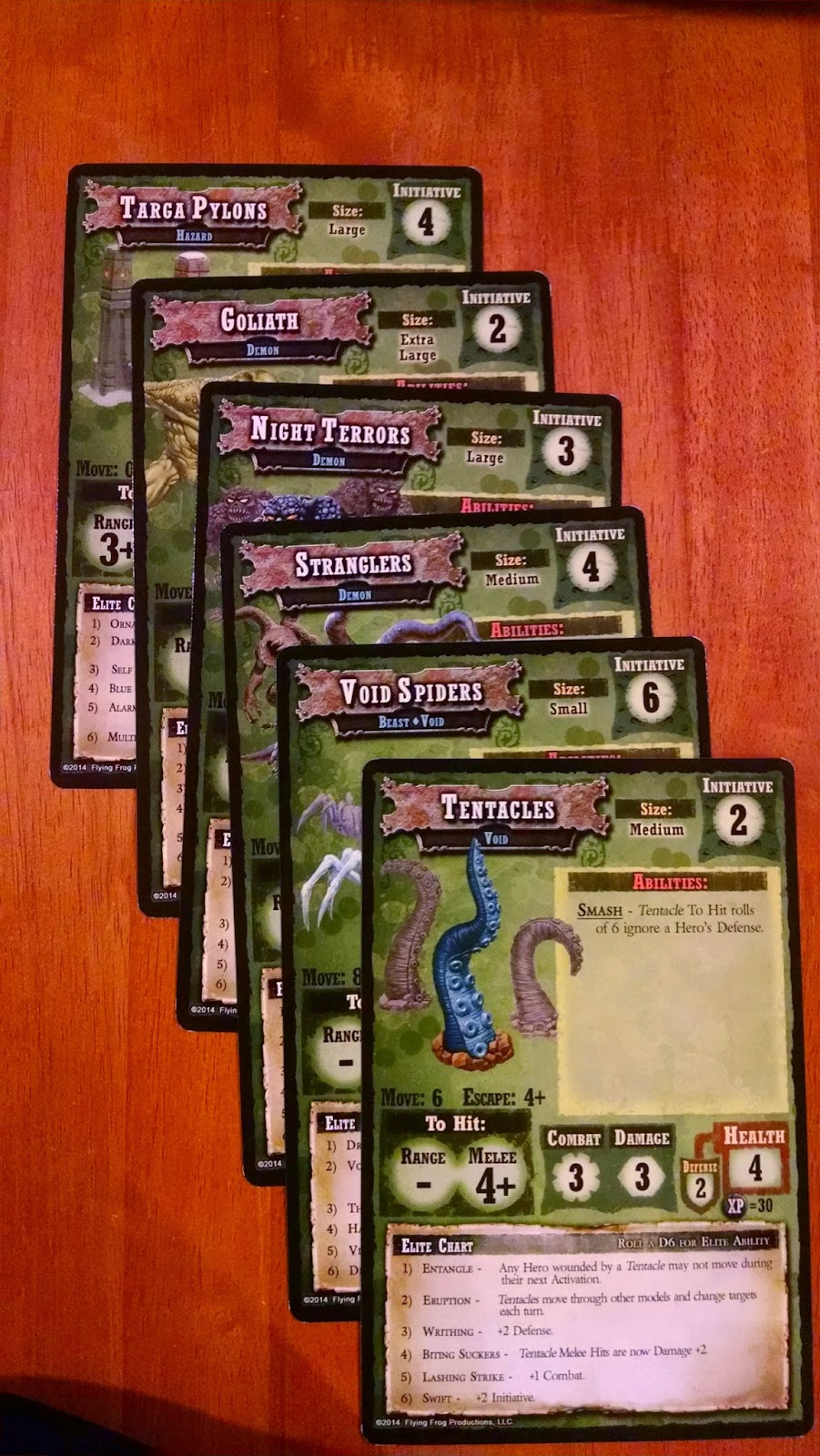 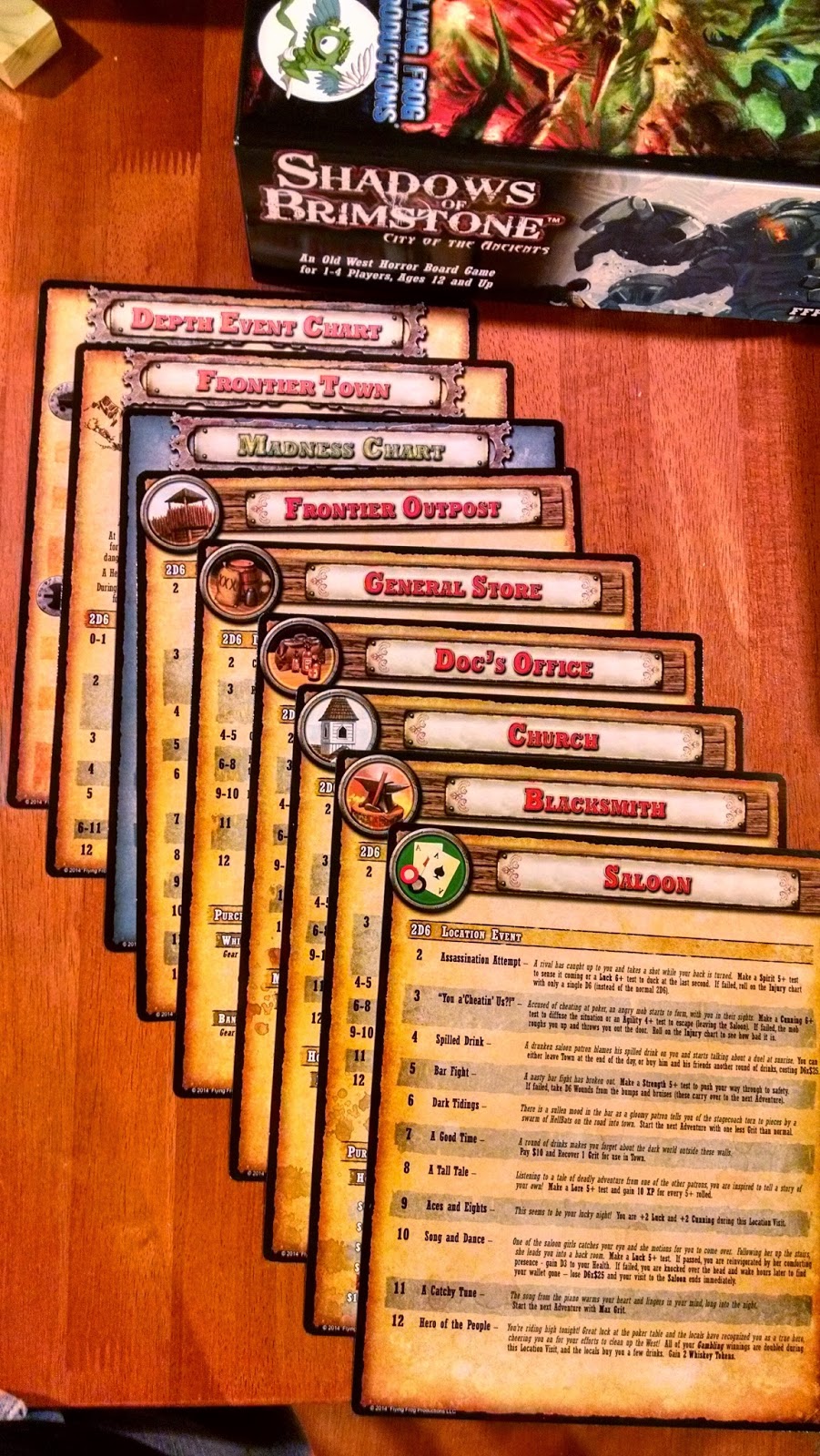 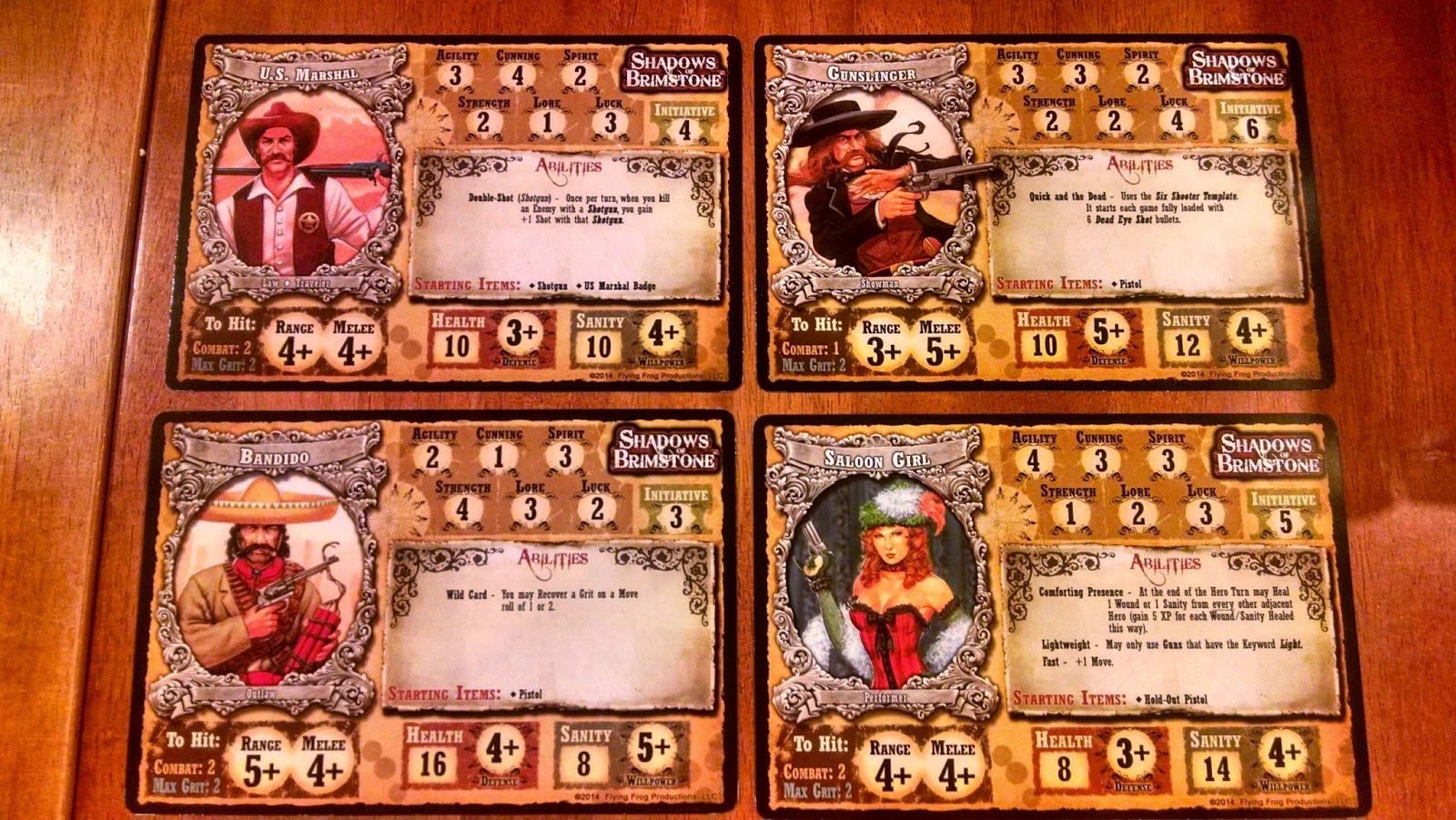 As you can see there are four classes included, and the back side of each sheet has the gender-swapped version of the same name on the back, except for the Saloon Girl. Her male counterpart is called the Piano Player. But then maybe I'm not so sure... 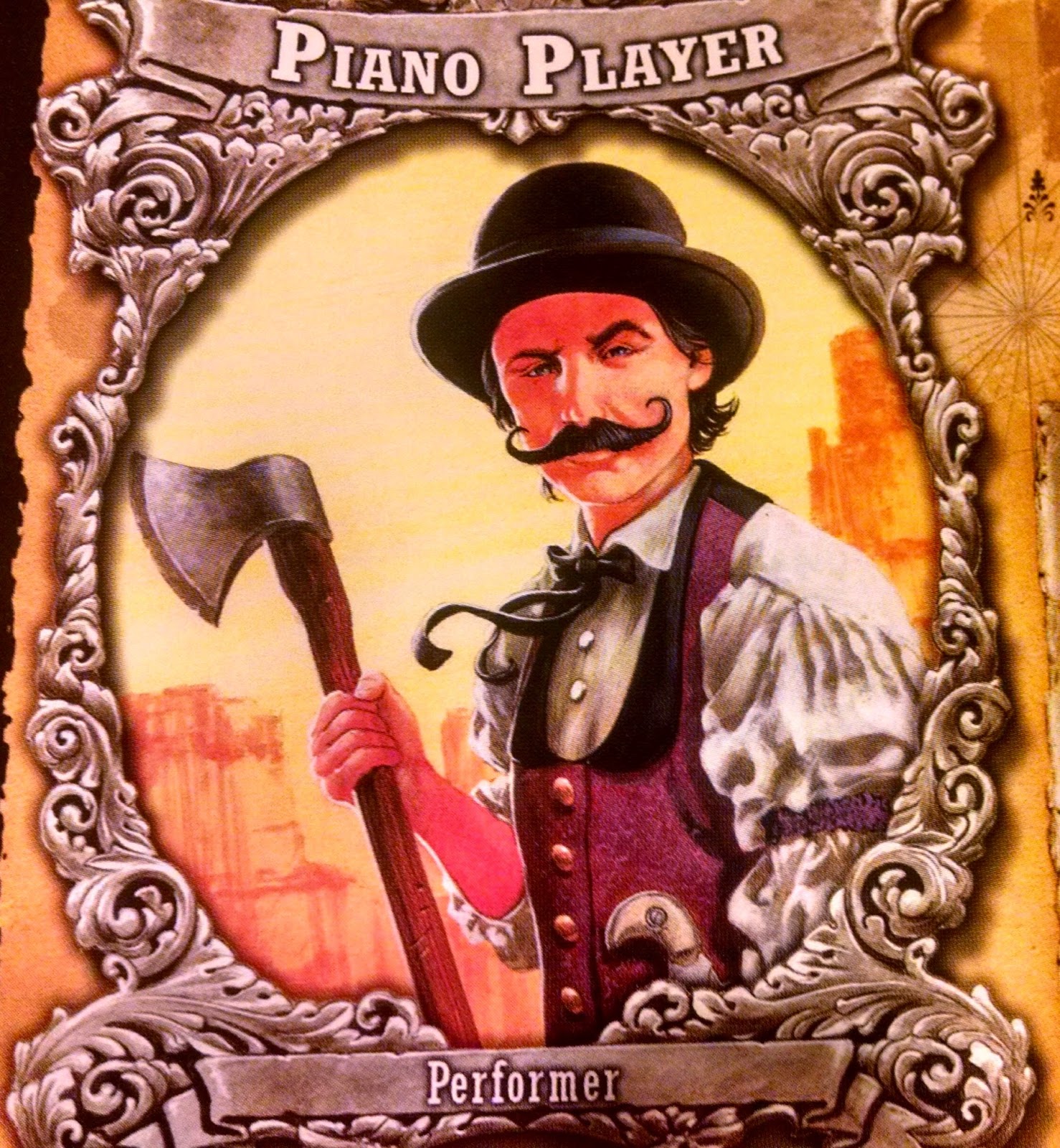 Yep, the Piano Player is totally a woman in drag. Which makes sense. No self-respecting gunfighter is going to take a painted working girl into a monster battle. So she's gotta slap on a fake mustache to get in on the action. Or maybe he's just a really effeminate guy who turns out to be a total hard-ass when the tentacles hit the fan. Either way, I chuckled.

Under the sheets and cards we find bases, one of FFP's famous game soundtracks and dice: 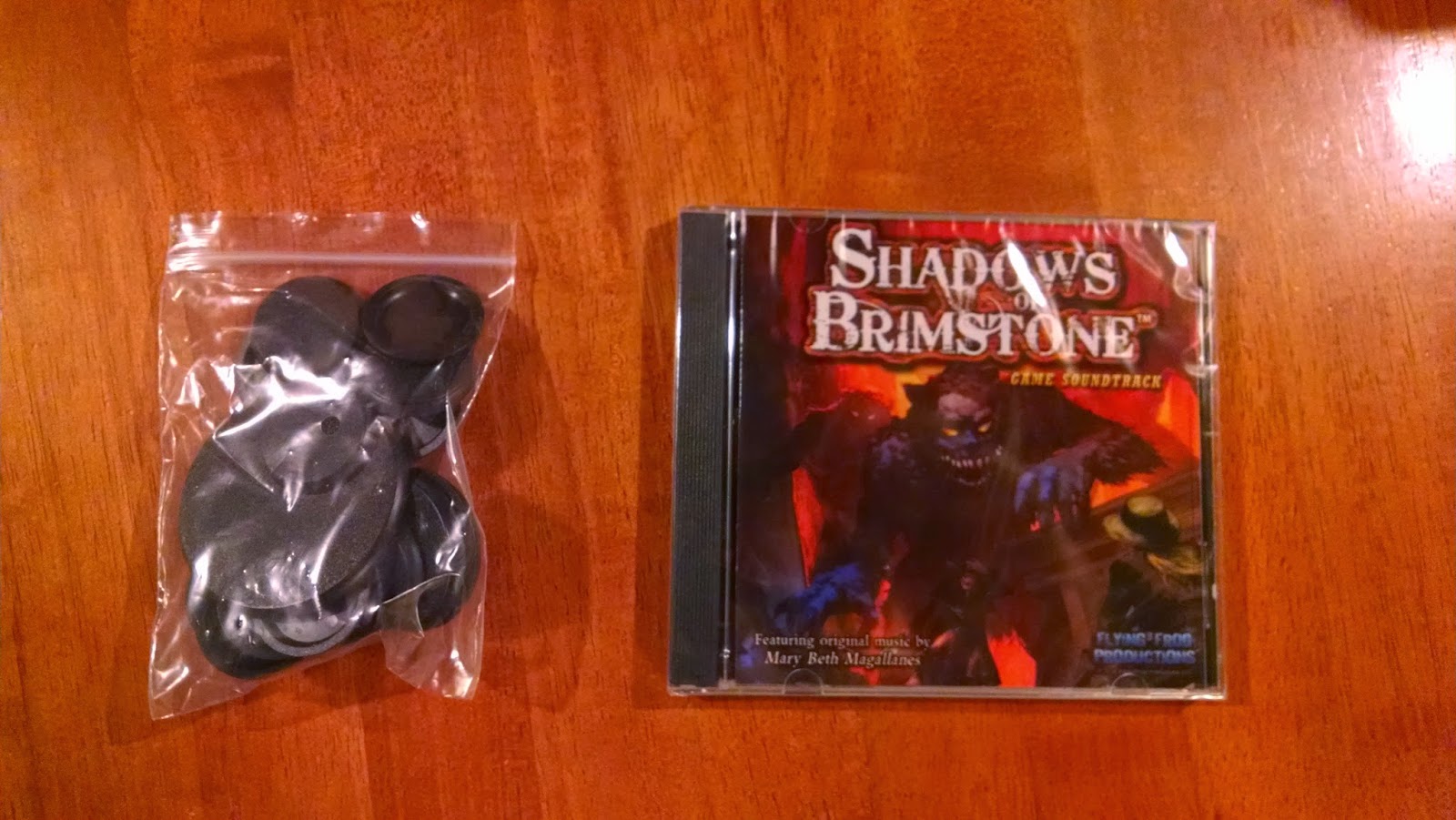 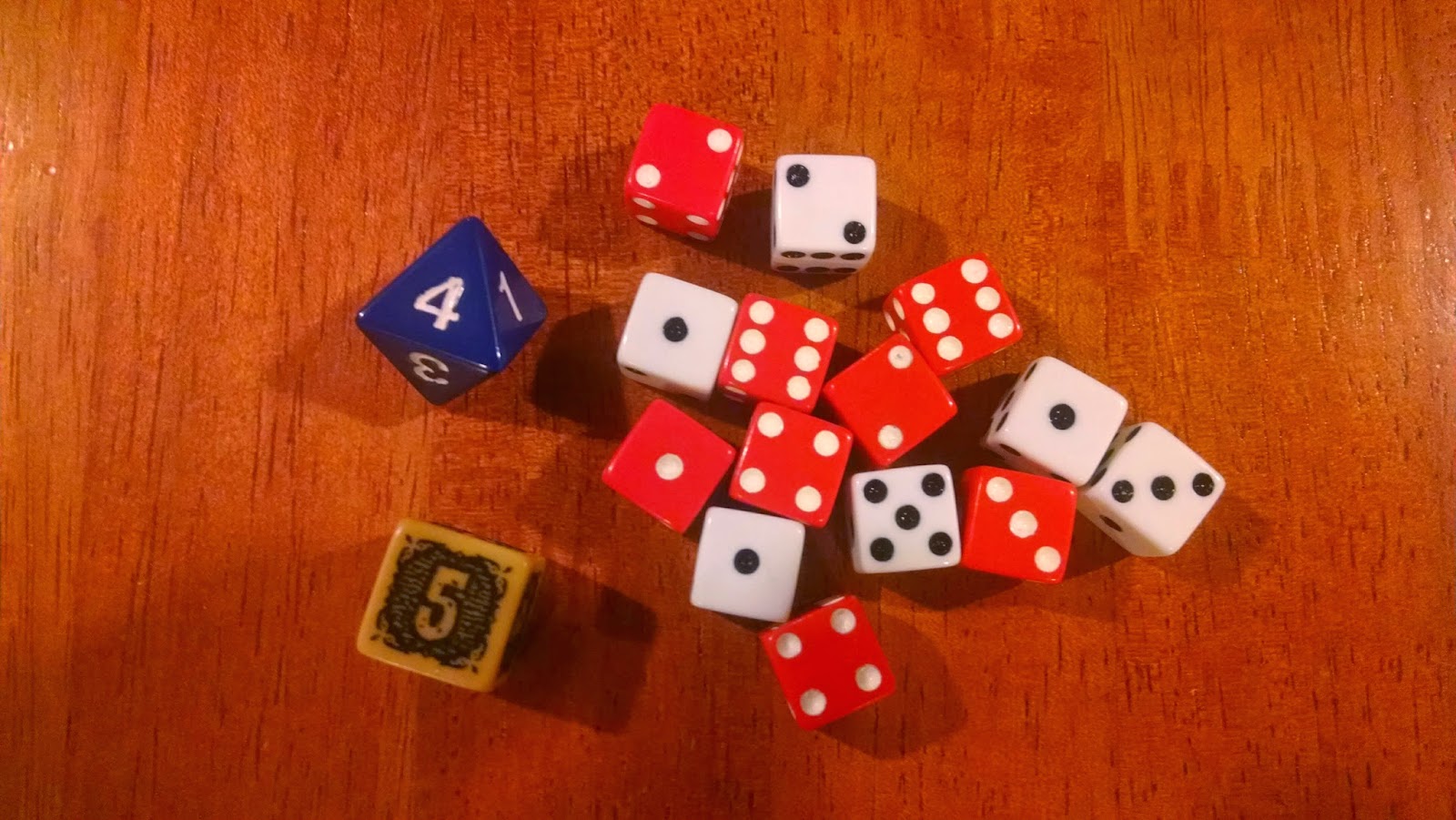 That yellow die is the Peril die and is used to generate the number of monsters that appear in some encounters. Its faces number 3, 3, 4, 4, 5 and 6, so you can see tons of monsters pop out if you're made to roll it more than once.  It's also nice to see an eight-sider in there because those are rare in games that aren't based on D&D.

Lifting up the insert shows us the sheets of tiles and counters: 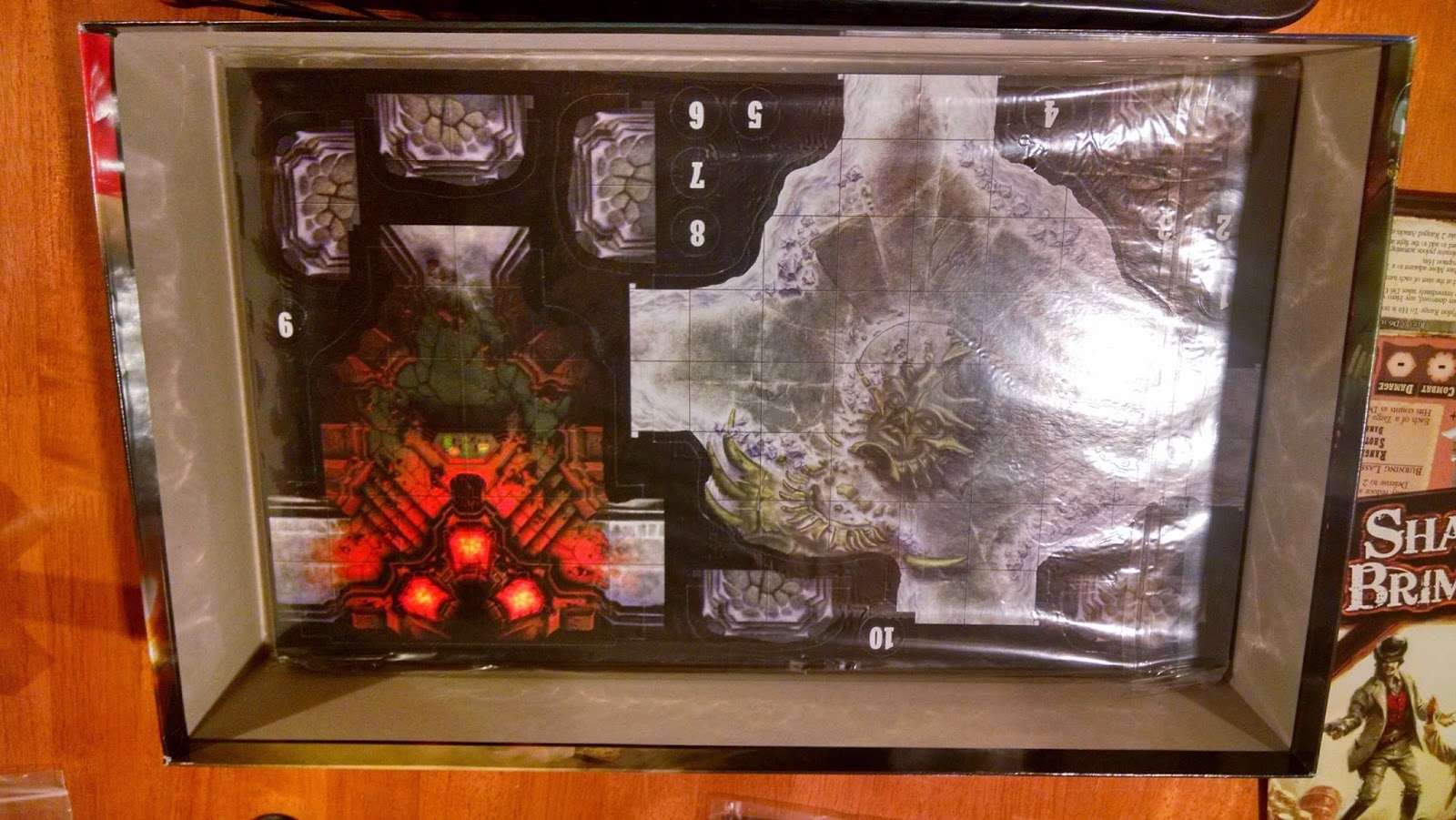 Punching out these leaves you with something that looks like this: 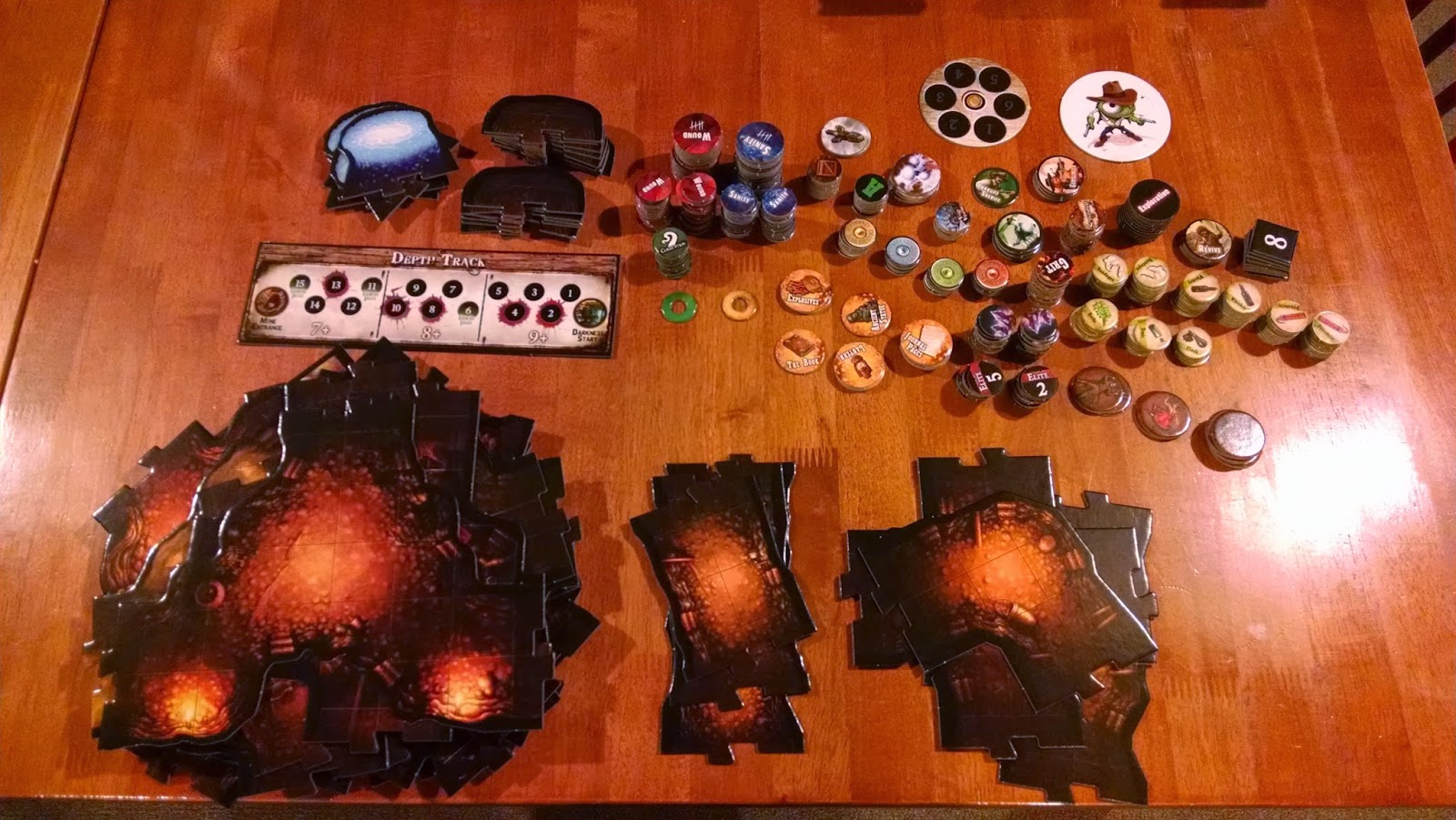 Yep each of those stacks of counters is a single type of counter, excepting when there were so many I had to make double stacks for the ones they includes ridiculous amounts of. May God have mercy upon your baggie supply.

Speaking of which, those three card decks you saw earlier? That was a lie: 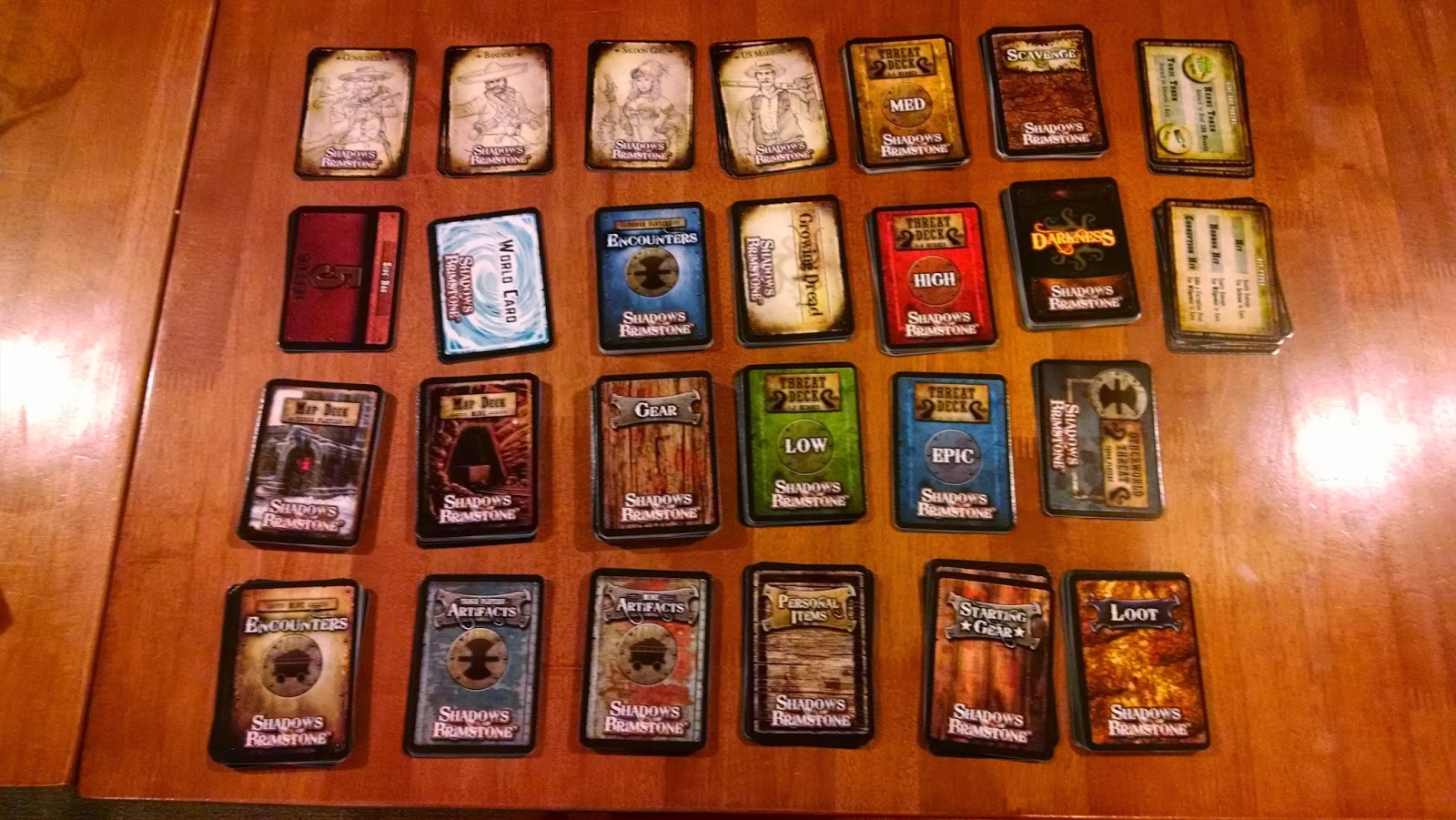 Those decks break down into tons of tiny decks that you use all of to play the game. All of them. You might end up not using a deck simply because you didn't draw the right cards, but the chance still exists that you might need to draw from it, so shuffle all of those cards. Every. Game.

Back to the tiles, all of them are jigsaw ended so they stay together, and double-sided for when you travel through gates to other dimensions. They look very pretty when put together: 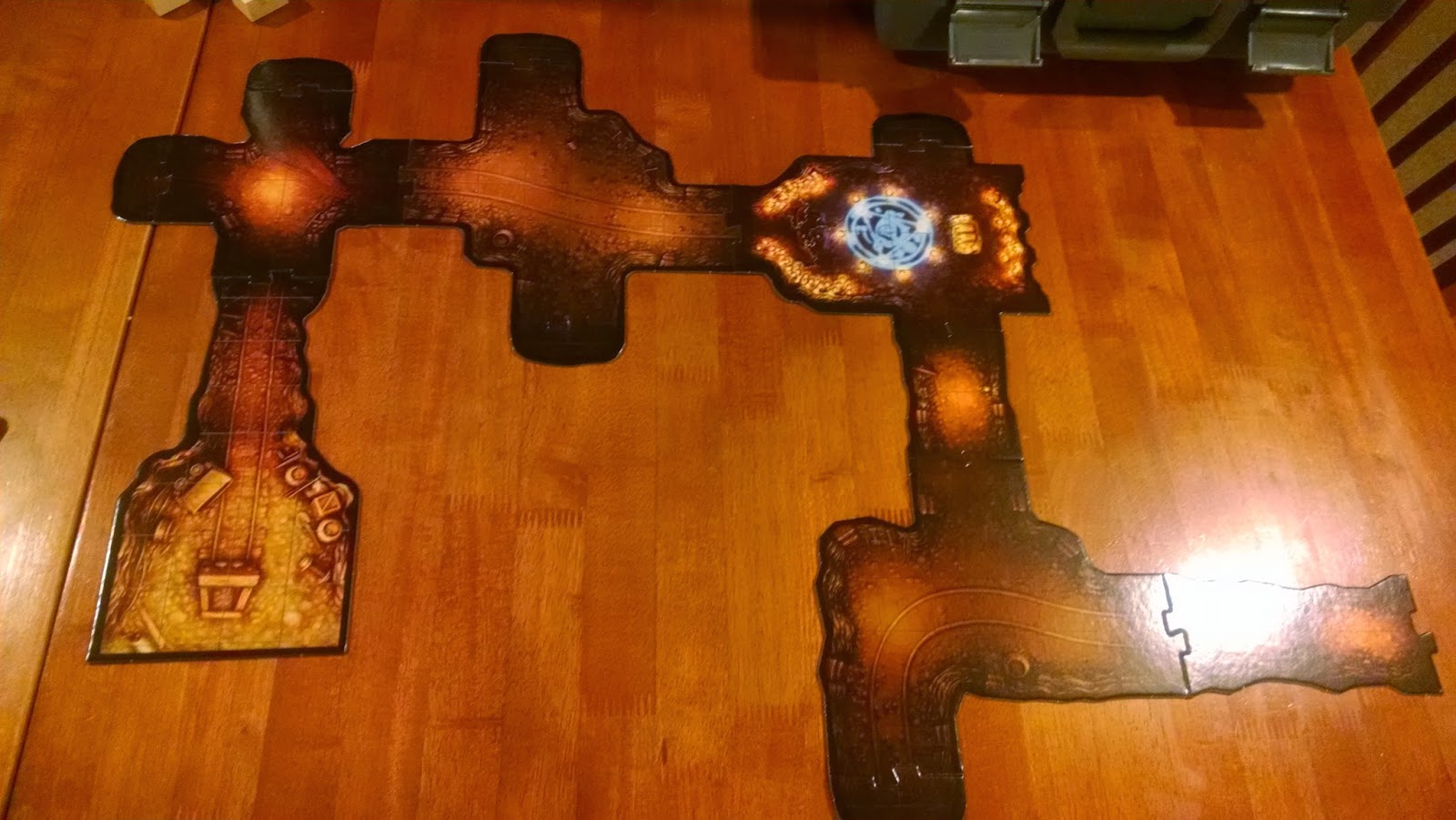 I set about assembling the miniatures, which could have been easier. Flying Frog really tried to produce good, multi-part miniatures, but their inexperience shows through. They weren't the worst I've had to put together, but the combination of lack of instructions, poor sprue vent placement and odd piece keys (with sprue vents poorly placed on them) made it slow going. Luckily I had a little help:

Eventually I ended up with these nasty critters: 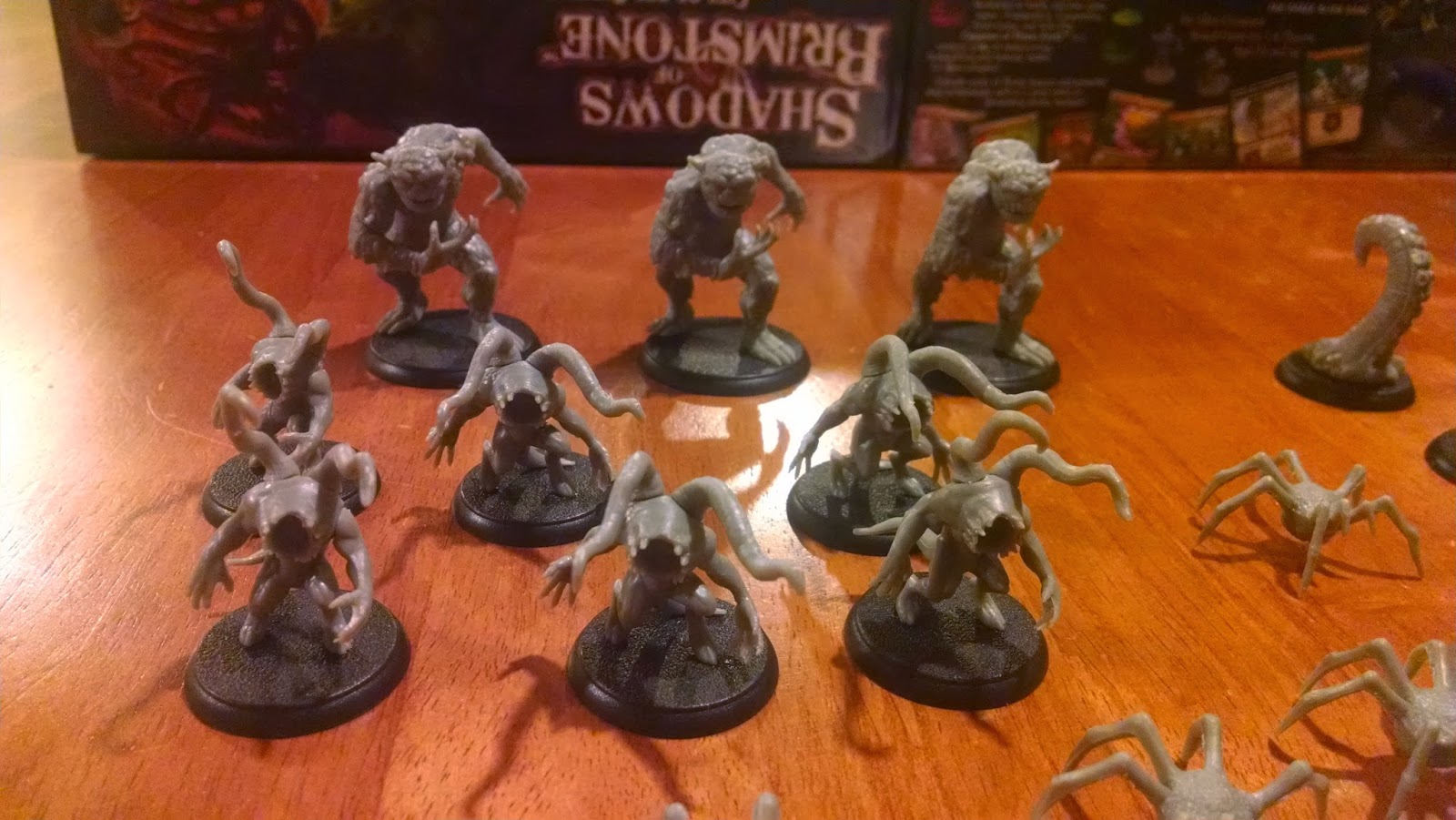 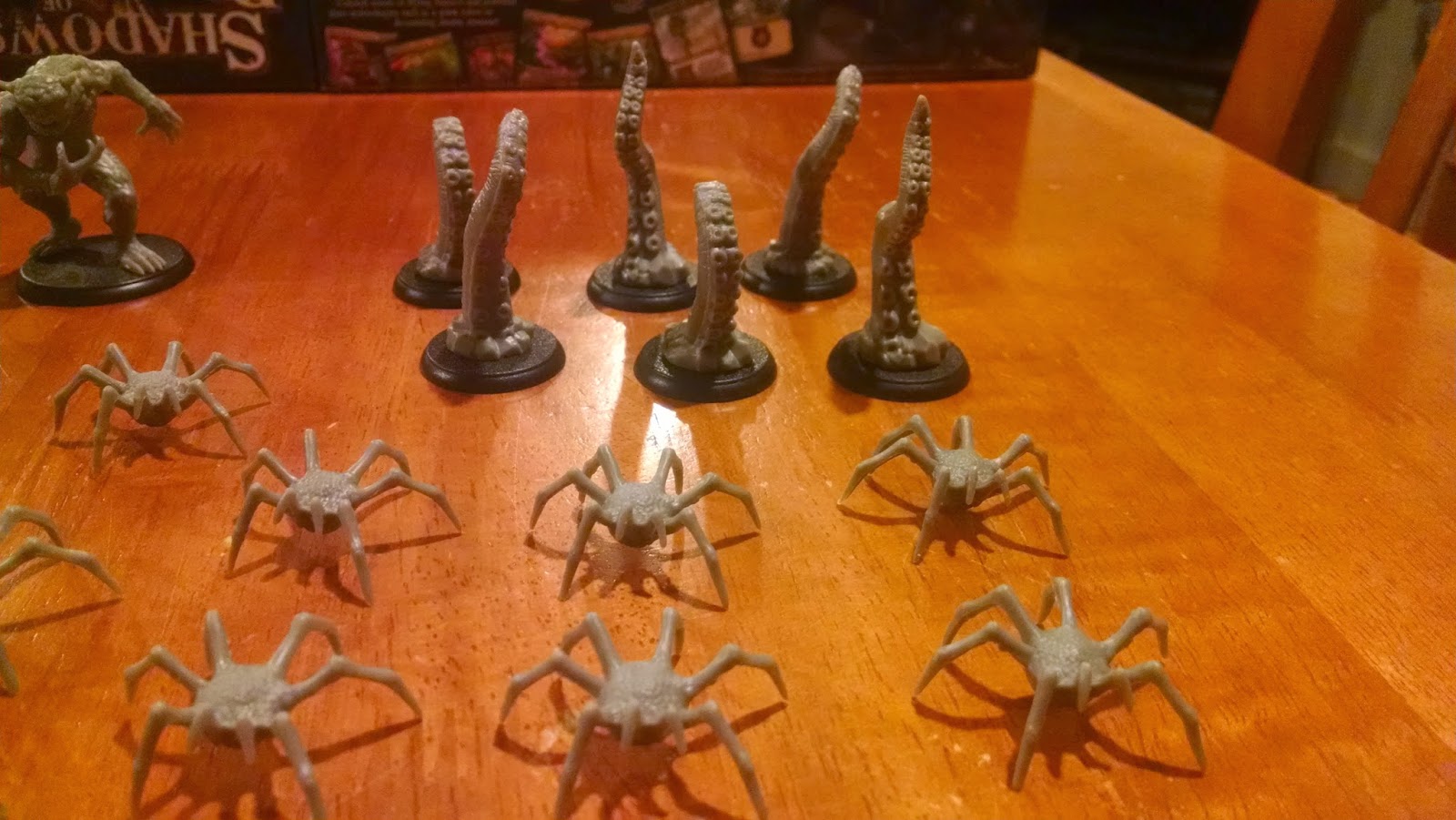 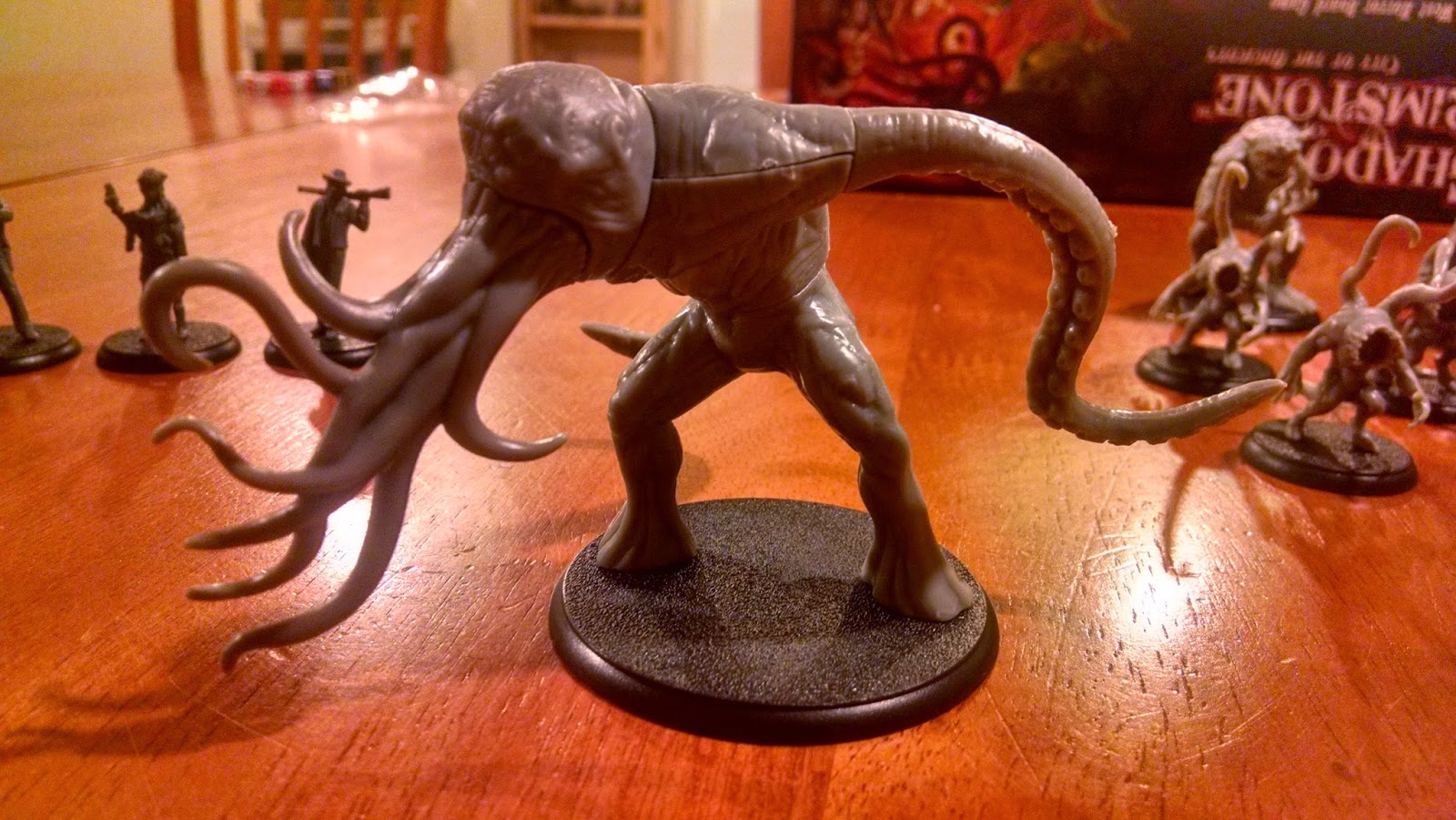 And the intrepid heroes: 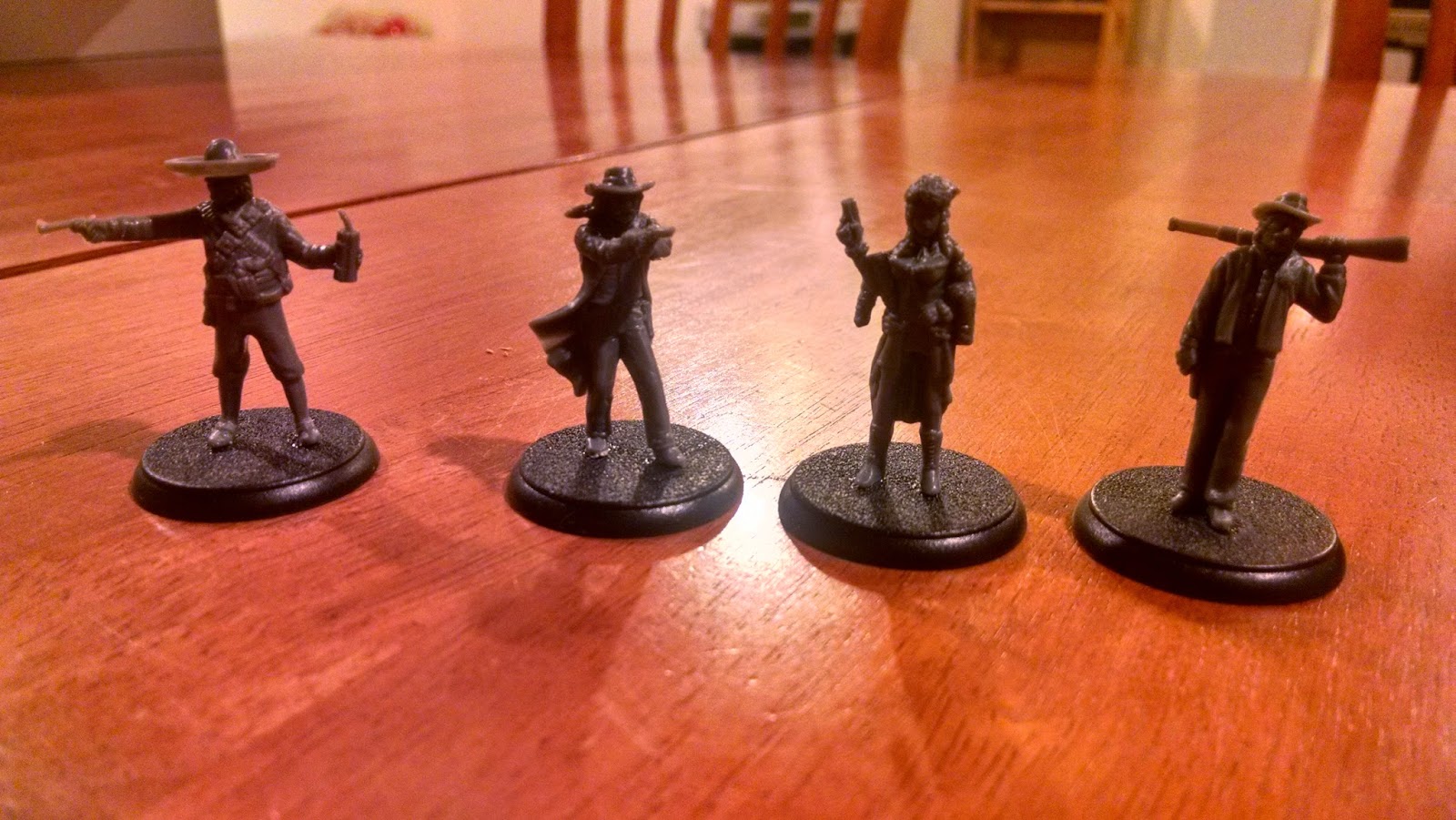 Now these are all nice minis, but they really could have been soft plastic board game minis. The details are already a bit soft and most of them are reasonably simple models that could have been single-piece cast. I know that FFP want's to push this game as a "hobby system" rather than a simple board game, but they ended up with minis that are neither showpiece quality or easy to get playing with right away. It was a nice try but I think they will alienate pure board game players and miniatures gamers will just supply replacement pieces from other companies that are higher quality.

That said, there is a great game in this box. The rulebook is a little scattered but the info is all there, and BoardGameGeek has an extremely useful rules reference sheet to help get you headed in the right direction. It plays well solo, and scales for between 1 and 6 characters, providing you have the other core to expand past four.

It plays as a pretty simple "place next tile and fight the monsters there" exploration game, similar to Warhammer Quest of old. There are 12 or so scenarios with special rules to make each different and a system of experience to have your character progress from game to game. You can even take trips into town for more adventures. With skills, gear, artifacts, mutations and stat increases, each character quickly becomes unique over the course of a few games.

I got to play an extremely short first game, subbing in Mick Francis for the gunslinger so I could have a pretty painted mini. 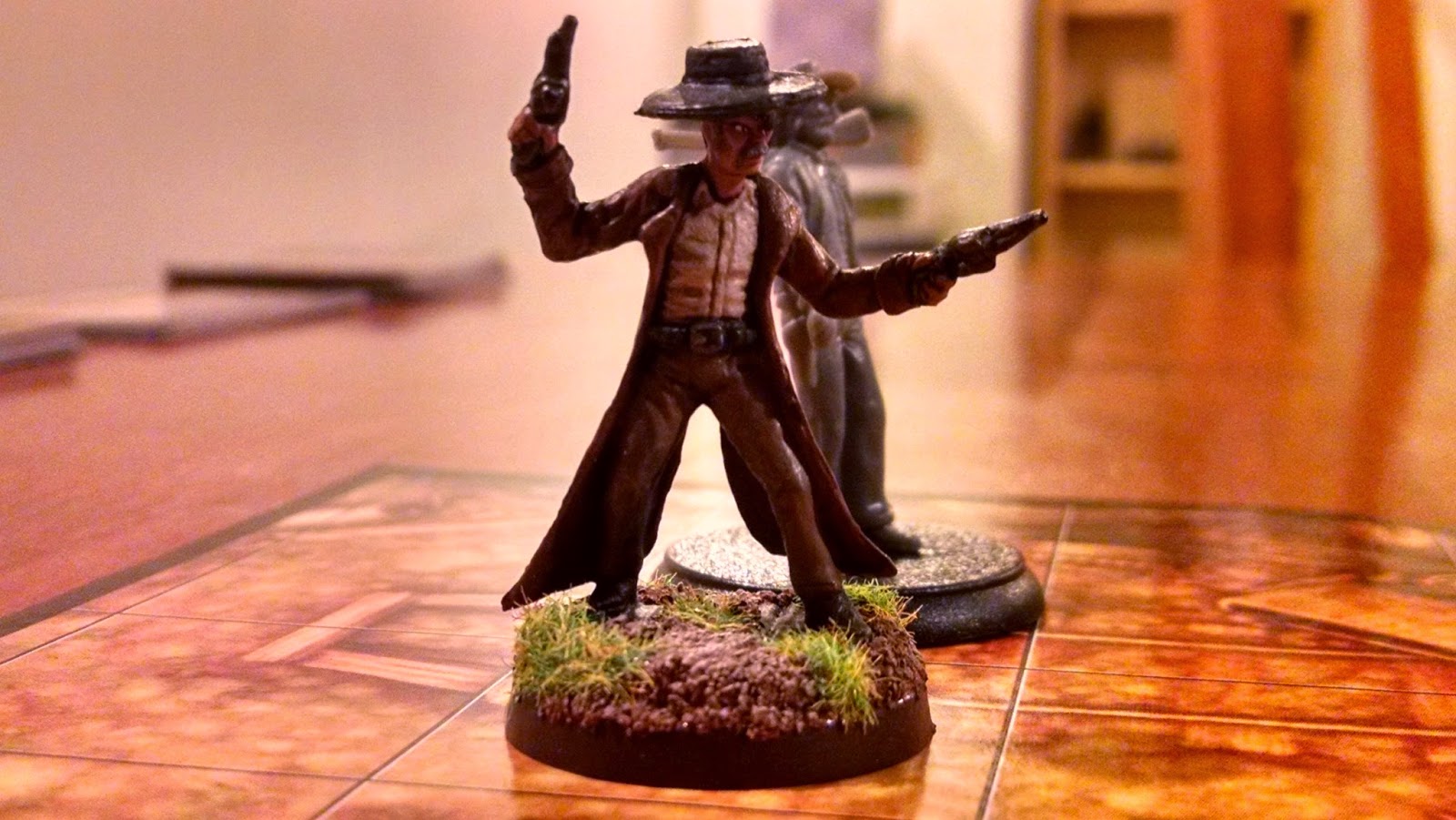 As you can see, the game takes up a pretty large space... 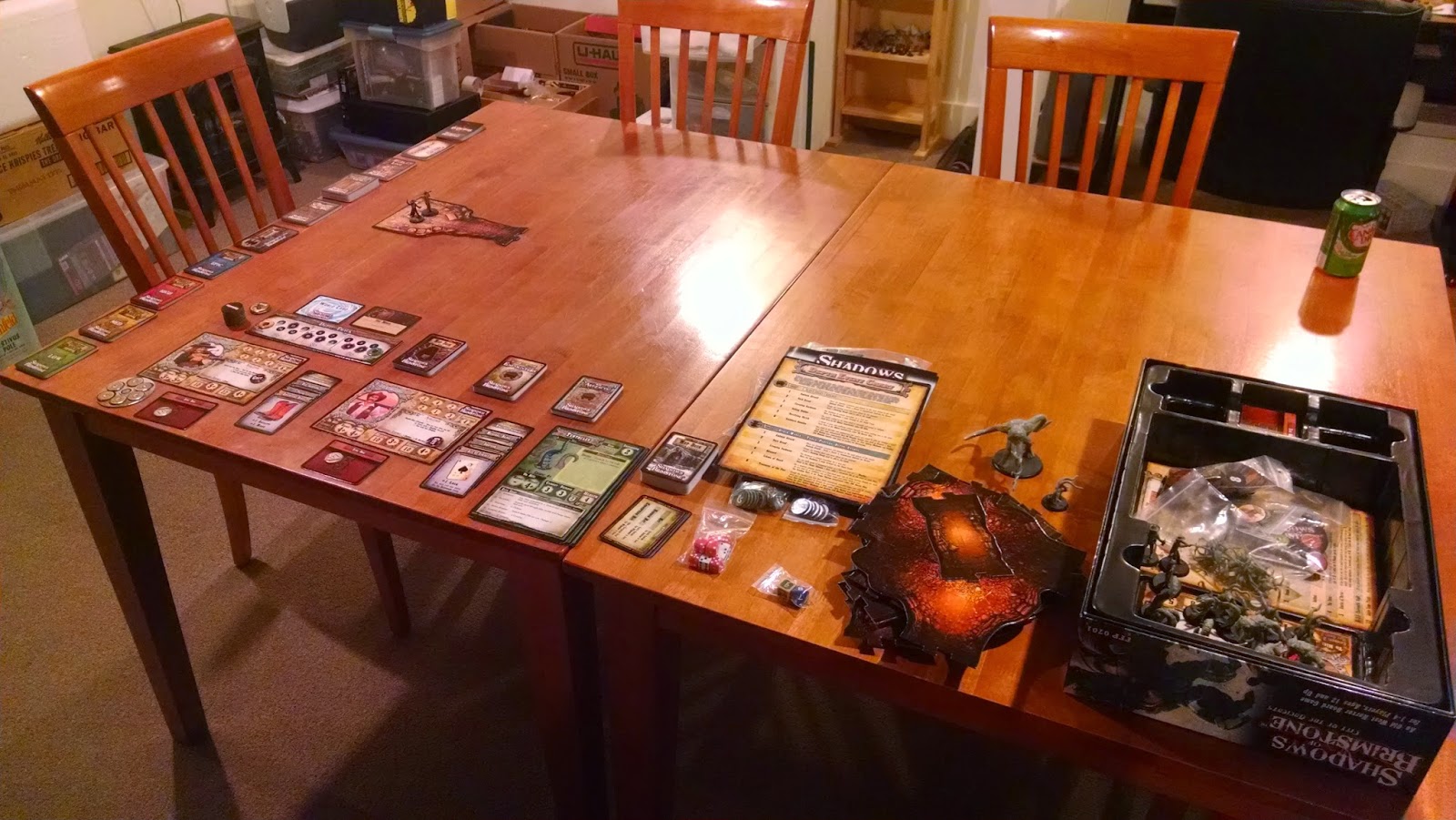 And after only two rooms, I hit the objective. Don't worry, I still had plenty of monsters to fight.

All in all, it was a blast, and I imagine longer games would be even more fun. Mick and the unnamed marshal have enough experience to level, so I'm sure I'll be planning another game soon. If you like westerns with monsters and exploration, you won't be disappointed if you pick this up.