This is a reasonably historic post because two things are happening for the first time here:

The miniature I chose was a gunslinger, who looked like he'd fit in perfectly with some 1920s Cthulhu Mythos investigators acting as some extra muscle for those candy-ass, four-eyed bookworms with all their scrolls and whatnot. I don't actually have my copy of Strange Aeons yet, but I feel confident I will find a place for him. 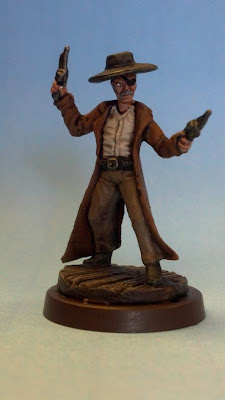 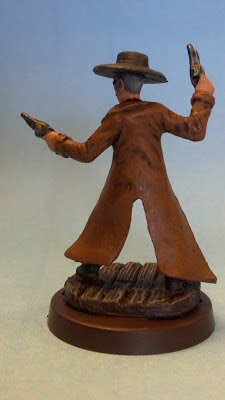 I am quite pleased with how he turned out. I am used to painting fantasy and sci-fi miniatures with bright colors and plenty of detail This more simplistic miniature with naturalistic tones was a minor challenge in that I had to create variation among various shade of grey/brown.

Given that he bears more than a passing resemblance to NCIS's Muse Watson, I chose to name him Mick Francis. I imagine him as a tough, no-nonsense gunman, a former law-man whose chance encounter with strange creatures from beyond got him recruited to Threshold. Gruff and direct, he isn't suited for a leadership role, but his fighting skills are invaluable when things go South (as they often do in his line of work).

As far as working with a Bones figure for the first time, I have to say I'm impressed. The figure was one of the lucky, unwarped ones, so no reposing was required. It took both paint and primer easily, without having to be washed  first. Though flexible, the paint doesn't seem to crack, so it should be pretty durable.

I only have two complaints about the material so far. The first is that the Bones-ification process seems to cause a fair bit of softening of the detail:

It's not bad, but it is enough that I had a hard time not making the figure look like a D&D pre-paint repaint (and I'm not entirely sure I succeeded). The second is that mold lines are a real pain. While not excessive, the material can't really be scraped off like metal or hard plastic. Instead, you sort of have to carefully filet it off. I have difficulties enough with regular mold lines, so I left them on. That also doesn't help the pre-paint feel.

So there you have it. I still have 11 days until I receive my SA books and Mike here can go on adventures, but I'm glad he'll be ready for action at the drop of a (10-gallon) hat!