Strange Aeons is the first game where I vowed to paint all my figures before I started playing. I don't know why this is, but I suspect Song of Blades and Heroes is to blame for this. SBH got me into the habit of skirmish style games, where only a handful of figures are needed and having an all painted force was easy to accomplish. After many years of playing with great grey hordes in Warhammer and WH40k, these small, colorful battles were amazing and glorious.

So when my SA figures were in hand and I only had 6 or 7 to paint up, I said "This'll be quick. I'll be done in no time." and set to work. I suppose in the grand scheme, less than two months isn't all that much time. I have been known to work on a batch that small or smaller for almost a year. But now I have a cast of heroes, some villains and a few ideas to work with.

I've already introduced my new bad guys, and have lots of other models from years past to use as Lurkers, but my Threshold agents were a totally new thing for me. I've already shown you one from my first Bones experiment, Agent Mick Francis. Now I have the rest of the team painted up and ready to fight extra-dimensional horrors and their servants.

First we have the team's leader, Agent Ashton Clarke. Born and raised in Arkham, Mass., Clarke is no stranger to odd happenings and the occult. Though brash and headstrong, he shows a real talent for leadership. Despite his impetuousness, he was promoted because he gets results, even if those results are sometimes acquired through the liberal application of dynamite. 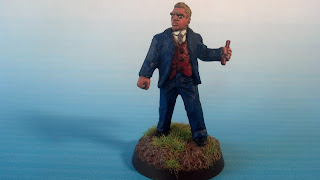 Agent Lucy Shae, a former Providence journalist, is sort of the mascot of the group. She is usually the one asking questions and dealing with people. She is known for her incredible luck, and has often survived where other agents have not by sheer chance. Given Clarke's methods, she seemed a natural fit for his team. 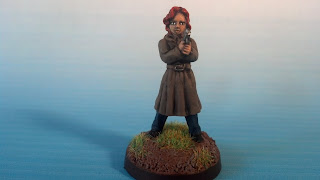 Professor Arthur Haywood is the group's scholar and occult specialist. Also from Arkham, Haywood is cautious and measured, and rarely without a plan of some sort. He counter-balances Clarke's disposition, and though there has been some argument between the two, they are fast friends. Haywood is currently looking to acquire spells for study and eventual use against their foes. 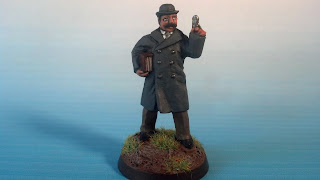 Finally, we have the group shot with Mick. Agent Mick Francis was the former sheriff of Alameda, Texas. After the Alameda Incident, the town was abandoned and Mick inducted into Threshold. Mick never speaks of Alameda, but then he rarely speaks at all. The mysterious silent type, he doesn't go in  much for asking questions and studying books. He remains on the sidelines until his real skills are needed, then enters the fray with six-shooters blazing. 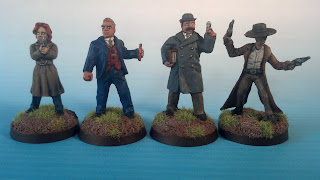 And that's the team. I'm hoping to get my first game of Strange Aeons in soon and I hope to have a report of sorts up to go along with it. I'm incredibly psyched for SA. It meshes my love for little toy soldiers with my obsession with Lovecraft. A better fit for my gaming, I cannot imagine.

Happy gaming!
Posted by TheUndergroundLair at 10:06 AM