I have a terrible track record of getting things painted. I enjoy painting as a hobby, but I am not a very dedicated painter. The thought of painting a whole army of miniatures exactly the same way, all at the same time makes me a little queasy. I tend to flit from project to project, leave some half finished, work on something else and eventually come back to them. If I were to paint any one of my several great grey hordes to a decent standard it would probably take me 20 years.

I guess what I'm saying is I'm lazy.

So, when I bought the models from Hasslefree for this project, it was actually over a year ago. I received them On February 1st, 2012 and promptly primed and base coated them. And then I moved onto something else. I would come back, paint a few things her or there, then work on something else. I finished them 2 days ago. It took me over a year to paint 5 models that should have been done in a week.

So I present to you, Enoch Whately and his family, cultists of Cthulhu:

Of course, being such a big Lovecraft fan, I couldn't let my happy little family get away without a little of their own fiction (warning: some of this is a tad grisly).

Looking up, the starry sky was ringed by leaves, the circle of the clearing in which he stood. Enoch Whately gazed out into the darkness, the moon itself hidden away by the forest around him. It would not be witness to what happened here tonight.

He dropped his gaze to the stone before him, a massive piece of rock that had stood on this land long before the Whately family had settled these parts some seven generations ago. And it had always borne the same sinister countenance that leered back at him now. Squat and humanoid, it sat with clawed hands on drawn up knees, its bat-like wings folded. The surface was weathered and pitted, but scales could clearly be made out across the skin. But most odd was its round, dead-eyed face which had a cluster of tentacles where the mouth should be, as if some great cephalopod had taken up residence on its shoulders.

Looking to his right he saw his wife, Patience, hooded and robed in purple, holding the brazier to light their work. The sickly green flame that flickered there gave the clearing an eldritch pall. Scanning around her saw his three sons, Barney, Zeke and Jed. Also in purple robes, they droned behind their hoods, intoning the same chant he had once used to assist his father before him.

Finally his eyes dropped to the girl on the ground before him, bound and unclothed as per the rites. She was just barely a woman, maybe fifteen or so years old. Not many people traveled through those parts, but some lost their way in their rush to more civilized areas. He was glad she and her family had come along when they had because the other local families got mighty worked up when one of their own went missing.

The panic was clearly visible in her eyes when he raised the thick-handled knife he held above her. Those same eyes widened when her plunged the blade into her chest, her screaming muffled by her thick gag, though there was no one around to hear. And those eyes went dead as Enoch cut her heart from her chest.

Enoch held the heart up before the stone face, the throes of its last beats sending rivulets of the girl's blood down his arm. Staring into the tentacled face, he began the intonation: 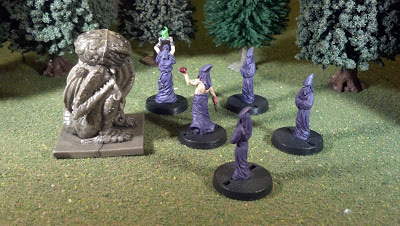 Posted by TheUndergroundLair at 10:42 AM