I have recently come across the most extraordinary thing: A game my wife will play.

Now, my wife is not a gamer. She enjoys mainstream games like Monopoly or Trivial Pursuit, and she did buy the NCIS board game not too long ago for us to play together. I don't mind some of those types of games (except Trivial Pursuit, which I really hate) but I am a hobby gamer. I like games that have strong themes (especially dungeon crawls) or involve miniatures. They don't have to be competitive, but are not her cup of tea because they often involve war, death and mayhem if possible.

However, my wife has come to really enjoy Star Wars. Our first date, in fact, was watching all 6 movies. Since at the time she had only ever seen Episode III, I only have to assume she was really, REALLY attracted to me. It's definitely how I knew she was a keeper.

When I first purchased X-Wing, I made some sort of  offhanded remark about her trying it with me and she said she would. We do this with every game I purchase though and it is an exchange that neither of us follow through with generally. I usually ask in order to include her in the hobby, but I don't really expect it because I know she isn't really into it, and that's ok. I just want to let her know she is welcome but I'm not going to push it. A probably she agrees to make me feel better and show interest, but she knows I'm not going to pester her about it either. She has been really good about trying things though, and there are a couple she will acquiesce to (such as HeroQuest or Magic: The Gathering).

So I was stunned one day when I jokingly suggested playing some X-Wing and she agreed. I was elated! She said the ships looked cool, as well as the new mat I had gotten, plus she liked doing Star Wars things with me.

I set up the game with her playing the Rebels and me with Imperials. We started off with the basic game, her with Luke and I with a couple of TIEs. Obviously we had to put Episode IV on in the background while we played. 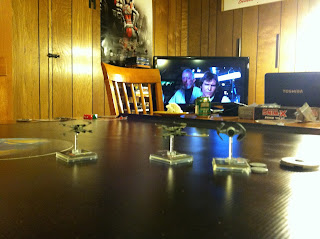 She said it would inspire her better and I'm always up for some fitting music and sound effects. It is possible that it was too inspiring. This was the result:

In the first couple turns she managed to smoke one of my TIEs. I was on the back foot the entire game from there on out. However, she was having a fantastic time. Neither of us was truly used to the movement system yet, so we laughed about how we were always flying the wrong way or bumping into each other. The dice alternately showered us with both love and hate, so our turns were fairly even. Ultimately though, my luck eventually ran out and she won. She loves kicking my ass, so there was much rejoicing.

I was shocked, however when she immediately asked to play again. Moreover, she was not happy with just Luke. She wanted more ships! I responded by giving her Wedge (or "Wedgie" as she has come to call him).

In order to make the points even (and to indulge my need for saying "I have you now!" when I'm tailing an enemy ship) I took Vader. There was some discussion following this choice since what she really meant was "Only I can have more ships." Apparently she was happy getting a Death Star destroying hero if I was going to be stuck with only two TIE fighters. After calmly explaining points values and how awesome X-Wings were, she agreed that I could at least defend myself and we got the second game underway. This time we added some life to the mat with a couple planet templates from Battlefleet Gothic.

With more options on either side, the game was a blast. Vader could never seem to close in on the X-Wings, and though I eventually managed to take out Wedge, when it finally came down to just Luke and Vader, she managed to get the drop on me and blew me outta the sky.

We were having an amazing time. She was getting a good handle on the movement and managing to avoid when I was closing in. She also picked up on fire arcs and target locks like a pro. I am both scared and aroused by this turn of events.

And of course we had to play another game the next night. I was stunned when she actually requested another game of her own volition after the fact. That is actually something that has never happened with any game we have ever played, even the mainstream ones. Usually I request playing a game and then she chooses one of those or acquiesces to my choice. This was like the sighting of a rare white elk only with dice.

So once again we set up the mat with a new planet to fight around and set to work. This time we used a couple of upgrades (R2, torpedoes, missles, etc.) but the lists were basically the same.

Of course it wasn't long until we started taking casualties. In fact, her first shot of the game looked something like this:

We have both had a blast so far and I can't wait for a re-match. Unfortunately I have been distracted  by other games and the holidays took up all of our time after out last game. Hopefully we will be able to squeeze in some games now that we both have more time. I know I am extremely happy to have a game we can both enjoy and that she can share in at least a fraction of my hobby. Even if she pouts every time she loses a ship.

Posted by TheUndergroundLair at 12:16 PM