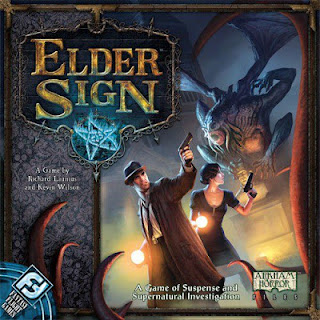 There are few things in this world I enjoy more than the Cthulhu mythos and the works of H.P Lovecraft. The idea of malevolent entities of uknowable power and influence perched on the edge of space and time, waiting for the stars to be right to burst forth into our reality and consume it just speaks to me. Gothic horror wows me because the payoff is longer lasting. Its a creeping dread, rather than a bloody spatter. Lovecraft's work makes me believe that the Great Old Ones exist in a nebulous way I will never truly understand, at once knowing that it is all just fiction and yet there is a niggling feeling in the back of my skull that always asks, "...or is it?"

All of that is why I had to pick up Elder Sign from Fantasy Flight games on theme alone. It is a push your luck dice and card game that can be played by 1-8 players and it is fun. It is very luck based, so sometimes it can be truly challenging, other times frustrating and still others a real cakewalk.


Set inside a museum, there is something breaking free amongst the exhibits and it is up to the investigators to search the museum for clues and powerful Elder Signs that can be used to lock that something away before it devours our world. The cards represent a series of encounters that must be completed by players to gain rewards, done so by rolling the dice included and matching them to tasks on the card. Certain items, spells and clues can be used to alter these rolls and help. Sometimes monsters pop up, adding to or changing tasks and screwing up the players' plans. After each player's turn, the clock advances and every "midnight" changes the field in some way, usually for the worse. If the player's don't find enough Elder Signs to win the game befor the Doom track is filled (by various card effects), the Great Old One breaks free and a battle ensues, usually ending badly for the players.

I have only played the game solo, but I really enjoy it. The theme may color my opinion on it, but I think it executes that theme perfectly. When dealing with unknown horrors, you rarely get what you want, always feel on the back foot and sometimes winning that battle is impossible. And you never truly know what is going to happen. Having randomly determined tasks and results with ways to boost your chance of succeeding really makes that come across. You use your artifact, spell or stick of dynamite, roll the dice and hope for the best. And you can use any advantage you can get because you need it.

You can choose your investigators and the Great Old One you want to fight, but I find that it makes it too easy to find winning combinations. Some investigators can flat out battle certain GOOs head to head. This might make for a great "chosen one" feel once in a while, but it gets boring quick if you can pick it every time. Randomly assigning investigators and GOOs keeps the game fresh and ensures a challenge, in my opinion. I also make the solo game a little harder for myself by not drawing a new investigator if the one I'm using dies, therefore losing the game. This gives a real feeling of being alone against the darkness and speeds up game play a little too.

The game has so many good points and a couple bad ones. Its realatively cheap ($34.99 or less depending on online discounts), stays fresh, beautiful artwork and has great theme. However, games take a pretty long time to resolve (1-2 hours or so) and there are a lot of little rules to remember. The rulebook could use a little better layout as well, and luckily there are several "cheat sheets" (and other great resources) available.

There is only one thing in the game I consider a lost opportunity: no miniatures! I know it would have increased the cost, but some sort of pawn for moving the investigators from card to card would have been nice. They have included tokens, but these are small, flat and fiddly. Given that FFG already produces miniatures for these same investigators (for Arkham Horror and Mansions of Madness, which share the same characters), unpainted versions would have been very cool to play with. Even generic colored pawns, or larger tokens with stands would have helped. I usually use one investigator solo, so I have taken using a small Cthulhu statue from FFG's Bag of Cthulhu they sell. It looks suitably creepy and does the job for me, but it would be hard to use multiples and know whose is whose during multiplayer. I have also taken the liberty of buying an FFG dice bag to use as a monster cup and it makes drawing monsters much easier.

All said, though, I love this game. It is a perfect way to spend a couple hours on a free day off, certainly more engaging than a random movie off the TV. It can be tough, outright brutal, but even when you lose you feel like you've played a game. And you can always try to thwart the Great Old Ones another time. Also, there is a tablet/smart phone version of this game called Elder Sign: Omens available for $4.99. It plays a little different, but is almost as good! Some people prefer it, but I like my doom with a little tactile sensation.


Posted by TheUndergroundLair at 3:54 PM