Ever since I first opened HeroQuest back when I was 11, I have been hooked on dungeon crawling. And ever since I started setting up little model monsters and furniture on its colorful board, I have wanted to have a dungeon as 3D as its inhabitants.

I had heard of Hirst Arts, and then later Dwarven Forge, but my problem was always the same: I was a kid with no money and I couldn't afford the stuff. Even as an adult, the perception that I couldn't afford it continued, despite having good jobs and buying stuff even more expensive over the years. The concept remained my holy grail.

However, recently my wonderful, beautiful fiancee encouraged me to purchase some, with a portion of the cost covered by her as my Valentine's gift. I searched again, finding Hirst Arts (too much work) and Dwarven Forge (very pretty but very expensive) again. Then, amongst my wanderings I found Dungeonstone. It had a similar look to Dwarven Forge, but came unpainted and much cheaper. When I saw the price I ordered the Advanced Set right away. I wanted at least a fair sized dungeon and for $100 (plus $20 in shipping, heavy stuff!) I got about twice what I would get for a similar cost through DF. Granted, I have to paint it, but I see that as a good thing. I want to be able to put my own spin on the dungeon!

It took about a week to arrive and I'm very impressed.  Now for the unboxing! 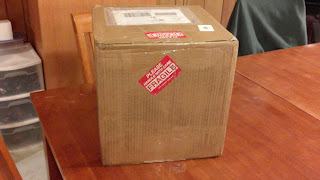 Here is the box as it arrived! Notice the FRAGILE sticker on the side. This is true, but it isn't so fragile as to expect a box of dust to arrive. Fear not, it arrived well packed! 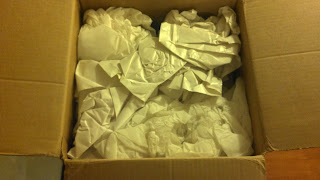 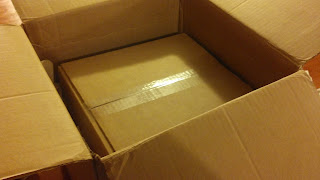 There is a LOT of paper packed inside. The box for the product is packed inside the original with paper to cushion. Do yourself a favor and open the packing box on the floor. The box inside very much weighs the 25 pounds you pay for in shipping and its hard to get leverage from a table top. 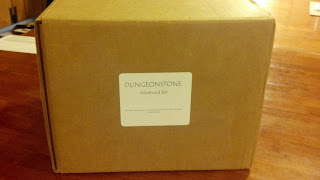 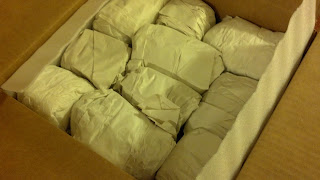 The product box itself is full to the brim with pieces and small sets of individual pieces are wrapped with a couple layers of paper and some foam. All in all this is a great system. The pieces were well protected, though it is time consuming to unwrap. I only had two pieces arrive broken, which were the curved hallway corners. Each piece has a small column that snapped off, but since the material is a sort of resin, a little superglue fixed it instantly! 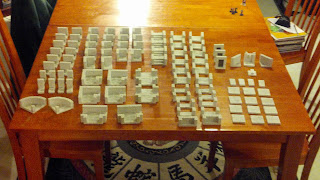 As you can see, you get a LOT of product. That half of the table is a 3'x4' area and it is mostly covered. And if you think that isn't enough to build a good dungeon... 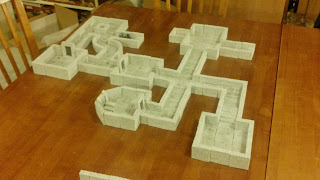 I got a decent 5 regular rooms and squeezed a 6th with creative use of intersection pieces. 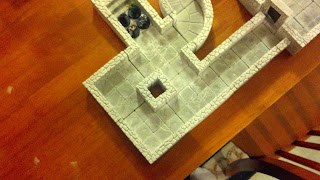 The material is rough and porous, so it should take paint well. Honestly, I would be ok with playing with it straight from the box, but I want to embellish it a little. I like the idea of taking a few pieces and adding some things like moss, broken weapons, bones, etc. to give it a little more life. It is heavy, and the roughness worries me a little, so I will probably find a black cloth to put underneath it as a play mat to protect my table. It is very durable and you won't have to worry about breaking it just from play. You don't want to drop it on the floor or any other hard surface, though, since it would most likely shatter. 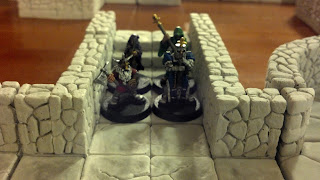 Of course I plan on mainly using it for D&D so here are a few valiant adventurers entering the dungeon. The squares are one inch, typical of most RPG systems. These guys are mounted on 25mm bases so they barely squeeze in. You may find the hallways very narrow for miniatures with very open poses or protruding weapons, so it may take some fiddling to make them comfortable. 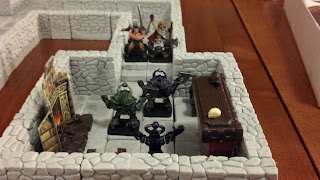 And of course, an homage to the game that started it all. I plan on running at least a couple custom adventures of HeroQuest in these tiny halls!

Overall, I am very pleased with the product. My only real complaint is the crypt tile it comes with. Everything else is so nice, but the crypt is very bland and lacks a lot of detail. I honestly don't see myself using it after I get some more dungeon decor added. I also think it could have two of the four stairway tiles replaced with some straight hallway pieces, but its a minor niggle, since they look great if placed back to back to make a mid-hall staircase.

Those things aside, I am excited to start painting it and play. The quality is good for the price and you get a good amount of pieces to make basic dungeons with. The prices being so good, I am already planning to order a couple of additions, which is testament enough to the product, I think.

So if you need a dungeon to mess around with, give this stuff a shot. You won't be let down and you'll save yourself a bundle if you don't mind painting it yourself. Check it out at http://www.dungeonstone.com/zen/ .
Posted by TheUndergroundLair at 9:45 AM