Heresy At Its Finest

Though it doesn't show up much on this blog, I am a big fan of Warhammer 40,000 and space marines. Specifically, I am a Dark Angels player specifically with a battle company's worth of (mostly unpainted) Greenwing, a reasonable chunk of Deathwing and a splash of Ravenwing. I like marines is what I'm saying. 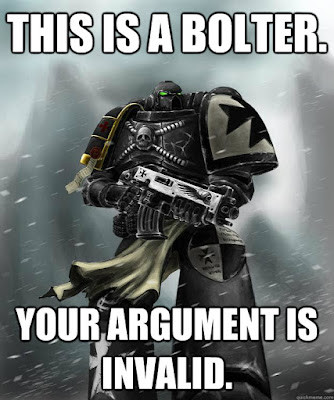 I've never done any gaming in the Heresy Era, not because I don't like it but because it never really got big in my area and Forgeworld is expensive. Enter Games Workshop's latest board game offering, Horus Heresy: Betrayal at Calth: 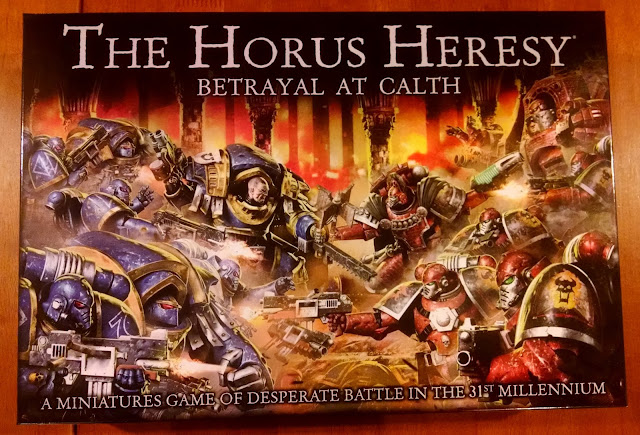 It is a beautiful box filled to the brim with nothing but marines. As the focus of the heresy was the space marine legions fighting each other, this makes nothing but sense. The game centers around the betrayal of the Word Bearers against the Ultramarines on the world of Calth. I'll talk about the game in a minute but I do want to discuss the miniatures first.

The box gives you 2 characters, 1 Contemptor dreadnought, 5 Cataphracti armor Terminators and 30 standard marines in MK IV "Maximus" armor. The first thing you'll notice is that, except for the characters and dreadnought, the sprues are full multi-part kits. 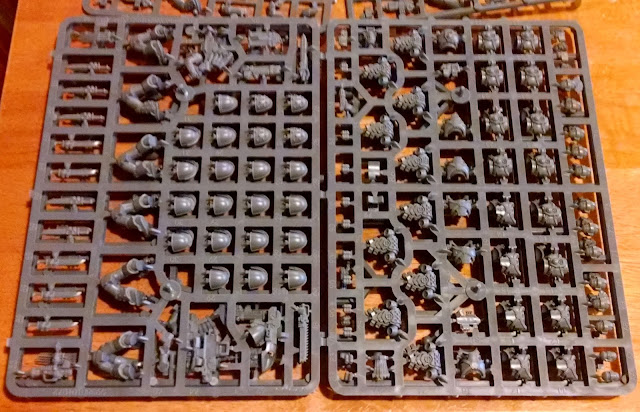 No static, push fit minis here. Every option is available to a unit, with plenty of parts left over. Even the dreadnought has a choice between assault cannon and multi-melta. The characters are cut up in odd fashions, but are both on the same sprue. This all fits with rumors that some of the sprues may be boxed up and sold separately later.

Now all this cutting and gluing (and painting) means that the set is a little less friendly to the casual board game player. However, I suspect GW doesn't really count those people at the target market. This box is a major boon to people who want to get into 30K gaming or who want to have a large number of older armor marks in their 40k. In fact, I added up the contents as a Chaos Space Marine army and came out to about 1300 points. That is a solid core of infantry for any army, with characters and a dread as gravy.

One issue is that the tactical marine models are functionally identical, so to actually play the game you have to find some way to identify the different side. One way to do that is to actually paint the models, but fuck that noise. I went the super simple route and just painted a ring of color around the bases. Effective and also leaves the models open for different color schemes in the future without having to strip them. 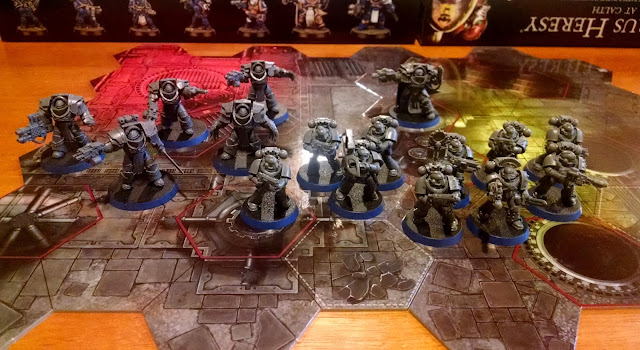 I am also a little disappointed that there is just barely not enough room for the dreadnought in the box once assembled. This is not an uncommon problem with GW games and I have developed a solution for this occurrence. 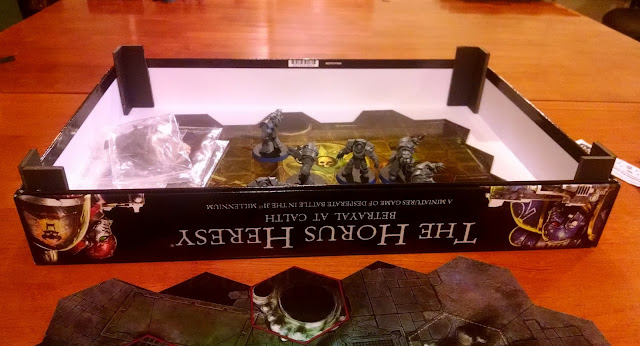 I have taken to making little stilts out of foam core and hot-gluing them into the corners. Nice and sturdy and they only have to be tall enough to make the necessary room.

I can't really describe the game mechanics better than GW themselves, so I'll let them do that:


Now, I have only played one game but I really like what I've experienced so far. In general feel, the game is a lot like a very tactical scale BattleLore or Memoir '44, with it's hexes and symbol-covered dice.

The action point system is great. Swapping back and forth with unit activation is a bit of a departure to GW's usual way of doing things. Both player sharing the turn makes sure one side doesn't wipe out the other without fear of retaliation. Sure, there is an initiative system but that just means one player gets a single chance to perform an action first and while that can be game tipping, the fact that it can switch sides from turn to turn makes it uncertain. Do you take the risk and hope for initiative or play it safe? Decisions are always good.

I am supremely happy with a hex board, since movement feels much more fluid. The art on the boards is amazing, but they also took the time to make sure those boards had plenty of well-defined cover to bounce between. Movement is much more important than just rush at the enemy and see who gets there first. Each stalagmite or piece of machinery can mean the difference between reaching your destination or getting pasted by a missile launcher.

Speaking of blowing things up, the combat is reminiscent of HeroQuest and that ain't bad. Combat resolution is simple to pick up and rolling those saves can feel tense. I love the critical effects, since this makes each combination of troops in a hex a little different and gives you a great bonus or two to choose from if you roll well. I also like that each model in a unit matters, since attack force is added for each model. This encourages creating tight knit squads supporting each other instead of just running around the board as loners.

Moreover, the decks of special cards for each side provide some great extra abilities that make each side play a little differently. Ultramarines use squads in tandem to increase effects, while Word Bearers get powerful effects for single units but sometimes at a cost.

While we are on the subject of cards, the reference cards are great as a quick way to check out your models' stats during the game. The damage deck for the dreadnought is also cool, as you never know how tough he will be when you attack, and wearing him down bit by bit makes him a scary monster instead of a one-hit wonder. My only wish is that they had put the weapons on cards as well. The reference on the back of the rulebook is great but it means closing the book and flipping it over if you need it. Weapon reference cards, maybe on half-size cards, would have been great to keep on the table next to the units.

The game comes with six different scenarios and they all look like they provide a very different experience. Scenario one, for example, is a race but scenario five requires one side to reach a destination and hold it while keeping a key model alive. The scenarios tell you which models to use, so the sides are already balanced. The scenarios are also set up well for building your models as you go along. You start with a tactical squad for each side, then add terminators and the dreadnought and so on in each scenario, so you don't have to rush to assemble and paint things all at once.

And even though the units in each scenario are set, you have choices with the unit options. Each option is free, but they are balanced by having different tactical applications on the battlefield. You can take a melta gun and wreak havoc at short range or a plasma gun for bucket loads of dice from far away and hope you don't blow yourself up. 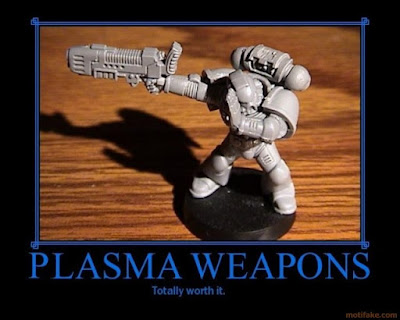 A powerfist is infinitely better on a tactical sergeant than a terminator because they can count on more support but a terminator's twin lightning claws add multiple extra dice with re-rolls. It all comes down to how you expect to use the unit on the board.

Just be wary that some combinations might not necessarily be the best in 30/40K if you plan on using them outside of Calth. And if you find a truly compelling reason to use a heavy bolter over a missile launcher in the board game, I'd like to hear it. As it is, suppression is a dime-a-dozen with all those bolters running around and 5 dice with a potential of up to 3 extra dice beats a solid 6 dice in my book every time.

There is a lot of potential in this little game. Right now it feels like a vehicle to sell heresy models and that is probably true. But expansion is possible. Rumor has it that Betrayal at Calth is a new core game and that some units in the future will come with bonus Calth rules. I expect these will be any new plastic Heresy models released, but there's no reason to toss in the occasional timeline-appropriate xenos. The issue I think would be more in the requirement of specific units for scenarios, but that could be solved with the occasional published scenario book, with scenarios related to models released at the same time plus a few with previously released models. There is also room for command cards for different legions or races, new board tiles and even big box expansions with those things plus new models. I know I would love to see a Caliban-based box with a bunch of Dark Angels in MK2/3 armor duking it out against each other in the halls of the Tower of Angels.

There also exists a chance for a separate core rulebook with rules for stand-up fights. For example, players could take turns placing boards to create a battlefield, take X amount of units (as long as each unit is balanced correctly), etc. I would prefer keeping the scenario system, but such a rule set would open up the potential for more unit releases outside of scenario books.

Overall, I'm very happy with my purchase. Is the game worth the $150 price tag? Well that depends on what you want to get out of it. If you want the models, the price is a steal by GW standards and comes with a great game. If all you are looking for is a game, the price tag is a little steep, but you can find the guts of the game sans models on eBay for cheap if you don't mind proxying. I think the potential of where the game can go is worth the cost, as long as GW supports it as rumors say they will.

I bought the game as someone sort of in between, wanting the models for 40K Fallen and looking for a fun game. I have had all of my expectations met in both regards, so I am pleased. It is up to you to decide if the price is truly worth it, but I definitely recommend giving this game a try.
Posted by TheUndergroundLair at 12:00 PM