Life has been a little hectic over the last month. Moving a whole house, including about 3 times as many games as I thought I had, has kept me busy the last few weeks. But I'm glad I'm finally getting to sit down and type up the last day of Comic-Con. It has been almost exactly a month now, so hopefully I can remember everything. I'm also going to use this as a space to house the best cosplays we managed to get pics of. There were hundreds of great costumes but we sucked at getting pics.

Day Two was a fairly crazy affair, so we were looking forward to a much easier Day Three. We only had three goals that day: An autograph from Jewel Staite, John Barrowman's personal panel and the walk-on costume contest, which Brigid had signed up for.

Easy, however, was not on the agenda.

The con was starting a little later in the day, so we were able to sleep in a little bit. We made our way over and immediately made our way to the autograph area. We were significantly early, so we were third in line! We felt very proud of ourselves for making it early so we would have plenty of cushion time before Barrwman's panel, considering the Torchwood fiasco the day before.

This turned out to be a futile endeavor. Jewel ended up being about an hour late, which made us panic immensely. Not only did we question our time frame, but after her being so elusive the day before, we were worried she might skip out altogether. Eventually, though she did appear and I got my pic signed. 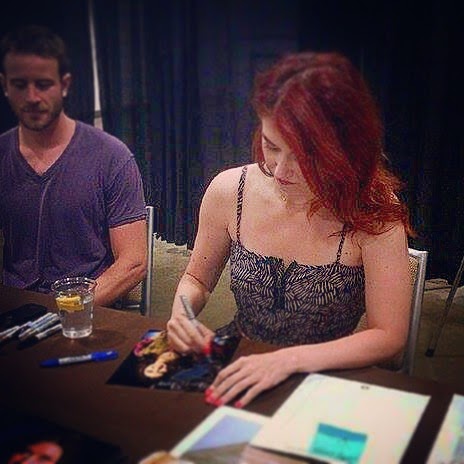 I had her write "Stay Shiny!" on it, which probably made her want to kill me with a hatchet. Scrawling the same word over and over in some variation on thousands of pictures of her own face probably was starting to wear a little thin. Whatever. Screw her sanity, I got my commemorative item.

I don't want to sound ungrateful, but Jewel Staite was probably my least favorite celebrity interaction. It was wonderful to get to meet her, but it just didn't come off as warm or friendly as the others we'd had. That's not to say she was rude. She was perfectly pleasant and I was still thrilled to be near her and shake her hand. But the same energy just wasn't there. I like to think that maybe she was just exhausted or feeling ill (hence being late) and that the fun, quirky, happy woman we had seen in the panel earlier was still in there, just taking a small nap.

We made a mad dash for the panel area, getting there a scant 2 hours early. People were already lined up for Barrowman and had been for at least an hour. In order to mitigate the possibility of a situation like the day before, no one was allowed up the escalators/stairs unless they were going to another panel or entering the costume contests. Anyone done with their business had to go back downstairs immediately. A pre-line of 125 people had been allowed and there would be an announcement when the second pre-line would be formed.

Of course the same problem persisted: the area at the end of the stairs was big and soon began filling up with nerds waiting to be in the second pre-line. And yes, we were in that group of nerds. So we were part of/witness to the shenanigans that followed.

As soon as the first line began to move and the second line announced, the wave of geeks surged forward. The mighty Linemaster, blocking the end of the stairs, raised his arms and shouted, "Anyone within 10 feet of me is not getting in!"

Dorks scattered like cockroaches away from him, to sit perched at the perimeter of his ultimatum like hyenas around a lion's kill. Every attempt to form a second line ended in a similar result, even with threats to cancel the panel. Once again there were a good thousand people who didn't realize that they weren't getting in, as if some miracle was going to add seats to this wondrous, extra dimensional amphitheater. Somehow they managed another 125 people up the stairs without an act of savagery. Only 100 people remained but the natives were getting restless

The final solution is that everyone was forced out of the lower area and past the 5 sets of double doors, people streaming out into the general convention area. It was then announced that they would take 20 people from each door. We rejoiced because we were easily within the first 15 of our door. In case you doubt the mass of people that was there, I did manage to get a few quick snaps of the crowd this time. 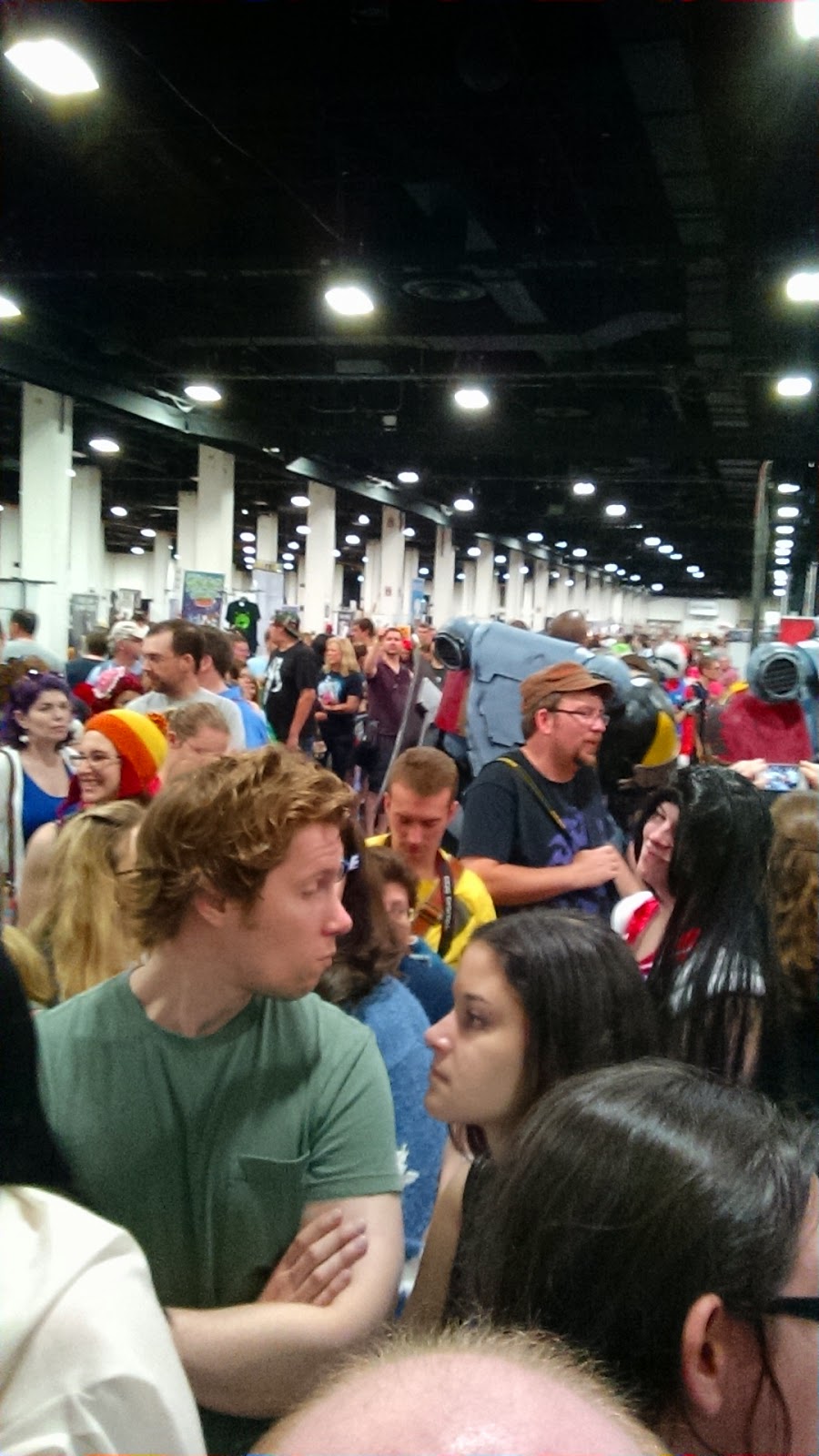 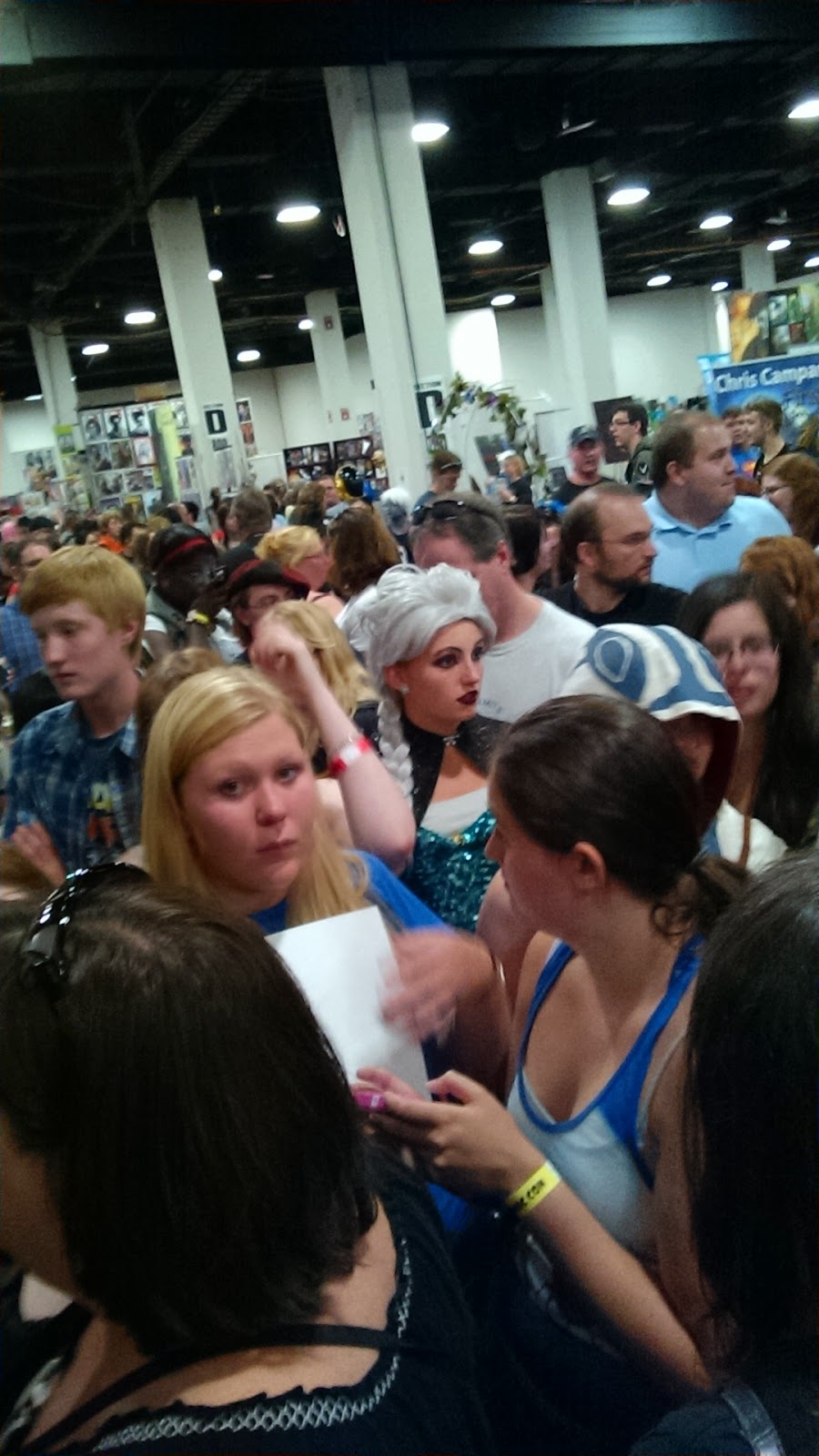 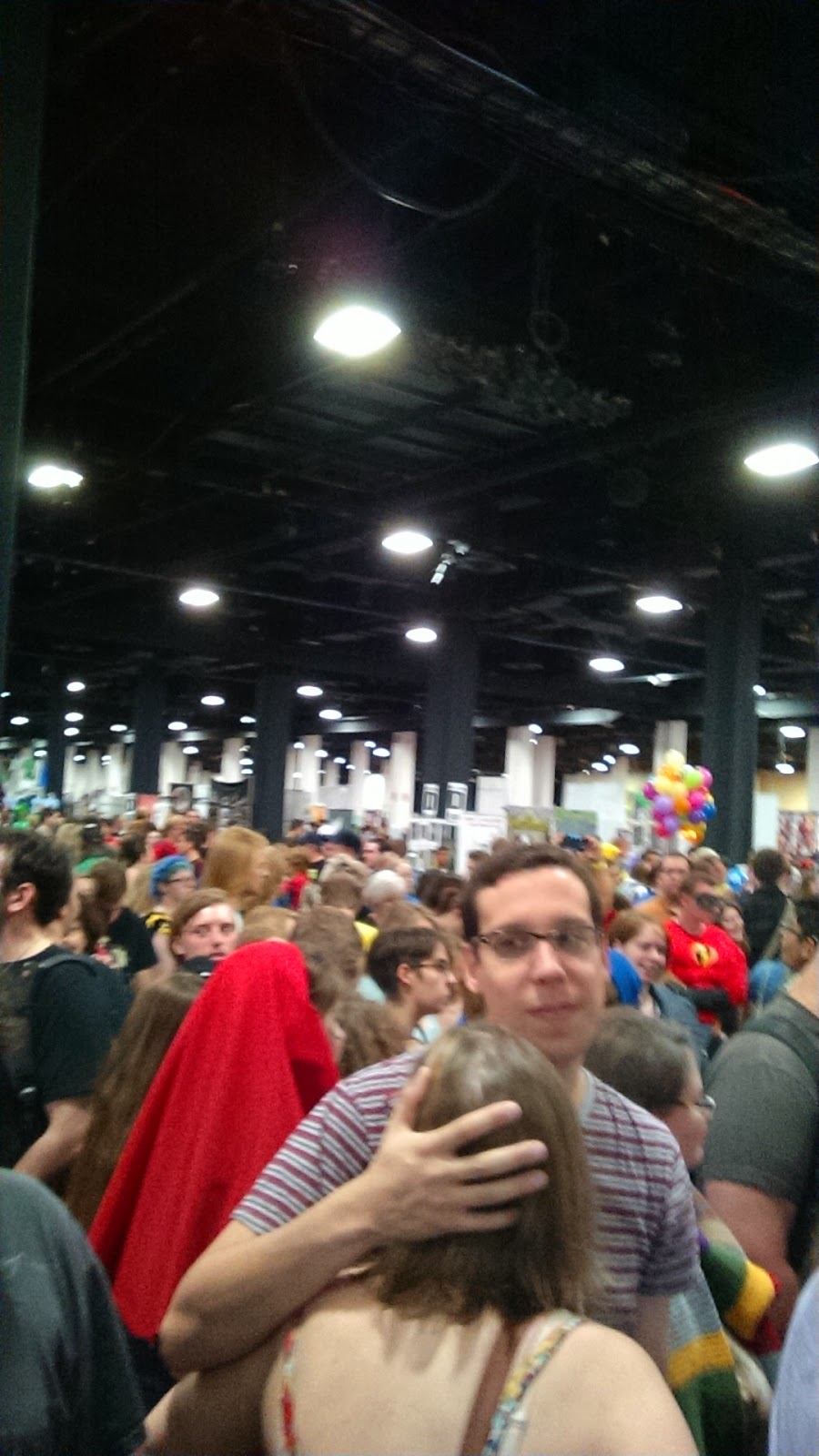 Yes, those are all people waiting to see John Barrowman. Soon our door (slightly right of the center doors) opened and the lady said she would start by taking four people, two couples. Our hands shot up and we and a pair of boys were let through and instructed to see the lady in the very tactical looking vest by the stairs. As we made our way over, the center doors burst open and a column of nerds surged through, heading for the stairs. We hustled over and were given our numbers as the staff yelled at each other about ignoring the plan. Apparently the even promoter told them to open the center doors. They were very lucky no one got trampled. We took our ink (I was number 200; I don't pretend to understand their numbering system) and headed upstairs, the worst over.

Once again, the John Barrowman panel was amazing. Easily the best time by far. The only picture that can sum it up is this one: 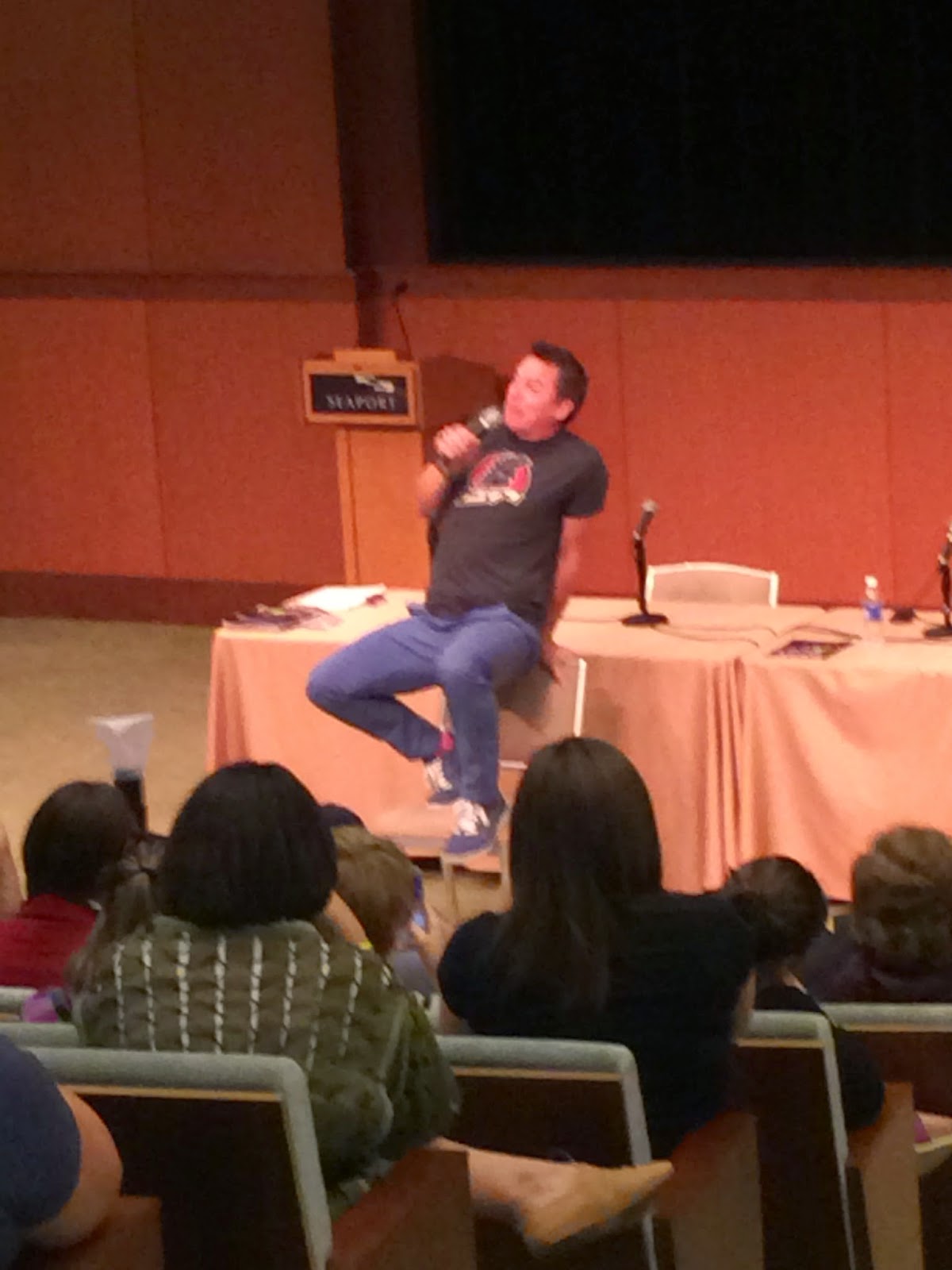 However if you require a more in-depth account, Brigid has several videos on her YouTube account. If you have to watch just one though, it has to be this one.


After the panel Brigid attempted to get to her costume contest, but three days of stress and exhaustion finally caught up with us. We cut our losses and made our way back to the hotel to gather our things.

We did, however, happen to have one last celebrity interaction before we left. It turns out that Jason Momoa was staying in our hotel and he walked through the lobby while we were waiting for our cab!

Soon, though we were on a bus and on our way home, happy and exhausted. The whole thing was an amazing experience. In fact, Brigid had so much fun that she has signed up up for Vermont Comic Con in October. I'm not sure it'll be as fun, but it might be less stressful.

That's all for the con adventures. Now I will just leave you with pictures of amazing cosplays!

We managed a ton of pics of Doctor Who related pics with some lovely people: 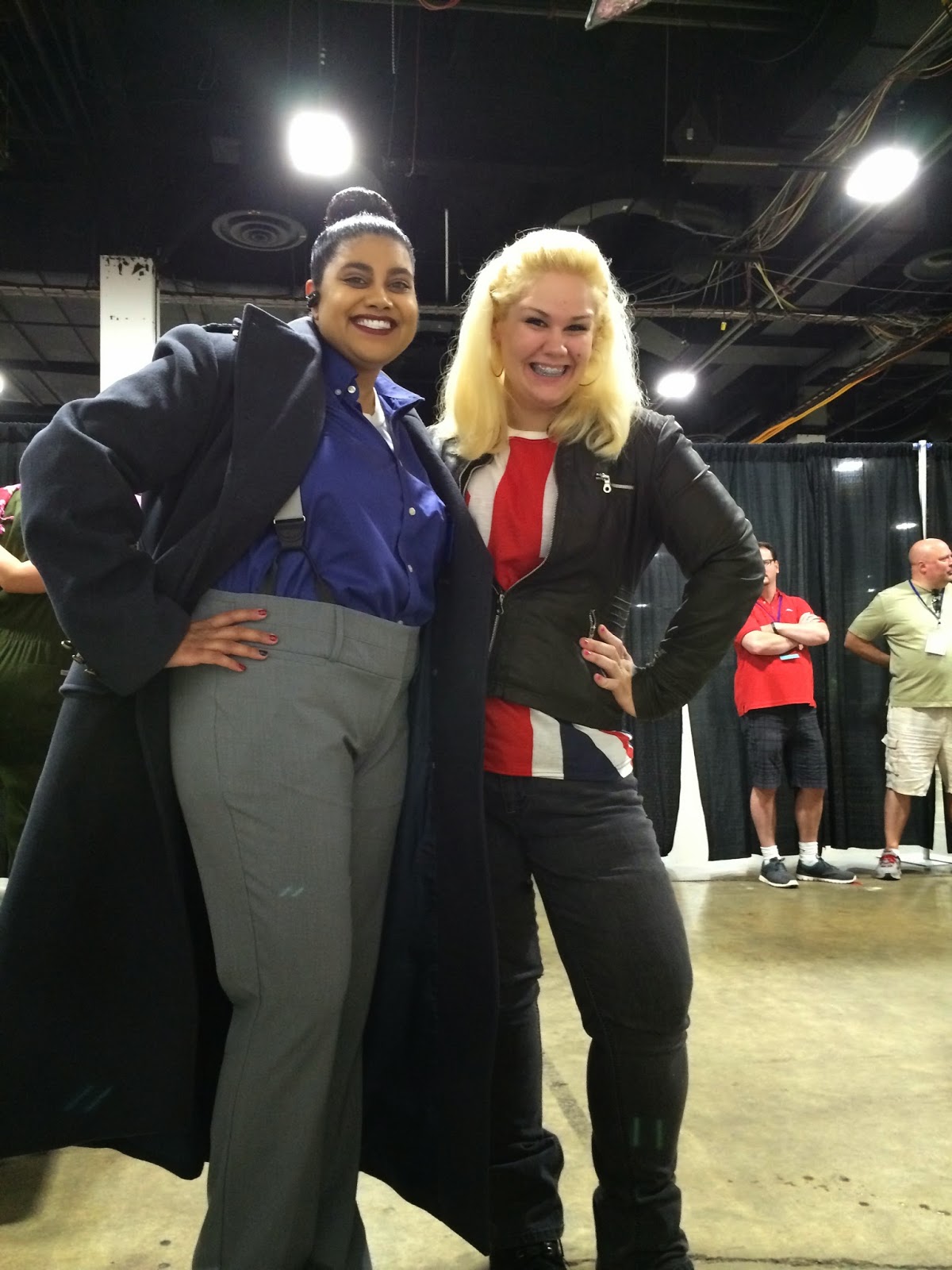 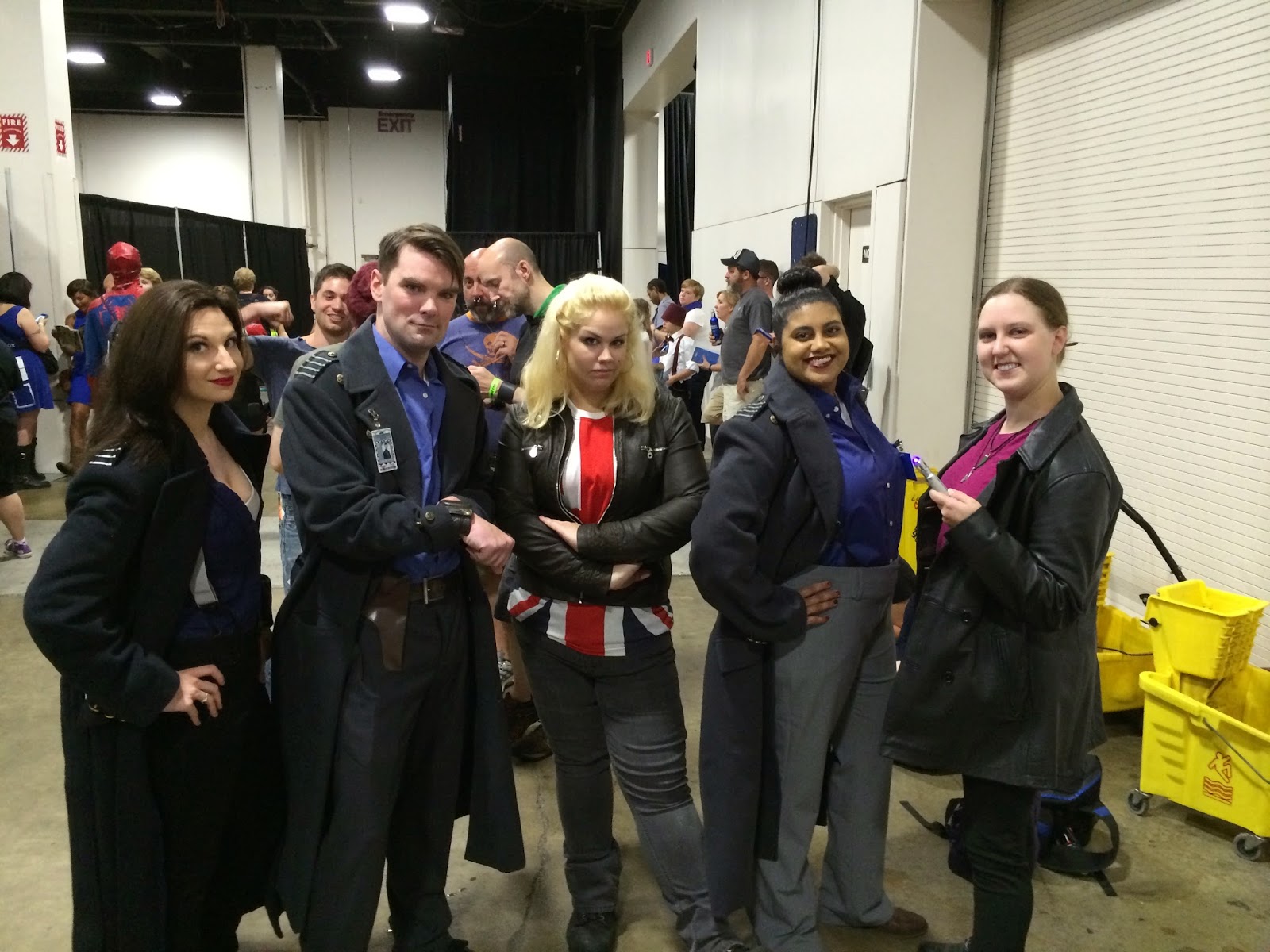 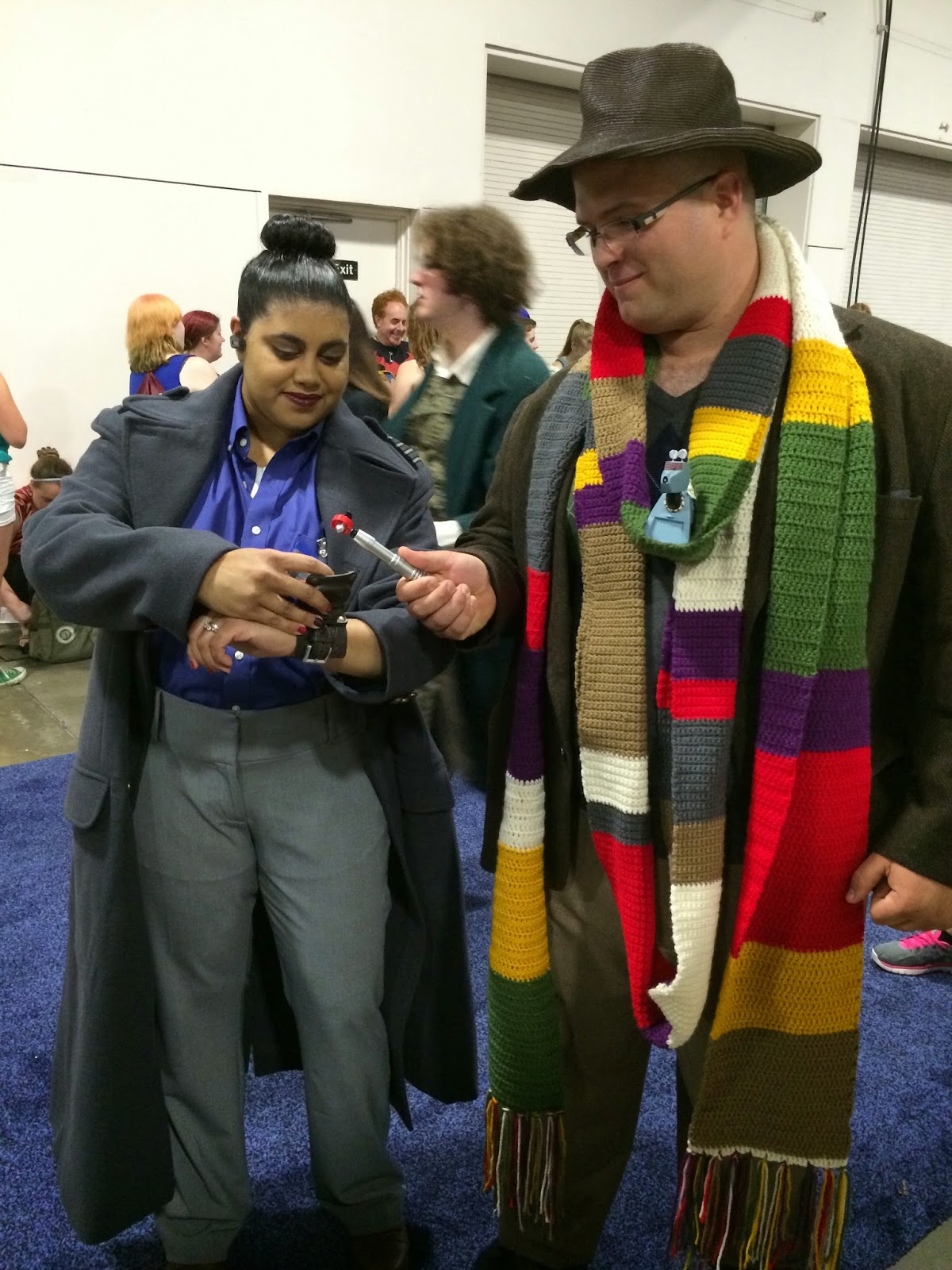 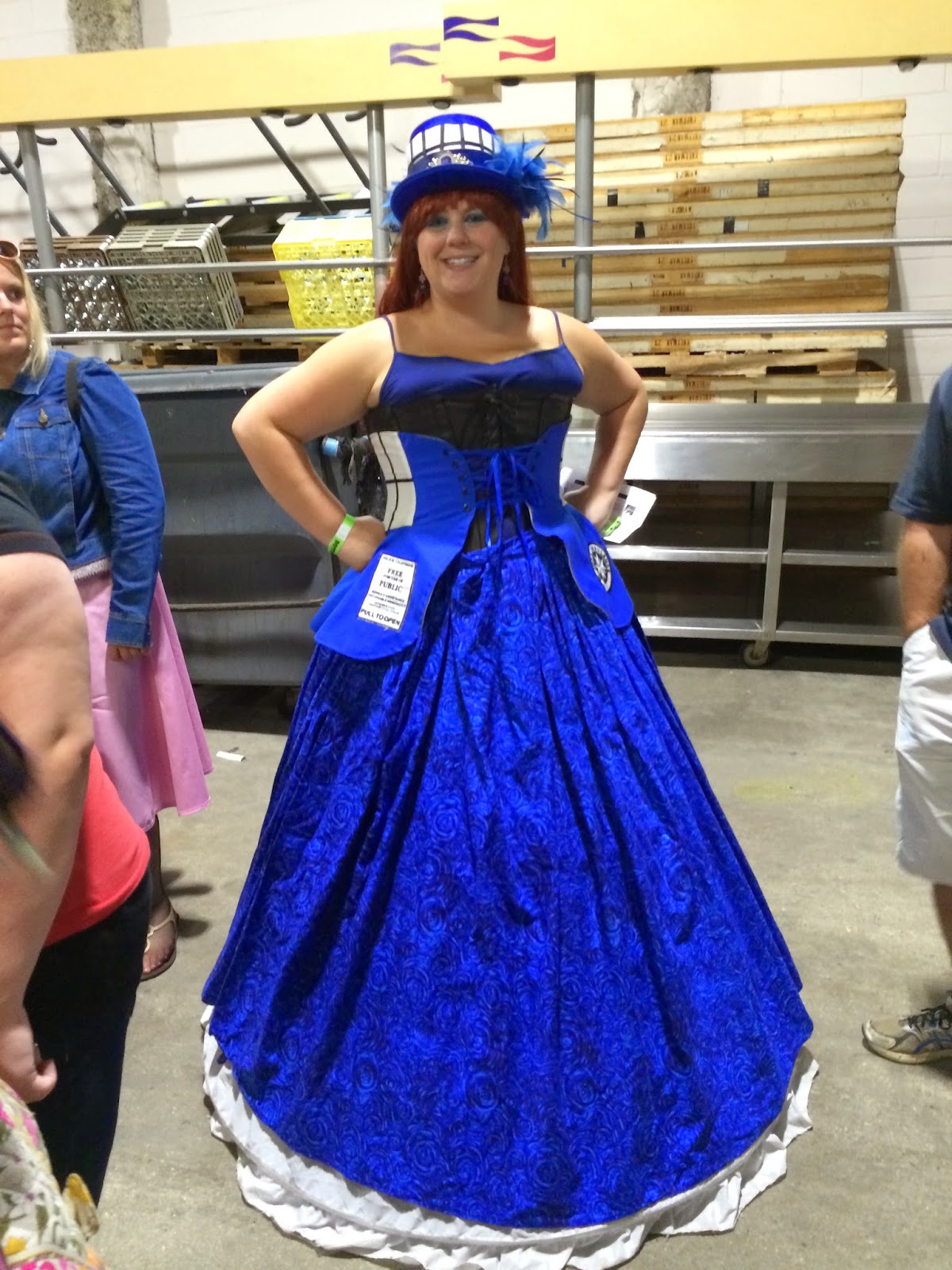 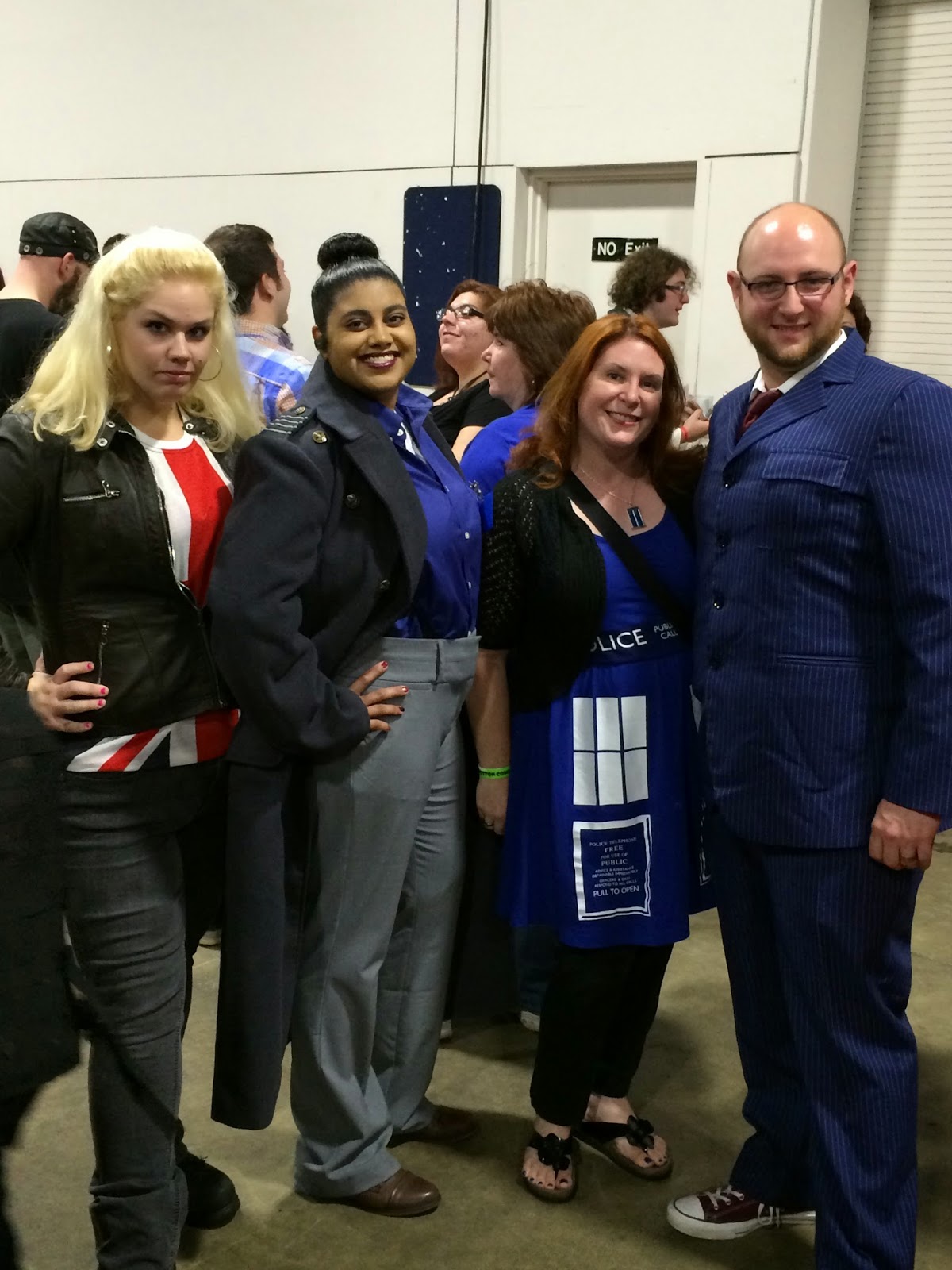 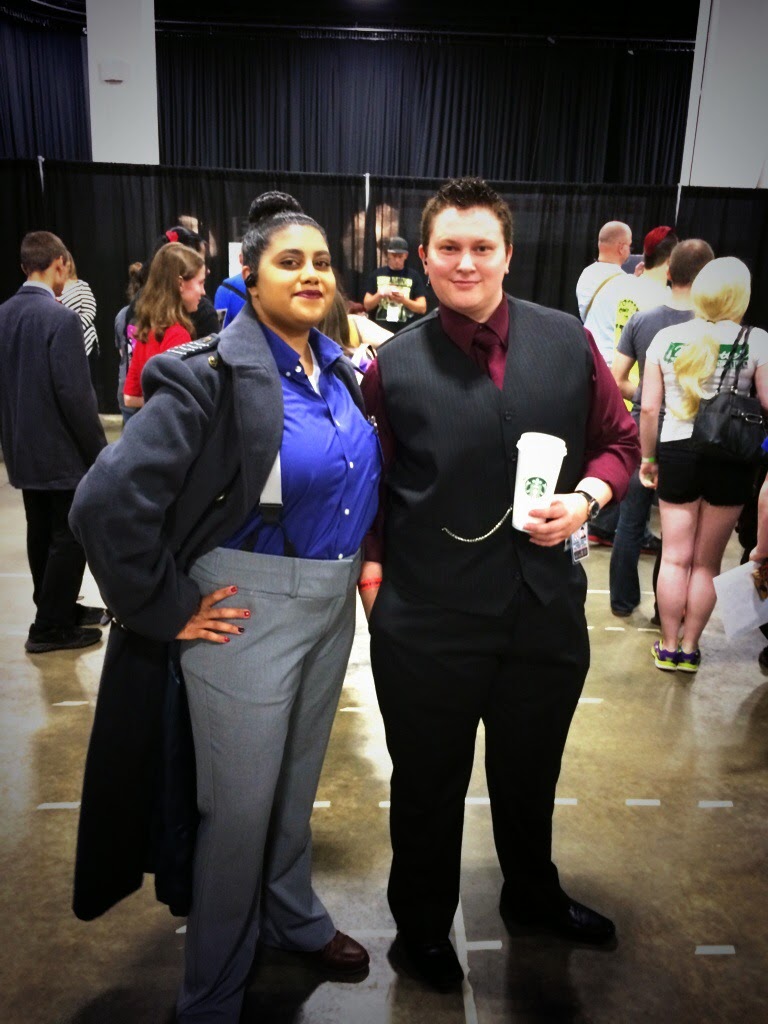 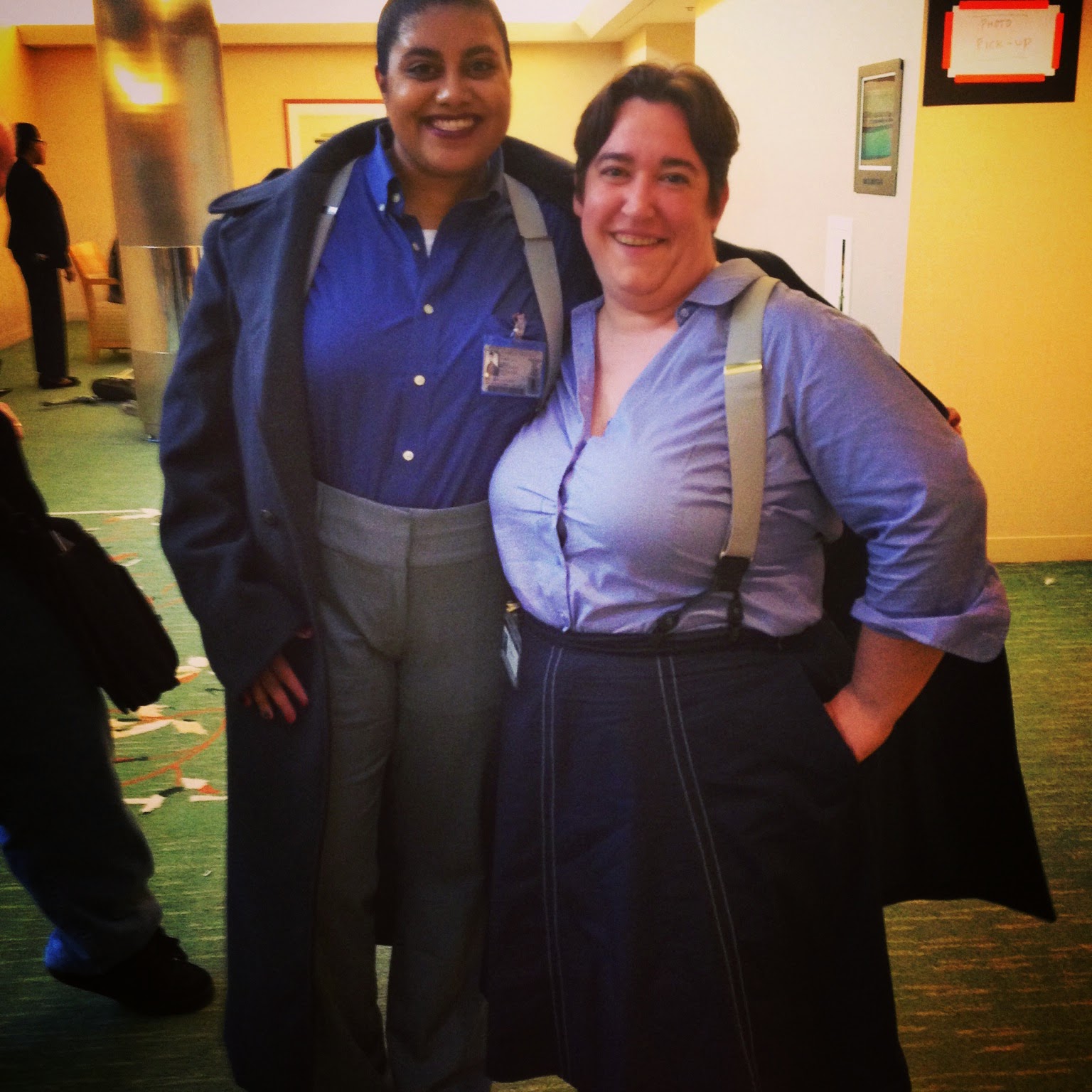 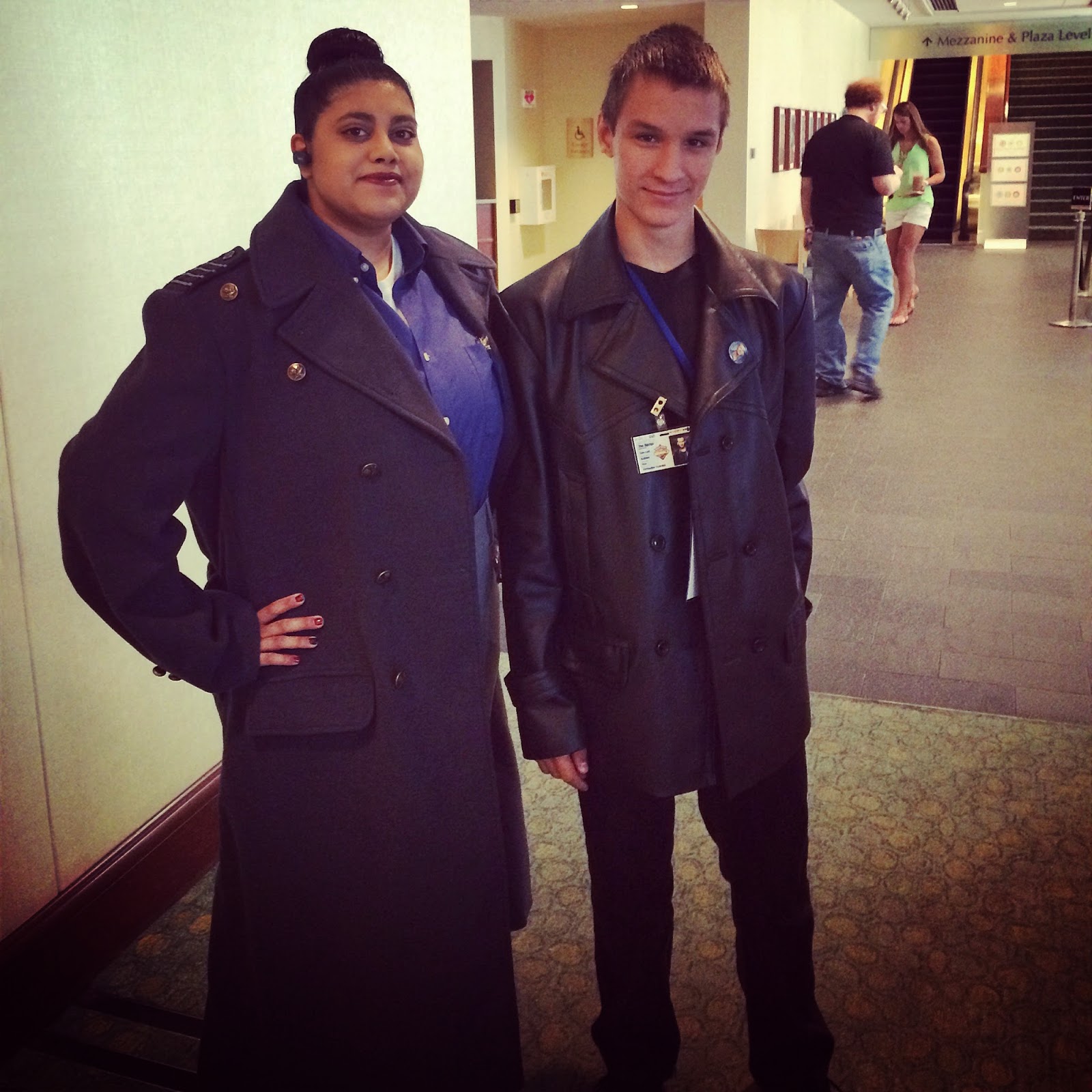 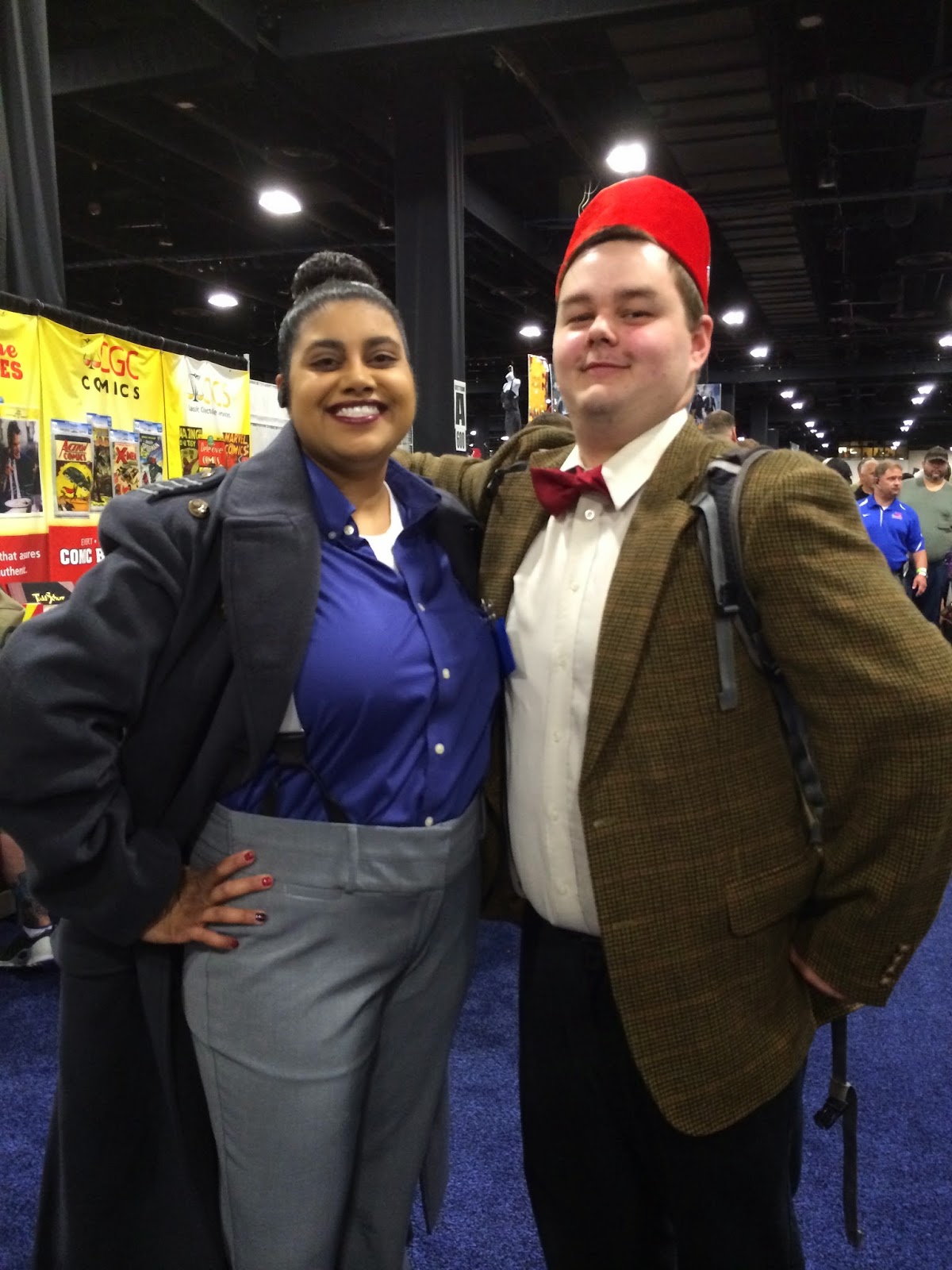 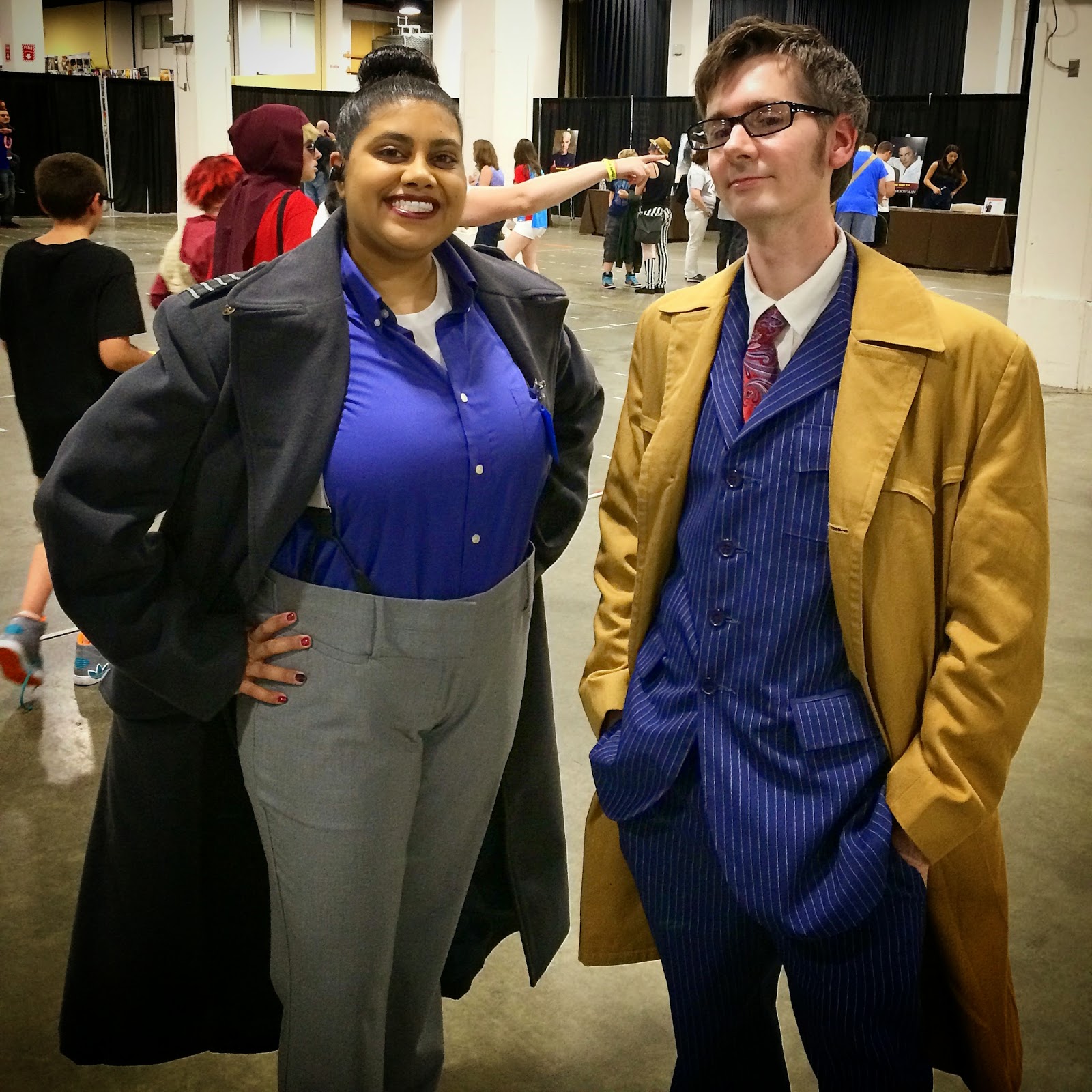 Brigid also made Con-friends with an Ianto and Jack couple (also seen above): We also got a nice variety of other characters from various sources: 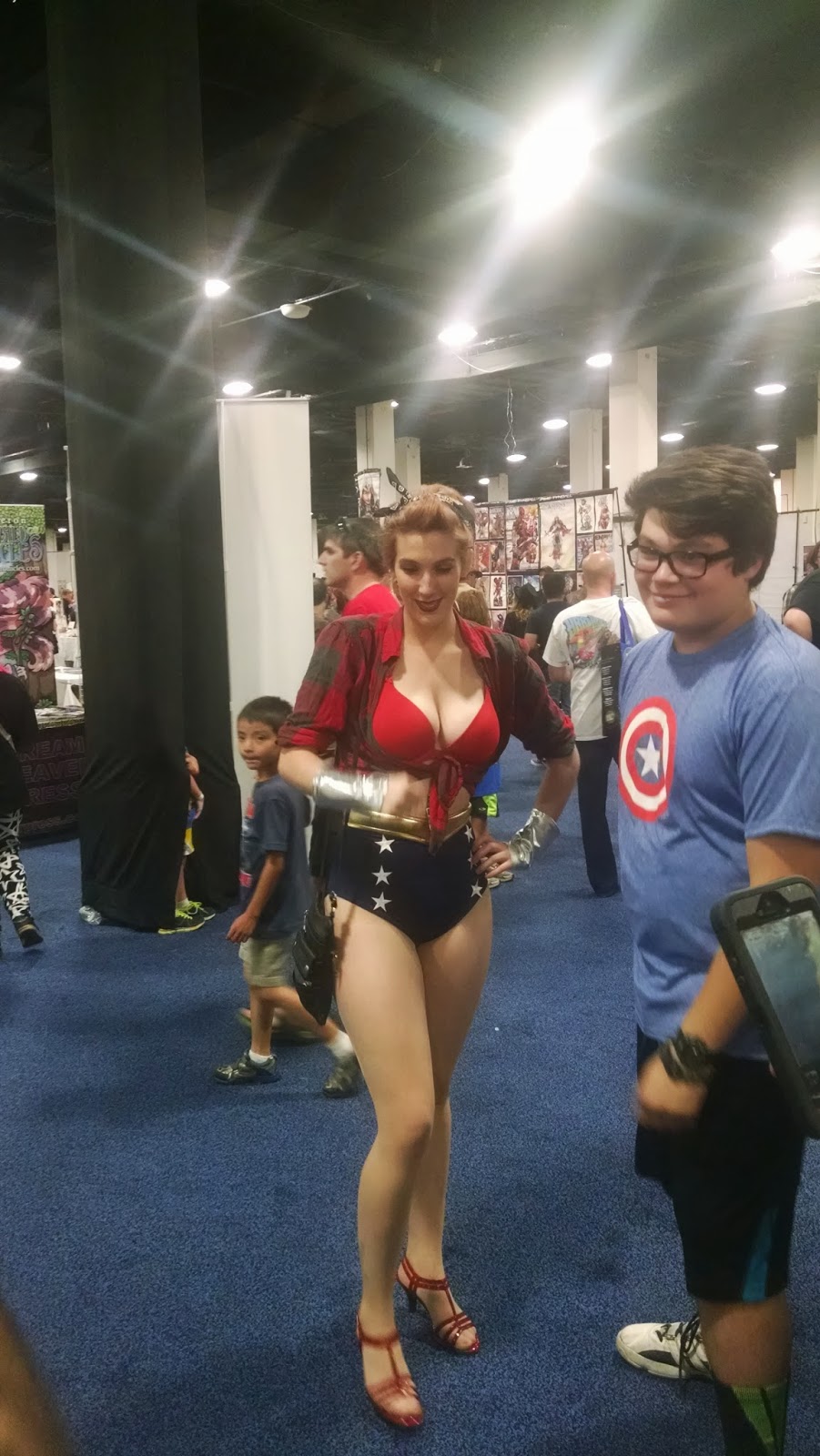 And that's it for cosplays! I hope you enjoyed the report even if it was insanely long. And if you missed out on the other parts, you can find them here and here!

Posted by TheUndergroundLair at 5:09 PM