After crashing hard following Day One, we woke early the next morning to continue the Comic Con madness. Hereafter follows the account of...

This being only our first con, Brigid did an extremely brave thing and decided to cosplay. She worked up a full costume for Doctor Who/Torchwood's Captain Jack Harkness, complete with awesomely badass (and extremely expensive) coat. 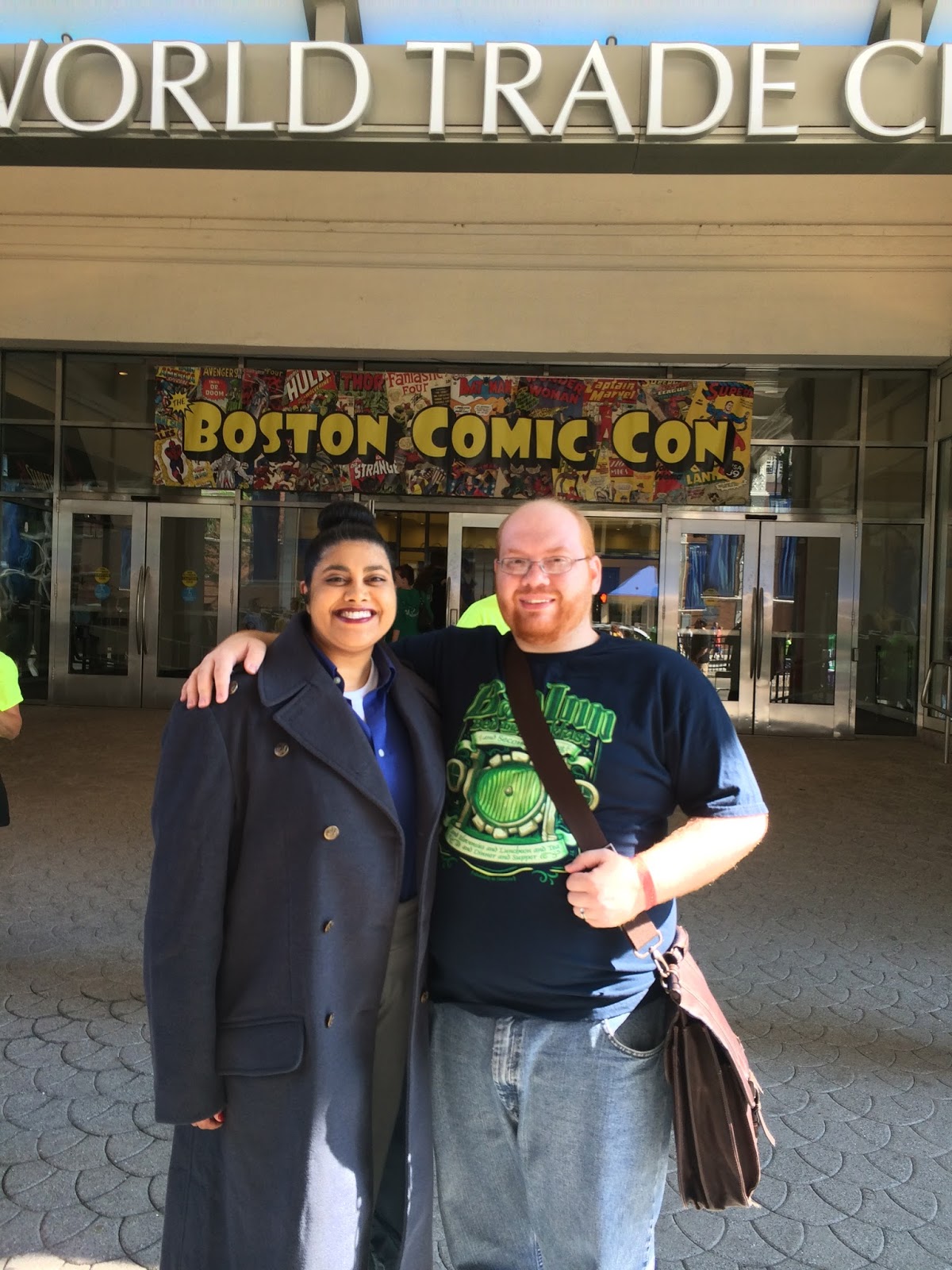 The day before had been about taking in the sights and checking the lay of the land. Today was to be all business. With a jam packed schedule of autographs, photo ops and panels, this was going to be the true test of our con mettle.

The first thing we did upon entering was head straight to the signing area. We waited in line about an hour for John Barrowman, who was a tiny bit late since he had come straight from shooting and I'm sure was exhausted. However, John was extremely friendly and accommodating to his fans and had great energy at the table. Not only did he sign a picture for us, but he also signed Brigid's Captain Jack coat while she was wearing it! 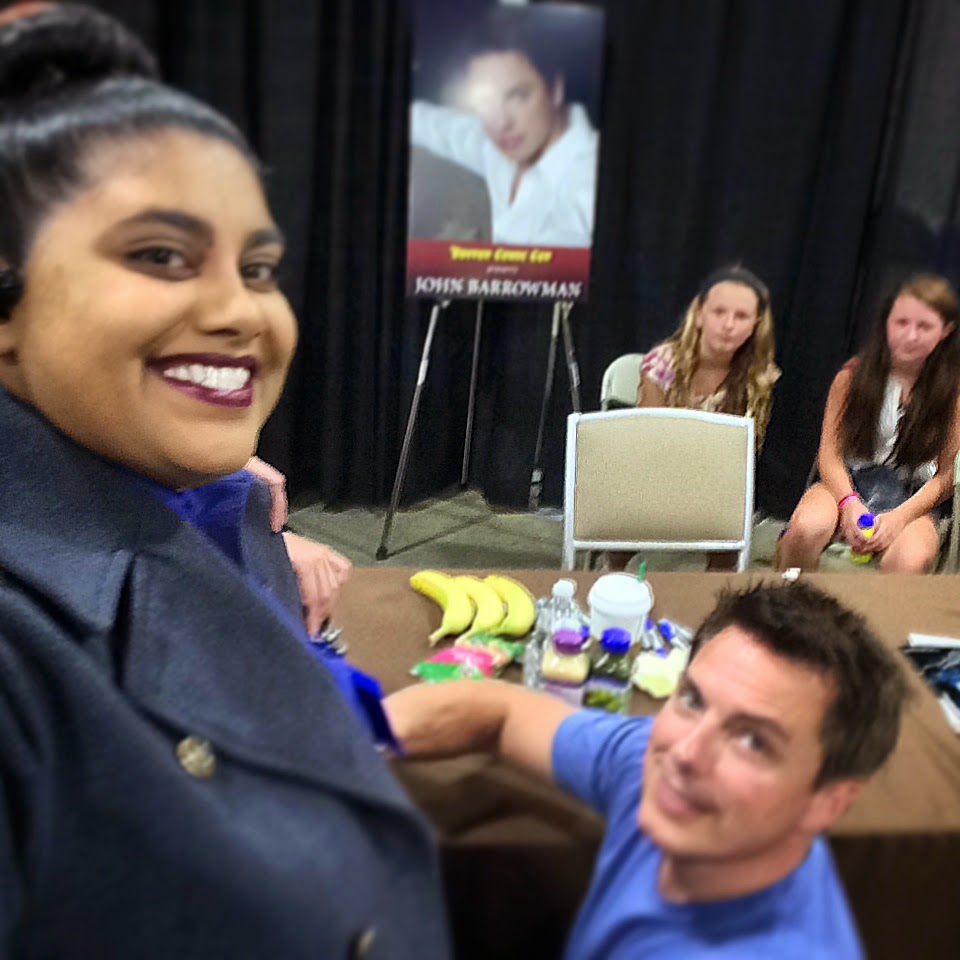 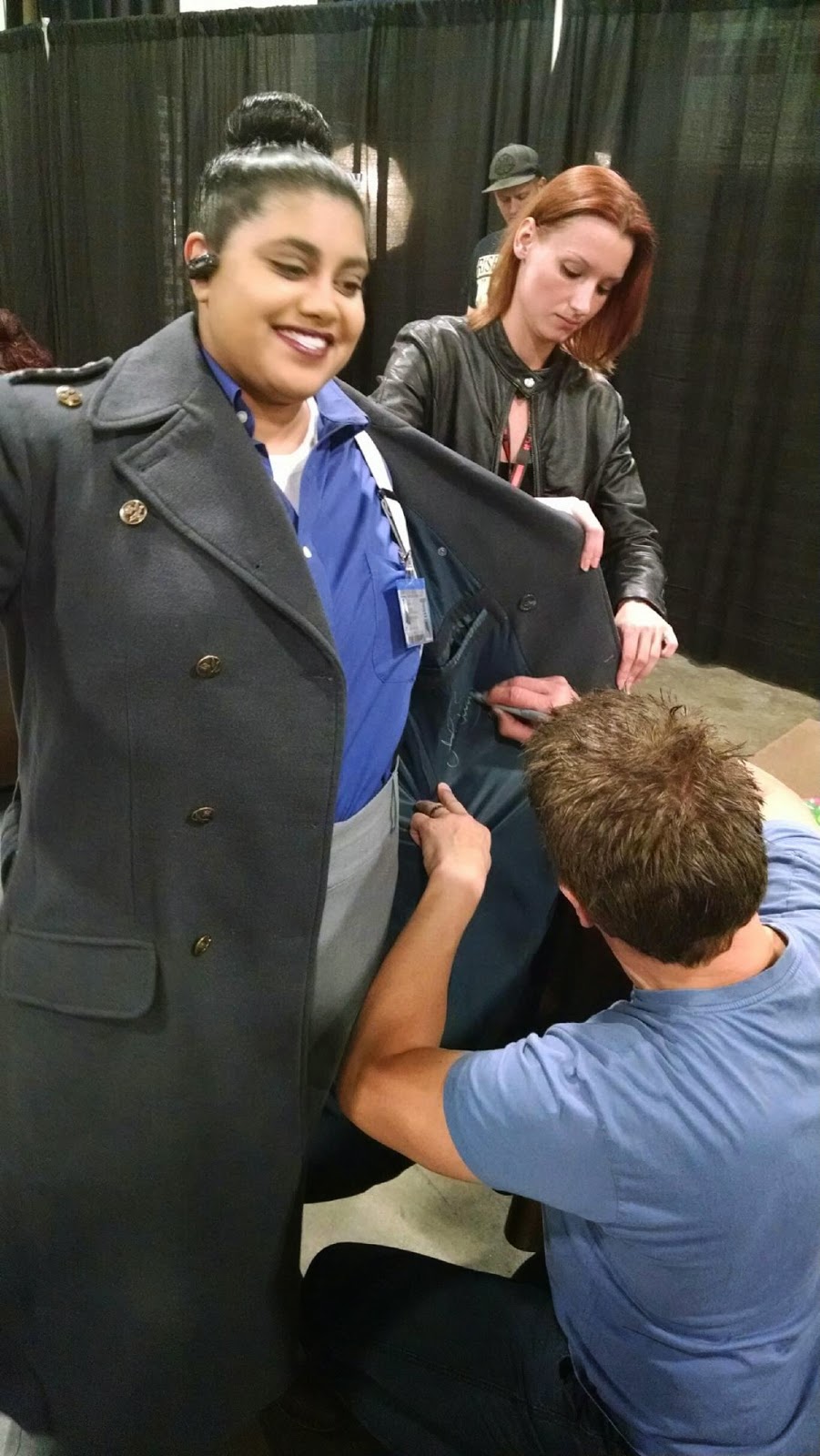 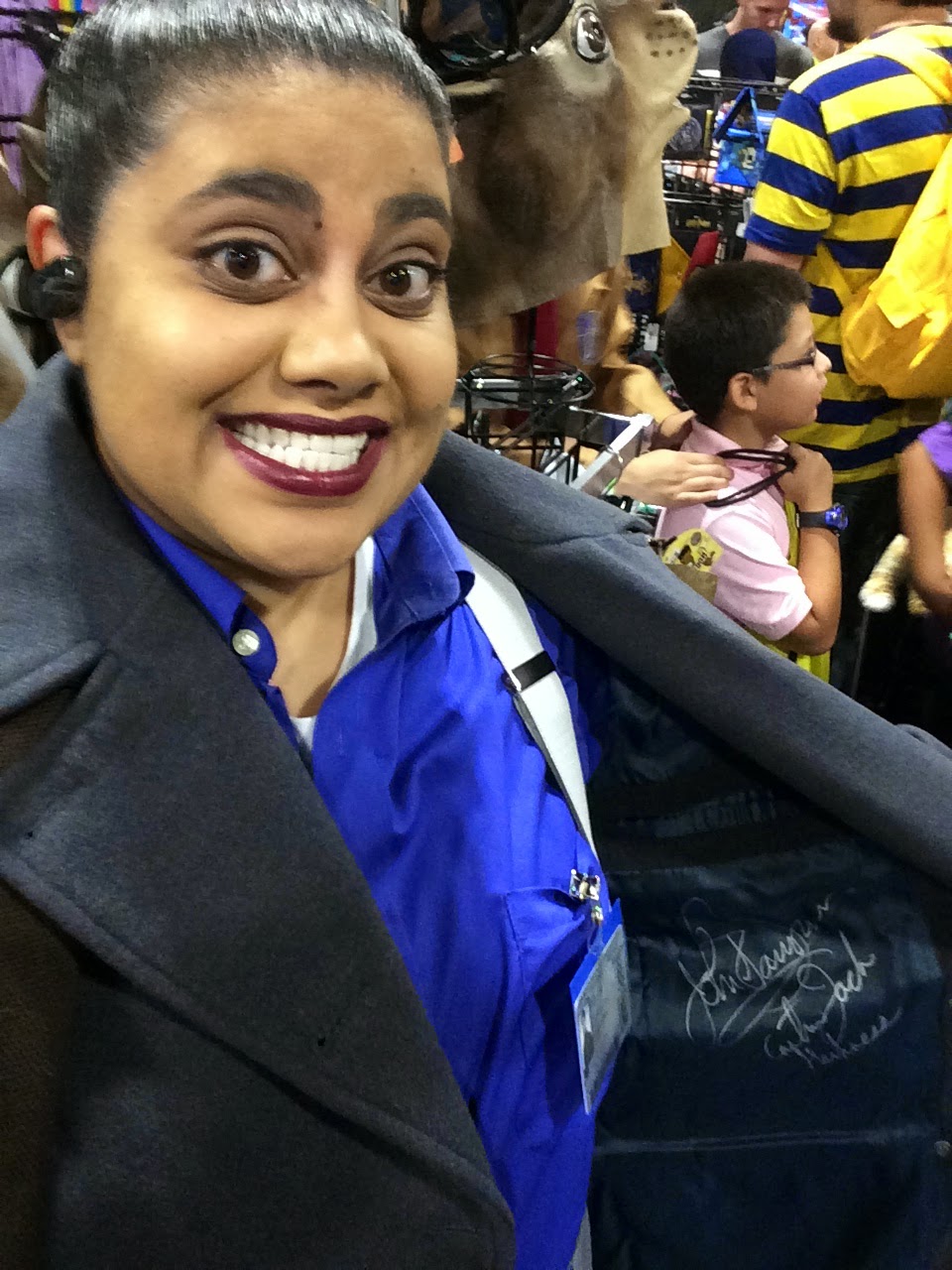 Then we stopped at Sean Astin's table and he was very friendly. I got him to sign my mini Lord of the Rings SBG book, right over Samwise's profile. 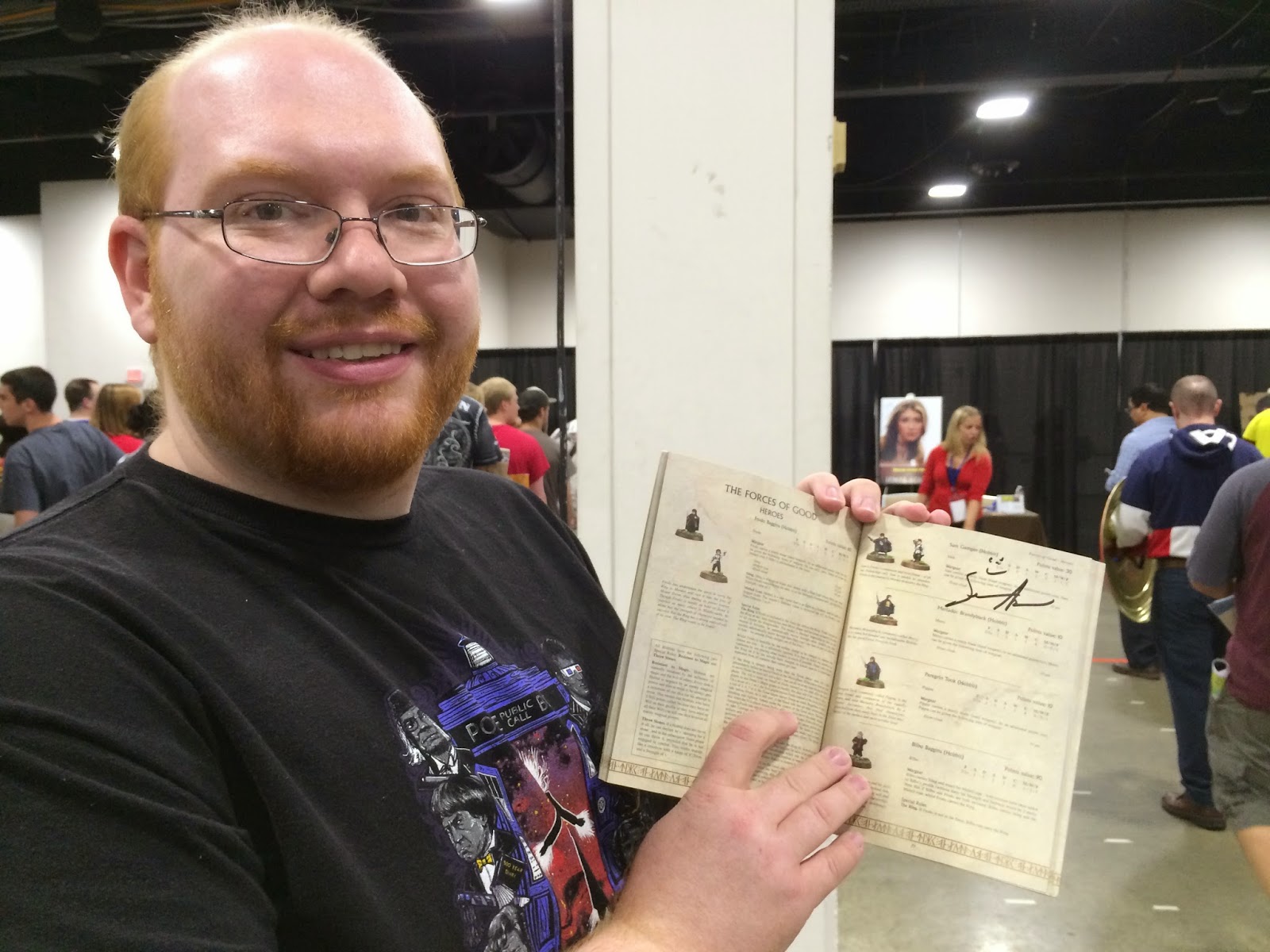 We also spotted James Marsters at a distance: 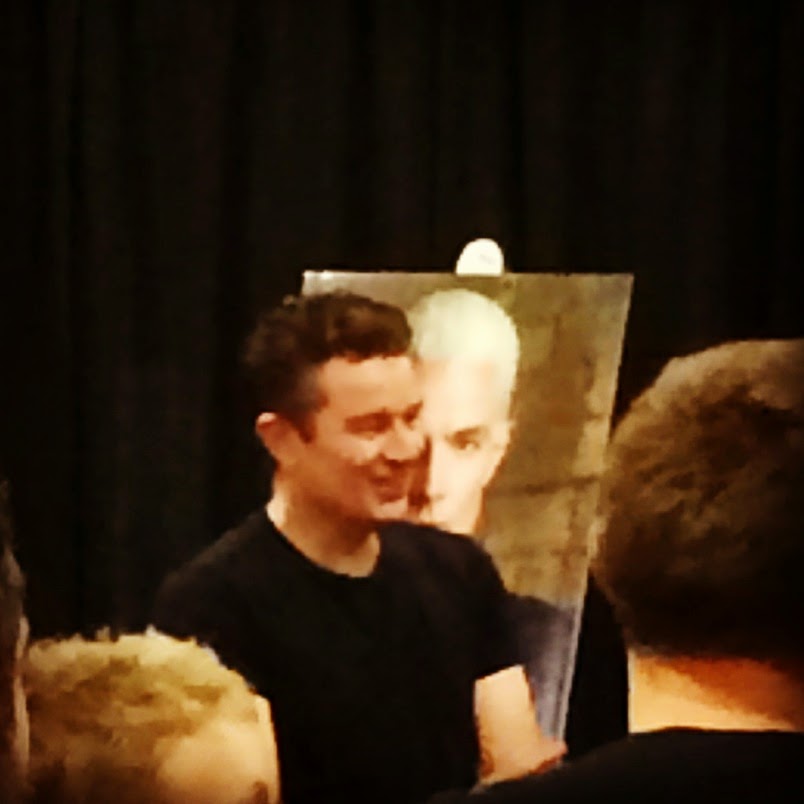 And Jason Momoa, who did a walkthrough of the signing area. Dude is fucking huge. I took a video and the thing looks like a damn sasquatch film:

After getting our signatures, we went to the Star Wars comics panel. We let shortly after it began. We didn't recognize the artists, the room was small, it was hard to hear and generally bored us to death. So we snuck out and went back to get Eve Myles signature.

Eve was awesome. She was super friendly, and even though we had to pay $20 for table pictures, she let us do multiple for that amount and was fun and silly. The whole thing was a riot. 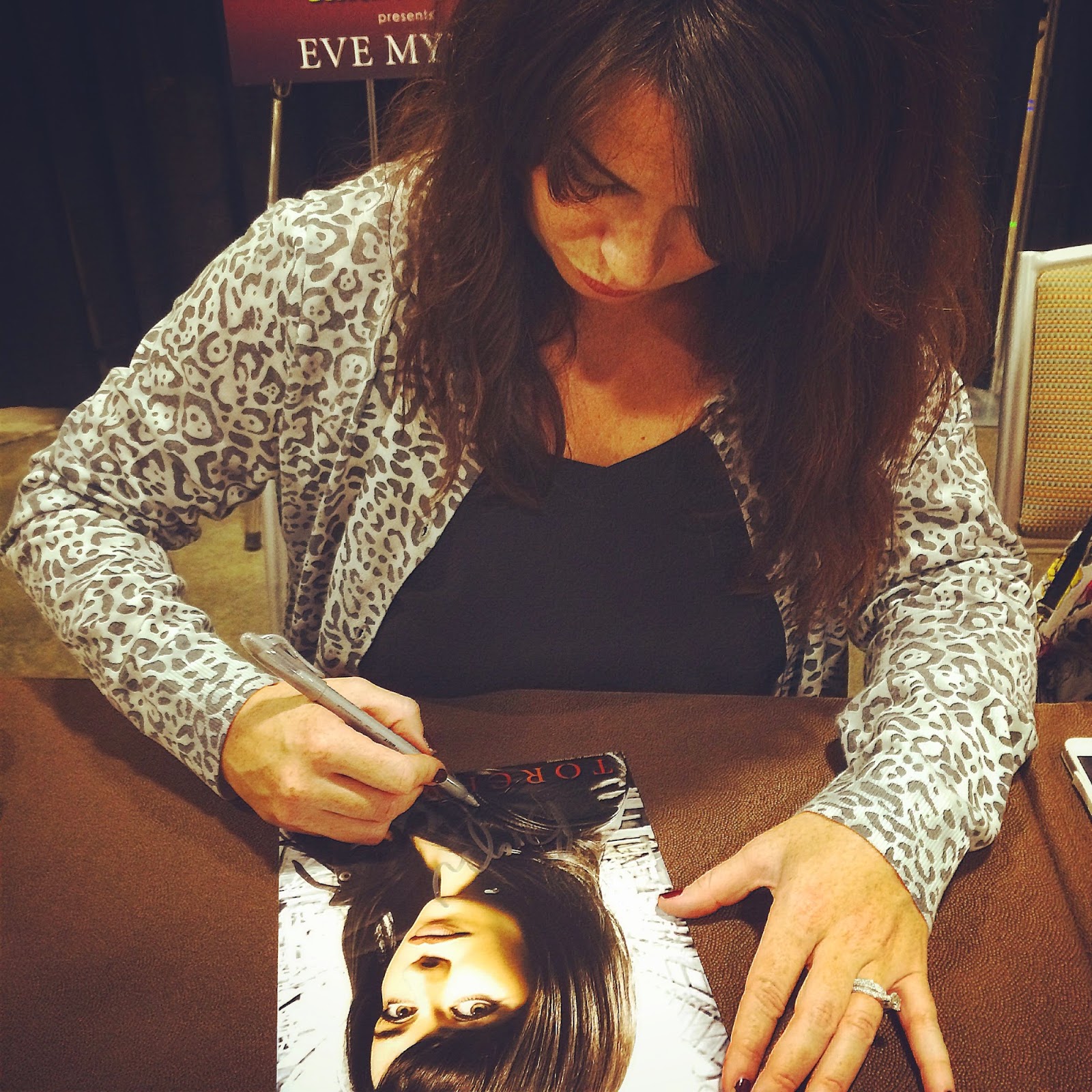 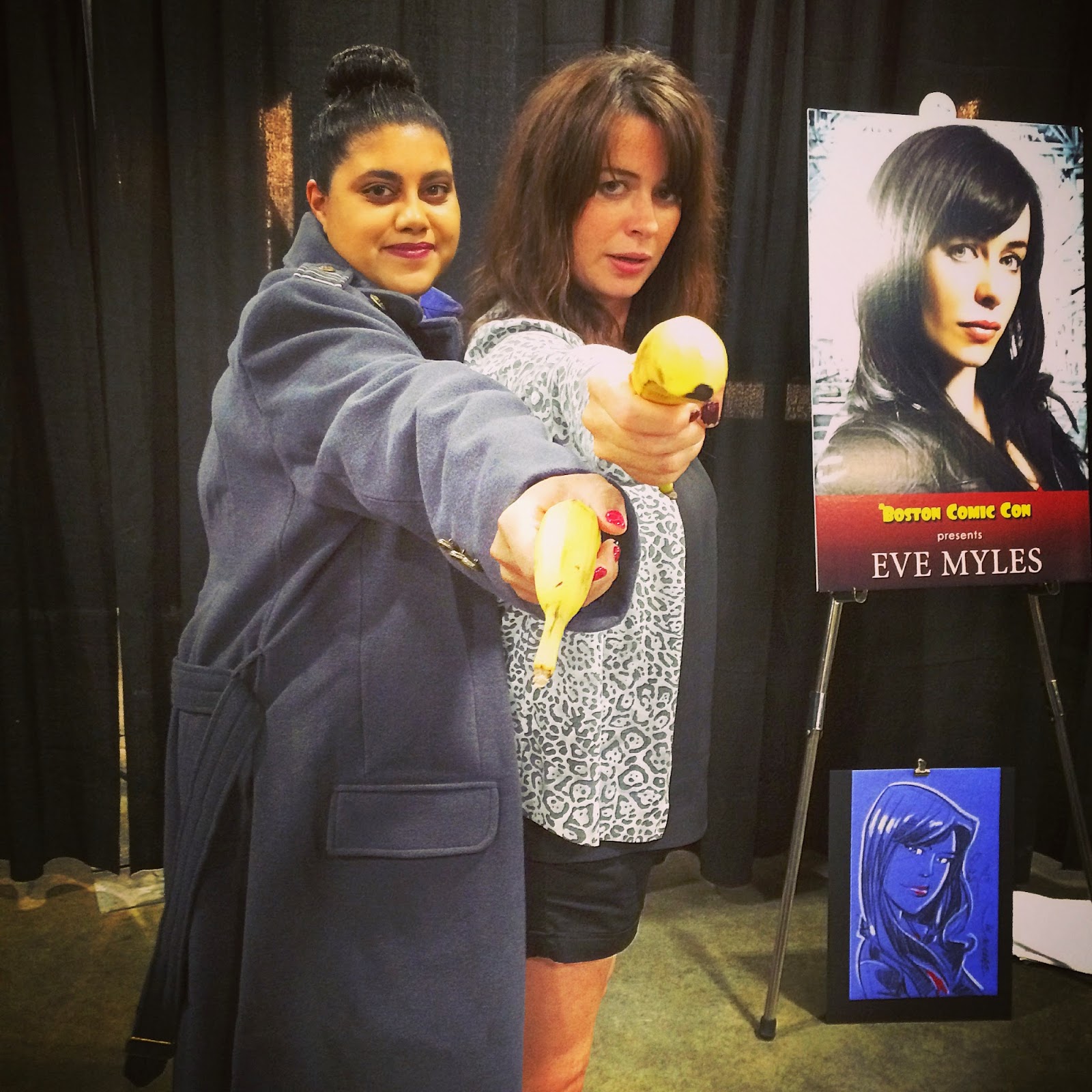 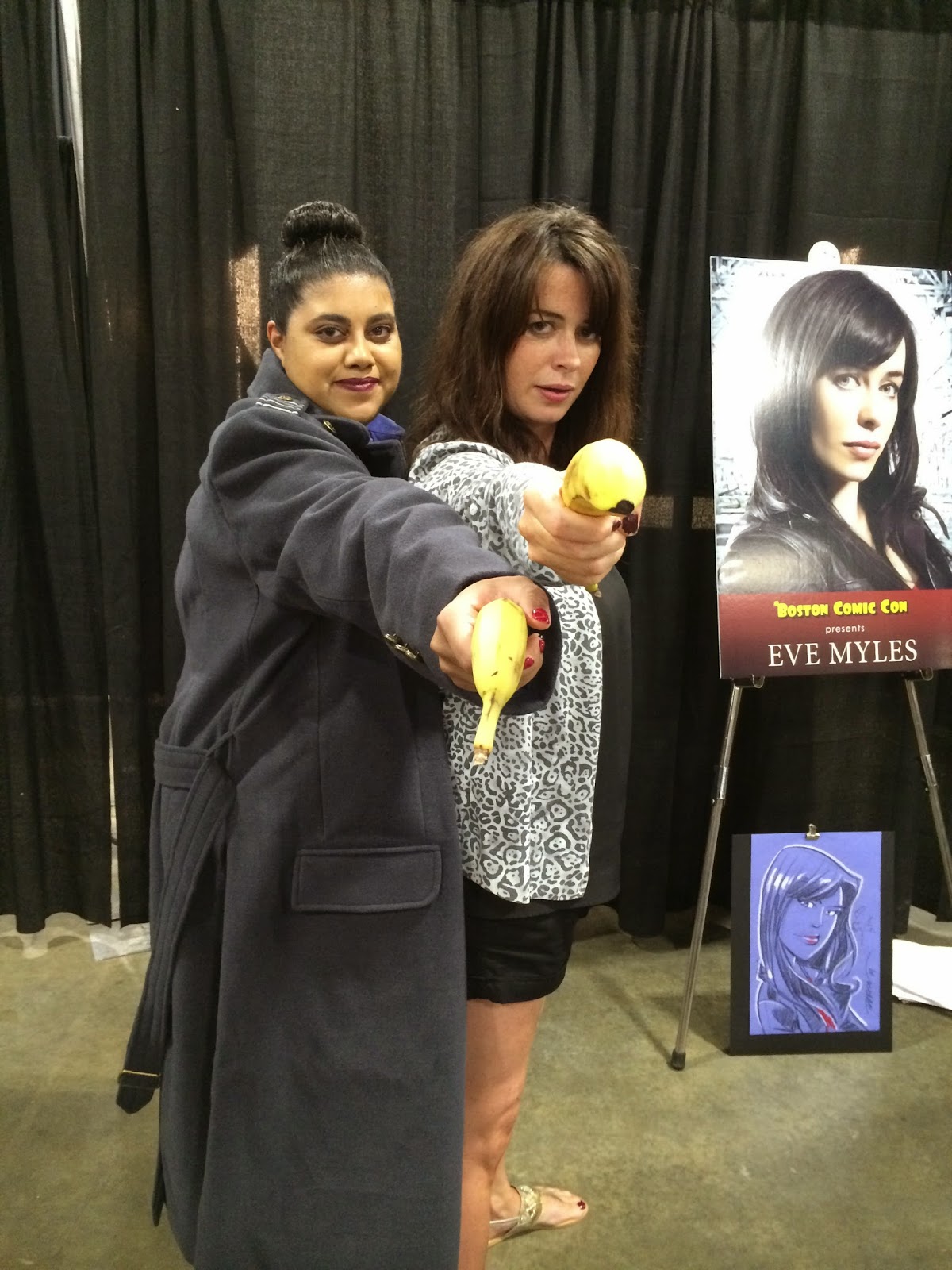 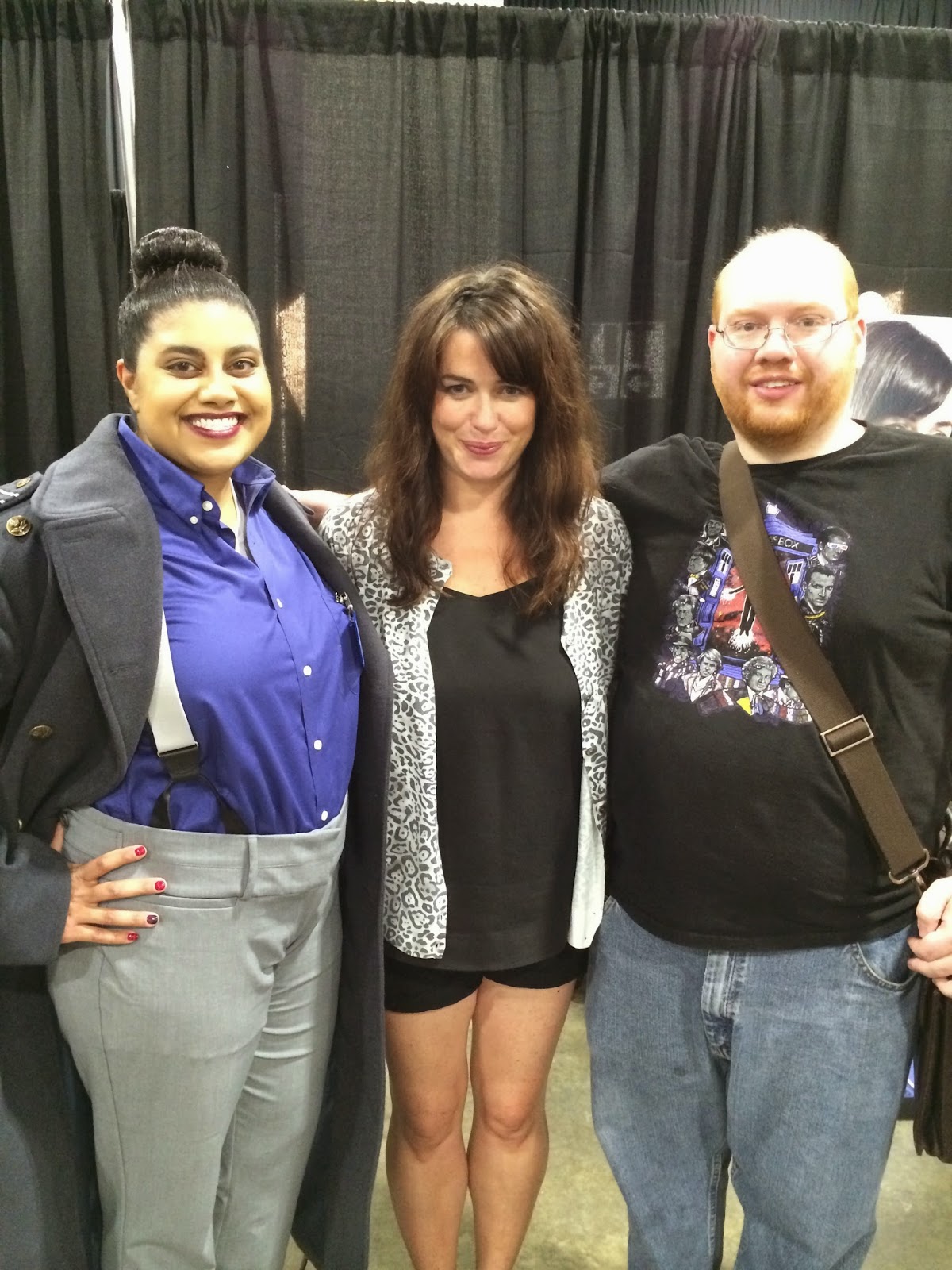 We tried to hunt down Jewel Staite, but she seemed to have disappeared. She didn't seem to be around much on Saturday at all. Oh well, we would catch her on Sunday

Giving up on Jewel, we hurried over to the amphitheater because the Torchwood Reunion panel was going to start in an hour and a half. Now, this might seem excessive to try and line up that early, but people had already been lining up for an hour before this. Try as they might to keep the area clear and send people away, a mass of about 1000 people eventually congregated at the bottom of the stairs to the auditorium. Brigid and I managed to sneak in the side near the front, but that was about the time shit hit the fan.

You see, at the bottom of these stairs was a foyer surround by a semicircle of glass with 5 doors situated at even points in this semicircle. The foyer held about 500 of these rabid fans, who were packed like sardines. I wanted to take a picture of the crowd, but I literally couldn't get my phone out of my pocket. Now, only two of the 5 door were open and the other 500+ people waiting were streaming out these doors into the convention center. The nutty part of all this?

The amphitheater only holds 350 people.

This mass of writhing nerds was composed of people who had been waiting 2 hours (while breaking the rules about where to wait as much as possible), people who had been waiting an hour or less (while following the rules) and a small war was beginning to break out as to who could get in first. Some of the 2 hour people had been pushed further back and were pleading to be let in first. The hour people were trying their best to keep them back and wanted only the front of the crowd let in. There was yelling, pushing, and some people who tried to climb the sides of the escalators and run past the crowd control people.

At this point they threatened to cancel the panel and a deafening silence fell over the crowd. The organizers asked everyone to move back, so the crowd started to move. But then, the rear of the crowd past the doors (who couldn't hear the announcement) began to push forward to keep their spot. This meant the people at the back near closed doors had nowhere to go, so were being squished and also pushed forward. People not at the edges of the crowd (Brigid and I included) began to be ground together and generally mushed. It was a miracle nobody actually got hurt.

Finally the organizers made everyone stop and began taking people 10 at a time from the front of the crowd to get in, under threat of cancellation if we made a fuss. Luckily Brigid and I got in and the panel was fantastic. Nothing I post here will be able to do it justice, so I am just going to direct you to Brigid's YouTube Channel, where several videos reside.

We went home and crashed shortly thereafter with a dinner of various snacks acquired from the nearby
7-11. Not the best of plans, but we could barely move and that was the easiest, closest thing.

That's Day Two! If you haven't checked out Day One, go here and stay tuned for Day Three!
Posted by TheUndergroundLair at 12:23 PM