This one is a mini that I have had for a while and painted up about a year ago. Its a limited edition Chaos Sorcerer that was given out with White Dwarf magazine as a subscription bonus. Since I am a lover of all things Nurgle, his patron god was pretty much already decided. 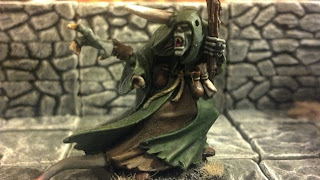 Two things are missing from this miniature. The first is a horn, which can be seen by the hole in the side of the hood.  I left that off intenionally, because I wanted the Nurgle one-horn look and the hole looked good to me as-is, so I never bothered to fill it in. The second is a third hand, just below the outstretched one. I honestly lost the little sprue that had the two alternate hands on it. So instead I painted up the remaining bracer like a scroll and mad it look like it was being grasped in a tentacle. I think its nice and subtle. 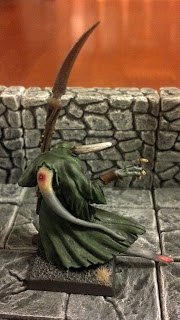 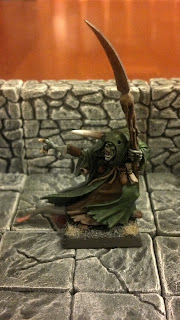 I did my best to give the skin a corpse-like feel and to make the whole model look dirty. I am especially proud of the boil on the back tentacle. The boil is just paint-work and has not been raised at all with green-stuff or putty. I left the skin around it fleshy so it could look more sore and aggravated. The metal got a dingy, not quite rusty but dirty look. I also made the ground look scorched and unhealthy 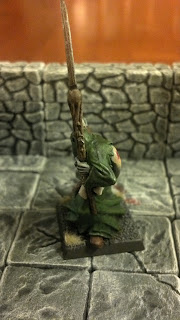 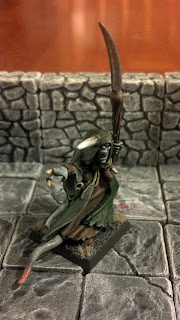 Overall, this is one of my favorite miniatures. It inspires me to do more Nurgle miniatures in the future. Since I have a whole Warhammer army full of Papa Nurgle's followers, I have no shortage of willing subjects. In addition to serving as my Chaos army's sorcerer, he has also made appearances in my HeroQuest games (as a Chaos Warlock) and most recently as the villain in a Song of Blades and Heroes scenario.
Posted by TheUndergroundLair at 11:46 AM