I am a huge fan of Hasslefree Miniatures. Every one of their sculpts oozes character and charm. I also believe they produce some of the finest female forms in the business. I have painted their cultists for Strange Aeons (among other things) and little Hayden the slayer for dungeon crawling.

This past Christmas I received a copy of their Sir Olwyn mini. I love the way he looks wise and devout, a perfect experienced mentor knight. Truly one of my favorite figures Hasslefree produces. I had plans on using him as a PC for Pathfinder and had primed him up, but then never got around to painting him. Then I found Frostgrave and realized I had a perfect templar ready to go. 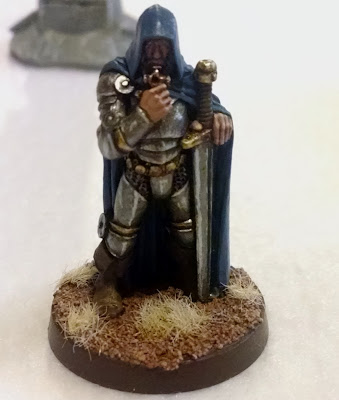 Hadrian protects his brother among the frozen ruins of Frostgrave, even having renounced his knightly order to follow him on his mysterious quest. Hadrian isn't privy to all of Amuron's secrets, but trusts his brother implicitly. Is his trust well placed? We shall see.

Templars are expensive, so they may not be the best choice starting out, but damn does he make for a pretty model on the table. 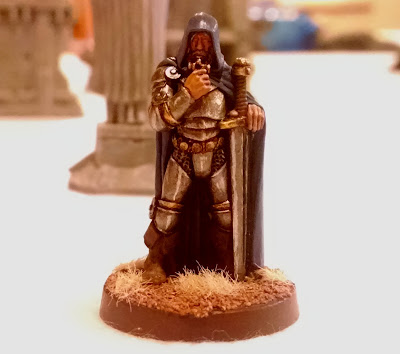 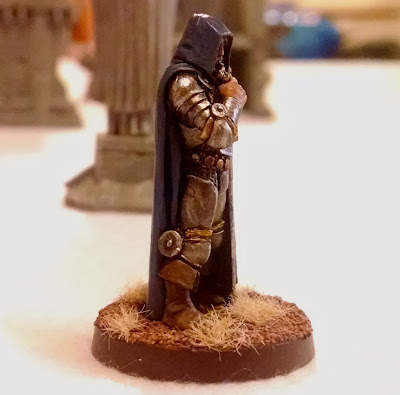 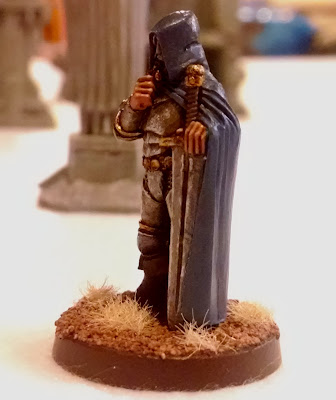 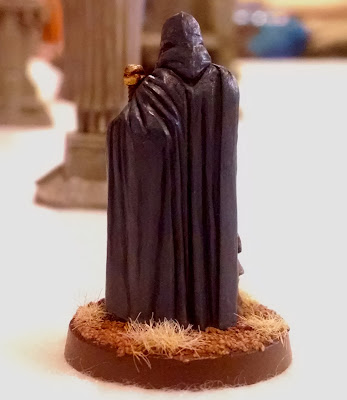 Of course my camera refuses to pick up the highlighting on the cloak but I assure you it is there. You can see that I've based him differently than my construct, having gone for a dead grass look that I think I favor over the green in the dead, frozen wasteland that is Frostgrave. I may go back and rebase the construct so he matches the rest of my warband going forward.

Speaking of frozen wasteland, I have decided that I will end up getting a Frostgrave specific mat at some point when I'm feeling rich. I want one of Frontline Gaming's Alpine mats because I think it looks perfect and I'm leaning toward 4'x4' for my games. Plus the size would ensure the mat gets used for things like 40K as well, so it's not to tied to one system.

In the interim, I went to the local fabric store and picked up a yard of white fleece to use as a 3'x3' mat. 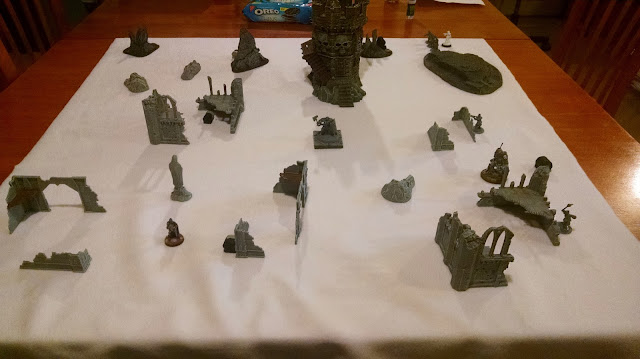 It's a little stark, but it does the trick and was less than six bucks. Really a bargain you can't beat. I'm also starting to look into some extra ruins to bulk out my Frostgrave. I'd rather not have to cast Fog all the time, so having some extra places to hide would be great.

Anway, that's all for now. Happy gaming!
Posted by TheUndergroundLair at 11:57 AM