I love skirmish gaming. I used to play Mordheim. I'm a huge fan of Song of Blades and Heroes. So I'm always on the lookout for new skirmish possibilities, and it's no surprise that I have run across Frostgrave in my internet travels. It had piqued my interest, but I hadn't taken the plunge recently until some players at my local game store started buying books and kind of forming a group. Not to be left out, I also bought a book and so far I'm hooked.

For those not yet in the know, Frostgrave is about a ruined, snowbound city filled with the treasures of a former magical empire. Each player gets a wizard, who hires a warband to travel into these ruins and find gold, magic weapons and spellbooks for glory and gain. These wizards then fight in amazing wizard battles while their minions hoof it with the loot.

There are several different classes of wizard, like blasty Elementalists and evil Necromancers, but I went with an Enchanter. I did this for one simple reason: I can make golems. Of course there's the added benefit of being able to move treasures around and make magic items, but really it's all about the golems.

Now, most people start with painting their wizard and maybe their apprentice first. Not me. I want a big stompy golem and I want it now. So I looked through my piles of miniatures and had a minor brain storm. I grabbed one of these: 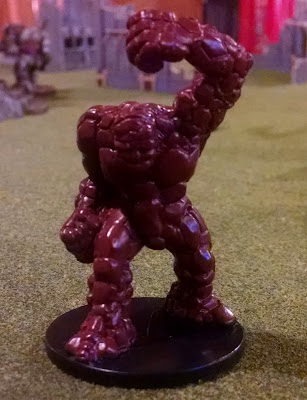 I used to buy a ton of D&D minis back in the day, so I have several of these goofy, Ben-Grimm-looking assholes taking up space in a box. A little cutting, gluing and painting later and I have this monstrous beauty: 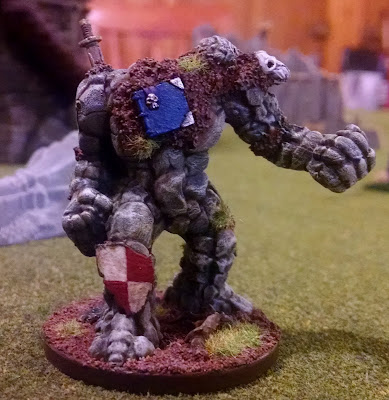 I wanted him to look less like a constructed beast and more like something dredged up from the ruins of Frostgrave on the fly. Hence the books and broken weapons. I also filled the gaps with my basing gel to make it look like he's held together with dirt in certain places, and a little static grass helps with that effect. 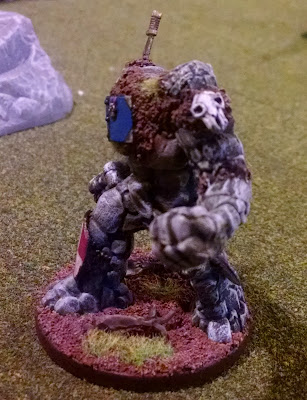 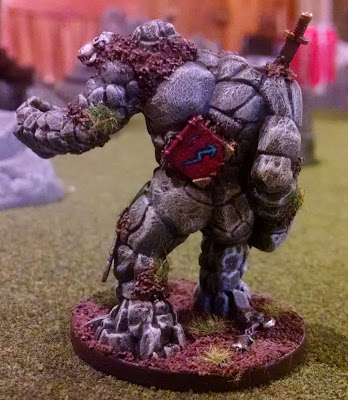 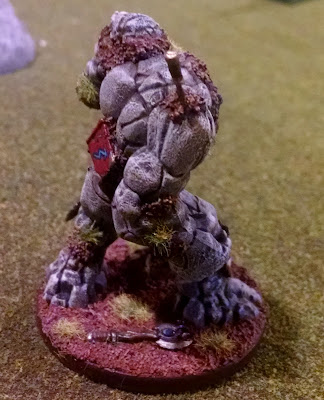 I'm really proud of him and he makes a great wall to block line of sight to my wizard and put the hurt on people who come to near.

Speaking of line of sight, I kinda noticed in my first (and only so far) game that ranged weapons are fucking awesome. So awesome in fact that I lost my whole warband and decided to start over from scratch. I also made the decision that I wanted to stop getting shot. To that end, I took the spell Fog, which makes 6" long, 3" high, 1" wide walls of you-can't-see-me that linger on the battlefield.

Since I needed something to represent these but didn't want to get too fancy or expensive, I made these: 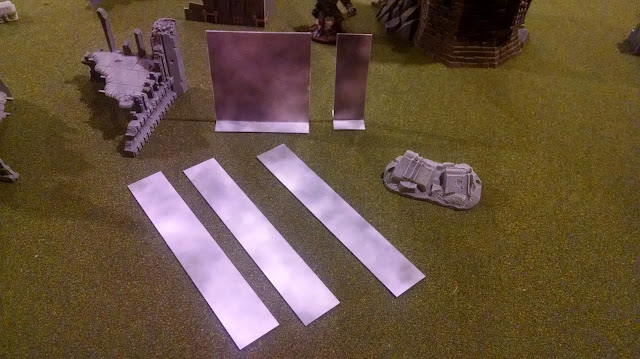 They are simply strips of thin card with a fog pattern printed on them, plus a couple of mini walls to help judge line of sight if there's any question that a model could be seen across them.

Simple, effective and if I find I need more fog I can just cut out more strips. No getting shot in the face for me.

Even though I got thoroughly housed and I have a couple misgivings with the ruleset (but that's a post for another time) I am still excited to get playing in earnest. The warband is small, so I'm hoping to get it done relatively quickly by my standards.

If not, well at least my golem looks pretty.

Happy gaming!
Posted by TheUndergroundLair at 11:34 AM