One With The Wind And Sky

Like many of my generation, I am essentially a giant child. Because of this I collect little toy men and push them around the table, rolling dice and occasionally make "pew pew" noises. I play pretend as a hobby. I obsess about things like Star Wars and Transformers. I also enjoy cartoons, and as an extension of that, Disney movies.

Traditionally, those movies have consisted of the Aladdin, Mulan and Lion King kinds rather than the Little Mermaid or Cinderella kinds, but one very princessy one has managed to squeeze in there and that's Frozen. I am not sure exactly why I enjoy it so much. Maybe it's the music, maybe it's the themes of isolation, loneliness and self-acceptance, or maybe I just have a thing for leggy, blonde queens with ice powers.


So when I heard that North Star Military figures had a set of stand-ins for Elsa and Anna, I took the opportunity to pick them up to add to my Frostgrave collection. The set in question, of course, are the Young Fire Elementalists: 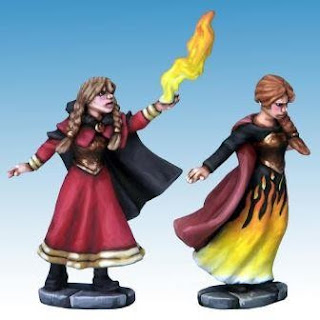 The resemblance isn't exactly subtle. They aren't exact copies of course but they're close enough. With a suitable paint job they'd look perfect in the frozen city, leading a new Elementalist warband. First up we have the snow queen herself, Elsa: 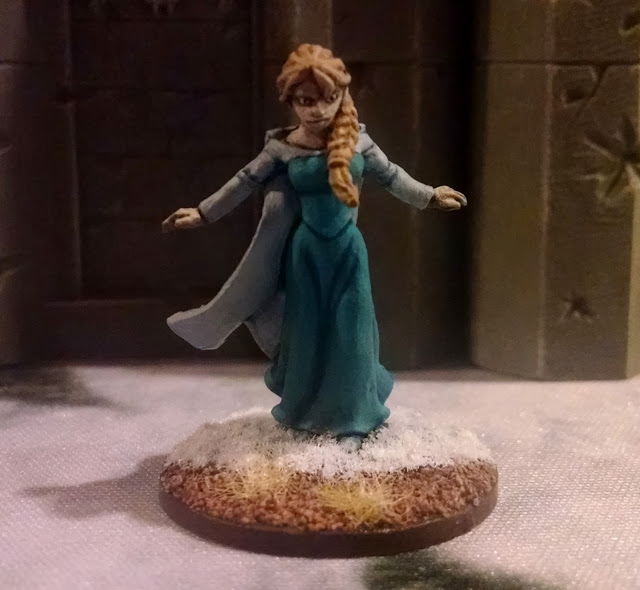 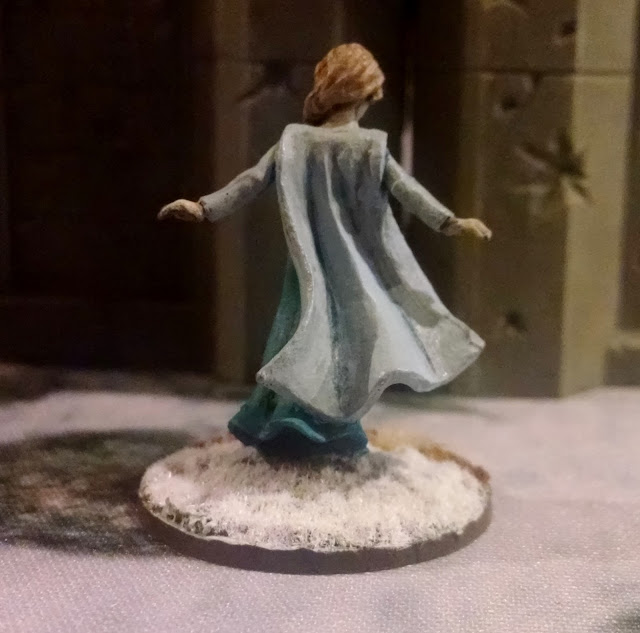 I went with really pale skin, and the rest was all swathes of cloth, which I will admit is not my strongest suit. But the colors are pretty close and the point gets across. Elsa is the wizard out of the two, and therefore the more powerful. To show this, I added snow spreading out behind her, as if leaving a trail behind her as she walks. 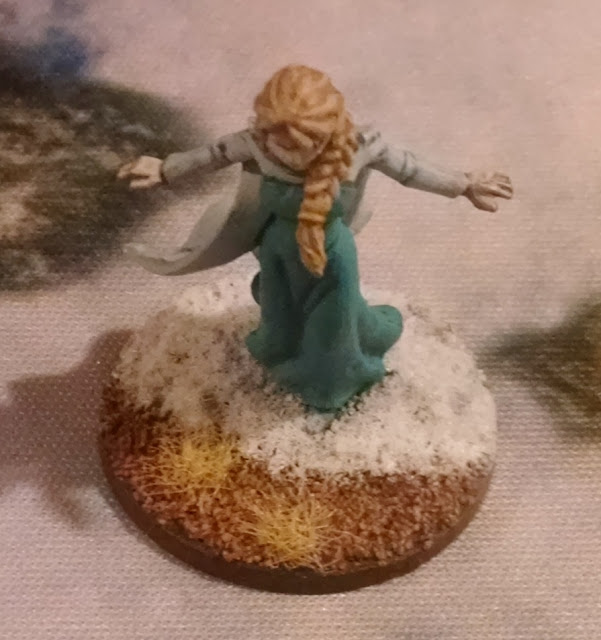 The snow is from an old tub of Citadel snow flock that up until now I had never used. I like the effect although it's a little fluffier than I had intended.

Of course Elsa is never far from her sister Anna: 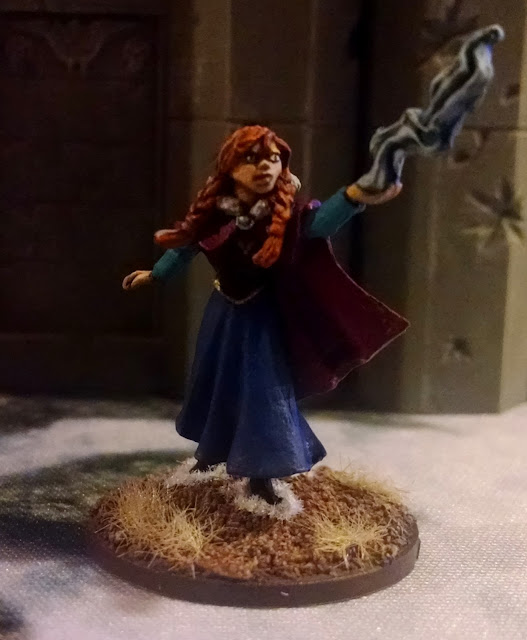 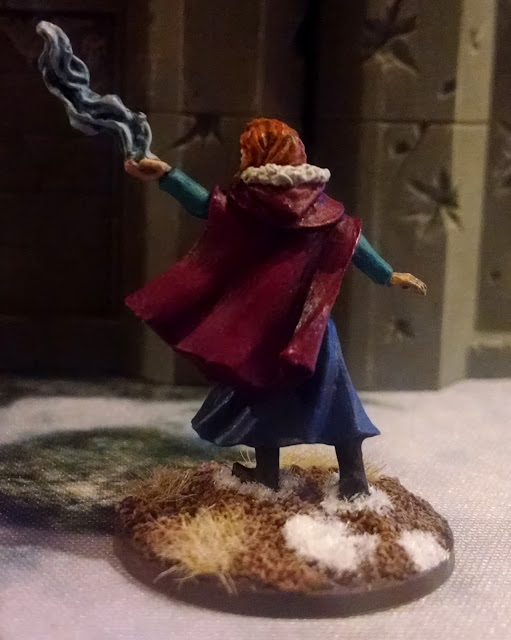 I'll admit I kinda half-assed this one. I'm not as big a fan of Anna and I sort of rushed getting this one done. For that reason I decided to forgo the agony of trying to freehand the flower designs on her bodice and skirt. I just didn't have it in me to be that frustrated.

Of course the biggest departure from the character is her actually having powers. Despite the visible magic effect, Anna is the apprentice. Because of that, I did the snow on her base as just footprints, not as extensive as her sister but still a sign of power. 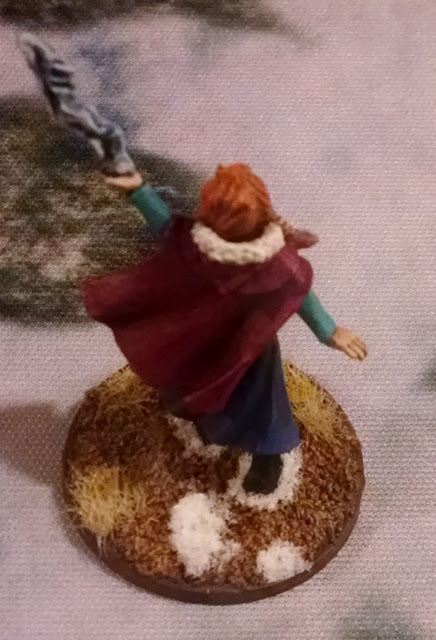 I had a lot of fun painting these two up, and while it may be a while before they get a warband assembled for them, they'll go on display for the time being. While I enjoyed the process, there are a couple of things I felt the figures fell short on. And when I say short I mean short. 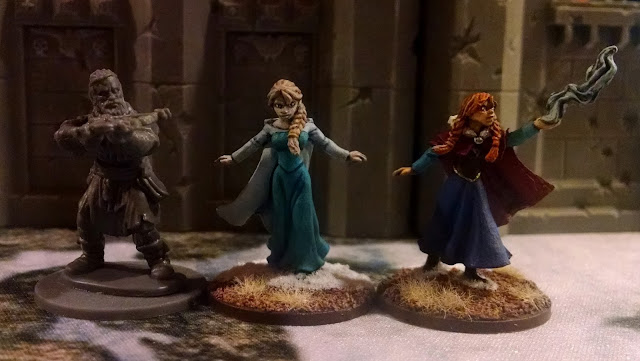 Since the models weren't originally for Frostgrave, they are a lot smaller. Not necessarily outside the range for normal human females, but enough that they look odd. They are more like a true 25mm than 28mm. The other thing I wasn't a fan of was the eyes. They are sculpted and therefore a set shape and size. This makes the eyes rather huge and starey. They almost look right into your soul. 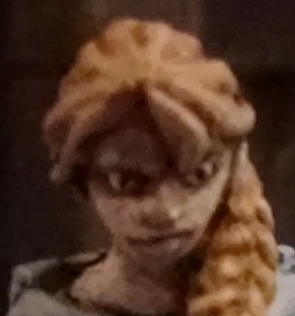 I don't really have the skill to minimize this effect, but they look better than some eyes I've painted.

That's all for now. Happy gaming and stay frosty!

Posted by TheUndergroundLair at 1:05 AM