Son of the Great White North

I haven't had much time for hobby projects lately, and posting the bloggings even less, so yeah. Recently, however, I was invited into a new roleplaying group for a Pathfinder campaign. Well I say new, but Jay, our GM, is a close friend of mine. Jay and I have been through many a campaign before, both run by him and as battle-brothers in quests run my others in our old RPG group. Most of that group is scattered to the winds these days, so it was a real privilege to get to adventure with him again.

I have always loved playing in Jay's campaigns because he has an impressive attention to detail, especially so in his Luth setting. He has run games for others in this setting, but I have never been involved in one, though I have heard the stories. I'm very excited to finally get to experience the world. So excited that I resolved to paint up a whole new character mini for the campaign.

Luth has a land filled with Viking-esque people called Oebriens, and the people of the Great White North stood out to me because some of them could talk to their dead ancestors. In game this manifests as being able to cast Augury a few times a week. I wanted to take it a bit further and make my character a barbarian so devoted to his ancestors that he gained divine magic. Thus Boros the Redhand was born.

Of course I went to my gigantic pile of Bones minis immediately. I found an amazing muscle-bound figure with a huge axe and a tiny head that was perfect. 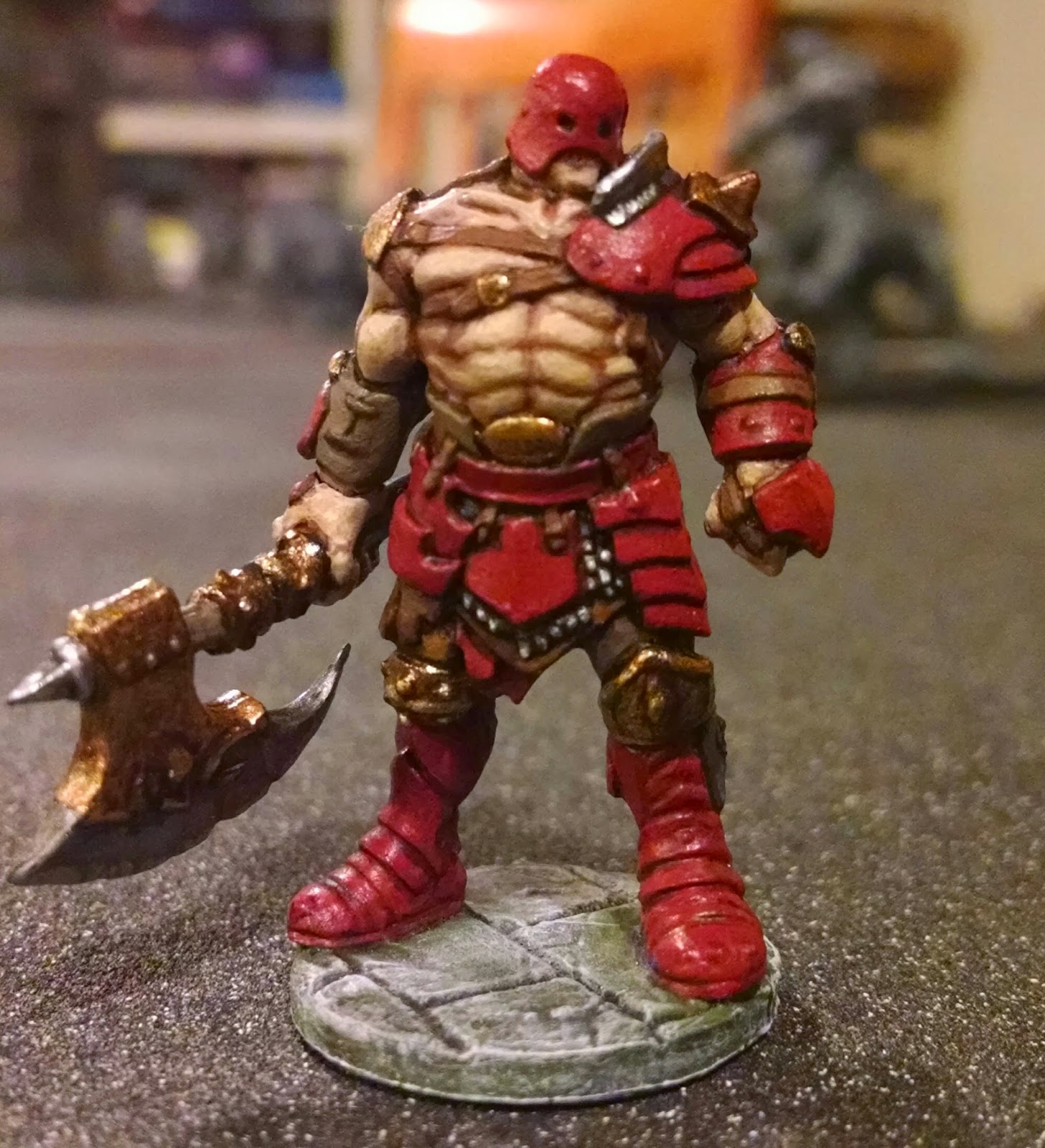 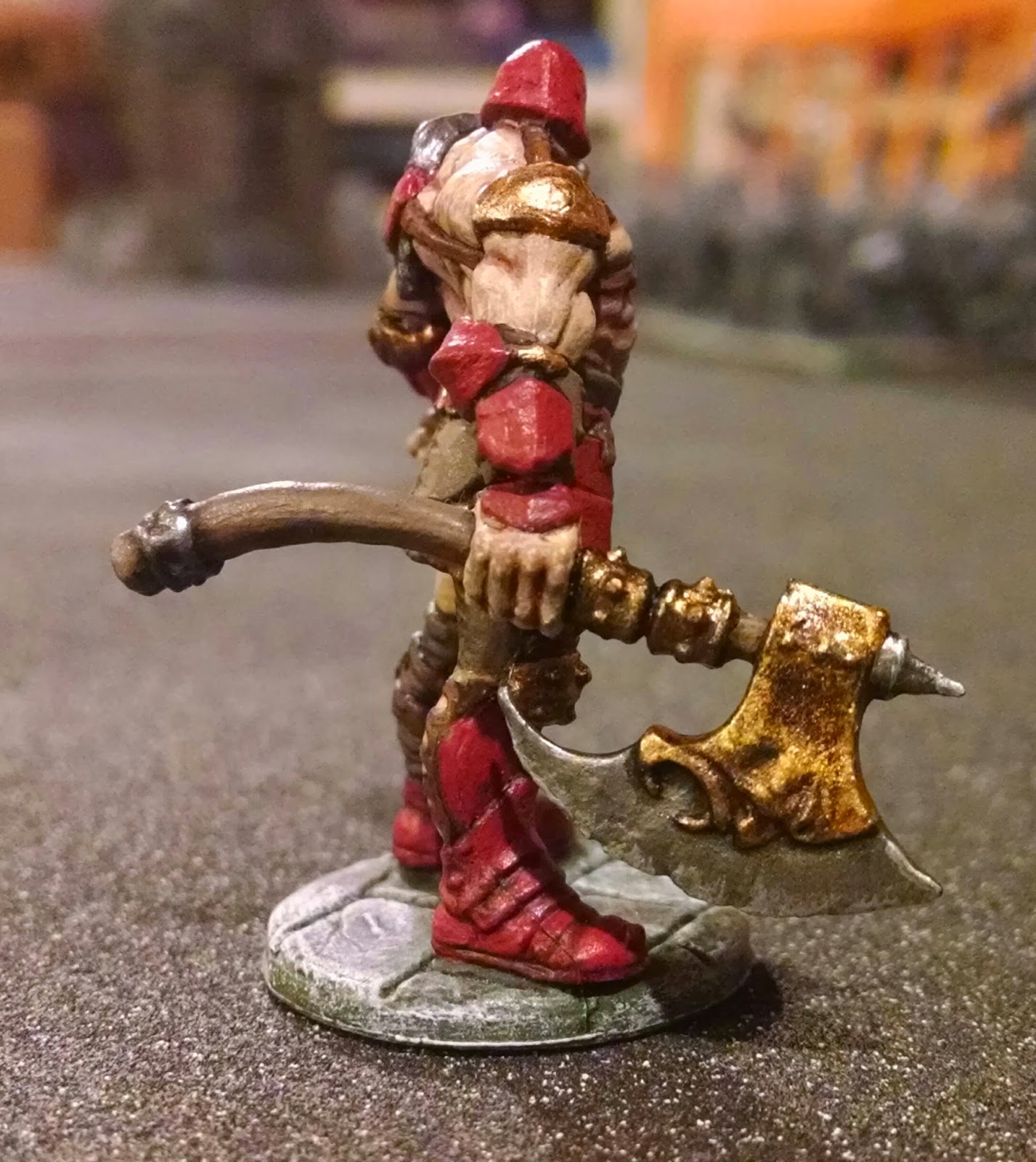 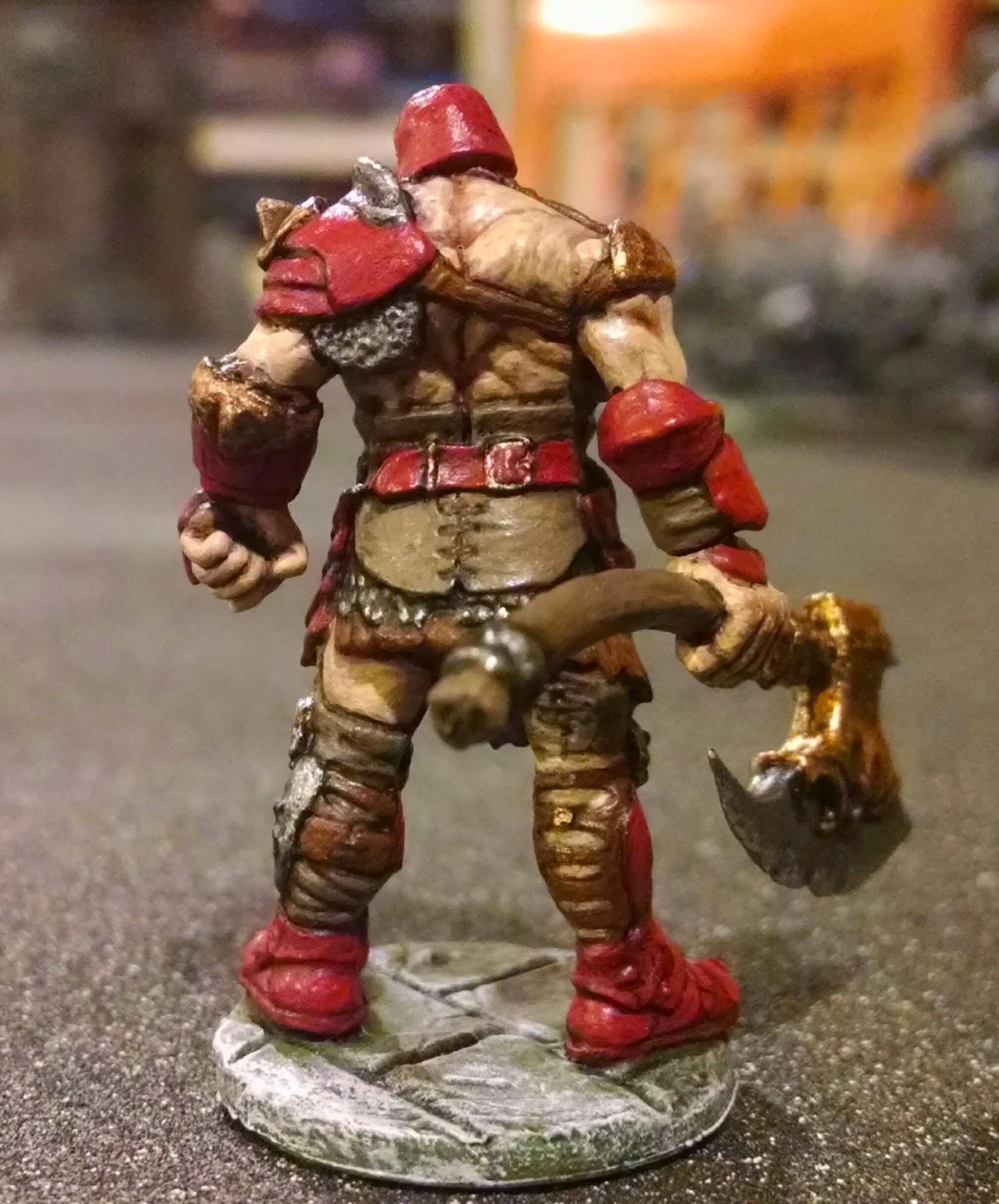 I was able to get a surprising amount of detail out of the figure. I chose a red/brass scheme as a cue from the name Redhand and because the demon-faced axe reminded me of something and old school Khornate Chaos Warrior would carry. Overall I am very happy with the result.

I also couldn't resist writing up a short character history.

The Great White North is a harsh and unforgiving place. None know this more than the Oebrien barbarians who live there. Villages are small, food scarce and warmth scarcer still. However, this harshness binds the Northerners together, sharing everything they have with each other and inducing a friendliness that, while overbearing at times, can make outsiders feel welcome. Northerners enjoy life to its fullest, with feasts and celebrations all year long. Ancestors are praised, mead is drunk and everyone lives each day as if it could be their last. In the Great White North, this could well be true.

Because farming and raising livestock are so hard in the North, many Northerners turn to raiding southern villages to feed their families. This does little to endear them to the peoples they raid, but the Northerners try to take as little as possible to survive, knowing well how it feels to have nothing. Only the wealthiest towns and villages are chosen, with poorer families spared if possible. Of course violence is inevitable and the Northerners have become renowned as fierce and savage warriors. Many towns work out a system of tribute to avoid bloodshed and some even hire Northerners as mercenaries to protect them against other would-be raiders.

It is into this world that Boros, son of Mikkel was born, in a tiny fishing village called Sutvarsk. Boros was huge, growing to almost six feet by his fourteenth birthday. His father was an accomplished raider, teaching Boros the way of the axe and it was something the boy excelled at. It was not long before Boros joined the raids himself, earning his own name next to his fathers as the Redhand. His berserk fury on the battlefield soon caught the eye of a small band of mercenaries called the Blackblades and he quickly found himself roaming far from home to the southern lands.

Boros has developed a taste for the foods of the south and enjoys cooking in that style, even having gone as far as carrying cooking tools and spices with him. The Blackblades have no objection to this, of course, and enjoy many of the Northern dishes he prepares as well.

Boros is particulary reverent to his ancestors, and communes with them often in the way of his people. So strong is his connection to the dead that some say he occasionally converses with the Great Father himself, the one common ancestor that those from the Great White North claim all men are descended from. Only Boros himself can say whether this is true for certain, but lately he has shown the ability to call on divine powers to bolster his allies and heal the wounded. Boros claims none of this power for himself, saying it is his ancestors guiding and protecting him and his allies.

For now Boros travels with the Blackblades, but his visions seem to have him troubled of late. Who knows where is ancestors will guide him next?

Of course Boros will probably find himself in my own dungeon crawling games. The following stats will work for both Song of Blades & Heroes and my own Deep Dark Dungeons supplement to those rules.

That's all for now. I hope you have enjoyed hearing about Boros and maybe soon I will be able to tell more of his adventures.