Recently I went to the first annual Vermont Comic Con. The con itself doesn't warrant a report. It was small, few guests of importance and while there were a lot of great costumes, there were also some dreadful ones too. I'm not complaining. It's the first year and it was bound to be a small show. I just don't think it needs a blog post.

That being said, one of the vendors there, Brap's Magic, had a demo of Relic Knights going and I just happened to be wandering through the gaming area at the time. I didn't see much, but I was instantly hooked.

Now, I am already a fan of Soda Pop Miniatures' stuff through Super Dungeon Explore. I own the first edition of that and went whole hog on Forgotten King, which I can't wait for. Relic Knights had been on my radar during the Kickstarter but I didn't take the plunge. I totally missed that it came out this summer. Since fortune had placed it in front of me, I decided to take the plunge and bough two faction starters for a little less than 80 bucks.

When I choose factions for games, I generally take a few things into account: looks, playstyle, relative power, etc. I also choose two factions for any game because I anticipate having to either play alone or teach others how to play who will never buy in themselves. I also like to have some variety of choice, since if I hate how one faction plays I have another to fall back on.

My reasons for choosing Cerci Speed Circuit as my main faction was neither deep nor carefully calculated. 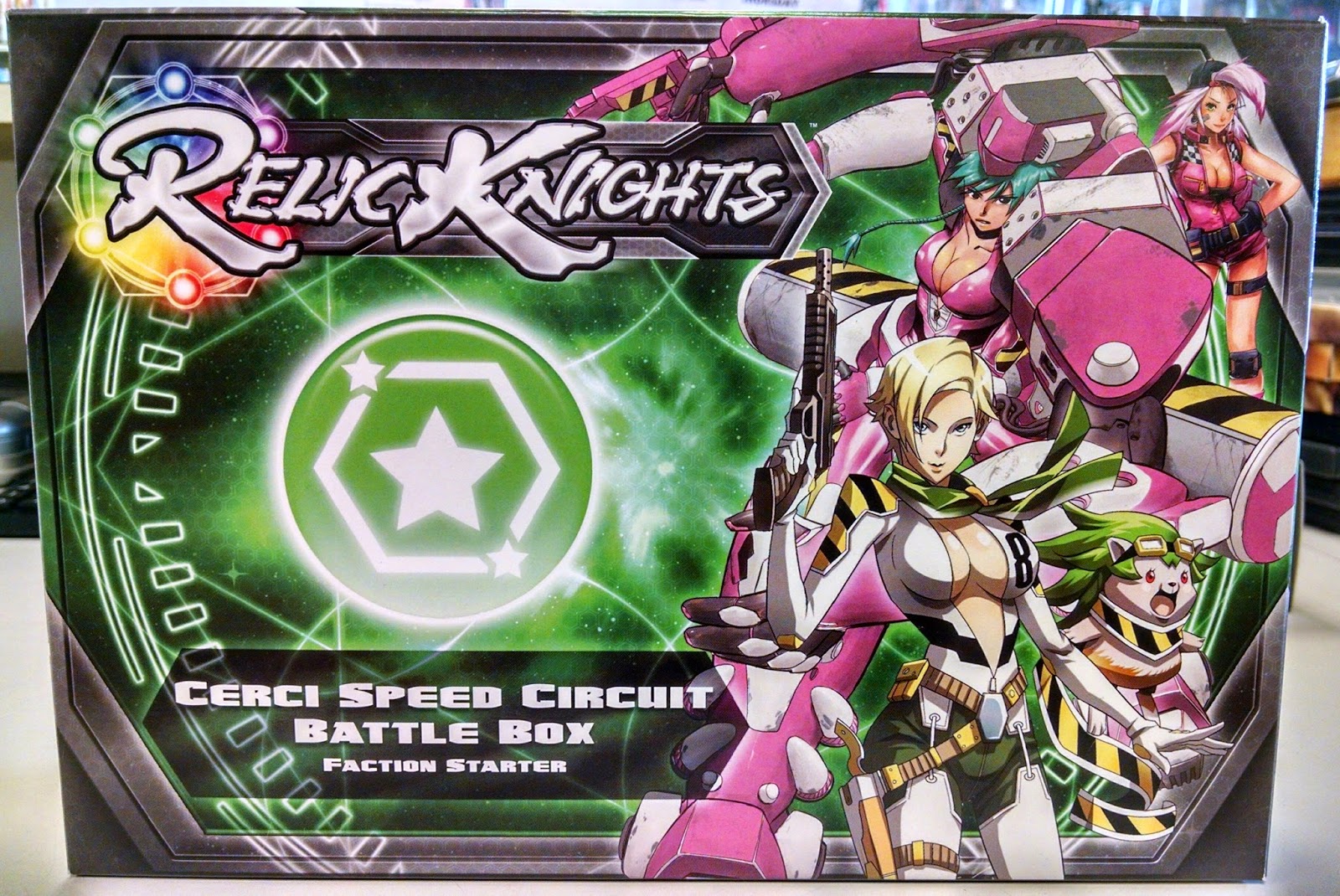 Cerci is sort of the "fan service" faction and it has a lot of ladies with big boobs on fast machines or carrying around big wrenches. But most importantly to me, the lady on the cover in the white suit is Marie-Claude, the in-game representation of model, cosplay enthusiast and occasional Soda Pop Girl, Marie-Claude Bourbonnais.

She is rather popular among Soda Pop fans and the company has worked her into their games. I also have the SDE version of her coming for Forgotten King and I'm so excited. Mari-Claude is one of my favorite cosplay ladies so it's great to get her in miniature form.

My second faction choice was more an effort to choose something opposite to the first. Cerci is good, fast, wears revealing clothing, is relatively weak in combat and has a lot of healing. I ended up choosing Black Diamond to counter all that. 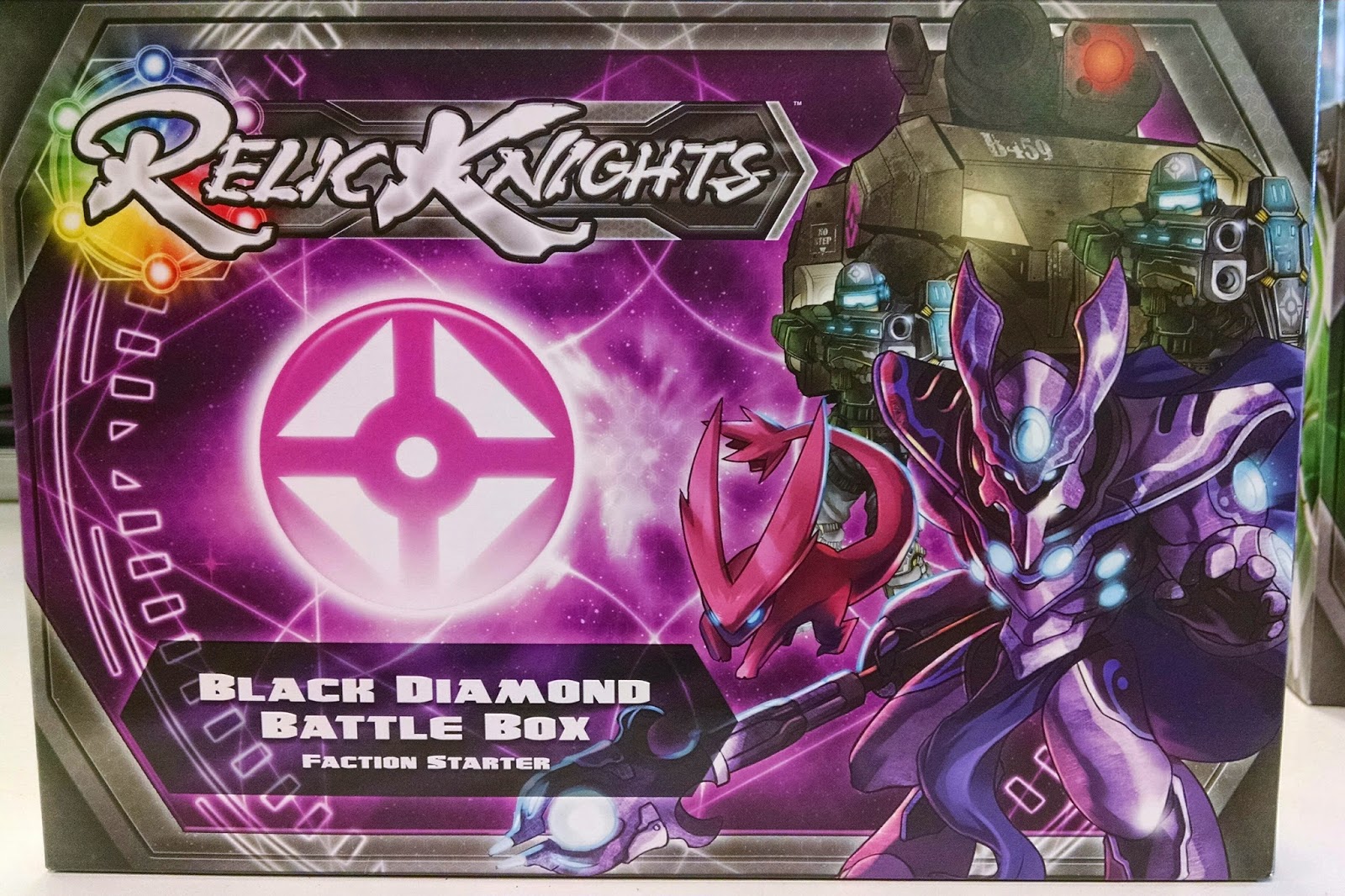 Black Diamond are unscrupulous mercenaries, have lots of heavy armor, are slow-ish but have great ranged attacks. They don't heal but they have armor and numbers. While a few of the other BD members bust out the sexy gear, the battle box has none of that. Plus I also ended up with boxes that were green and purple, colors I really like, so maybe that was a subconscious factor.

I've had these things for all of 24 hours, so take anything I say from here on out with a grain of salt. These are my first impressions, so this is kind of like an unboxing rather than a review. That said, I have read the rulebook like 3 times now, so I have a little idea of what's going on.

All in all the battle boxes are great deals. Like most starters, they don't necessarily have the best troops in them but you get pretty close to a minimum starting force and play just fine out of the box if you don't mind playing small games. Both boxes contain exactly 27 points of models and it would only take one more purchase to take it up to the minimum 35 point game size. 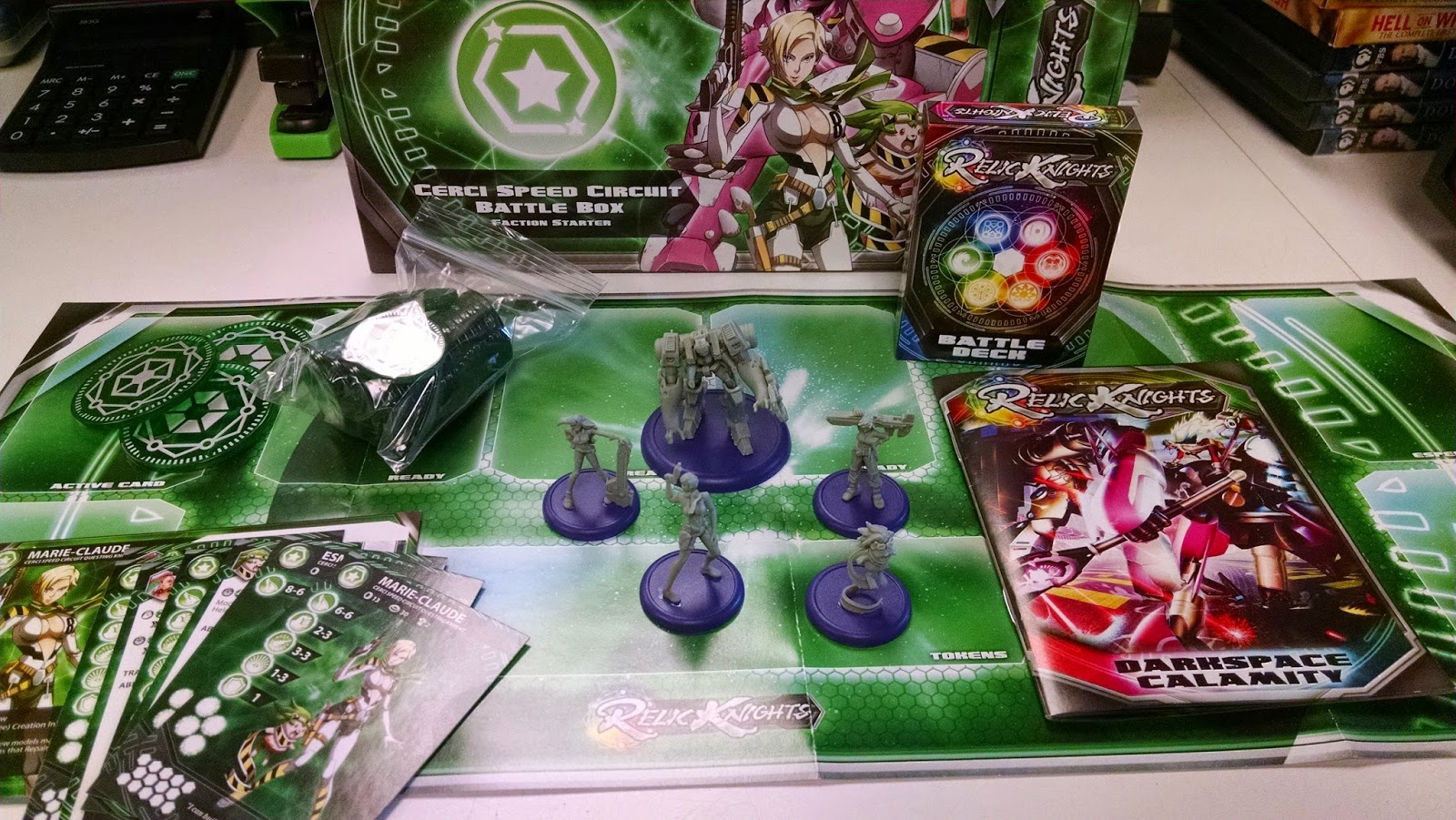 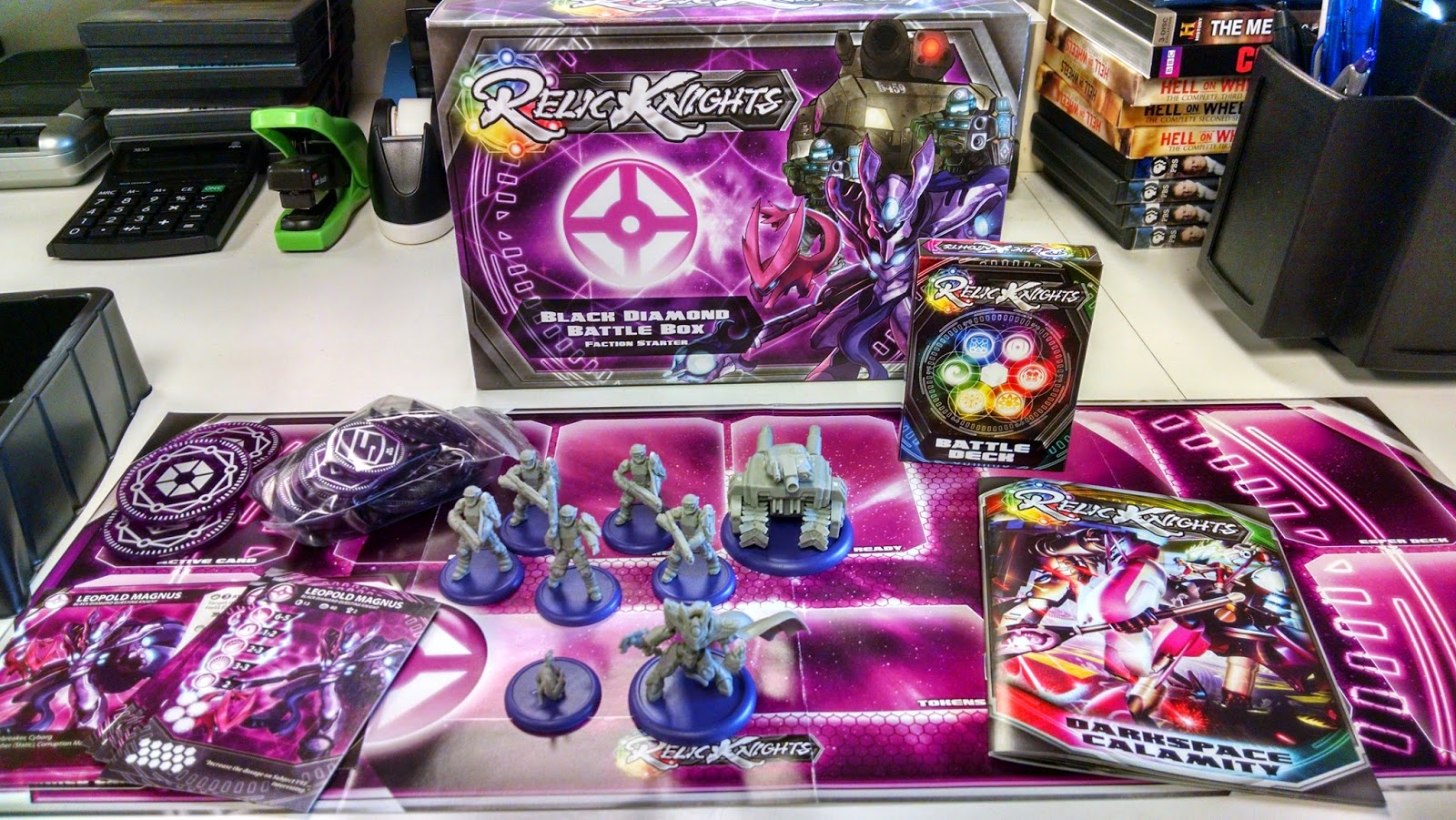 The box contains not only models but all of their stat cards, a play mat to track activations, an Esper battle deck (which everyone needs to play), essential game tokens and a rule book. This rule book isn't a page of quickstart rules but the full rulebook minus the fluff. It has REALLY tiny text and there are more than a few typos, but the rules are all there and it seems like a fun game.

The models themselves are good quality resin-plastic. The facial details could be a little sharper, so that might be a challenge if I ever decide to paint them. They were fairly easy to assemble, except for the Cerci Royal Wrecker. Never again. If you get one, my advice is to assemble the torso first, then the legs and attach together after. Mine is missing a piece because I couldn't fit it in after I glued the legs on. Don't repeat my mistakes. 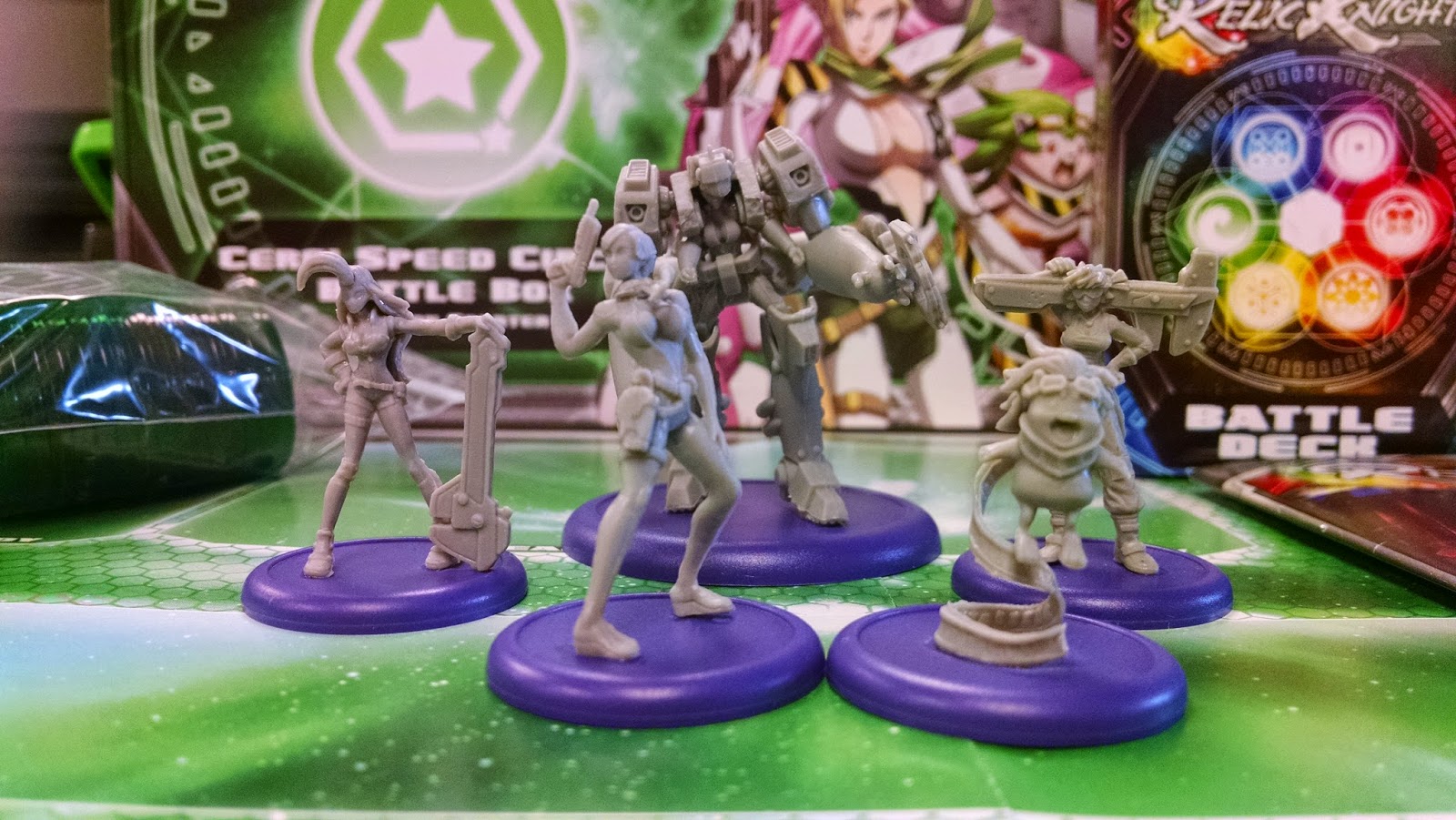 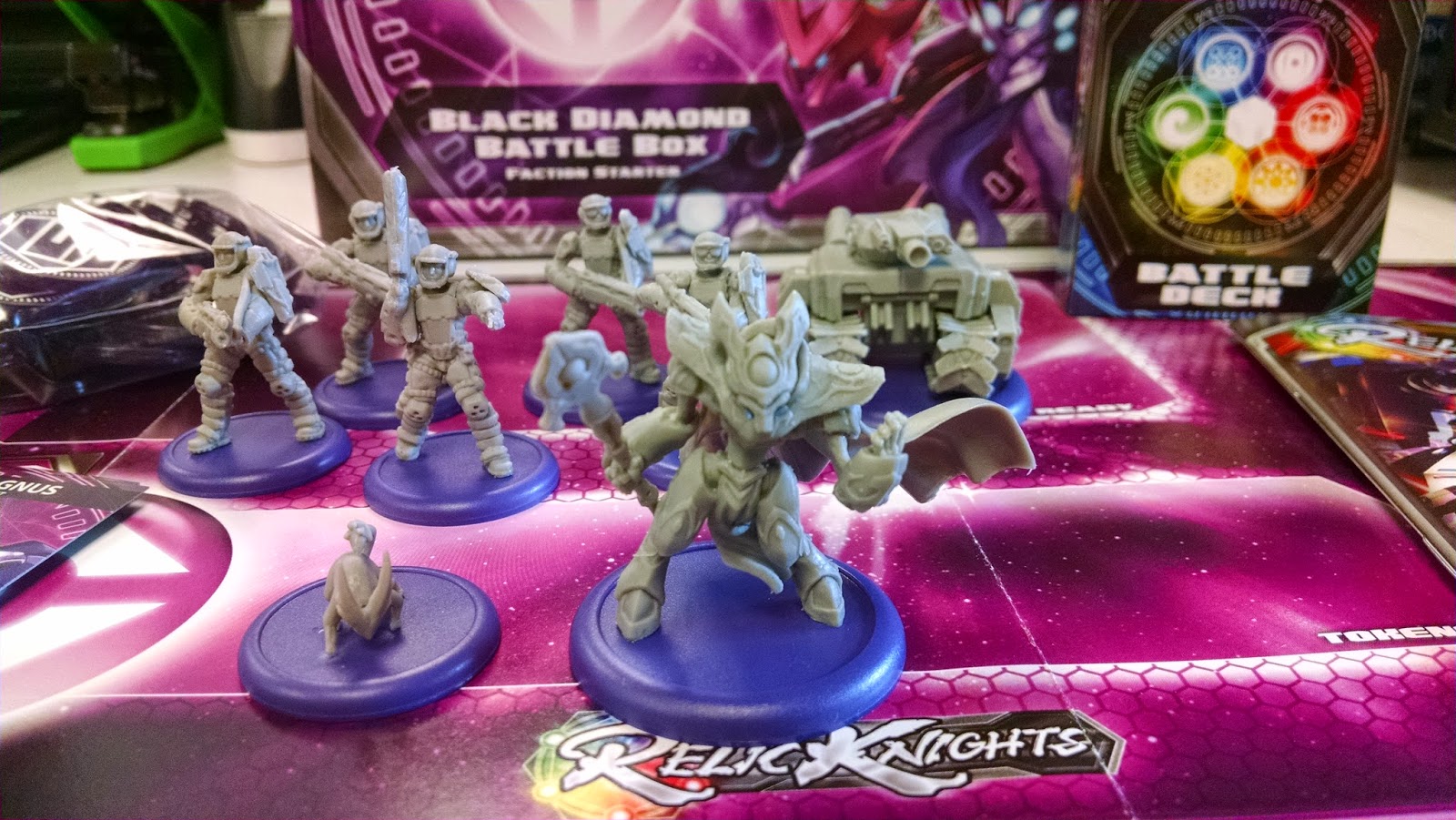 I don't know much about the fluff but the general gist from the book is that a force called the Darkspace Calamity has devoured the universe except for one last galaxy. In this galaxy, there are people called Knights who can manipulate a power called Esper and have companions formed out of pure Esper called Cyphers. These Cyphers greatly augment the Knight's power. The most powerful Knights are Relic Knights, who a have found ancient Esper powered machines to ride into battle. During the Darkspace Calamity, these knights are trying to push back the encroaching darkness, but some are trying to help it or are taking advantage of the chaos.

The game itself plays pretty slick. You have a cadre of models led buy a knight (either relic or questing) and the two sides battle it out over objectives set at the start of the game. The most interesting thing about the game is there are no dice. Each character has a set of actions that are powered by Esper, which is generated by drawing cards from the battle deck. Each card has a primary Esper type, which is worth two points, and a secondary type worth one. You can either pay for an action, which then goes off automatically, or you can't. Some actions, like attacks, your opponent can use actions to defend against. 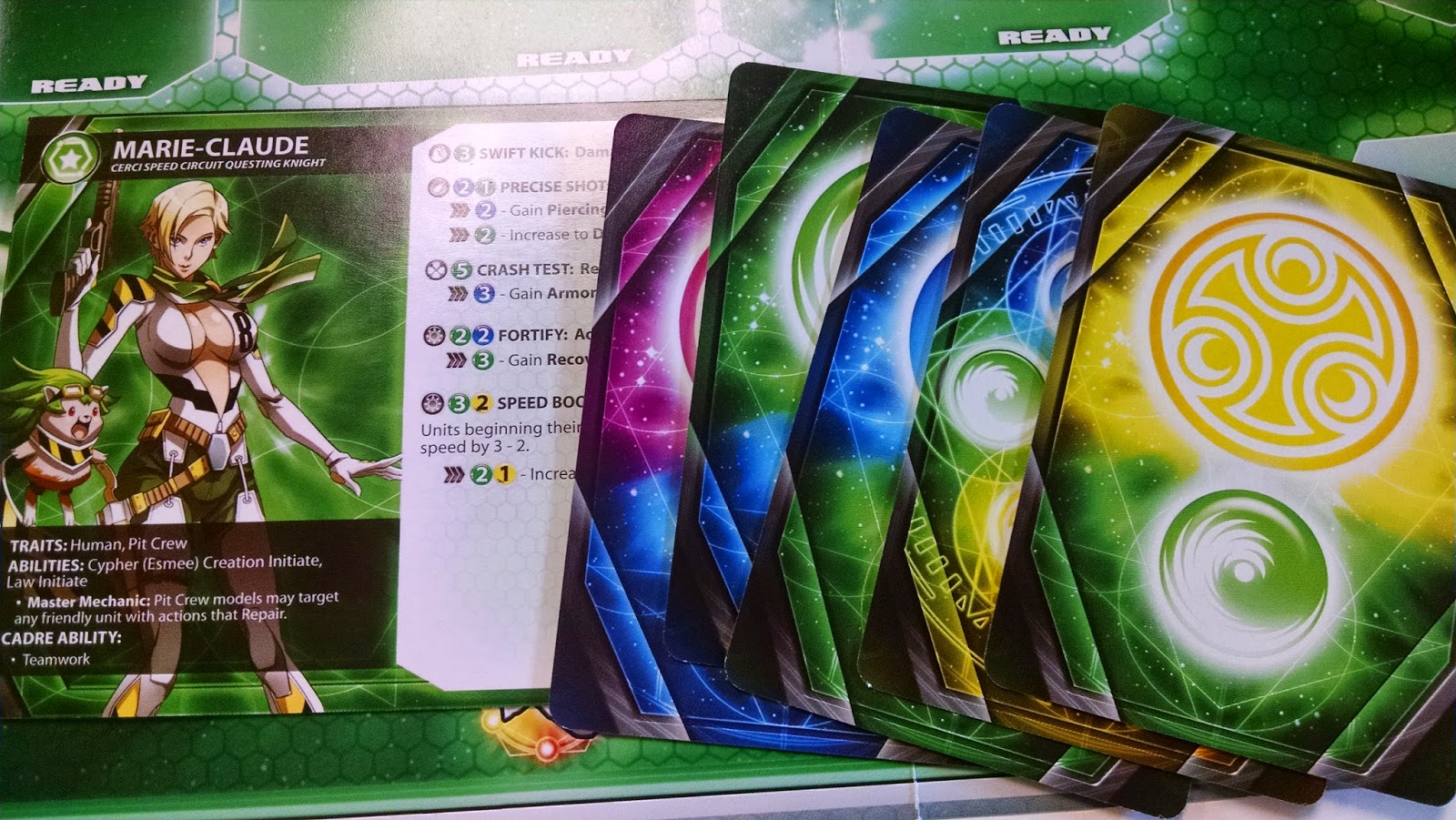 Players alternate activations in the order they set the game up at the start of the turn, meaning that the battle has a constant flow. There is very little downtime for either player. Movement is fairly unique in that all models have two movements, one before an action and one after. This means there is a lot of maneuvering going on, which helps give more tactical depth to what is generally a skirmish game with very few units.

Scenarios are also generated using the battle deck by flipping over a card for each player. The primary Esper type defines that players primary objective and the secondary type the secondary objective, as outlined in the book for each type. This means that both players will rarely be working toward the same goal and each game will be very different from the last. Games also take up very little space, playing on either a 3'x3' or 4'x4' board depending on game size. That said, you will need some space to line up activation cards and battle decks which are pretty necessary for game play, so don't get rid of those 4'x6' tables yet.


Things I Don't Like
So obviously more pros than cons and I can't wait to try a few games out. I'm not sure that I will expand my forces out very much beyond the starters, but there are a couple models I think I will have to pick up based on looks alone. And it's hard not to fall into that "must have minimum 35 points" trap.

That's it for my initial thoughts on Relic Knights. Happy gaming!
Posted by TheUndergroundLair at 11:39 AM