A Batch Of Beasties!

Last week my lovely wife and I celebrated our 1st wedding anniversary. As everyone knows the first anniversary is the miniatures anniversary. Having the awesome wife that I do, she purchased me enough stuff to get me started in the Strange Aeons game of Lovecraftian horror and mayhem. I've done some painting in anticipation of this event (since I've known I was getting it for a while now), but I haven't had anything official to work on until now.

I received not only a Bundle of the Beast, but also the Threshold Agents I and the Fishmen I packs, plus a membership in the Cult of the Black Goat, complete with Giant Deep One (and a banshee, captive and submerged Deep One). Needless to say, I have a nice pile of stuff to work on. The Threshold agents are primed and in progress, but I couldn't help but knock out the Fishmen real quick. Being mostly robes, it was easy work. I chose turquoise robes to evoke images of the sea. 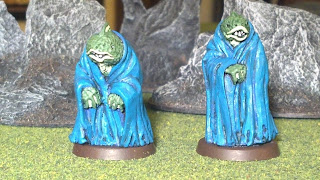 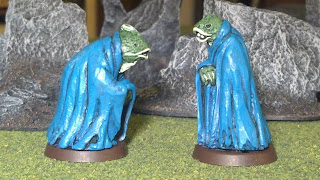 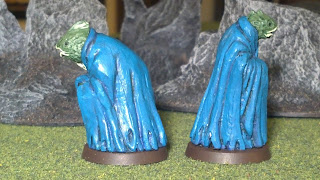 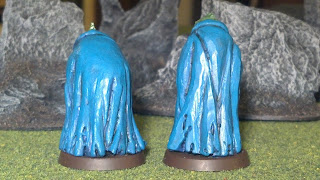 The pieces were easy enough to paint. The details are limited and subtle, and the sculpts pretty basic. I haven't worked with this particular resin material before, and I did notice some hefty flash/mold lines as well as some areas of bubbles. I'm not terribly skilled at removing/fixing such things, so I left them be. I don't think they are too noticeable. I really enjoy the sculpting style, but I will say that for the price ($12 CAD for 2 models plus $10 shipping from the great white north) I think I may be limiting my purchases. The quality to price ratio just doesn't hit as square on the head as I would like. Still, there are a few packs I will splurge on in the future if funds allow.

Slightly before I received my SA stuff, I finished off a model I've been meaning to paint for years. During my true love affair days with Warhammer (about 6-7 years ago) I picked up a box of chaos spawn for roughly half the price of what they cost now. I was a Lovecraft fan at the time as well, so naturally I built them up as Mythos-y as possible. I discovered them while searching through minis a while back and figured this was an opportunity to paint one up. I of course chose the one with the most tentacles. 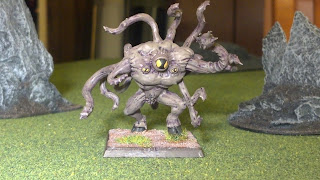 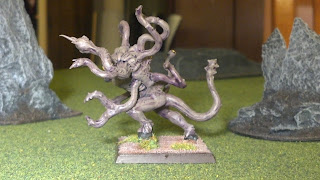 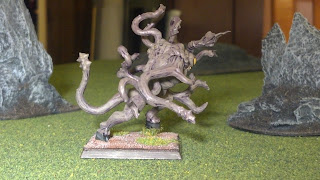 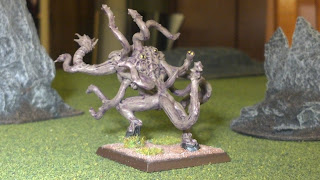 The paint job on this guy is about as basic as you can get: base, wash and re-highlight with base color. The only thing I got "fancy" on was the eyes. I went for hourglass shaped pupils and huge yellow irises to give them a really unnatural look. I figure this guy will make for a great Formless Spawn or maybe The Horror if playing a Dunwich scenario. Here he is with a victim for scale: 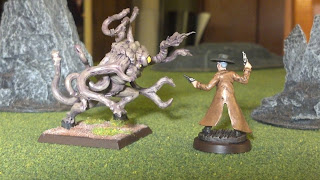 I truly can't wait to get these guys on the table. I have to finish up my agents first though. Now if I could just get past the color choice on that splendid waistcoat...
Posted by TheUndergroundLair at 3:09 PM