Shadows of the (Gaming) Past

Lately I have found myself looking more and more at games that come from at least a decade ago. I also find myself wondering why that is. For example, I have been recently enthralled in looking at the Guardians CCG from 1995. 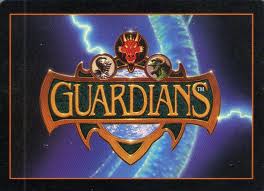 I remember loving the game because it was innovative (it had a board game quality to it), had an extremely tongue-in-cheek attitude about humor and because I was 14 and it was filled with high-quality art of scantily clad babes (for reference, I am still, essentially 14). 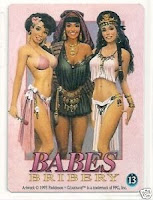 I also find myself at a loss because while I still have a load of cards,  I must have lost my actual deck somewhere and I am missing essential things like Stronghold cards needed to play. So, I immediately headed to eBay, but just couldn't pull the trigger. I think I was mostly suffering from extreme nostalgia, and I wanted to think about it more before I spent money on something old that could be used for something new.

But that really is the crux of the issue, I think. I am looking back because there isn't a whole lot of new to look forward to. I mean, I have Ogre coming from SJG via Kickstarter (that's right, I'm a backer!) near the end of the year. I have Mice & Mystics from Plaid Hat Games (adorable and you should check it out; I will most likely do a feature on it when I get it) coming in August and a new edition of Warhammer 40K sometime this year by all accounts. 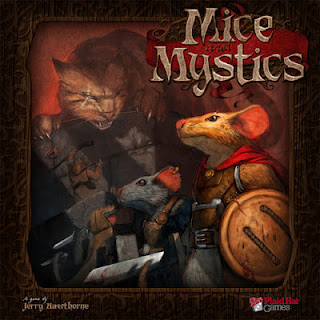 Everything else is pretty underwhelming at the moment. I should be excited for the X-Wing minis game from Fantasy Flight Games, but the price is putting me off. They also pushed back their Star Wars card game, so that's off the table for a while. There are many other games I have wishlisted, but I can never seem to get them out of the queue. I just simply don't feel inspired to spend money on them.

So I go back to the games of yesteryear. I think there are a number of factors at work here:

So, yeah, I may be scrounging up old parts for WarhammerQuest (not cheap but a fantastic game; only need  a few bats to finish it off), getting a couple of starter decks for Guardians (haven't yet, but really I'm just delaying the inevitable) or hunting for an actual set of paper stand ups from TSR's DragonQuest board game (impossible as far as I can tell). Hell, I regularly pull out my HeroQuest set and it is probably my favorite game of all time actually. 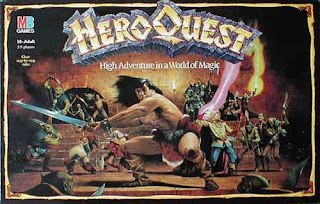 All of these games are around 15-20 years old now, but I am having a lot of fun, and that's what gaming is all about, in the end. It doesn't matter what game you are playing as long as you are having fun.
Posted by TheUndergroundLair at 10:26 AM