Many years ago I was allowed to purchase the DragonQuest board game. I say "allowed" because my parents were vary wary of anything carrying the Dungeons & Dragons name and even though they had bought me HeroQuest previously, the anti-D&D paranoia was strong in culture at the time. Somehow I was immediately going to start worshiping demons if I pretended to fight goblins that weren't on a board (we now know that it takes decades for such things). But since DQ still had a board and little stand-ups, it was perfectly ok in their eyes. Of course it turned out it was really just D&D "lite" and the board really just a map. It wasn't long after that I (and possibly my new demon lords) convinced my parents to let me charge headlong into D&D proper.

One of the best things about DQ, however, is that it came with everything: Stand-ups, a map, dice, a few plastic figures for the heroes and, in the deluxe edition that I had managed to grab, there were metal versions of those figures. Of course being young, I quickly lost the plastic figures. Eventually I bought more metal figures and soon had no need for the stand-ups, so those disappeared too (and I would love to replace them without having to buy a new set). I even managed to lose a couple of the metal figures, but whilst digging around I found the remaining heroes and decided to paint them up. I even had so much fun that I purchased replacements for the lost ones and painted those too. 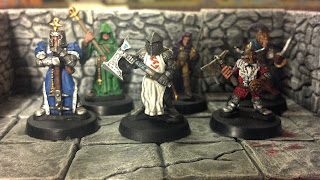 I really am in love with this set. I used it for all of my early D&D adventures and it most recently became the basis for my favorite Song of Blades and Heroes warband.

My favorite has always been the cleric: 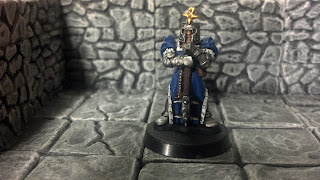 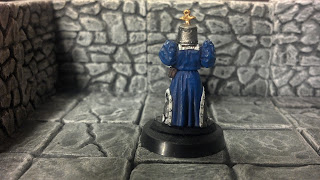 The figure has always felt like epitome of the classic cleric: stoic, covered in heavy armor and wielding a huge, heavy blunt object in the name of his god. I chose blues and whites to give him a "good" appearance, since those colors are usually associated with good.

I have always liked the wizard of the set as well: 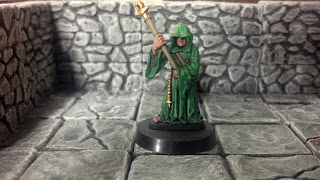 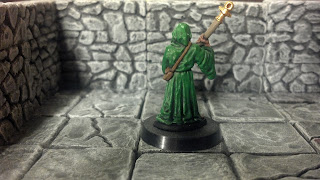 Of course, I now know that the figure was originally a cleric as well, but the robes and the staff still seem to fit a magic-user. I still think of it as a wizard when I look at it. I chose a strong green to make him stand out, but also so he could double as a druid easily. Lately he's been either an elf or half-elf too, and green seemed to fit those as well.

Next up is the dwarf: 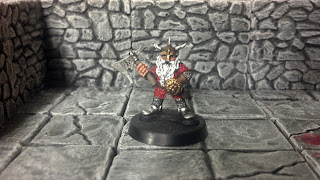 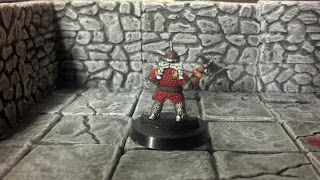 He's always seemed tough and I love his armor because its understated but still gives the impression of being heavy. I chose the red and white coloration as sort of a tribute to the HeroQuest dwarf. I also made the buckler bronze to keep the model warm-looking but stand out from the rest of the model.

My least favorite has always been the thief: 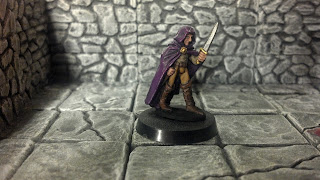 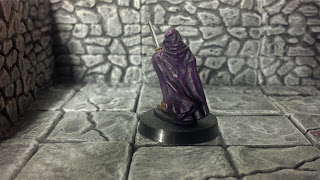 My objections to this model have always been based on his indistinct race. He's short, but not quite short enough to be a halfling. He's not quite tall enough to be a human, but too hawk-nosed to be an elf. Still, he is a quintessential cloak-and-dagger thief. I chose purple to keep him shadowy, but retain a splash of color.

The elf was also one of my favorites: 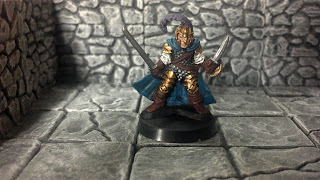 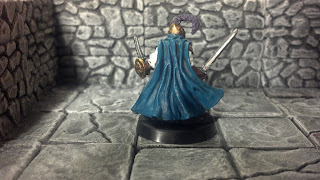 I liked the elf so much that I played a long string of elves and I had actually painted him once before. Originally, I had decided he must be a ranger, so his first paint job was all greens and browns. It was also atrocious, so I stripped the model and re-painted him as more of a swashbuckler. The turquoise cloak suggests "seafarer" to me and the puffy white shirt says "duelist". I went with bronze again to warm the model back up.

Finally there is the paladin: 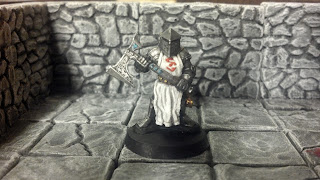 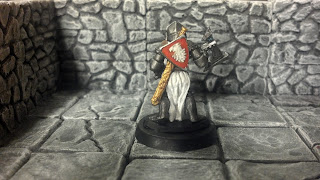 I had the most trouble deciding how to paint this one. Eventually I settled on a templar theme with white, but I wanted to stay away from red as I had already used that combination on the dwarf. I chose orange because it was still in the red family and I really hadn't worked with much orange before, so I wanted the challenge. I tried to keep the armor dark, to contrast with both his weapon and to keep him different from the cleric. I also chose blue runes on his axe to catch the eye and contrast with the orange.

All in all, I am very happy with the end result. It was fun to paint some classic favorites and I am really starting to appreciate the old Ral Partha minis again. They seemed fairly understated, had little in the way of gaudy detail, but still had more character than a lot of minis today. I know I have more stashed away somewhere, so I know more will find their way to the paint table and onto the blog.

Maybe I can still find my owlbear...
Posted by TheUndergroundLair at 12:51 PM