Favored Enemy: The Lord of the Rings LCG

Since I am between ideas on my dungeon project and not feeling much in the mood to do any painting, I have decided to do something a little different. This post is going to be the start of a new series I will be posting every once in a while called "Favored Enemy", which will focus on my favorite games that I am currently playing or that I want to talk about. I am NOT going to try and review the games I talk about in this series. I am just going to talk about the things I like, what I don't like and anything else that pops into my head.

The first game I want to talk about is one that carries one of my favorite themes: The Lord of the Rings Living Card Game. 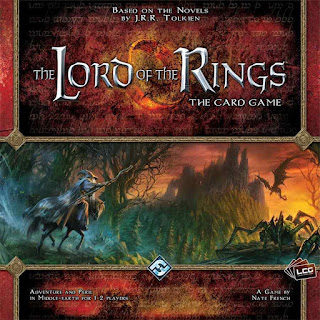 The first thing that drew me to this game is, of course, the fact that it is Lord of the Rings. That's not something that necessarily makes a game an auto-buy, but it does grab my attention immediately. I have definitely purchased games that turned out to be less than satisfactory based on this (LotR HeroClix, for one), but it rarely steers me wrong and I usually end up with some great games (The LotR Strategy Battle Game is high on my list for best fantasy skirmish games).

But, the LotR name combined with the fact that it is a 1-2 player solo/co-op game made it an instant addition to my collection. I am mostly a solo gamer these days. This stems from a number of reasons, but is mostly because my regular gaming group has spread out all over the country these days, leading to only getting together for Skype RPG sessions. I also suffer from varying levels of social anxiety, so I rarely move out of my comfort zone to find new gaming partners. Solo/co-op games give me the outlet I need when playing games without having to go through the trouble of trying to find more players. I even play a lot of 2 player games solo by playing both sides. The 1-2 player nature of this game kind of lets me do both.

Lastly, it is also one of Fantasy Flight Games' living card game series. I love most of FFG's catalog and the concept of getting all the cards you need in any expansion you buy is wonderful. As a MTG player, I already get my fill of random card packs and card scrounging. While the core set of LotR lacks a few copies of some great cards, I can live without the max 3 that I can use of those cards and even if I couldn't, the cost for 3 core sets pales in comparison to some CCGs. So far, I'm good with one core set and couple expansions, but I do plan on buying more.

Basically, you choose a scenario and its accompanying pre-set encounter deck to play against using a deck of player cards you assemble yourself. The core set comes with pre-set player decks you can use, but deck-building is extremely fun. By no means do you need to buy more cards, but you will find that some scenarios are harder than others, and not all decks are equal against all scenarios (even ones you build yourself). You get 3 heroes per player and you can play some favorites from the books, like Aragorn, Legolas, Gimli or Glorfindel. Other characters show up as allies, such as Faramir, Arwen or the powerful Gandalf (probably the best card in the game; never leave home without 3 in your deck!). You send some characters questing against the threats on the horizon, making progress in your quest if you succeed or raising your threat if you fail. Then, fight the foes that attack you from the deck. Reach 50 threat or lose all your heroes and you lose. Accomplish the scenario goals and you win. Simple enough.

Now, there are 2 ways to play solo: A single deck, or 2 decks and acting as 2 players. Running 2 decks works just fine with the rules as given. The challenges are pretty easy to tackle with 6 heroes and decks meant to support each other. I haven't played more than a couple games this way, but I am convinced that this is the way it was meant to be played. The scenarios just seem to be weighted toward having 6 heroes and there are some keyword (Sentinel, Ranged) that only function if you have another player. I assume actual 2 player functions the same way except that you have to deal with another person who may mess up your plan.

A single deck is significantly harder to play and you really have to tailor your deck heavily to take on specific quests. Your deck really needs to be able to do everything. Even then, it is extremely difficult. I lost every single game I played until I decided to use the "Basic Game" rules in the back of the book and eliminating shadow cards from combat (or rather I deal one less than usual, which normally becomes 0 but some monsters add extra shadow cards). This makes combat a little more predictable and eliminates some truly nasty effects. Maybe once I feel comfortable again, I'll go back and start adding in the shadow cards to give myself a challenge. I haven't as of yet tried house ruling Ranged or Sentinel to work in single deck solo because I really haven't needed either yet, but it would be nice if they had some effect. There are still some scenarios where they can be useful, even if they don't work as written in the book.

I am by no means a master of the game yet. I have yet to attempt a quest with more than a medium (4-5) difficulty level, and I still lose 50-75% of the time (except the intro quest; that I pretty much destroy every time now). I recently picked up the Khazad-Dum set and a couple of expansion packs, so my deck has gotten a tad better and I am learning new tricks. Currently, my deck looks like this:

That's all for the first installment of Favored Enemy. If you haven't tried it yet, I really recommend giving this game a shot. The learning curve may be high, but that's half the fun. As a card game it's expandable, relatively portable and comparatively cheap to get a good collection. If you feel like expanding past the core set, the Khazad-Dum expansion is a must have. There are lots of great cards in it and worth it for the box alone (but that's the subject of another feature).
Posted by TheUndergroundLair at 3:27 PM