Death In The Dark

Hello patient friends and people who have stumbled onto my page for the first time by accident or from some link I posted somewhere!

It has been a long time since the last post but I figured since I played an actual game of Deep Dark Dungeons that I should use this conveniently named page to share my session. I sort of threw something together kind of slap-dash, but a few encounter tables and carefully selected miniatures later I was off!

I ran a low-level adventure of around 160 points and I'm finding I'm enjoying these sort of adventures immensely. They are very much more tense, and require smaller numbers of figures which fit better into small dungeon rooms. I'm toying with the idea of making it the default setting, but I worry that for one-offs that you miss out on some of the crazier encounters.

Using my dungeon terrain I constructed a 6 room dungeon to explore. 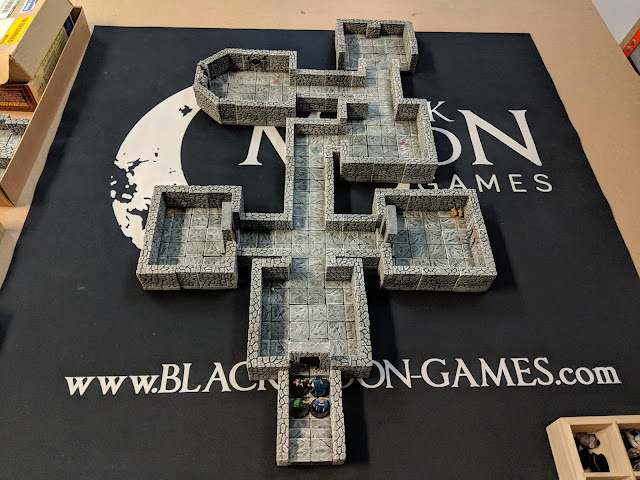 I went with a classic party of dwarf fighter, elf rogue, human wizard and human cleric. The first door was opened and right away I got a challenging encounter, a medusa! Or not so challenging as the elf rogue dashed in and shanked her, killing her dead in one blow. Go us! 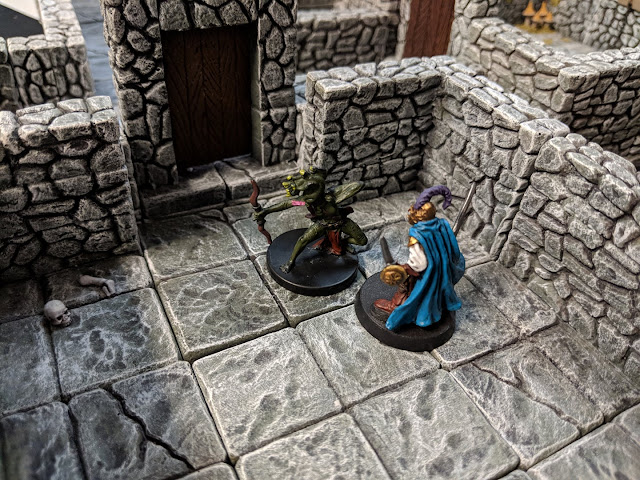 Of course as we moved further in, a random encounter had some goblins return home and immediately swarm the elf. A few sharp knives later and I was down one party member in room one. Go us? 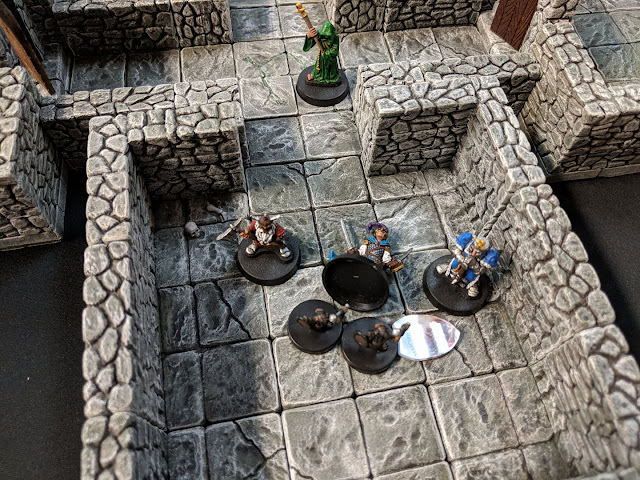 The next room yields a weapon rack, and the cleric needing to pick up some slack left by the loss of the elf decides to search it. He ends up with a masterwork weapon and a curse for his troubles, lowering his quality and combat by one. I beginning to see a pattern develop here. 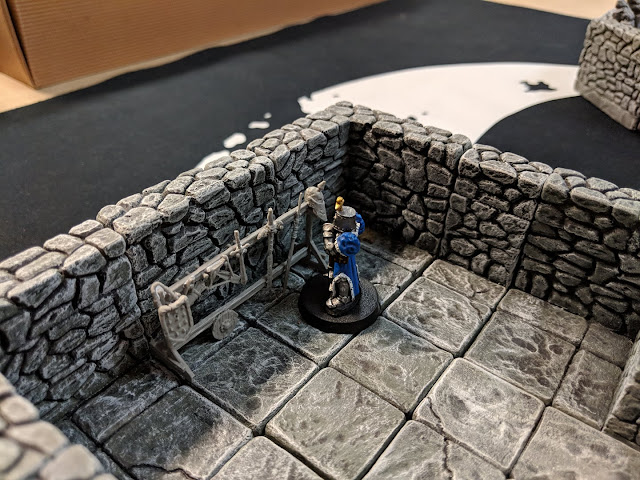 The next room has a lizardman guarding a chest! Huzzah, loot! The lizardman gets brained with an axe pretty quickly. The dwarf moves in to open the chest... 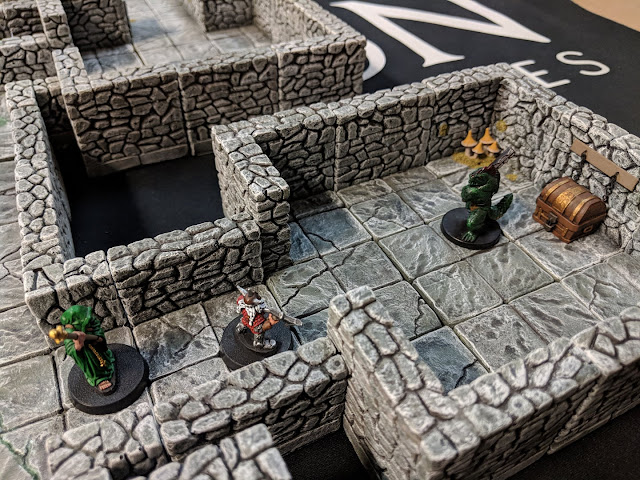 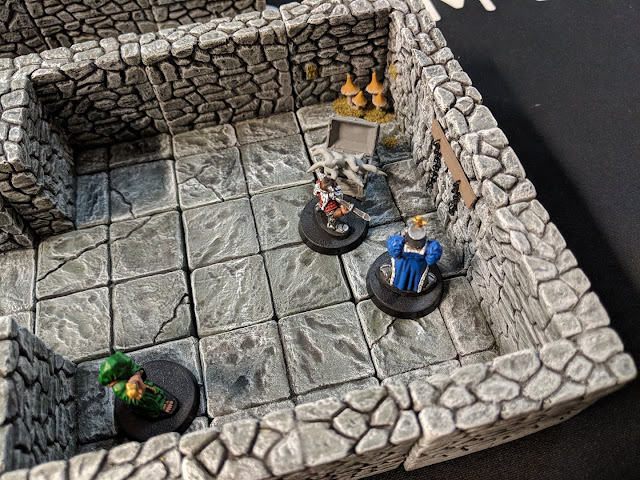 Room number 4 contains nothing but an ordinary table. Or is it? The curious cleric decides to search it and...gets cursed again, this time getting turned into a frog. Sadly a frog miniature was not available for this picture. 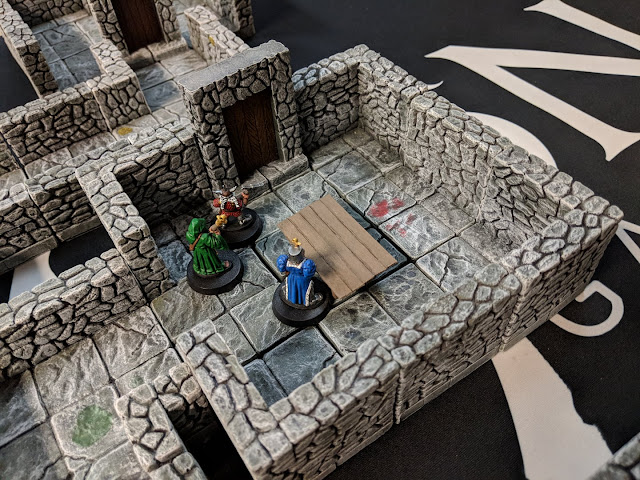 The curse didn't last long, but it was long enough to distract the heroes while some random bandits ambushed them! Two were cut down quickly but a third almost made it to the wizard before the dwarf caught up with him. Close call! 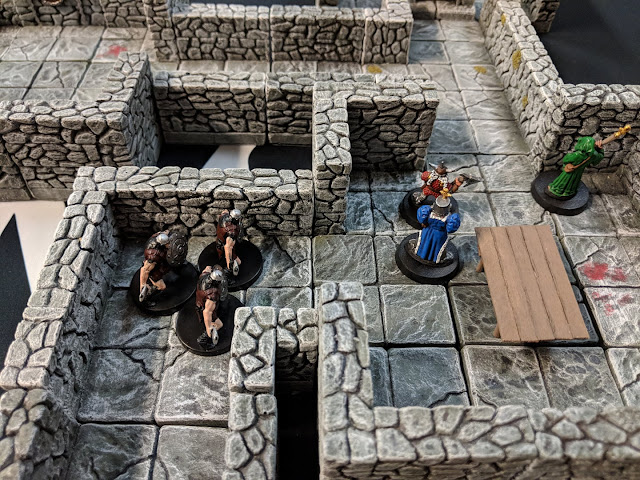 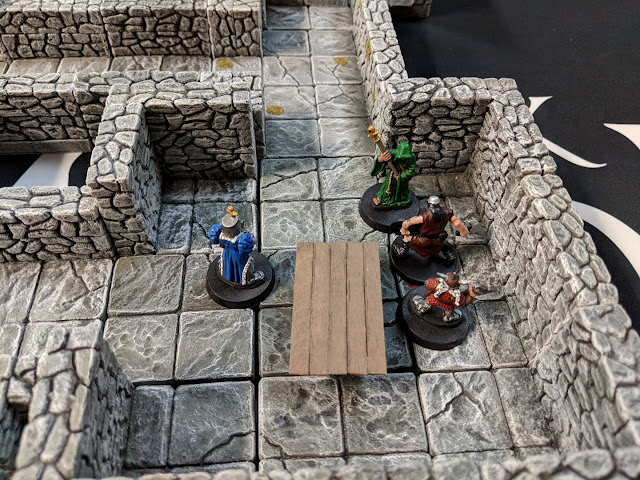 The party again attempted to move on, but another wandering band of goblins showed up. Two rushed the wizard while the archer hopped up on that damn table and fired a crossbow bolt into the poor cleric's back, killing him instantly. His god must have been really angry with him! The dwarf and wizard finished off the runts, but now there were only two... 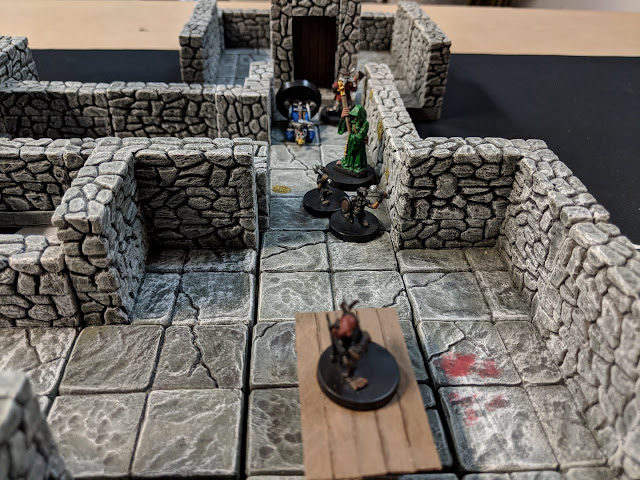 Trudging on to the fifth room, the dwarf opens the door and gets a spray of acid for his troubles. He is unharmed but soon finds himself charged by another lizardman! Blows and spells are traded but the mighty dwarf is finally felled by beefy scaled sinews. 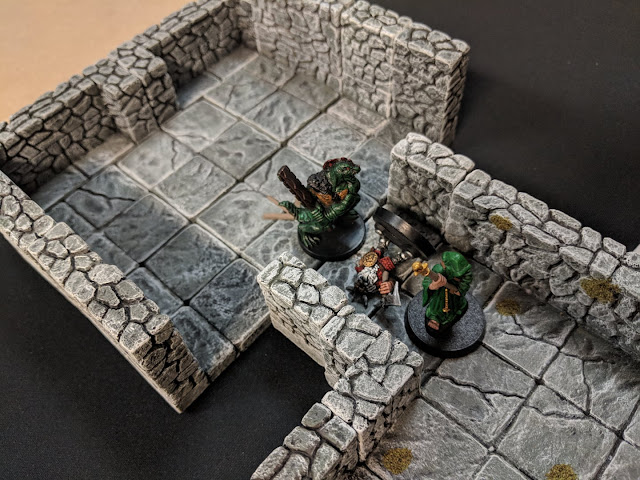 Finding himself suddenly alone, the wizard decides to leg it and the quest is at an end. Sadly, adventure failed. 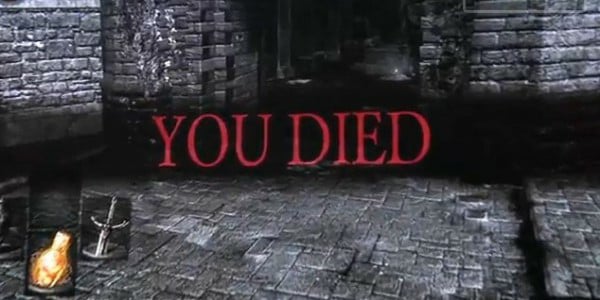 Even though my party died horribly and didn't even make it to the final challenge, I still had a great time. I've blown through adventures this size before easily, but this time luck was just not on my side. Lots of wandering monsters, unlucky combat rolls and an inordinate amount of traps just made this brutal.

But that's how life goes in the Deep Dark.