(Note: All references to SLAMBO! in this post will be in all caps and punctuated with an exclamation point. This is because his name must always be shouted at the top of your lungs while making an angry war-face. You should imagine that every time you read SLAMBO!)

In the ancient times at the beginning of Warhammer, Citadel put out a number of metal chaos warrior figures that for some reason or another they decided to name: 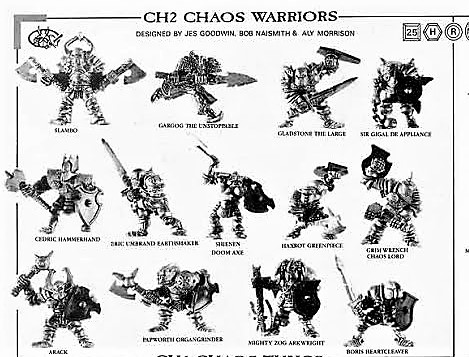 They were filled with character and in may ways set the tone for all chaos warriors to come after. They embodied the art of heavily armored murder, and none more so than SLAMBO!

You can see SLAMBO! in all his glory there in the upper left corner. The horns, the axes, the slitted great helm and giant pauldrons, SLAMBO! probably created the chaos warrior look we know and love. He was a real trend-setter from the get go. In fact, it is probably safe to say he was the inspiration for the equally-famous-if-not-more-so chaos warriors from HeroQuest:

Over the years, SLAMBO!'s simple approach to horned, armored, double-bladed mayhem has made him somewhat of a legend among the Warhammer community at large. Which meant of course that when Games Workshop released a new, bigger, meaner resin version of him, the internet was buzzing with excitement.

As a fan of old-school miniatures in general and a lover of all things even tangentially HeroQuest related, I had to pick up SLAMBO! and paint him up. I am incredibly proud of the results: 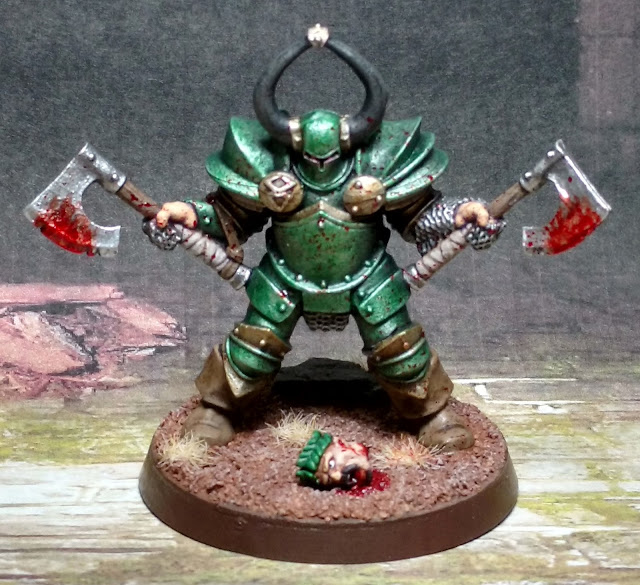 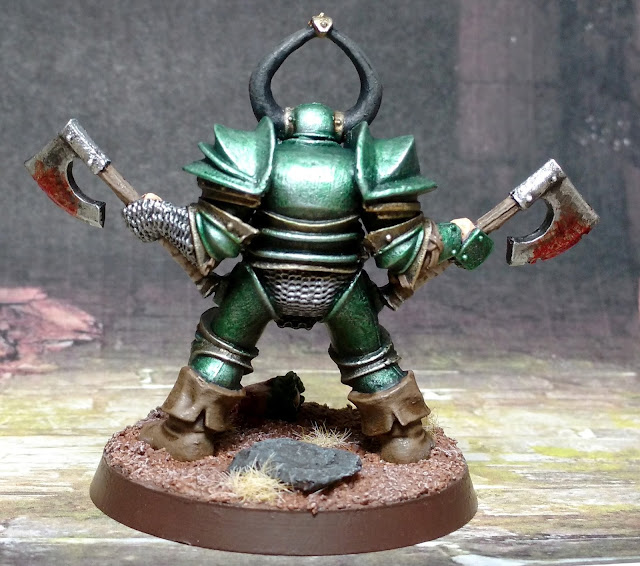 The main technique used on the armor was to prime black and drybrush the model in layers of silver. In this case, Boltgun Metal>Ironbreaker>Mithril Silver. Then I washed the armor with Thraka Green and Gryphonne Sepia in the appropriate areas, giving it color but leaving it metallic.

As you can see, I picked up a pot of GW's Blood For The Blood God and just went to town. This stuff is amazing and it is crazy how much it looks like real blood. I used a toothbrush dipped in BFTBG and ran my finger over the bristles, flicking the paint on to create spatter in the appropriate areas. 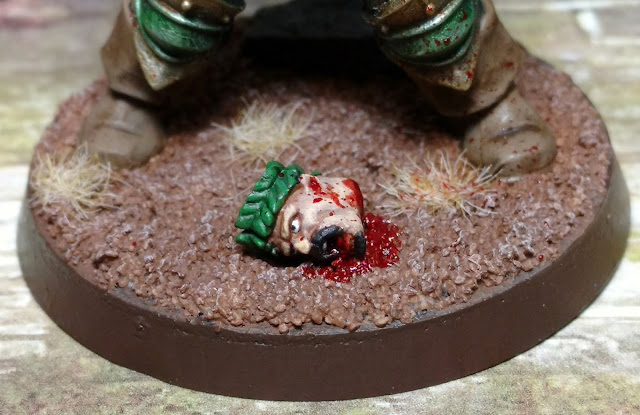 I really love how the severed head came out. It is an old Empire head, I think from some knights. I cut the neck area flat and painted in some flesh and bone then just gooped BFTBG all over it. It was only appropriate to show SLAMBO! in his natural element of blood-soaked glory.

He's surprisingly bigger than his original version. While SLAMBO! the elder was 28mm scale and we would expect his new version to be 32mm heroic or some-such, new SLAMBO! is well into the 40mm scale territory, almost completely filling his 40mm base. He makes for an imposing figure on the tabletop.

Speaking of which, while he has rules for both Age of Simar and the new version of Warhammer Quest, I think SLAMBO! will be a display model for some time. If you want to see him in person, you can pop down to Black Moon Games, where he will be menacing people from the display case.

That's all for now! Happy gaming!
Posted by TheUndergroundLair at 1:19 AM