Just last month Warmachine and Hordes released their new MKIII edition rulesets. Even though I re-entered the game only 2 years ago, I was super excited for this for a number of reasons:


While this has turned out to be sort of a mixed bag since the release, that last point was what had me most excited. You can tell by the exclamation point.

Banes have been my favorite models in Cryx since MKI and having a badass bane chick to lead my ghosty dead axe guys makes me happy to no end. The battlegroup is a great deal for the price so I had to pick it up just for this new caster, plus the mini rulebook. Getting an extra body to build Malice out of was gravy.

Without further images of food, allow me to introduce Bane Witch Agathia: 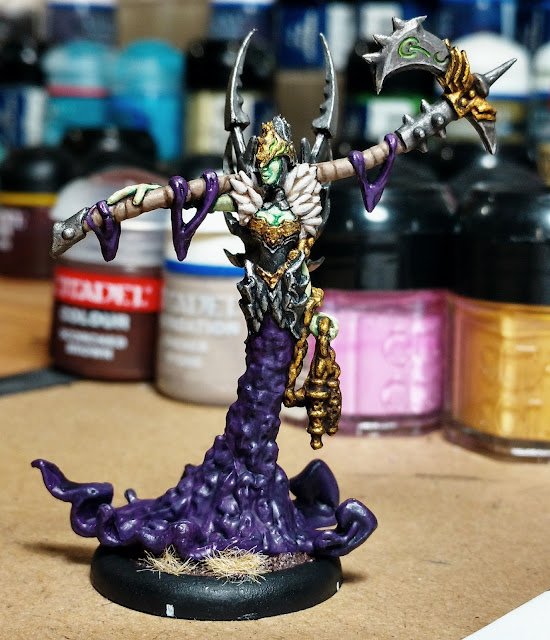 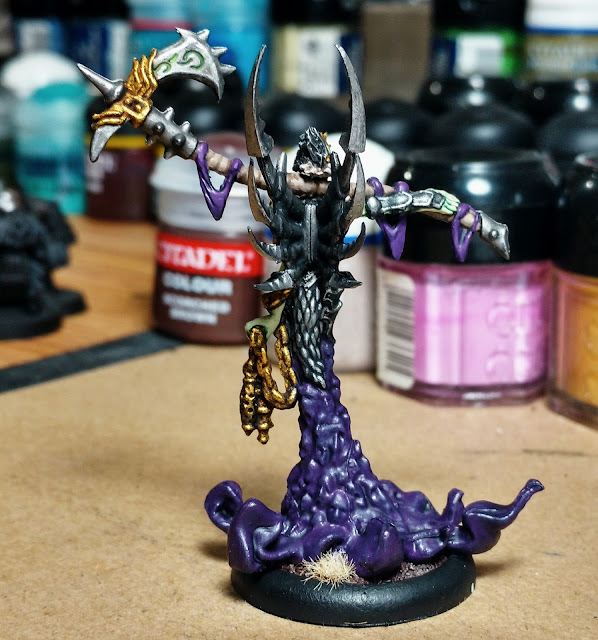 I will say the plastic in the battlegroup boxes is not any better quality than Privateer's normal offerings. I found her details a little soft and there were multiple mold lines in bad places. Being bad at removing mold lines and not wanting to ruin her, I erred on the side of caution and left them intact.

Since my banes are ghostly green, I decided she should be green too, if in a paler fashion. It leaves her looking like an otherworldly creature which fits her perfectly. I also carried the purple and gold of my other miniatures over to her as well. I'm not entirely happy with the skirt. The picture kills the highlights and even in person they don't exactly pop. I may revisit it at some point.

And of course we have a family shot with her super happy fun bane-time friends and 2/3 of her battlegroup culled from previously painted models. The reaper is still a work in progress and should join her soon.

I look forward to getting some play time with Agathia. I'm used to using the amazingly powerful debuffs of Denghra and Agathea is more of a toolbox/assassination-y caster. The reaper is new to me too so I definitely want to get that in too before upgrading to the superior Malice.

Anyway, that's all for now. Happy gaming!
Posted by TheUndergroundLair at 4:12 PM