Recently I was wading through the morass of gaming awesomeness that is BoardGameGeek when I came across a thread by a new game designer/publisher asking for a review of their game. They would even send a review copy for free for anyone willing to play it and write about it.

Having written a few review-type-things before, I decided to give it a go and try out a proper, official review. A few PMs later and a copy was winging it's way to my door.

That game is Cops & Robbers, designed by Kieran Billings. It is a simple, fun game about stealing loot and running from the fuzz. The game consists of three different decks of cards, aptly named Cops, Robbers and Loot:

Robber cards consist of sneaky tricks, bonuses to help you escape the cops and penalty cards to screw with the other players when they make their getaway. 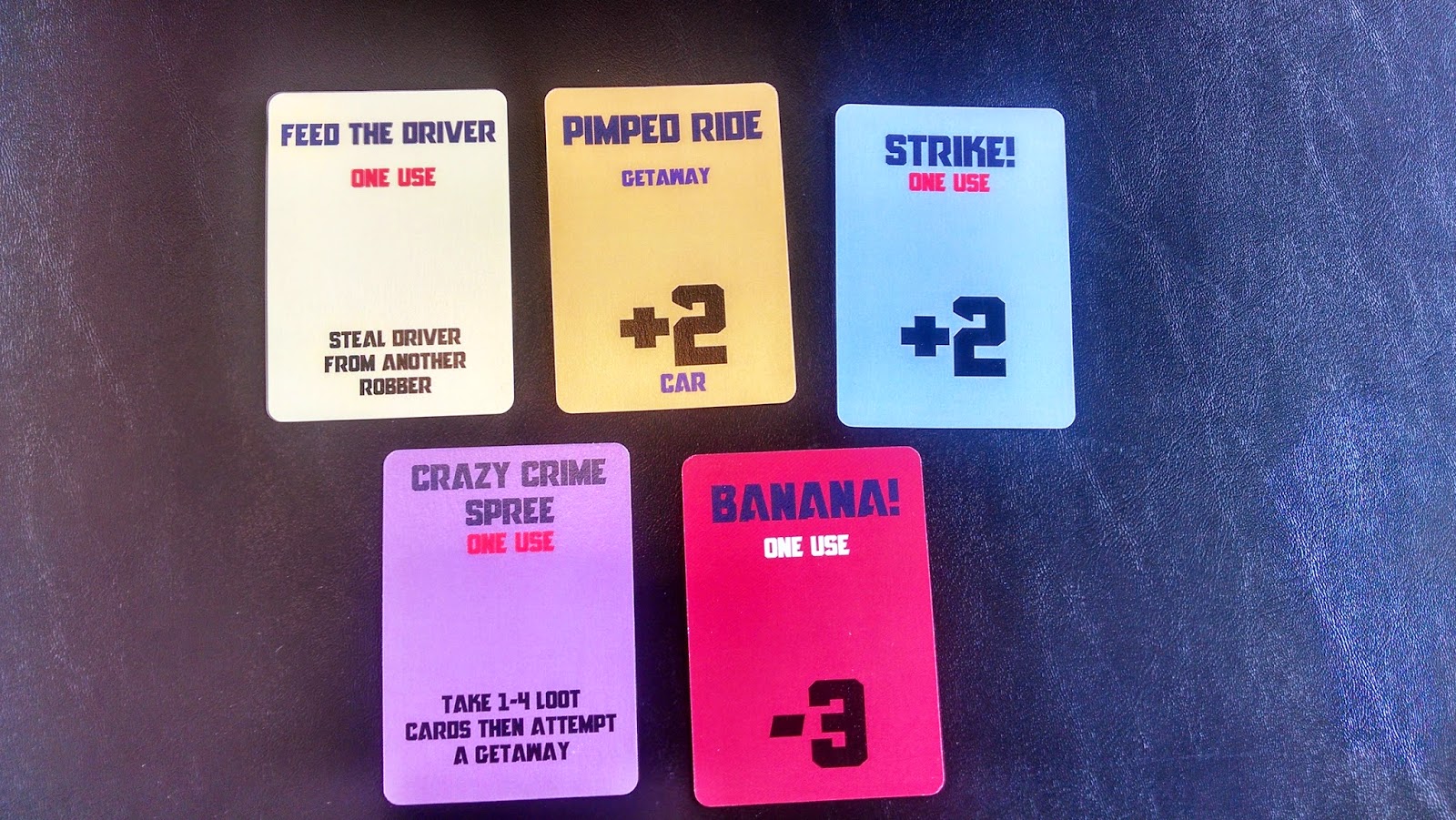 Some of the most important types of Robber cards are Getaway cards which represent your getaway car and all the cool modifications you've made to it to better cheese it when the cops appear.

The object of the game, of course, is to get loot. The Loot deck contains all sorts of shiny things to steal, although occasionally you end up with nothing. Too bad it still counts against you if you come up empty handed! 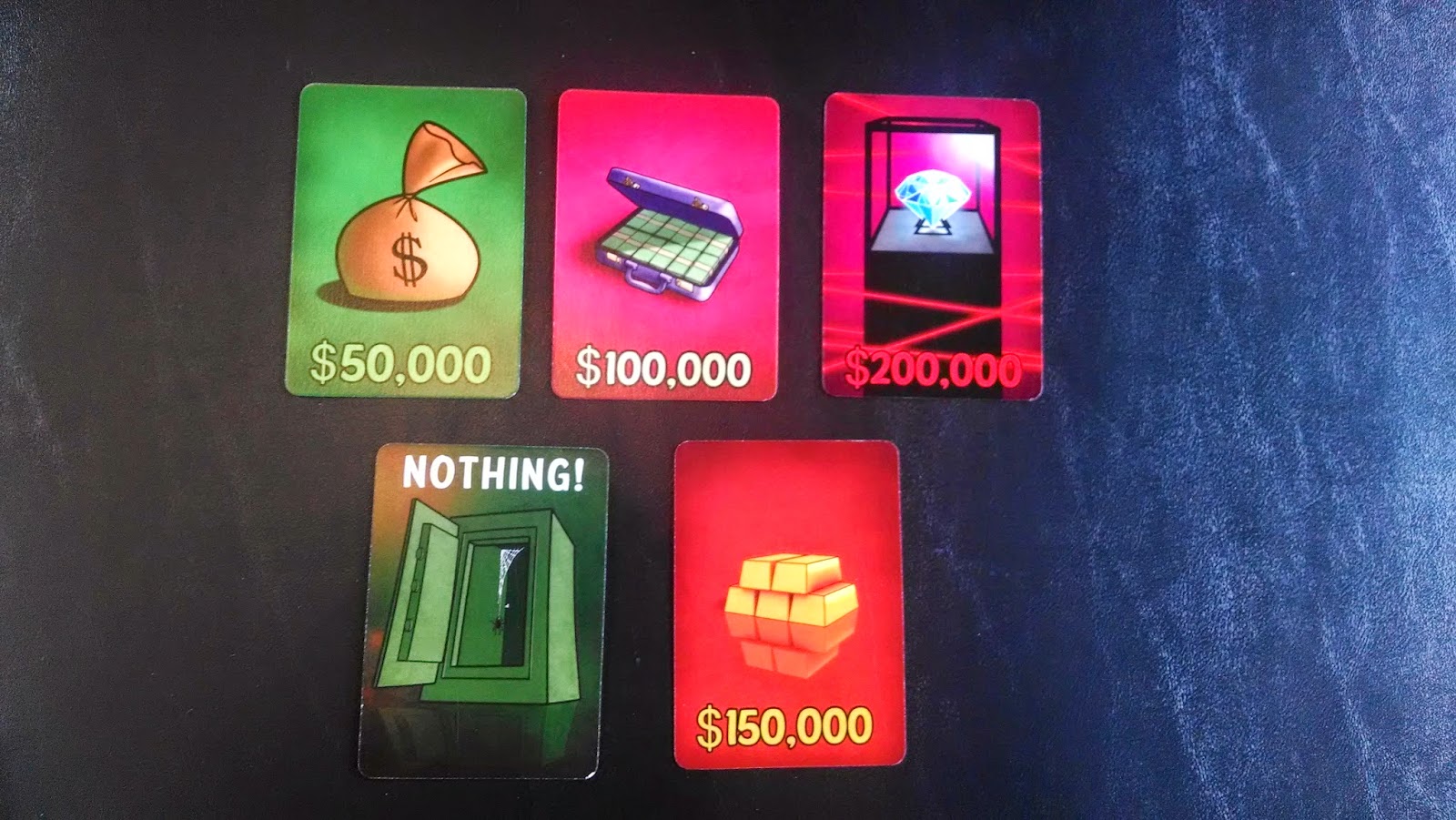 Finally you have the Cop cards, which you must evade to keep your loot. Sometimes your illegal activities draw no attention at all, but each Loot card means more cops, and sometimes you can end up caught no matter how crafty you are. 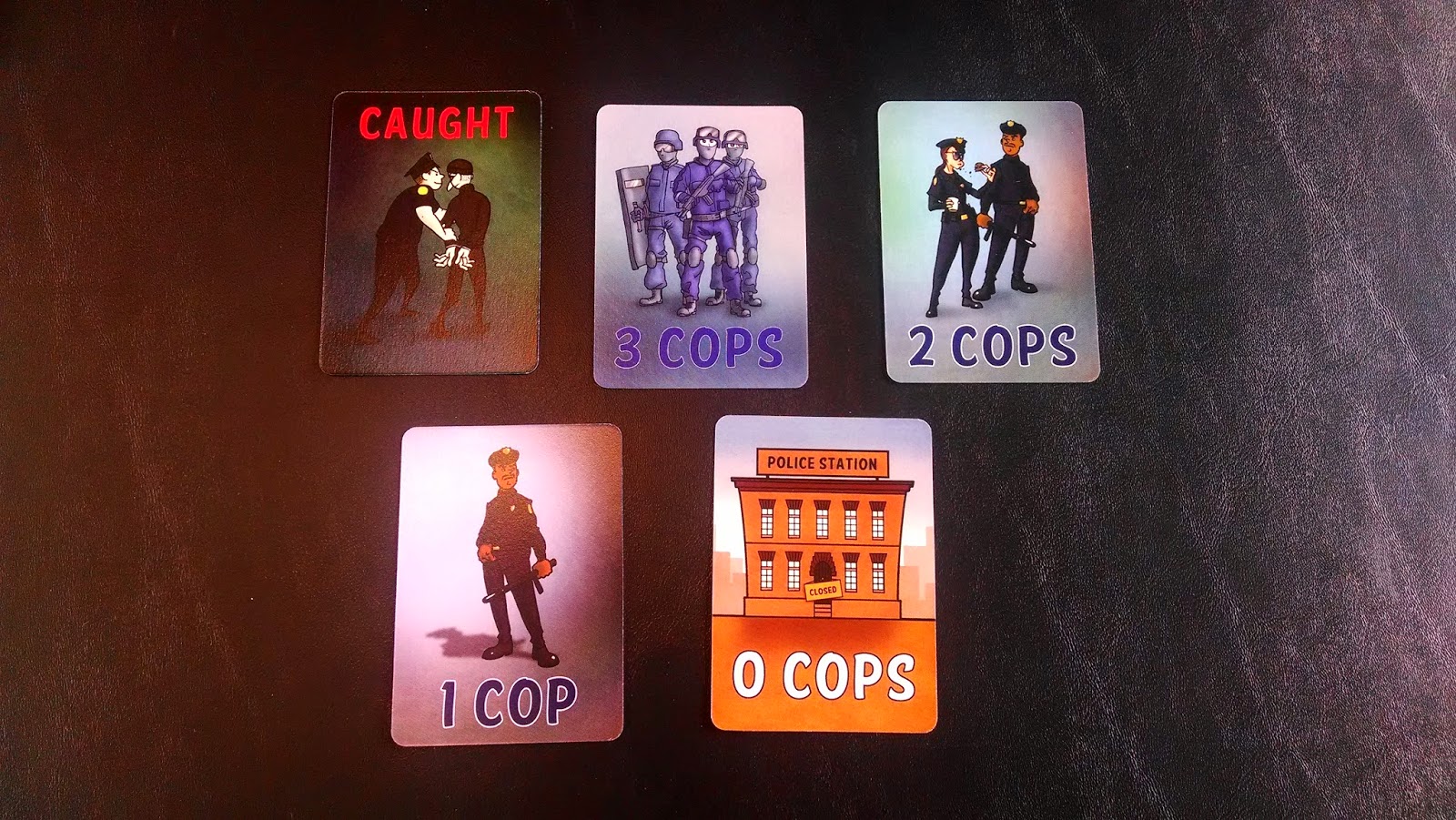 Games are either played until one player reaches a certain amount of Loot, or for a fixed time period, at the end of which the player with the most Loot wins. All players start with five Robber cards and must draw/discard back to five at the start of each turn.

During a turn a player may lay low and draw two more Robber cards for more heist options, or steal stuff, netting one Robber card and one Loot card to add to the pile of stuff to stash later. During either of these actions, a player may play other cards, including adding to their getaway car.

Alternatively, a player may try to stash the Loot they have stolen so far, triggering a getaway sequence. During a getaway, the player running draws one Cop card for each Loot card stolen and must have bonuses equal to the number of cops or more to escape. This might be simple, except that other players may play penalty cards to worsen your chances. Unless you have some bonus cards or some sneaky tricks, you'll find yourself behind bars quick.

If you escape, your Loot cards go to your stash and are off limits for the rest of the game. Loot doesn't count for your victory total until it's stashed, so it pays to get it done quick. However, if you are caught, you lose the Loot you haven't stashed yet, your sweet ride (i.e. getaway cards) and you lose a turn while you sweat it out in jail.

I have to say, I did have a lot of fun playing Cops & Robbers. I was a little worried about writing this review because the game is definitely not like my usual fare. However, it was a nice diversion, and I do like the design of the game. There are both "gotcha!" and press-your-luck elements, meaning you are just as likely to be screwed by your opponent as by your own decisions. The rules are simple and straight forward, and the game would be very good for playing with family, other non-hardcore gamers or as a light filler during game nights.

Being a preliminary copy, it has a couple of rough edges I would like to see worked up before its final release. The rules are simple, but the rulebook could be a little clearer in places. The Robber cards lack art right now, but Kieran promises that they will have more of the same great art (which is nearly finished).

In closing, I recommend giving Cops & Robbers a chance. Not only will you be getting a fun game, but you will be helping out a new game designer, which I think we can all agree is great for the hobby as a whole. The game isn't commercially available yet, but the Kickstarter campaign opens up April 20th and will continue until May 18th. Toss a few bucks at it and get a fun game! And in the meantime, check out the Devious Games blog for rules and updates!
Posted by TheUndergroundLair at 9:13 PM