I'm a pretty big fan of Adventure Time. I love the way it spoofs geek culture and find it pretty goddamn hilarious. One of my favorite spoofs is from the fourth season, when Jake and Finn play a game of Card Wars.

Don't know what I'm talking about? Well here's a taste:


As you can see, its pretty much one big send-up of Magic: The Gathering and CCGs in general. Being a gamer, I couldn't help but want to actually play that game, pig and all. So imagine my unbridled glee when I found out Cryptozoic Entertainment was actually making a real life version of Card Wars!

That's right, they didn't just make an Adventure Time card game. They actually made the game the characters play on the show. Obviously the hologram technology in the episode is a long way off, but for bits of cardboard and paper, they did a mighty fine job.

Cryptozoic has produced two double deck sets: Jake & Finn's decks (from the episode); and BMO & Lady Rainicorn's decks. Two themed decks together in a starter is a great deal for 20 bucks. So far, I have only acquired the Jake & Finn set. 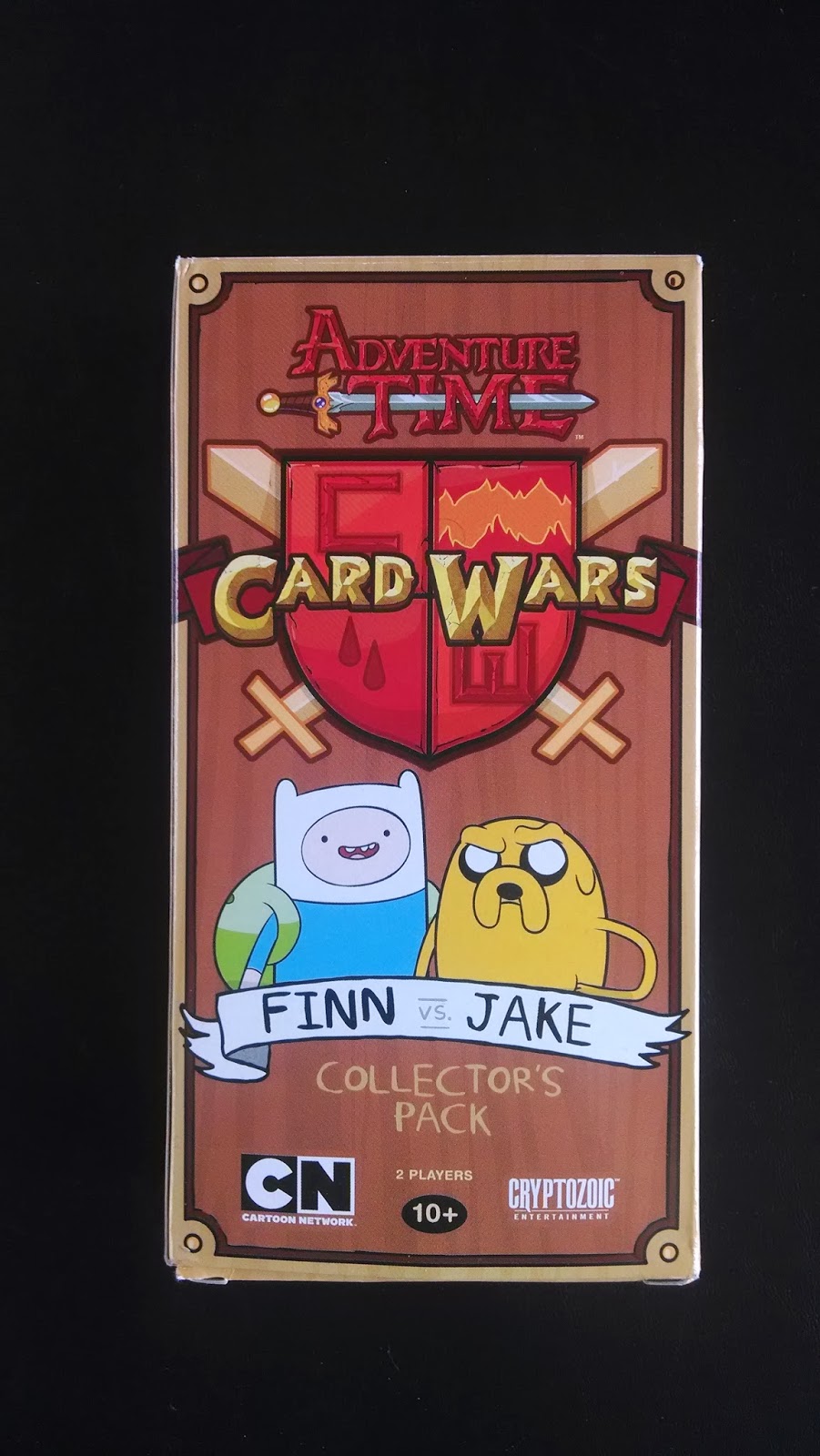 It comes with Jake's 40 card Cornfield deck, Finn's 40 card Blue Plains deck, 8 oversized landscape cards (4 for each deck) and a bunch of tokens for damage. 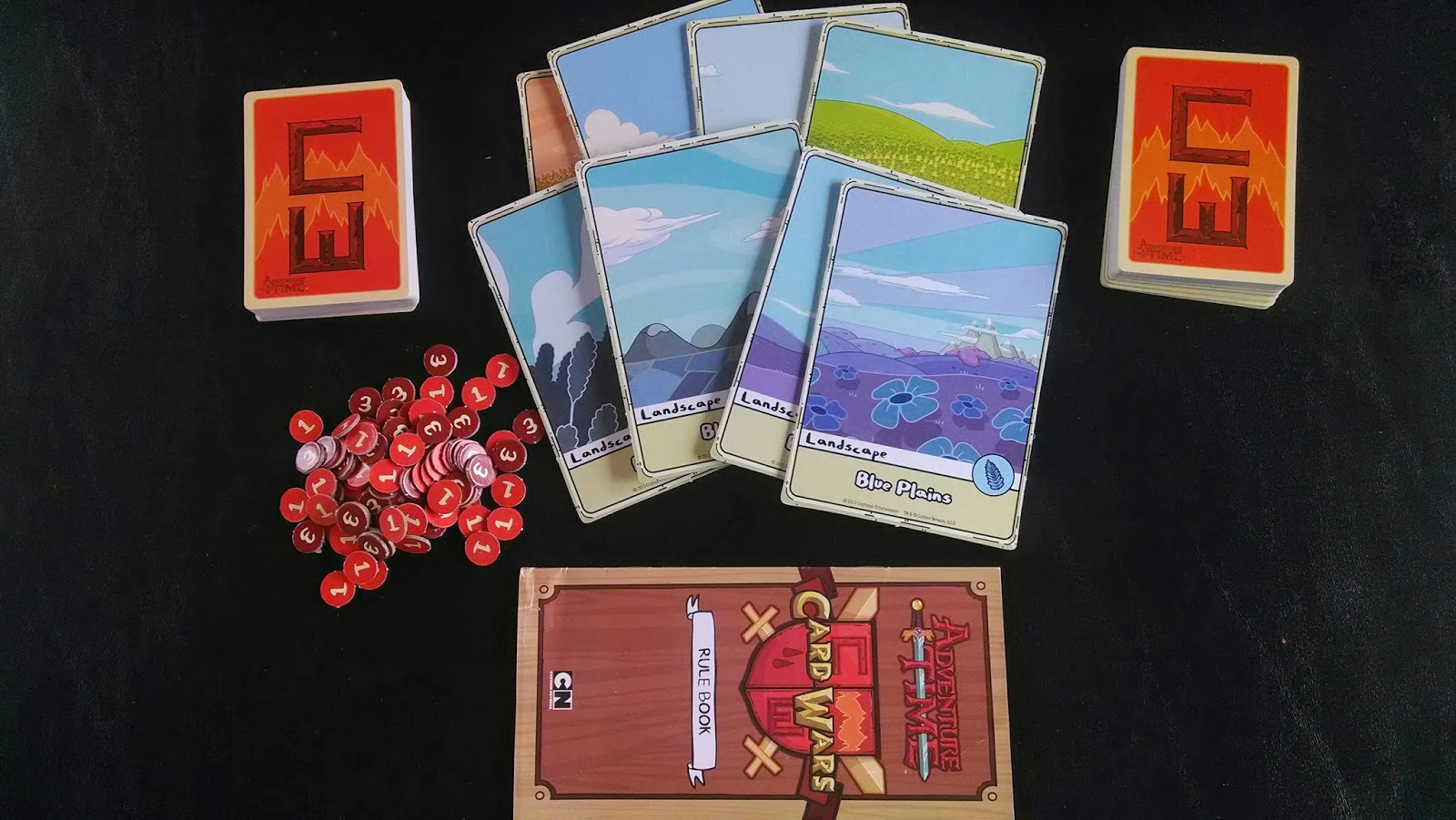 The landscape cards come in sheets paired with 10 tokens or so, which have 1 and 3 marked on either side of them. I will say that the tokens are hard to punch out without ripping, and I find them a bit fiddly. I suggest finding two D10 dice for each player and a handful of small D6s to record creature damage. But, if you don't have that at hand, the counters work just fine.

The object of the game is to use your creatures and spells to reduce your opponent from 25 life to zero, thus becoming the Cool Guy and obtaining all the gloating rights that entitles. Plus, the Cool Guy gets to go first in the next game played, so there's that too. If no one is obviously the coolest, the first player is chosen randomly.

Each player places their landscape cards touching each other in a row, then matches them up to form lanes. Creatures and buildings are played to these lanes in order to fight, and an undefended lane can be used to damage your opponent. Each player shuffles and draws 5 cards. The starting player goes first and cannot floop or fight on the first turn. A card is drawn at the start of each turn and then a player has 2 actions to play cards with. There are 3 types of cards: spells, creatures and buildings. 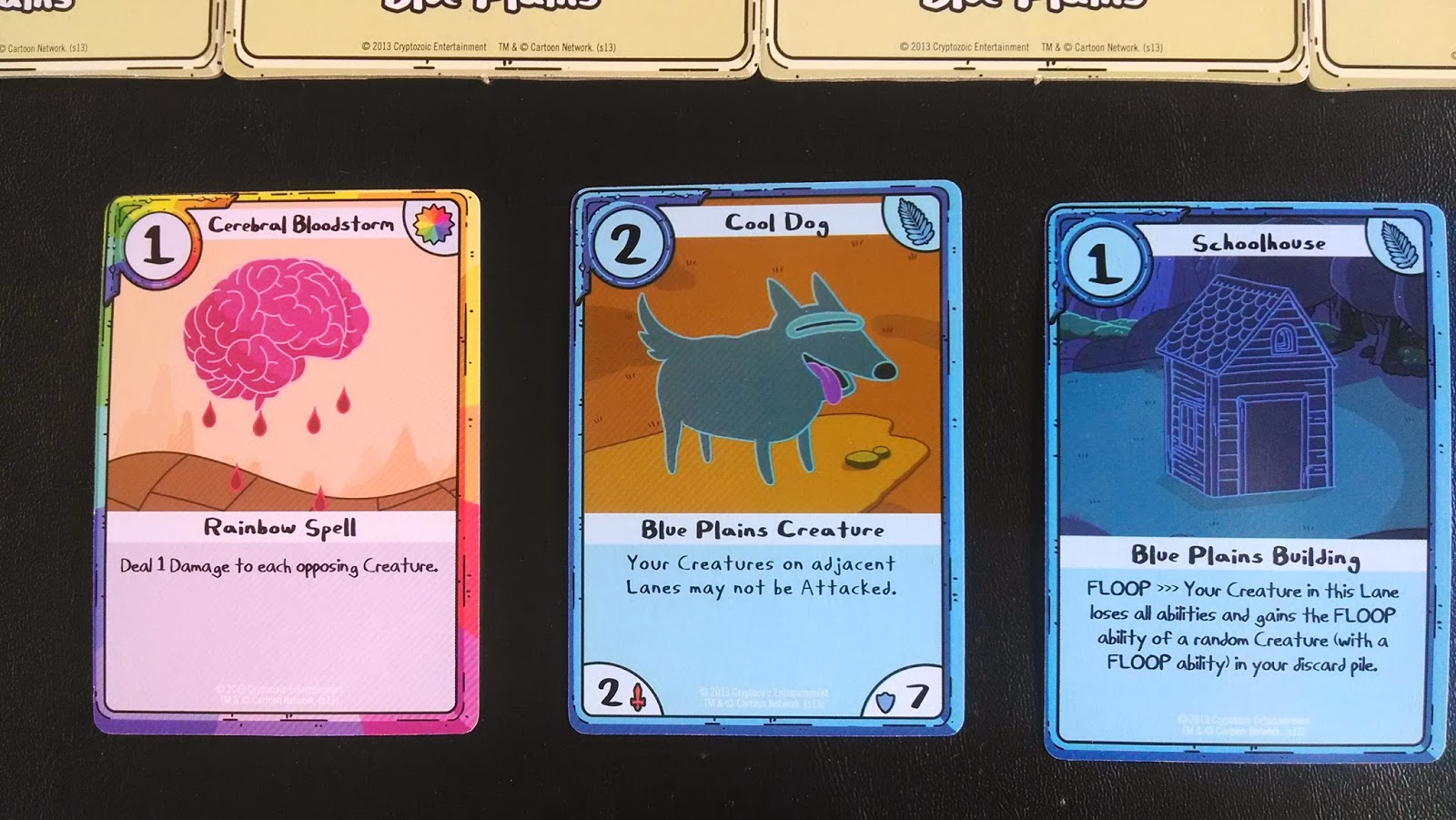 Each card costs 0, 1 or 2 actions, and requires that many of a certain type of landscape to play. Spells are played for their effect and are discarded. Creatures are played directly into lanes and stay in play until they are killed or a player chooses to replace them with another creature from their hand. Buildings are played below a lane and affect that lane with it's abilities, remaining in play until an effect removes them or they are replaced like a creature. Cards can only be played on your own turn. 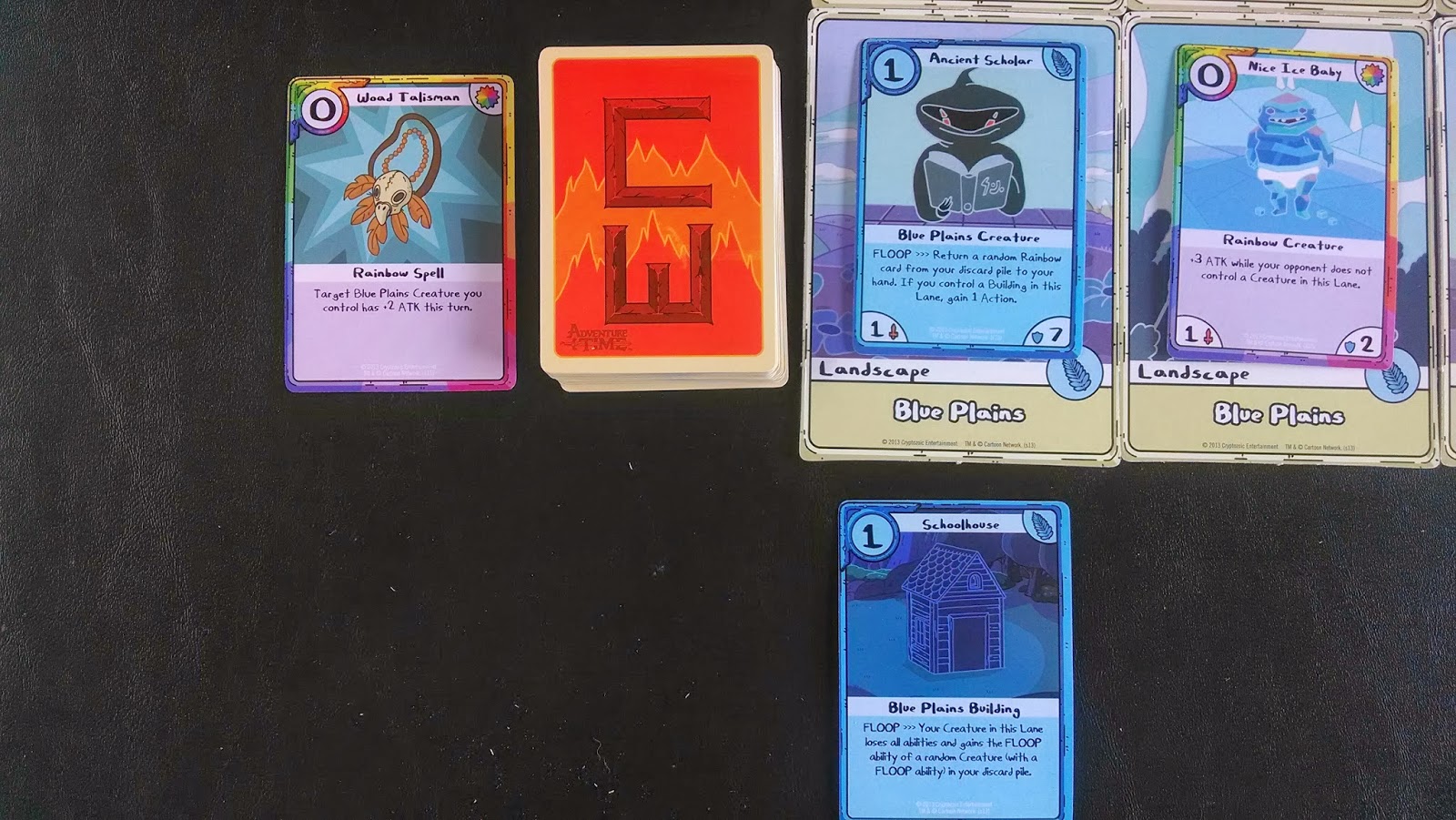 Some cards have the ability to floop to use abilities. This is basically tapping, like in Magic, so the card is turned sideways and stuff happens. Flooping doesn't cost actions and can be done anytime before or after an action is used. Cards may not floop during combat, so floop wisely beforehand. 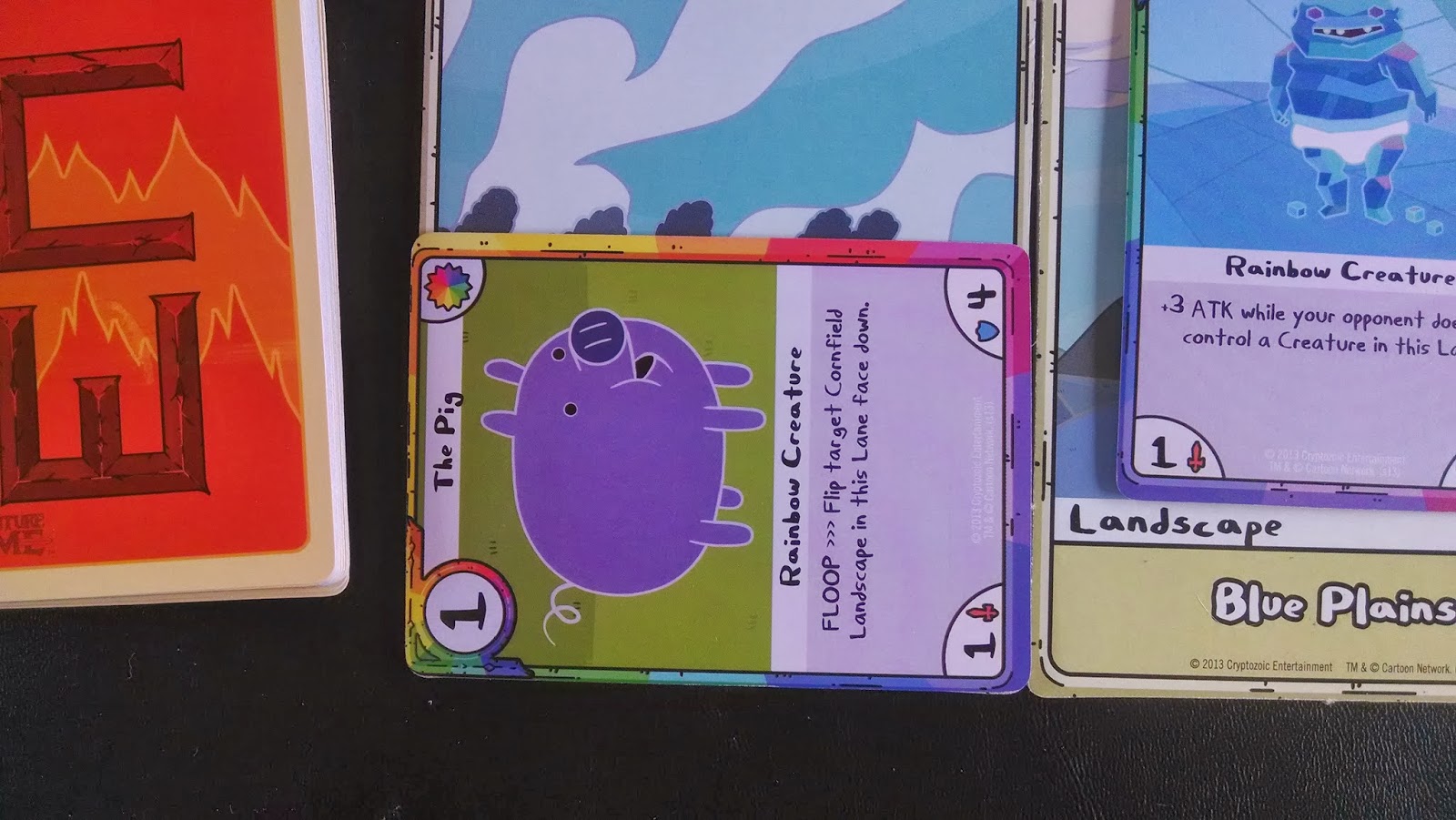 Combat is pretty straight forward. Each non-flooped creature attacks one by one in the order you choose. If there is a creature in the attacker's lane, they both do damage to each other. If enough damage is dealt, a creature dies. Attacking an empty lane means you hit your opponent directly. A creature only attacks in its own lane, but cards can be used to move them around before battle to give you a "strateegic advantaage." 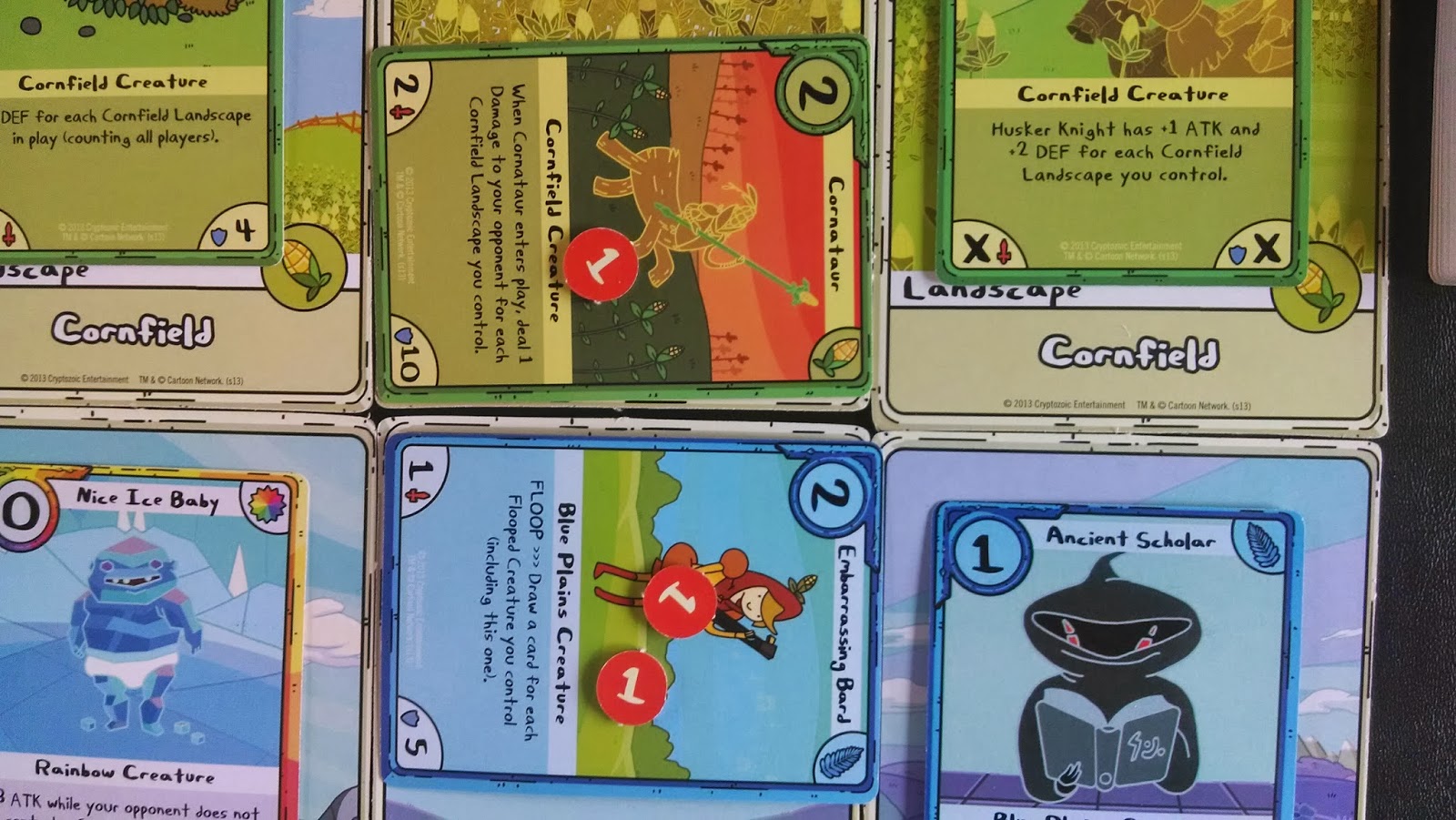 Overall, I find the game extremely fun. The rules are simple and straightforward, I love the art and the concept of making a game from a show rather than out of a show is a pretty neat concept to me. I like that I'm taking the role of Finn or Jake rather than waiting for my Finn or Jake card to pop out of my deck. I also like that combat has a spatial element to it, which is a lot easier to grasp than, say, Magic's combat clusterfuck. It also makes your choices of placement very meaningful and adds a good layer of strategy to an otherwise pretty basic game.

I also really like the landscape setup because it keeps the play area minimal. All the action takes place either on the landscape or directly below them. It's hard to find a CCG style game that can be played on a restaurant table or TV tray that doesn't turn into a sprawling mess. The games are also fairly short too, with most lasting less than 20 minutes.

You can also build your own decks. While the release format is 2 complete decks per box, you can mix and match the cards to build unique decks. As long as you don't include more than 3 of any card and have enough of each landscape needed, you can go to town. As the decks include only 1 of certain cards, getting a full playset of every card is a little price ($120) it's still far less than most Magic sets. Still, I'm perfectly happy with the decks as is and find learning to play each one part of the challenge, so I don't think I'll be deck building any time soon.

There are 2 things I don't really like about the game. The first is that the decks included in the Jake & Finn set have a complexity disparity. I'm starting to get the hang of Finn's deck, but it is obviously harder to play than Jake's. Finn's deck plays very much like a blue deck in Magic, with lots of tricks and creatures that are a little sub-par on their own but can be paired with some sneaky effects to get the most out of them. Jake's deck on the other hand, plays much like a red deck, with some direct damage and a bunch of really great attackers, so the learning curve is a lot lower. So, for new players, hand them the cornfields until they have a good grasp on the mechanics.

The second is that there is a major wasted opportunity in the set. You see, one of the pigs has a secret message to be decoded on it, and they included a little sheet of red plastic to decode it with. 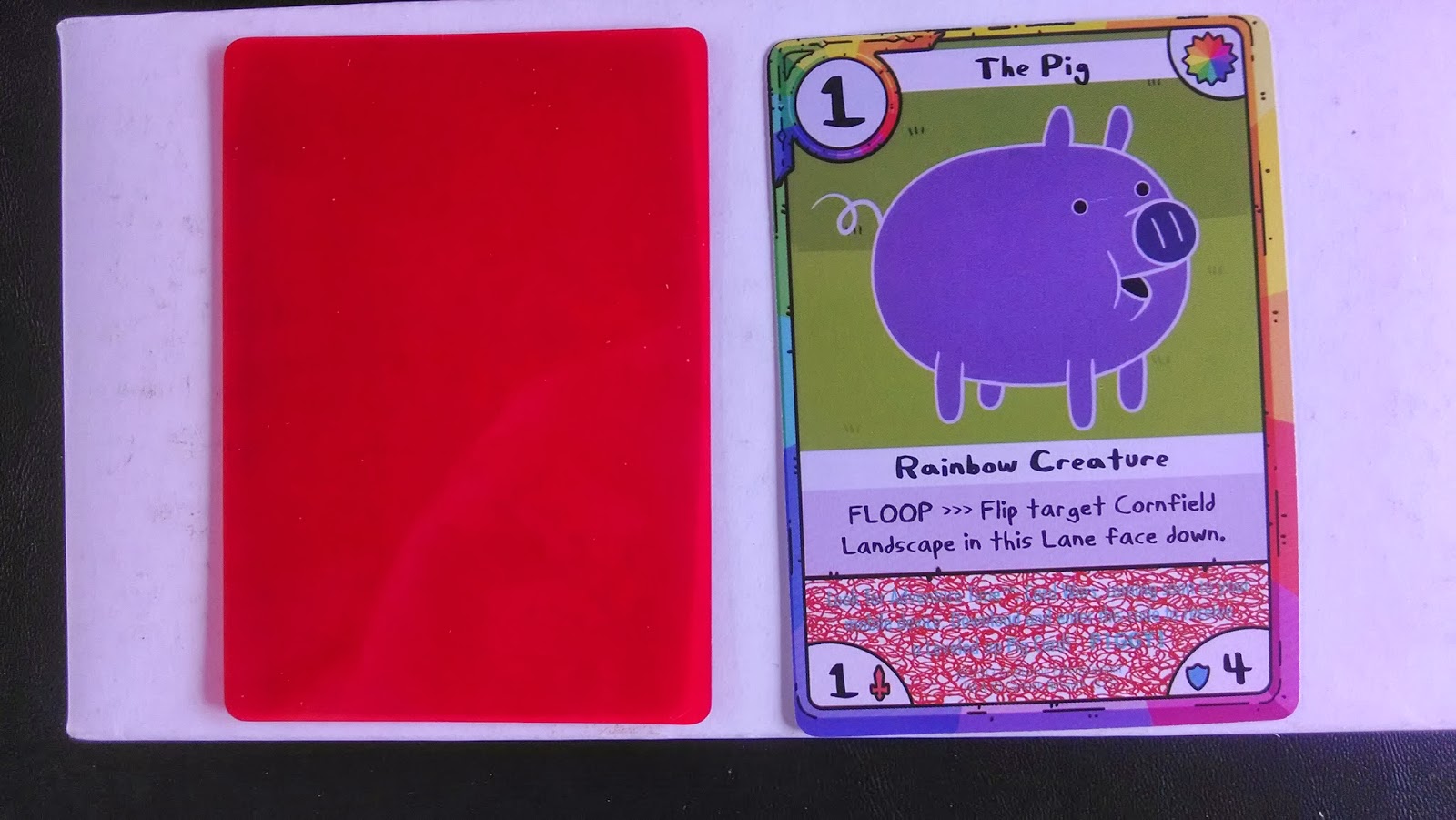 This is really exciting at first, because you think you'll find some great secret, a tip or maybe a fun joke. Well I'm going to spoil this right now:

It's an advertisement. For the iOS game. That's it.

Crypytozoic took a fun idea and ruined it with marketing. Instead of having something that might drive sales of future sets by adding something fun for collectors, they chose the most boring route possible and made us all feel like a dumbass for staring through that little red piece of plastic. So yeah, toss that little red plastic card away. I assume the same is true for the BMO/Rainicorn set, but if it isn't I'll let you know.

All that aside, I can't wait to get the second set and start exploring the play styles in there. I'm intrigued by the name "Useless Swamps" for BMO's deck and (as a black deck player in magic) really want to see what kinds of funny cards show up in it.

I really recommend picking up at least one set of this game. It's light, fun, great for younger players and is a good way to get that Magic "fix" without busting out the 1000 card collection to cobble together a decent deck. Plus you get to be the Cool Guy once in a while.


Posted by TheUndergroundLair at 11:15 AM