Every Doctor Has His Day

Doctor Who celebrates its 50th anniversary tomorrow, with a special called The Day of the Doctor. Being a recent but devoted Doctor Who fan (I won't say Whovian, because I'm not quite there yet), I have taken the day off from work to settle in with my lovely wife, who I have been also slowly converting. She started with Torchwood and is more of a Capt. Jack fan, but the Doctor is beginning to grow on her.

I have been wanting to paint up one of Heresy Miniatures line of Not-Doctor-Who figures for a while, and I figured there would be no better time than now. I love David Tennant's 10th Doctor, so I went with Dr. Hugh II. 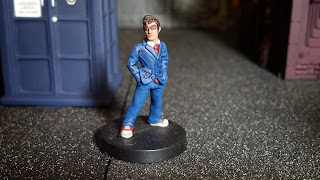 I almost went with the first version for the long coat, but I haven't seen a picture of it yet that I've liked the face in, and I don't trust my meager skills to make mine the exception. Hugh II still cuts a dashing figure. I avoided the difficult pinstripes and chose one of his blue suits. I haven't based him, since it's more of a display model and if I use him the black base will sort of slide into any genre easily.

Of course you can't have a Doctor without a TARDIS: 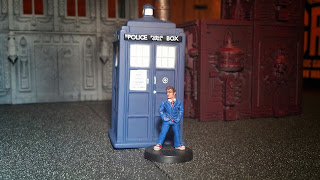 It's nothing special, just a TARDIS monitor mate popped off it's spring. It was cheap, pre-painted and fit the bill nicely. The Doctor is more true 25mm, so it's a little big but it fits well among my minis collection.

The greatest thing about Doctor Who is that anything can happen, so I expect he'll make some appearances in my games. He looks just as comfortable fighting eldritch horrors: 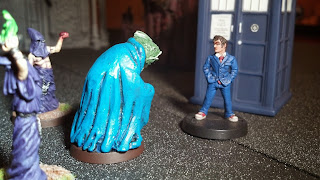 As he does staring down the servants of the God-Emperor of Mankind in the 41st Millennium: 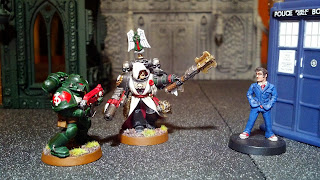 Or maybe fighting some ancient ghosts with a medieval knight at his side: 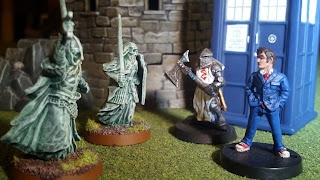 No matter where he goes, he'll no doubt save the day. I don't have any companions for him yet, but I haven't found any models I like for it yet. I'd love to have a Martha Jones, but nothing I've found seems to fit her.

If anyone else is looking for some good Doctor Who stand in's and wants to leap in head first, Heresy is offering a big bundle deal that really is a deal. They also have some aliens that fit the bill as baddies. And, right on top of things, Heresy also has their version of John Hurt's War Doctor, the secrets of which I can't wait to learn tomorrow!

And because I can, I'm going to leave you with this image: 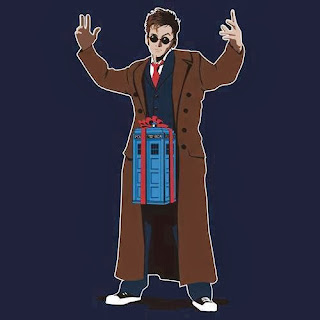 Boom.
Posted by TheUndergroundLair at 10:29 AM