Courage In The Face Of Demons

So with a little free time today, I decided to play a quick game of Song of Blades and Heroes, documenting it for posterity. It is a classic tale of good versus evil, where stout men fend off the forces of Hell itself.

On the good side, we have the brave warriors of Gondor (or a Gondor-like equivalent). Lead by the brave Not-Boromir, these warriors have a tough road ahead of them. 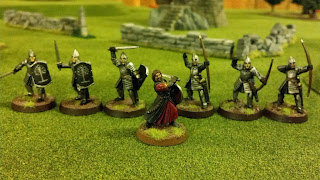 This is an extremely basic warband, straight out of the rulebook. It consists of a Human Leader, 3 Human Warriors and 3 Human Elite Archers. Simple but organized and effective.

The vile forces of evil are a strike force of Fiends straight out of the depths of Hell. What is their purpose in the lands of men? Only darker powers know... 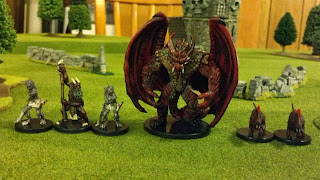 The Devils are a custom warband and consist of:

A paladin would have a field day with these gentlemen, but luckily there isn't one around to spoil their fun.

The scene for the battle is around the ruins of a skull-faced tower surrounded by trees in a dark forest. 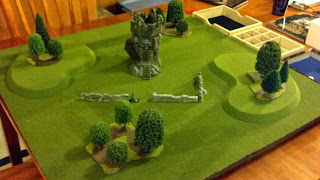 Taking opposite sides of the field, Not-Boromir sends his archers to take the high ground, while his warriors move to close off the gap in the crumbling walls. 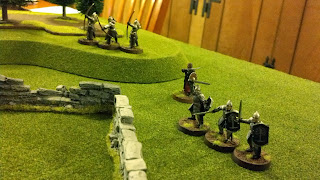 The Devils respond by moving around the tower, sheltering themselves from any stray arrows. 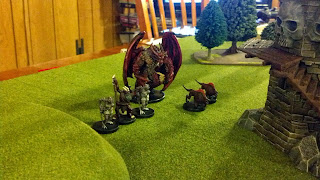 The hell hounds use their speed to break off and harass the archers... 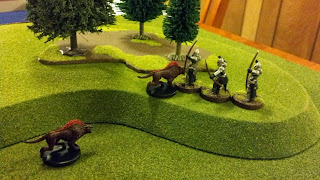 While the warriors seal off the gap as the Fiends close in. 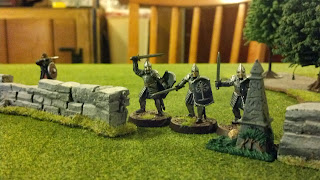 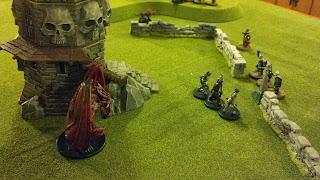 One of the hell hounds pays for its boldness with its life while the warriors surge through the gap to slay one of the bladelings and deal the bearded devil a stunning blow. 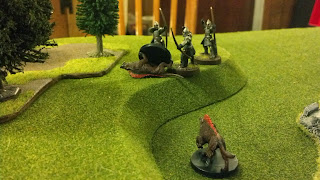 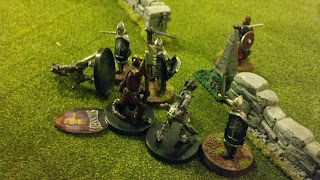 The remaining hell hound flees the archers and rushes join the fray near the tower as the major devil moves in to tilt the odds towards the forces of Hell. 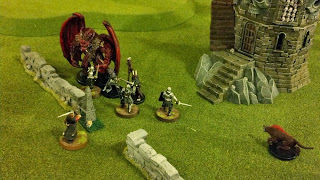 With a powerful blow, the major devil smashes the warrior into a thin, red paste inside his armor... 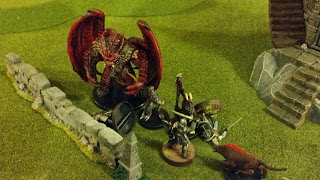 The sight of which proves too much for Not-Boromir and he flees. 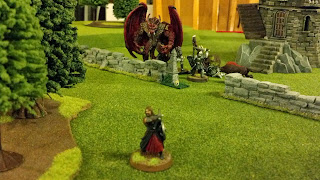 Flapping his mighty wings, the Devil commander easily catches up and engages the terrified leader. 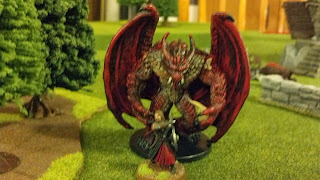 The archers move down to help the last warrior standing, one of the unleashing an arrow through the gap in the wall to fell the last hell hound. 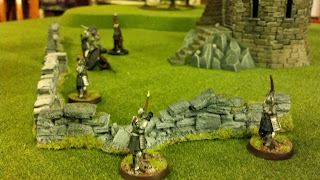 The victory is short lived, however, as the major devil smashes Not-Boromir into the dirt with an audible crack of bones and armor. The humans scatter, losing heart at the horrible sight. 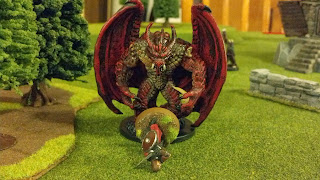 Rallying, the archers regroup, sending a hail of arrows at the major devil and driving him into the trees. 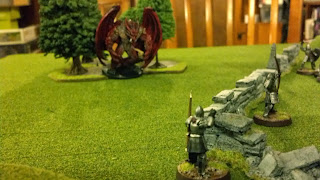 In a fit of rage, the fiend launches himself at the archers, hurling a fireball which barely misses one of them. 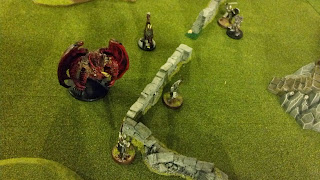 Blinded by his rage, the major devil ignores the archer to his left. This becomes a fatal mistake as the archer puts an arrow behind his ear, felling the beast in a crash of roars, blood and dust. The last bladeling flees and is cut down while the bearded devil makes for the trees, living to fight another day. 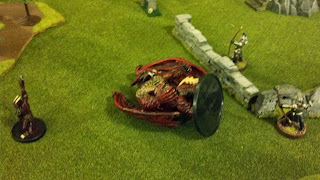 With the forces of evil vanquished, the human soldiers return home to honor their dead with ale and song. Huzzah!

So, there we have it. I must say I really enjoy playing the Gondorian warband. Human Elite Archers rock, even more so with good leadership. It is basic but it really, really works.

The Devils I have not had so much luck with. This is their second battle and they are currently 0 for 2. I will need more practice with them. I will need to work on not over-extending the Hell Hounds. Leader may not be the best choice for the Major Devil. His size makes him an easy target and also means he needs to get stuck in to work his best, which is a dangerous gamble for a leader.

And that's my battle report. Hope you enjoyed the show and happy gaming!
Posted by TheUndergroundLair at 4:07 PM