Originally I had planned to post a battle report this week. That changed yesterday morning as I sat down to my computer for my morning ritual: coffee, Facebook, check e-mail, and (since its release at GenCon) check  Target's website to see if any store remotely close to me has the Star Wars X-Wing miniatures game by Fantasy Flight Games.

As with most geeks, I am a fan of all things Star Wars. I may have opinions on how the prequels were made and vociferously boycott new editions on blu-ray (while secretly coveting them and hoping someone buys me a "misguided" present), but I consume it all. Movies, Legos, action figures, collectibles and, most importantly, games!

However, most Star Wars games have left me flat over the years. They have run the gamut of too kiddy (Epic Duels) to too complicated (WEG miniatures system) or have been too commercial. Even Wizards of the Coast's miniatures games didn't quite "feel" Star Wars. So when I saw X-Wing announced by a company whose games I love for their production value and decent rules, I was ecstatic. This, I told myself, would be my "new hope".

You should probably prepare yourself for a lot of bad Star Wars puns like that.

And there I was, staring at the words "in stock" on my screen. Now, it's not as if I hadn't already pre-ordered  one of everything X-Wing already from Coolstuffinc. But I had saved aside enough money to purchase one extra core set if I found it in a physical store before my loot arrived. I had been waiting about a year for this game and I wanted it NOW.

Fortunately, my wife was not there to here the squeal of girlish glee that echoed through the house, nor witness the ritualistic celebration dance of my people that followed.

The store was a little less than an hour away. The quest must be undertaken! Overcoming my intense hatred of the phone through the power of Star Wars, I called and had them set one aside, just in case some pack of rabid neckbeards managed to scour the place clean before I got there. I immediately hopped into my car, turned on a Star Wars soundtrack and rocketed down the interstate. I may have pretended my car was a starfighter as I drove. Possibly an A-Wing, the most car-like of the starfighters.

Two and a half hours later I had returned with my purchase, and already I could tell that the force was strong with this one (see, I told you. Didn't I tell you?). Now, on to the unboxing! 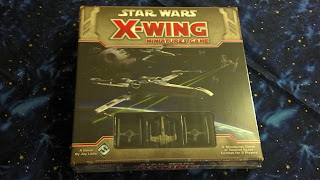 The box is typical FFG quality, sturdy and linen printed. It was slimmer than I expected, similar to their Silver Line boxes such as Elder Sign or Rune Age. It also has a cut-out window in the front, which allows the plastic pack of ships to show through. It also means that unless you leave that pack in the box, you have a hole in the cover. 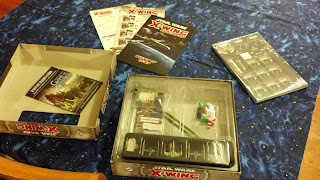 Here we have the pile of stuff that comes inside, all packaged up... 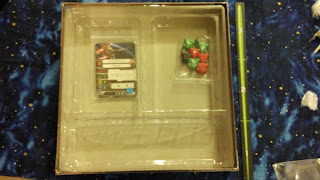 For once FFG has included an insert that will actually store the contents after opening. However, don't expect it to store any more than that. And you have to put the ships back in the way you found them or things will fall out of the hole in the box top. If you buy expansions, expect to have to find another option for storage unless you enjoy picking up a million counters off the floor. 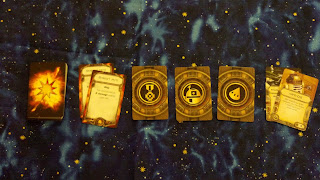 The damage cards and upgrade cards are the mini size, but judge them by their size you should not. They are covered with beautiful artwork and are high quality. The upgrade cards probably could have been full size, but the damage cards benefit from being small, since they are used somewhat like counters to mark damage on individual ships. 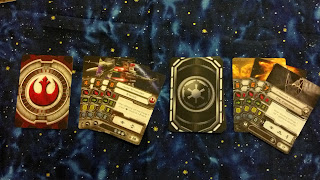 The ship card are American CCG size and are similarly beautiful. All of the artwork really "feels" Star Wars, and captures the ships without making them look like cartoons. There are multiple pilots for each ship, though each faction has unique pilots that can only be used one per squad. There are enough cards to outfit multiple ships beyond what is in the pack, but the ship tokens provided are printed with a different ship on each side, so it makes it difficult, if not impossible, to "cheat" and not buy extra expansions. 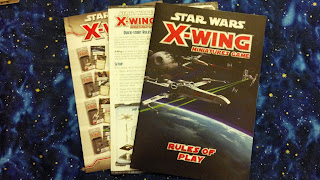 The rule book is surprisingly well laid out for an FFG book. The rules are laid out clearly and concisely, with lots of sidebars and examples. They include quick start rules, but the game is honestly so easy to pick up they are hardly needed. The book describes the basic game using the box components, squad building rules for when you have added a few more ships and a 3 different scenarios in case just blowing each other up gets boring.

The counters come in sturdy, well laid out sheets. However this: 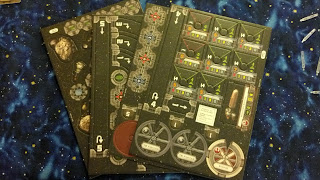 Quickly turns into this: 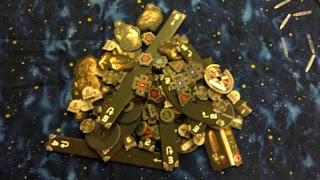 A little organization and you have several piles of counters that all mean different things: 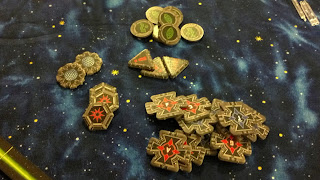 You have your various status tokens, such as shields, target locks, stress and action tokens. These are all used to make ships on the table so you know what you are doing. There are also number tokens so you can mark out which ships are which if multiples of the same ship/pilot are being fielded. 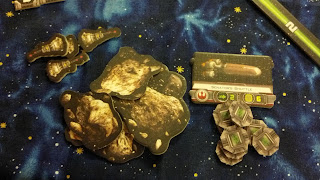 Next are your mission tokens, all of which mark out special things on the mission maps. Of particular not are the asteroids, which act as obstacles. Even if you are not playing a mission, these can be a fun way to shake up the basic dogfights. 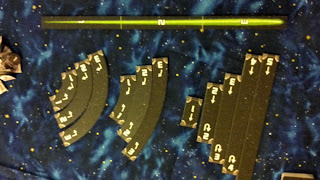 Finally we have all the measuring devices. These are clever as hell. Not only does this mean that you don't even need to own a tape measure to play, it speeds up game play incredibly. You can't move part way along a template. You just plop down the template and move your ship from one end to the other. No fuss, no muss. Just don't get cocky, kid. While it seems simple, until you get used to using the templates, it can be easy to pick the wrong maneuver and overshoot your target. But more on that when I do a battle report review. 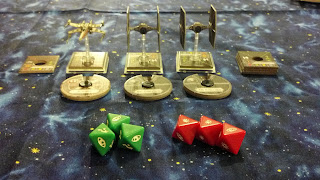 Finally we have the stars of the show, the ships and the dice! The dice are pretty simple: attack dice have attack stuff and defend dice have defend stuff. Both have focus results that can be turned into or attack or defend stuff. The dice probably could have been a little more high quality, but they aren't bad and get the job done. Bonus for the choice to use D8s, since D6s are so prevalent in games. 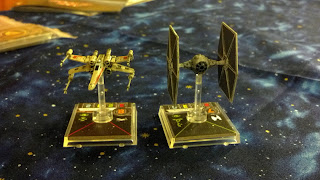 The ships themselves are amazing. They are totally in scale to each other, universe-wise, and are painted to a pretty high standard. They are at least as good as I could do, which is rare among pre-painted minis and they show no signs of warping. They are also pretty big for starfighters, sitting on 40mm bases and are held up by flight stands. On the one hand flight stands always look amazing, but on the other hand, they are fragile. I expect to snap at least a couple. Luckily you get a few extra, originally intended to add extra height if you want but they will soon be pressed into service as replacements, I'm sure.  The ships themselves are also pretty delicate as well. They are made of a plastic resin instead of the rubbery plastic most pre-paints are made of. I can see them easily snapping if too much pressure is applied, especially the attack foils on the X-wing. Be warned if you are a wookie or just have especially meaty hands. 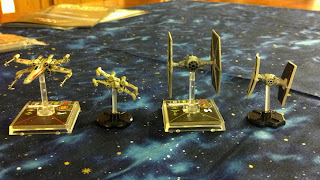 Of course I had to do a size comparison with their closest analogues from WOTC's starship battles game. As you can see, the FFG ships are quite a bit bigger and not melting. They are really done right. Trying to mix and match to get extra ships would look awful, but I suppose it could be done.

That's it for now. Hopefully I will be able to do a battle report/rules review soon. To whet your appetite, here's a shot of the minis on the table, ready for battle. 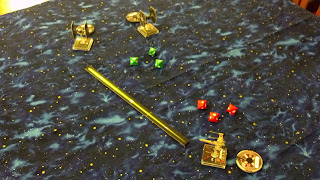 Happy gaming and may the Force be with you!
Posted by TheUndergroundLair at 11:05 AM