A Giant Among Angels

About a year ago, I celebrated getting a pretty good job by buying an Imperial Knight titan. That job turned out to not be so good in the long run but hey, at least I ended up with a Knight. About a week ago, at my current job with Black Moon Games hosted a big 40k mega battle. We had 9 players with 1500+ points each. It looked a little something like this: 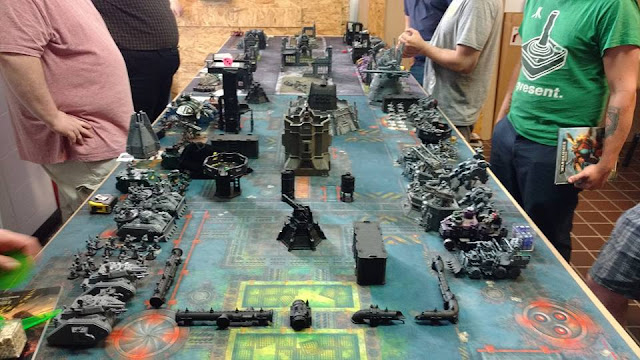 Of course, knowing this was coming up, I felt I had to bring something big to the table. You can see a preview of that big thing in the picture above on the left. If you haven't guessed already, that thing is my Knight titan. Seriously, if you didn't guess I am ashamed of you.

But before I get to the actual pictures, a little background...

House Feihn is the ruling house on the Knight World of Cullough. Only recently returned to the Imperial fold a scant 500 years ago, Cullough was rediscovered by the Dark Angels chapter of the Adeptus Astartes. Despite having lived outside of Imperial rule for so long, Cullough has become a staunchly loyal world and provides food and supplies to the Dark Angels, as well as occasional recruits. The Knight World's harsh, feudal society creates fierce warriors with unquestionable loyalty to their houses. As the ruling house, Feihn provides a fair number of these recruits as well as support from its knight titans when requested.

Most recently, Cullough found itself under attack by an ork Waaagh! that threatened to overrun the planet. Though their knights were able to defend the great bastions of the houses, aid was required to break the ork sieges. The Dark Angels' 3rd company responded, obliterating the ork forces in precise sweeps of bolter fire, driving the beasts up against the very walls they were trying to tear down. Seeing the orks boxed in, the knights sallied forth to slaughter the remnants.

Following the successful cleansing and rebuilding of the world, House Lord Kieran Feihn honored their rescuers by providing his youngest son, Aldric, and his knight titan to the chapter for permanent support attachment. Aldric is currently attached to the Dark Angels 3rd company.

Aldric Feihn pilots an Imperial Knight Warden named The Nephilim, after the giants born of angels in ancient Terran legends. He is well know in his house for his combat skills and the Dark Angels are glad of the firepower and ferocity he brings to each combat. Though never possessing the necessary attributes to be recruited for Astartes training, Aldric grew up with stories of the chapter's glory in battle and aspires to the same principles as the Emperor's finest.

Attached to the Dark Angels' 3rd battle company, The Nephilim bears the company's banner on its carapace, as well as the chapter's winged sword badge on Aldric's own banner. Of course, Aldric proudly displays House Feihn's heraldry on The Nephilim's shield.

Ok, enough of that drivel, on to the pictures! 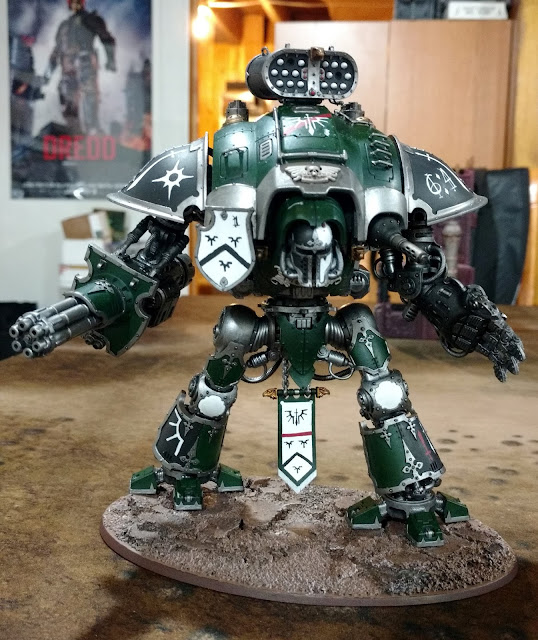 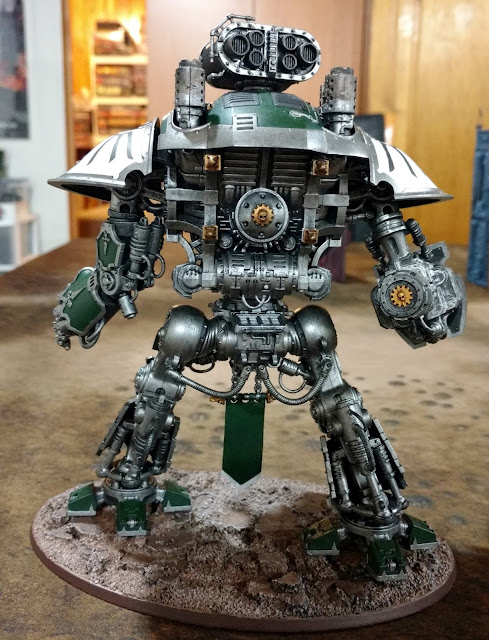 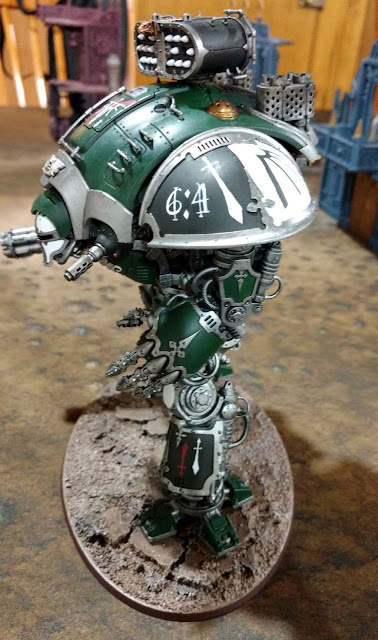 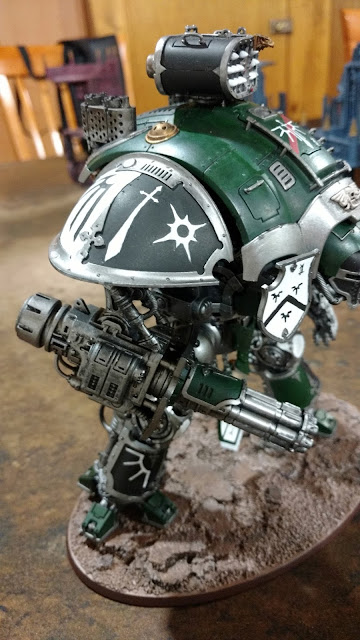 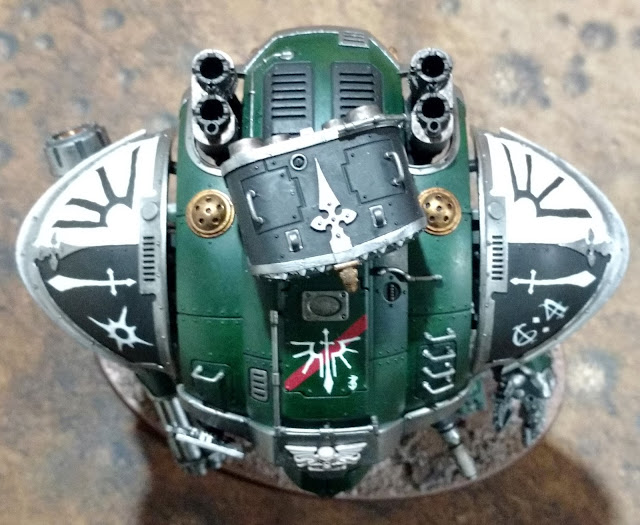 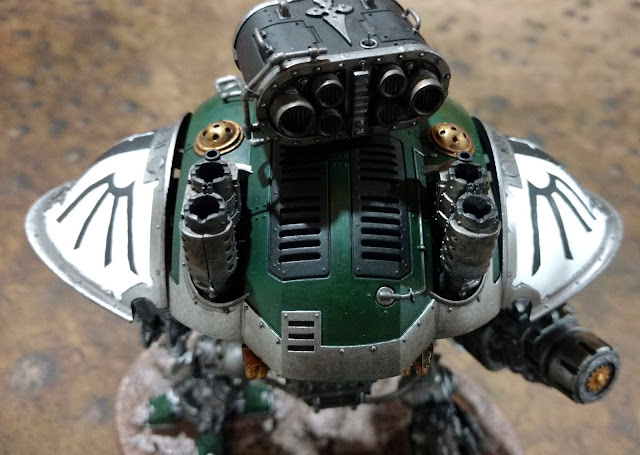 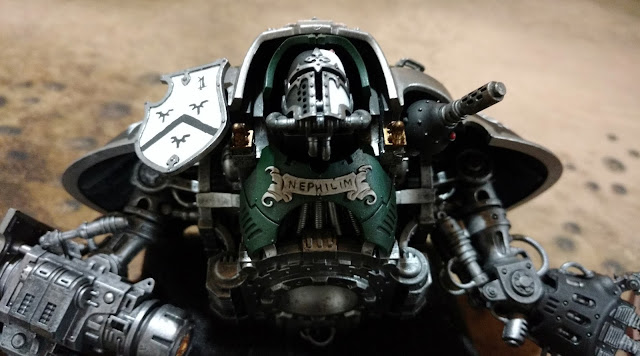 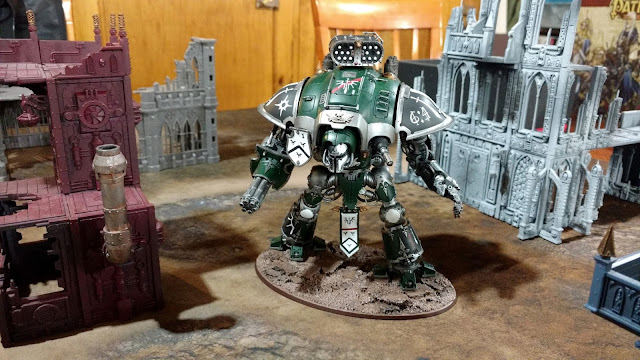 As you can see, he's covered with the requisite abundance of swords and wings, along with some Gothic numerals to spice things up. I am not super happy with the house heraldry, since I discovered it was a much harder design for me to paint than it looked at first. I am apparently terrible with U
shapes.

The base was a real pain. It is a resin base from a company whose name escapes me at the moment that I found cheap on eBay. The knight has already been mounted on the base it came with and the feet didn't quite rest properly on the new texture. Of course the feet are hollow, so in order to pin it, I had to fill a couple toes with green stuff. It is held in place with wood glue around the pins, but it still feels fragile to me. Hopefully I can find a good system in the future but for now it does the job.

That's all for now and thanks for reading. Happy gaming!
Posted by TheUndergroundLair at 12:54 AM