This past weekend my wife and I attended Boston Comic Con.

This was our first time going, and our first con in general, and we had a blast. So much happened that I honestly can't remember everything that happened, but I figured a few of my fellow nerds might like to hear my experiences. This is probably going to be long, so settle in. This is just the first of three days.

Bags packed, we hopped a bus down to Boston. We were both excited and terrified. 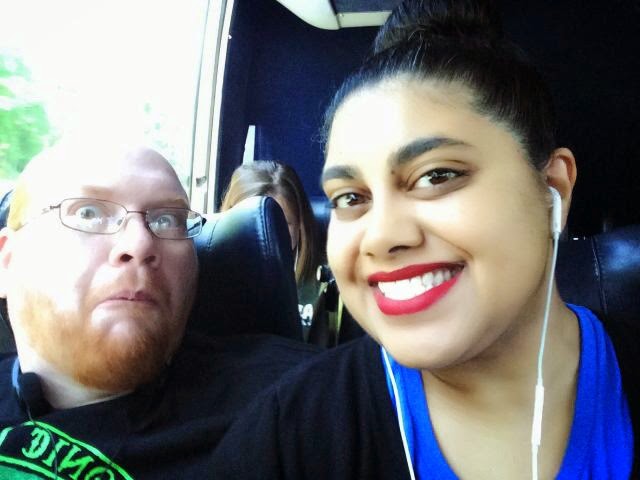 We left with enough time to get to our hotel, check-in and head right to the con. Luckily we stayed at the Seaport Hotel, which just happened to be right across the street from the Seaport World Trade Center where the con was being held. That meant we could exit the building and look right at this: 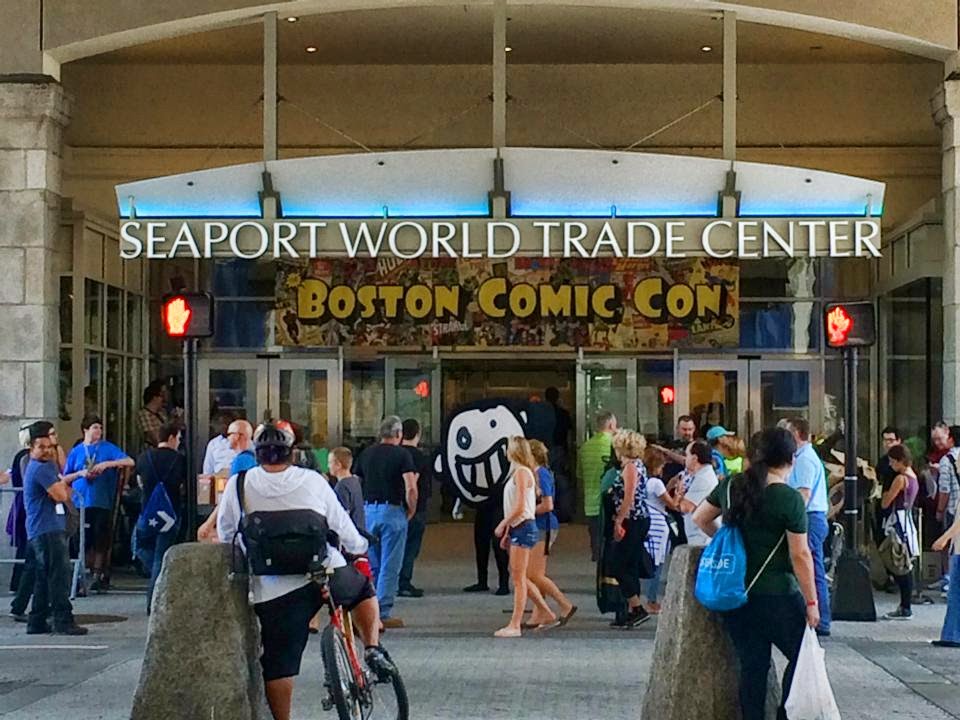 We didn't get a good pic, but there were two lines that went into the building: one that went down the street to the left and another that went down the street and around the side of the building to the right. We ended up in that line, and our timing couldn't have been better because the line ended up doubling, then tripling back on itself after that. Being smart, we got our bands ahead of time and didn't have to slow down to get scanned or buy tickets. 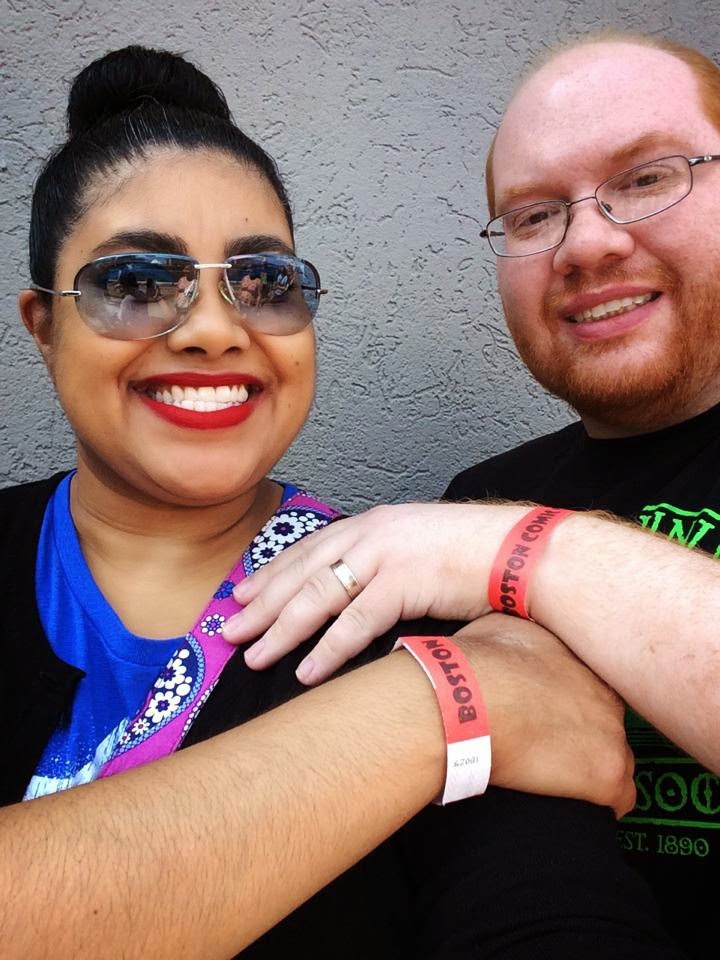 We had a little bit of time before the first Q&A panel, so we wandered around a bit.

We got to meet gorgeous cosplay maven, Ivy Doomkitty:

Took a short trip in the TARDIS:

And found some fuzzy, fluffy versions of the Doctor as well:

The first panel came up really quickly and we had to rush but we finally got to see Samwise Gamgee himself, Sean Astin. 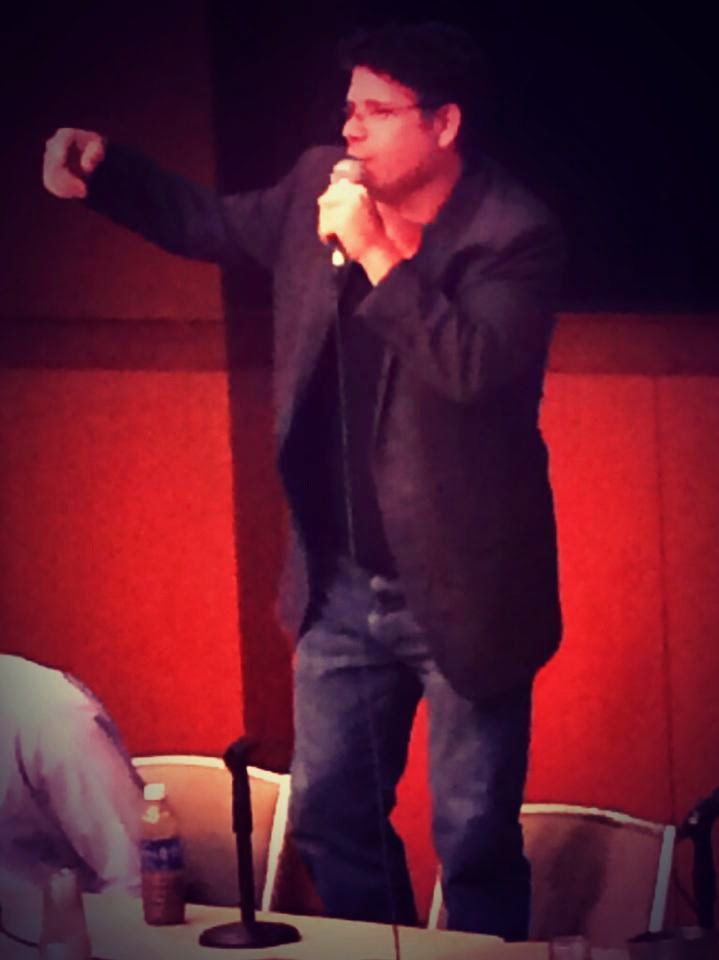 He was surprisingly higher energy than I expected and told some great stories. Most of the questions were about Lord of the Rings of course, but that was why I was there anyway. It was most thoroughly enjoyable.

This is where I get to impart a little bit of wisdom learned my first con that I will carry with me all my days.

At some point, as we did, you will realize that you haven't eaten all day. You will be starving and head toward the food line. This line will be filled with sweaty, cranky, hungry people, half of which will be wearing some sort of costume. As the line grows closer, you will get your first glimpse of the menu. Among the $3 cans of soda and $8 slices of pizza you will see what seems like a sensible option. The cheapest item on the menu, it still looks like a robust choice that should last the rest of the day. As you near the counter, you can finally see it, its smooth, pink skin glistening with drops of oily sweat and surrounded by an envelope of golden bread. The smell will make your mouth water, but I am telling you now.

Do not eat the Con Hot Dog.

Not only will it fail to live up to your expectations, it will dash all hopes you have had up until this point that food was ever an option. The hot dog itself will me dense and salty, sitting in your stomach like an anchor. The bun will be dry and tasteless, its abrasive texture flaying what few taste buds survive the hot dog's initial assault from your tongue. And the next morning you will have a bout of gastrointestinal distress that will leave you glued to the toilet at 6:30 am and questioning the merits of your religion or lack thereof.

We made this mistake. Listen to us.

DO NOT EAT THE CON HOT DOG.

After our "meal" we wandered around some more, and ran into the local chapter of the 501st. They had a great backdrop where we did our best to imitate action figures: 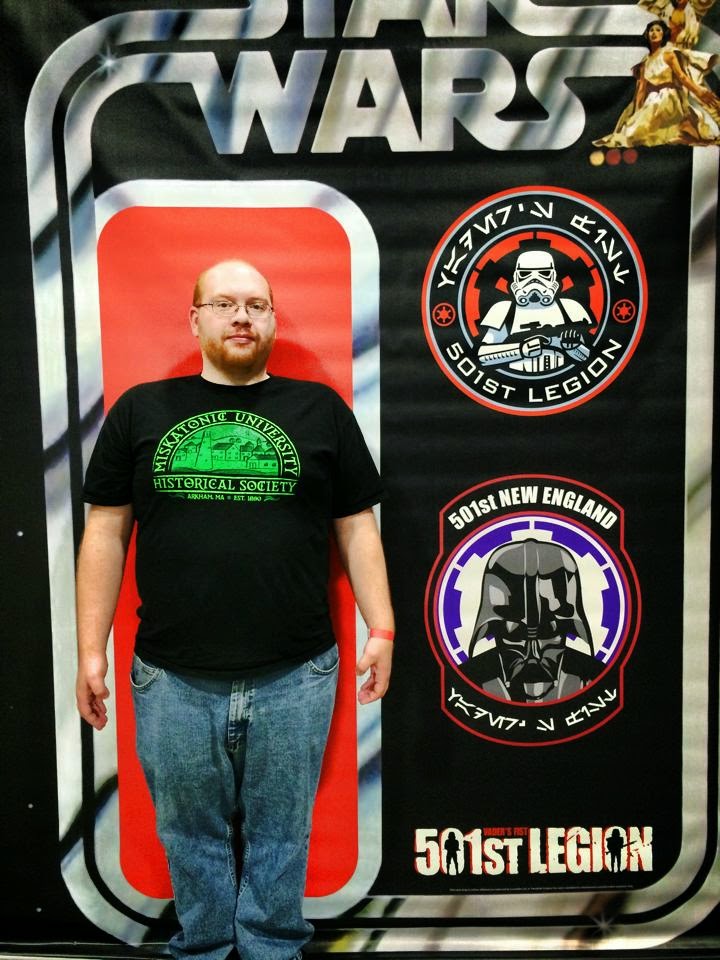 We also got to pose with both Rebels and Imperials: 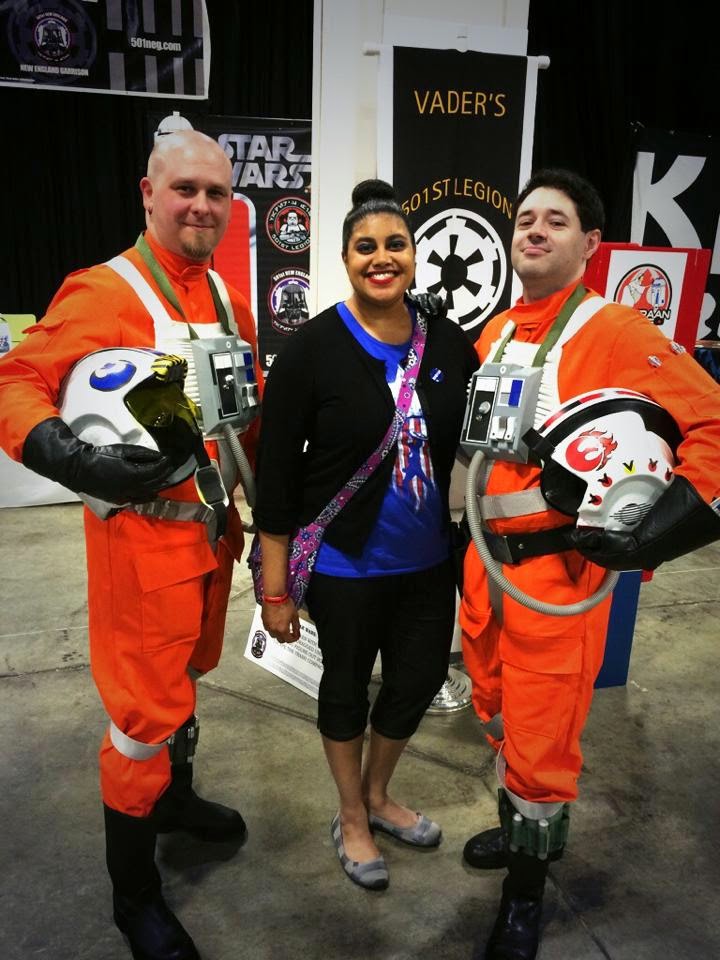 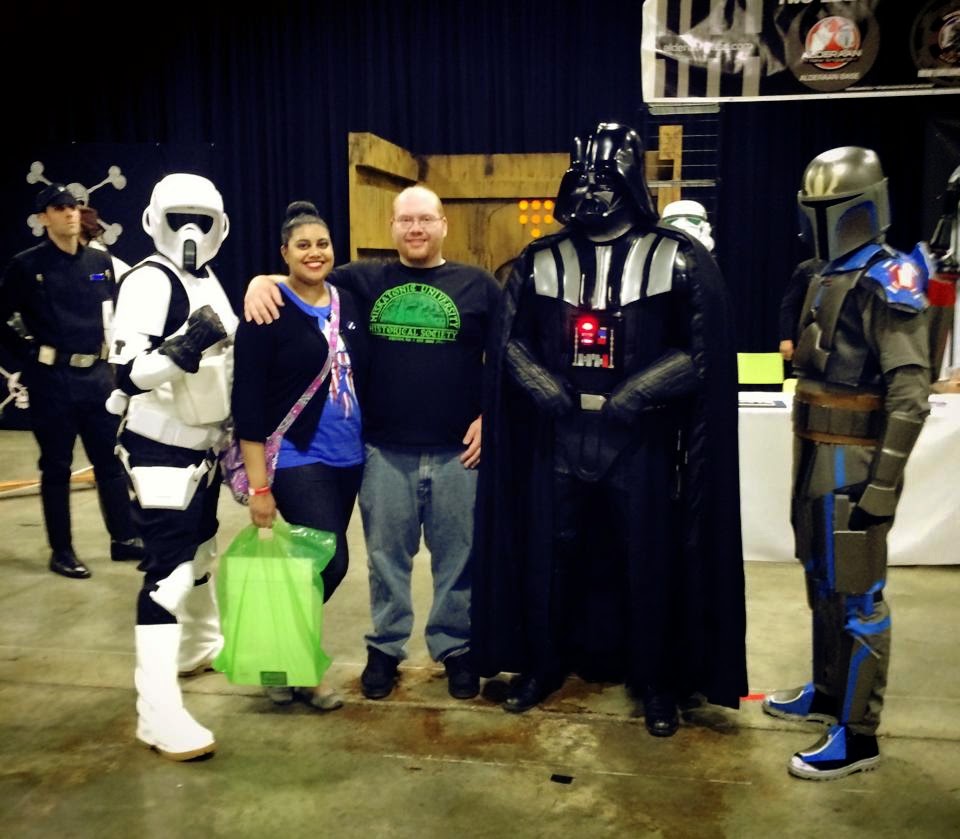 We also found a stand that sold some amazing prints. We bought five total, but these two are my pride and joy: 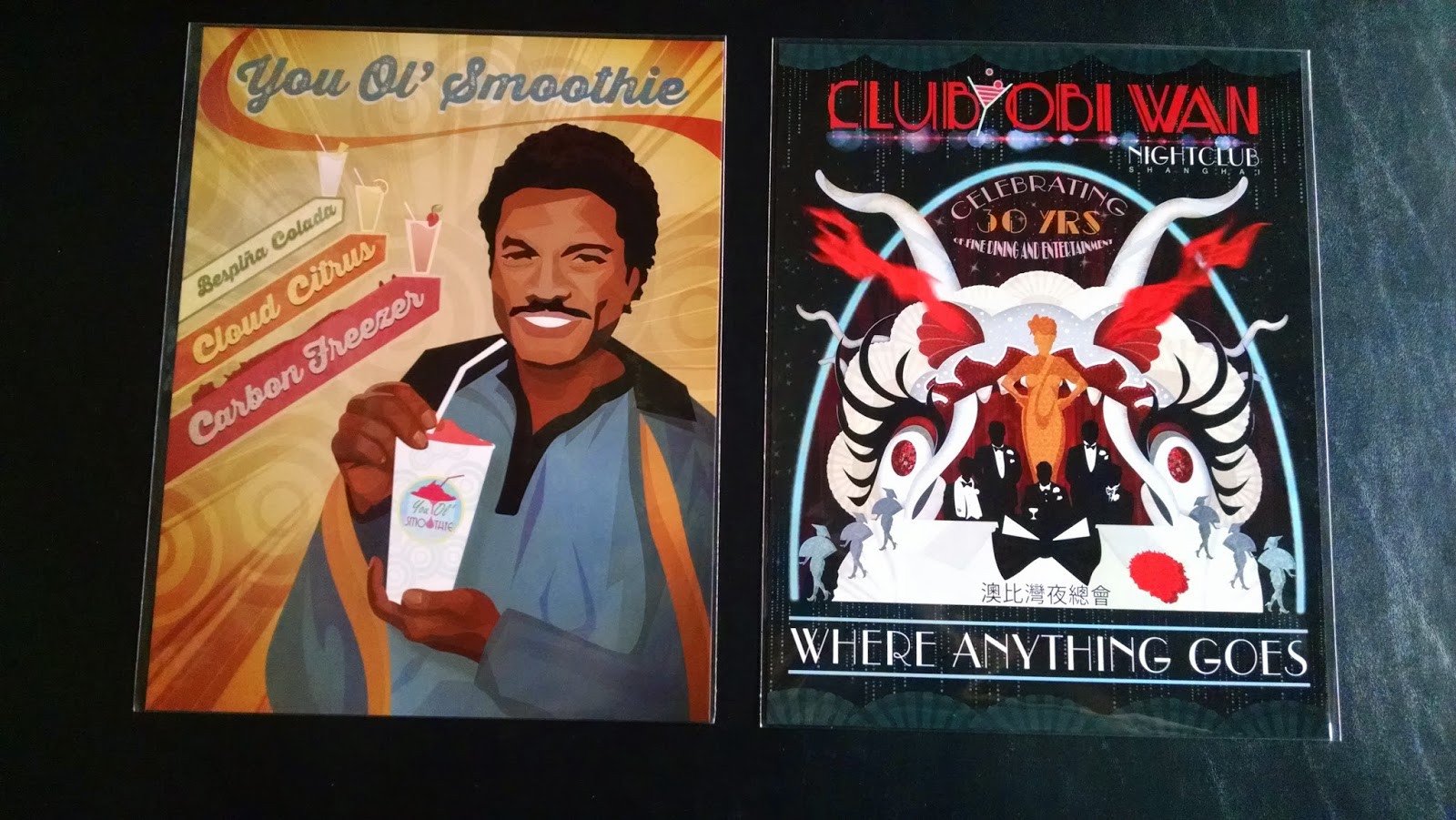 Those two are definitely getting framed an hung up in the ol' underground lair.

We ended our day by going to Jewel Staite's Q&A and that was an absolute blast. She was sweet and funny, and probably very sick of Firefly and Kaylee questions by the end. However, there was one event during the panel that was just amazing. You see, apparently Jewel and Nathan Fillion have been having a middle finger war for many years now, thinking of new ways to flip each other the bird at any opportunity, Jewel decided to get the audience in on this. She used her phone to take a picture of everyone there flipping Nathan Fillion off. About 15 minutes later, this ensued:

I don't think I've laughed harder in a long time. Getting to have Nathan call in and be a part of things was one of those amazing things that only happen at cons and I was thrilled to be a part of it.

After the panel we made our way back to our room and crashed hard, readying ourselves for another, longer day the next day.

So, that's it for my Day One report! Head on to Day Two!
Posted by TheUndergroundLair at 3:59 PM