The Lich King of Tir Norak

All right, time for another dungeon crawl! It's been a while since I've had time to work on my 3D dungeon and I've been itching to do some more playtesting on my solo dungeon crawl rules. So this time, instead of busting out a pile of half painted plaster-resin, I decided to use some of the stacks of D&D Dungeon Tiles I have lying around.

My SDC rules are a mix of Song of Blades and Heroes and its companion dungeon rules, Song of Gold and Darkness, plus a bunch of custom rules to populate the dungeon. Someday I may actually write some of them down, but for now they mostly occupy my head and a few tables in some spreadsheets. The biggest thing I need to playtest are the rules for scenic items (which sadly don't pop up much in this report; yay random tables!).

I had been working with a campaign system, but after some imbalances and a total wipeout of the party after my last (unrecorded) adventure, I decided to start anew and focus on the basics. I whipped up my party from the pre-experience days and threw them back in the dungeon fresh. And here are the heroes! 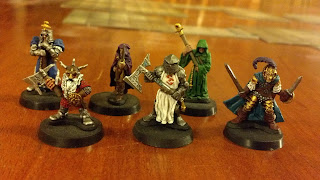 Our brave adventurers have learned that the tomb of the Lich King of Tir Norak has been uncovered by some bandits. While the lich has not been seen, the promise of riches has been drawing evil things to the tomb, and it is only a matter of time before he has been woken from his slumber. The brave heroes sally forth to destroy the lich before he can be awakened! 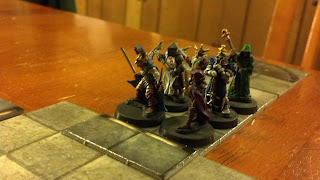 The heroes find themselves at the door to the tomb. The thief detects a trap rigged to the door, a needle laced with deadly poison. He is able to disarm it, but the trap foretells trouble ahead. 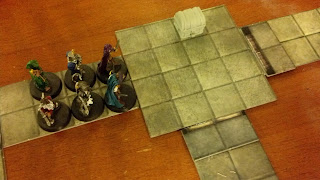 What luck! Behind the door lies a chest! From the scuff marks on the floor, it appears to have been dragged from deeper in the dungeon and left here. Hopefully its owners don't come looking for it soon. The chest is quickly unlocked and 400 gold is found inside! 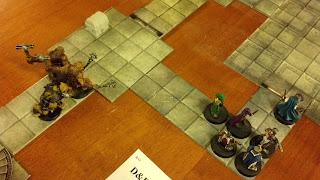 The heroes move down the hallway, but are soon alerted to the shuffling feet and coarse laughs of a troop of bugbears! There are howls of rage and it soon becomes clear who had left the chest. 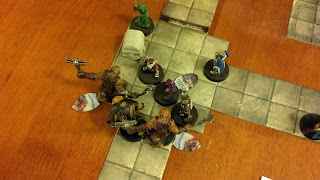 The heroes rush down the hall to meet them, and the elf wizard manages to enchant the bugbears, freezing them in their tracks. One shakes off the spell and deals the thief a stunning blow. 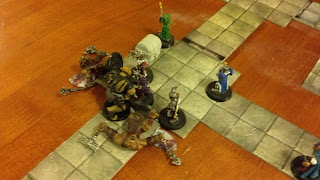 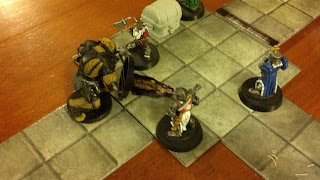 Short work is made of the frozen bugbears, but the free one leaps past its fallen comrades to press its advantage and slays the thief! 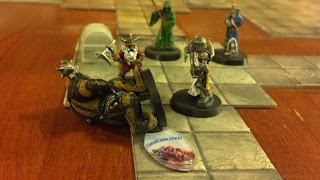 Enraged, the paladin rushes forward, swinging his axe. A burst of magical lights from the elf wizard blinds the beast, letting him be cut down easily. Checking the bodies, the heroes find strange spider tattoos on the necks of the bugbears, possibly slave marks. Saddened by the loss of their friend, they press on and hope there are more traps... 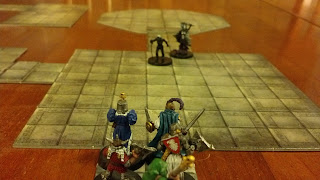 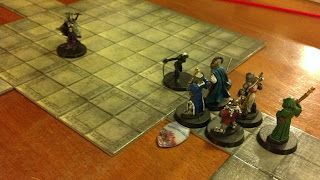 Opening the next door, the heroes see two dark shapes studying the door across the room. Dark elves! A witch and her bodyguard by the looks. They turn and the bodyguard rushes forward to block the elf ranger's path while the witch ensnares the templar warrior with bands of black energy. 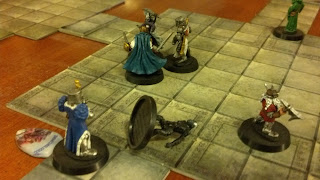 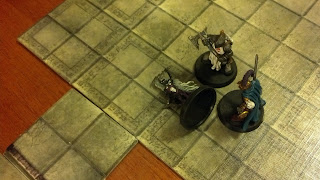 The elf ranger quickly fells the dark elf in front of him, leaping forward to engage the witch and clearing a path for the paladin to do the same. Surrounded, the witch is swiftly hacked to pieces. They find 600 gold on the corpses, plus a magic mace that is given to the templar when the spell holding him finally wears off. 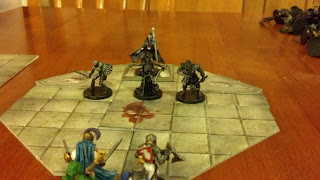 Obviously intrigued by the door the dark elves were inspecting, the heroes move forward and open it, ignoring the warning runes etched into it long ago. Behind the door they find a wizardly skeleton on a throne flanked by two statues. Three long-dead bodies lie on the floor. As the heroes enter, the skeleton on the throne rises and shouts an arcane spell, causing the bodies on the floor to rise. Looks like they found the lich! 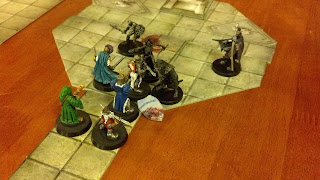 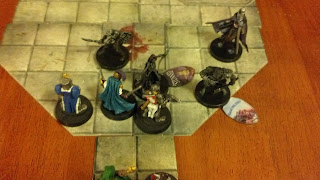 The crypt guardians shamble forward to engage the heroes while the lich freezes the paladin with a spell. The paladin shakes off the evil enchantment and the heroes press into the room aided by some magical support from their own wizard. 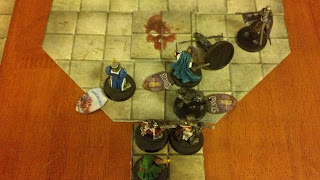 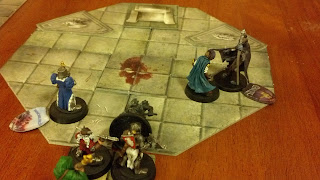 Fearing the banishing power of the templar, the lich weaves a spell around him, enveloping him in magical darkness. The elf ranger smashes a guardian to the ground, opening a pathway to the lich. 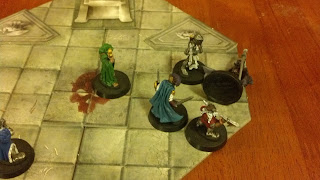 The lich is surrounded and immobilized by a spell before being hacked to pieces. The templar shakes off the now weakened spell and uses his holy power to banish the lich's soul, thereby ending his power forever! The heroes loot the room finding 800 gold! Now it is time to hit the tavern for food, wine and possibly find a new thief.

This crawl taught me a couple things. First, my 3D dungeon is nice, but the tiles offer me more variety and space to maneuver in. The 3D dungeon is a little cramped. I won't be switching to tiles exclusively, but I will probably be using them a little more often in the future.

Second, spell-casting enemies need extra support to make them a challenge. The dark elf fight went rather quickly and the witch wasn't much of a threat with only one bodyguard. Meanwhile, I added an extra guardian to the lich fight and that felt like a real fight. The lich wasn't too tough to handle, but I felt like a wrong roll with all that magic flying around could make things go badly very quickly. I'm going to have to re-jig my encounter tables a little in the future.

So that's it for this quest. Happy adventuring!
Posted by TheUndergroundLair at 9:56 AM