Well, it's been a while since I've posted on here. Almost two full months in fact. A combination of real life and a horrible sinus infection will do that occasionally.

But when I came across this discussion on The Miniatures Page, I was reminded of an old friend from my formative days of gaming: Dragon Dice! I was also surprised to find out someone still produces and sells them!

Originally released in 1995, Dragon Dice was TSR's bid to try and drag people away from the Magic: The Gathering craze at that time. It didn't quite succeed, but it did bring something unique to the table. Now at that time I was 13-14 and already a mega nerd. I had already discovered Magic and I was completely ensconced in D&D whenever I got the chance. When Dragon Dice hit shelves, it seemed like the best of both worlds: A collectible game with dice plus elves, goblins and dwarves. TSR got peanut butter all up in my chocolate.

I was hooked immediately. Whenever I wasn't shuffling Magic cards, I was rolling Dragon Dice. I suppose at that age, there were very few activities that I engaged in that didn't involve repetitive hand movements. 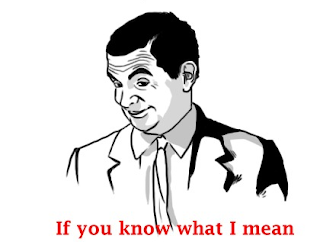 Anyway, I had very loving parents that encouraged my hobbies even if they didn't understand them and probably cried themselves to sleep at night, so I had a LOT of Dragon Dice. I had long ago buried them in my parents' basement, but they were not hard to find. And I guess I had forgotten that I had acquired so very many of them. How many dice, you ask? This many:

I remember at the time I was a big fan of both Lava Elves and Dwarves. Since my Dwarf dice were better, they became my chosen race. I carried them in my the Earth (yellow) dice bag, and I absolutely had to have the official Dwarf play mat: 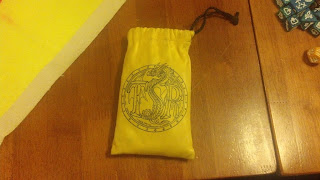 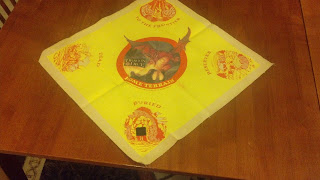 For practical purposes, the mat was a terrible idea. First of all it smelled like a corpse when first unwrapped. The game with two players can be played on a space approximately 18 inches. Because of its awful diamond-shaped design, the mat required a single player to have about two feet of space of his own. If two people had mats, you were so far apart you could barely see each other's rolls, let alone reach over to roll your own dice at your opponent's home terrain. My 14 year old brain solved this problem by letting the Buried area hang off the table and I Velcroed my dice bag to the spot to hold the dice.

Despite this I used this mat in every game and I loved every second of it. I have long since lost any clues to what my old armies might have been. So I sat down and pooled up some small 18 health armies from each of the original races, plus the basics to play some games:


Terrain and dragons were very important. I distinctly remember gravitating toward Dwarves because I didn't really have the right dice to play others. A second Highland and some green or blue dragons would have fixed that. The kid-that-has-disposable-income in me ordered a couple of green dragons off eBay just to even those out, but I don't think I'm going to spend any more on it for now.

I'm hoping to engage some of my former opponents (i.e. my cousins) in some battles over the holiday weekend. I certainly have enough dice to go around. It just remains to be seen if we can still move after all of that sweet, delicious ham. 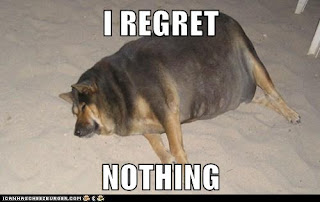 Have a happy holiday everyone, and don't forget to roll some dice!

Posted by TheUndergroundLair at 1:13 PM