Into The Deep Dark...

Recently I have been fiddling around with using Song of Blades and Heroes to create a good solo dungeon crawl system that fits my needs. I own a copy of Song of Gold and Darkness, but have found it too focused on two players. There are a lot of great ideas in it though, so with that along with Song of Deeds and Glory (for campaign/experience rules) and a generous helping of homebrew, I started my first real playtest dungeon: 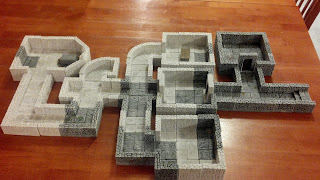 The layout above is a testament to both the awesomeness of Dungeonstone's advanced set and my monumental laziness. I've had the set since March and it only has 3 colors. You'd think I'd be done by now. 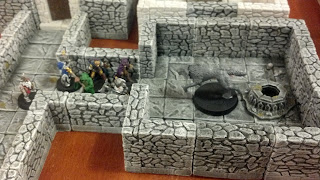 Nevertheless, my heroes set off into the dungeon, paladin and rogue in the lead and the dwarf fighter taking up rearguard. Opening the door to the first room, the party is surprised to find a giant wolf guarding a fountain! It leaps forward to attack! 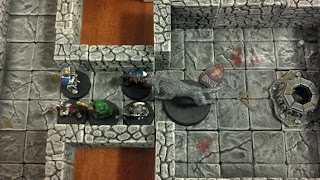 Turns out that fountain has magical properties that sustain the wolf, leading to a tough fight. The rogue is taken out of action almost immediately. Here's hoping there aren't any traps ahead. Eventually the wolf is put down, but there is no treasure to be had here. After the first casualty, the dwarf and elf take the lead to deal with tough fights ahead. 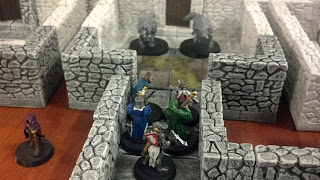 Is this place a kennel? The next room yielded more wolves (hooray for random tables!) tucked behind a patch of poisonous fungus. Also no treasure here either (boo, random tables!). 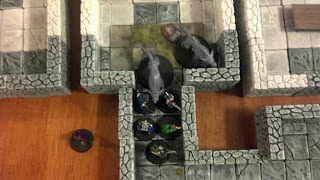 Luckily, wolves are dumb and charged across the fungus themselves. One is unaffected, but the other ends up with a face full of spores and a coughing fit for its efforts. The wolves go down quicker than the first and everyone makes it through the fungus unharmed, although the paladin had to stop briefly to sneeze a bit. 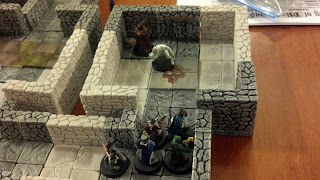 The door to the next room was locked, but teamwork quickly bashed it open in the absence of the rogue. Behind the door waited a crystal golem commanded by a wizard who was ready for trouble. The heroes could feel that fell magics had been cast here and the ground itself felt cursed. 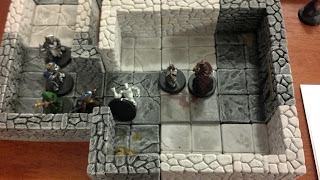 The golem surged forward, but the elf quickly reduced it to sparkly rubble. An opening found, the dwarf charged in and hacked the now defenseless wizard to pieces. The heroes once again found no treasure to reward their efforts. 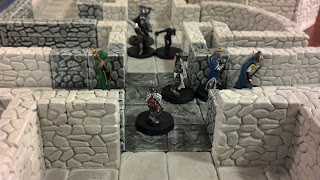 Pressing ever onward, the heroes move down the opposite corridor. Suddenly, dark shapes move out of the shadows of the intersection. An ambush! A couple of dark elf warriors led by a witch rush the unsuspecting heroes! 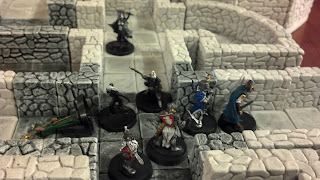 In a flash of blades, the wizard is laid low! Now with no magical support and a flank attack, things look grim... 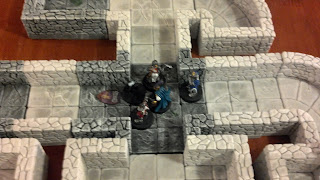 But the paladin has no tolerance for such evil creatures. He quickly smites a warrior, then the witch, letting his comrades mop up the survivor. 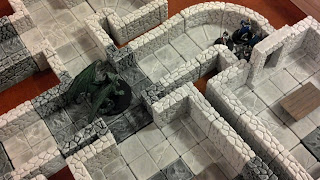 The heroes almost make it to the next room before lumbering footsteps and scraping scales echo down the hall. A small (-ish) dragon has heard the battle and come to chow down! 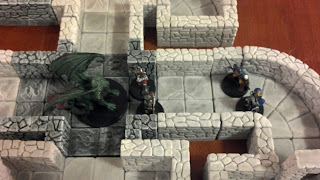 Dodging a gout of flame, the paladin and dwarf rush in. The paladin stuns the beast, letting the dwarf make short work of it. Who said dragons were dangerous? 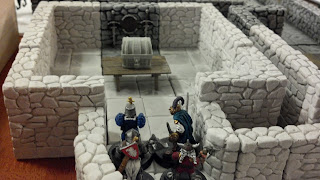 Finally, treasure! One bashed down door later and the group was staring at a huge treasure chest. It was quickly opened to find...10 gold coins. They fought a dragon for this? 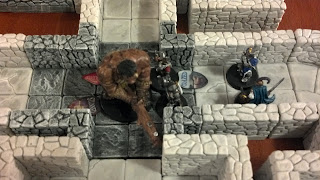 Obviously drawn by the scent of dragon meat (or looking for his now-dead pet), a giant lumbers down the hall. He hurls a couple rocks before getting hacked up and left in the pile that has accumulated in this intersection. 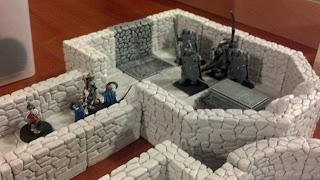 The final room! The door swings open to reveal a tomb that will surely contain treasures of old. However, first the heroes will have to fight off a Chaos Mage and his bodyguard who have come to loot the tomb as well! 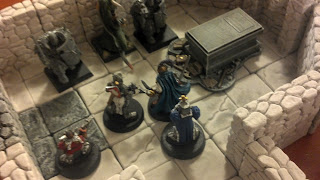 With blinding speed, the elf ranger leaps forward and cuts down a Chaos warrior while the other villains stare in stunned silence... 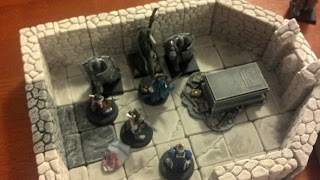 Giving the elf the opportunity to engage the mage himself, though not before the paladin finds himself ensorcelled. As the mage utters the final few words of the spell, the elf gruesomely disembowels him with his blades. The sight causes one bodyguard to panic, letting the dwarf hack him to bits as he tries to flee. 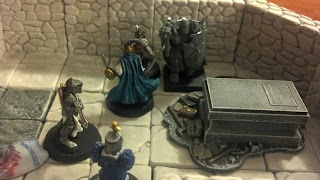 The final bodyguard foolishly holds his ground and is gutted by the elf. The tomb is opened and reveals 100 gold pieces! Finally, some reward! There is also a potion tucked beneath the old bones.

In the aftermath of the quest, the rogue recovers from his wounds, albeit having been looted for his gear while healing. Five gold pieces later he is re-equipped. The wizard is not as lucky and succumbs to his injuries. A new wizard is hired and reveals the potion found in the tomb to be a potion of speed. Healing potions are purchased and distributed to prevent future casualties.

I have learned a couple things from this adventure:

1) Tailor your encounter lists. While it is fun to have randomness, it makes a better story if you have a theme. It also means that you can use more of the figures you want. I ended up using a lot of unpainted figures because I rolled things I haven't gotten to yet. Granted, my dungeon isn't done either, but at least if I had made lists to suit my collection, I could have had more color.

2) The scenic features in  SGD are not necessarily the ones I want to use. I will probably come up with custom rules more suited to what I have on hand and more what I envision in a dungeon setting.

3) I may add at least a little treasure to each non-wandering encounter. Not getting paid for getting stabbed in the face sucks. Not a lot though. Like 1d6 coins or something to represent pocket change.

That's all for now. Maybe on my next trip into the dungeon I'll bring you with me again. *winks*
Posted by TheUndergroundLair at 10:37 AM