For this installment of Favored Enemy, I'm going to take a look at Wizards of the Coast's new miniatures game offering, Dungeon Command. 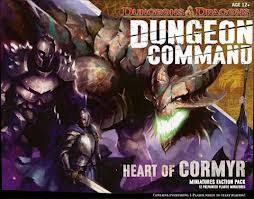 This won't be a true Favored Enemy column, since I have only played two games so far, but since it is new and I'm fairly excited about it, I wanted to give everyone else a look. Like all FE posts, this won't be a true review. I'm just going to ramble on about what I like and don't like (so far) and you're going to sit here and read it. Or go to a different website, because I suppose that's an option too. But I hope you don't. Please stay?

Anyway, before I left on my honeymoon, I cleverly pre-ordered both of the initial sets of Dungeon Command and, lo and behold, they were waiting for me when I got back. I may have squeeled like an 8-year-old girl when I collected our mail, or at least that's what my wife says. But since I'm the one writing this, I definitely did not. It was more like a 13-14 year-old girl at least.

The two sets I got were Sting of Lolth, a drow based set, and Heart of Cormyr, which centers around adventurers of various human and demi-human races. Each contains a pre-determined set of 12 miniatures and some pre-constructed decks of order and creature cards, along with dungeon tiles to play on and loads of tokens and counters.

Upon opening the box, I was impressed with the artwork and box quality: 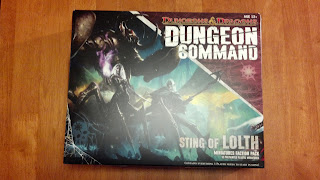 The box cardboard is thin, but unless you really mistreat it, it should hold up just fine. I also liked that the box had a little latch built into it. They definitely intend for you to keep using this box to carry your miniatures, which the inside box set up also shows: 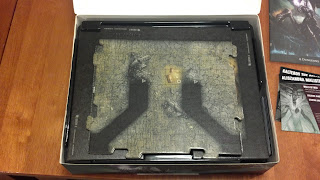 As you can see, the tiles sort of "lock" into place over the inside tray, and do a marvelous job of keeping everything in place. Even after turning the box completely sideways , nothing shifted. I haven't been brave enough to turn it upside down, but I can imagine only a couple pieces escaping, and the latch ensures that it will never spill open.

And speaking of the tray, everything inside is marvelously organized: 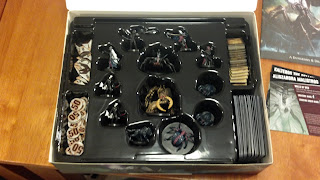 Each miniature has its own cozy little hole to live in and all the cards, tokens and counters have a spot of their own. It makes the little OCD part of my brain very happy, though I am already scheming ways to separate the tokens up even further with little plastic bags and such.

The rulebook is well laid out and the rules very easy to learn. The book itself its more like a pamphlet or small magazine and I was interested to see that each box's rulebook had a cover unique to that set: 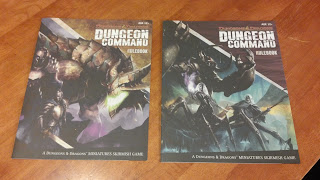 It is a nice touch, but hopefully they move to something more generic in the future. I can't imagine it is cheap to commission new art for each set and the contents of the rules are exactly the same otherwise. I wouldn't like to see art costs drive the costs of the game up (or kill the game) for something that's kind of unnecessary.

The game itself is very simple: summon monsters to your start area and they move around the board, square by square, and attack your opponent's creatures. You can collect treasure to boost your warband's Morale (which goes down as you lose warriors; reach zero and you lose, kind of like "life points"). Rinse and repeat each turn until someone wins.

Two things really stand out, however. The first is that you have a deck of Order cards, which let your creatures perform more and different actions than just the basics. The second is that there are no dice. This is very different from other D&D games, and especially miniature games in general. Instead, you tap a creature's card (much like in Magic: The Gathering) and you do damage automatically. It was kind of hard to get used to at first, but I really like this aspect because it creates a more puzzle-like game where strategy is everything. The Order cards introduce a little bit of randomness and can prevent damage, but you have a lot more control of how and when you deal or prevent damage. 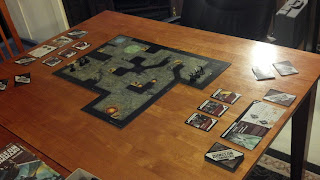 Setup takes up a little more room than your average board game, but this won't be new to miniatures gamers. Those just buying in expecting a board game will find the space issue somewhat of a problem. Each person needing their own box to play, however, should be a decent clue that this isn't your average board game. Incidentally, the boxes are set up to provide a well-balanced sample game out of a single set, with the miniatures and cards split between both players using a smaller board set-up. It isn't a full game experience but it is a great way to learn. 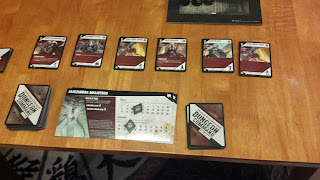 Each box comes with a choice of two commanders with different abilities that affect your warband. Some provide more Leadership/Morale (which summons more creatures or act like "life points" for your warband respectively) while others give you bigger Order or Creature card hands, affecting your options during the game. Each commander also provides a special ability to shake things up. 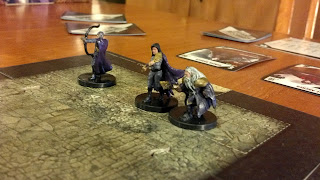 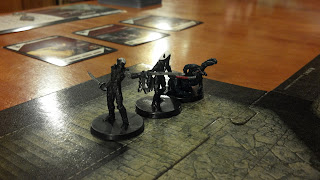 As you can see, the miniatures are pre-painted. They are pretty much the same quality as WotC's other pre-painted models in the past and many are re-issues of those same figures with different paint. They aren't terrible, but they aren't great either. They get the job done though. I would have like to see a little more variety in the colors and the drow are just plain too dark.

The tiles are the same quality as other D&D tile products and are thick and durable. Best of all, they have puzzle-like hooks on the edges, similar to the D&D adventure board games, that keep the battlefield together during play. This is very handy if you bump them accidentally. The textures on the dungeon side are beautiful, but I am not entirely happy with the outdoor sides on the reverse. 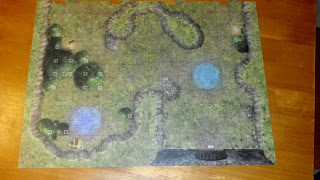 It's less about their looks and more about outdoor battles are handled. Aside from slightly different looks and terrain, there is little to distinguish them from dungeon battles. Hills are treated as walls, so even flying models can't move over them. It would have been nice to see hills be more like difficult terrain that provided a high ground bonus, since that would have at least changed outdoor tactics and given a reason to choose it over dungeons. There are even random magic circles and treasure piles scattered around for apparently no reason. 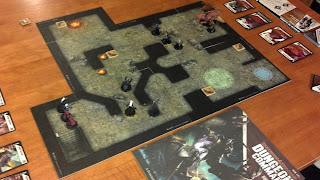 Ultimately, though, I find the game fun. It plays fast, allows for strategy unhindered by horrible luck and has fighting in dungeons, which always makes me happy. It has a lot of room for expansion, and there are two more sets announced this year, goblins and undead. In fact, you are not limited to playing a single faction out of the box. There are rules to create your own decks of order and creature cards, and there is some benefit to getting multiple sets, although for a casual gamer such as myself there is no real need. So far the sets seem very balanced, and play uniquely, with many options within the set itself. So far I am favoring Heart of Cormyr, as they are very much my playstyle, but maybe as I play more and get used to the drow I will change my mind. Or maybe one of the new factions will steal my heart. Time will tell.

There is one surprise in the boxes that I found most welcome: Each box has a small set of cards to use in the D&D Adventure System games. If you own Castle Ravenloft, Wrath of Asahardalon or Legend of Drizzt, then Dungeon Command is a great addition. A small handful of the miniatures in each set are painted versions of ones in the AS games, and come with new cards so they can be used as new monsters for custom scenarios. The Heart of Cormyr set has the best addition, in my opinion, as it allows allies for the AS system heroes to encounter and get help from. It is a unique, fun addition that adds new rules instead of retreading the same monster/encounter ground.

There is a lost opportunity, in that no AS scenarios using the new cards were included. As it is, there are no real guidelines for making new scenarios and encounter decks in the base AS games, so it would have been nice to see something added for the less experienced players who aren't quite comfortable with making new scenarios yet.

Dungeon Command gets a big thumbs up from me and I hope you try it out. If you are still on the fence you can check it out by reading he rulebook here. The price tag is $39.99 per set, but if you look around you can find some good deals.

Posted by TheUndergroundLair at 12:48 PM