This battle report I have already posted on my Facebook hobby page a couple weeks ago, but I wanted to re-post it here so more could see it. This is a Song of Blades and Heroes skirmish using a portion of my Games Workshop Lord of the Rings miniatures collection. 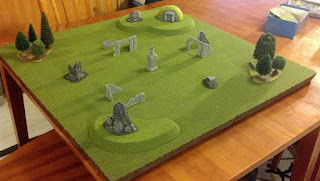 The bones of ancient cities lie scattered through the wild lands, seemingly peaceful... 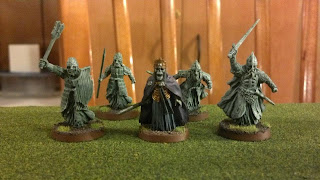 But the ghosts of long dead evils stalk the ruins... 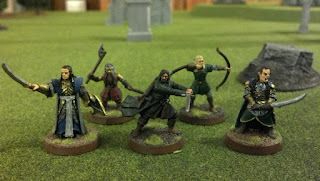 And those who would fight against them are few, but brave. 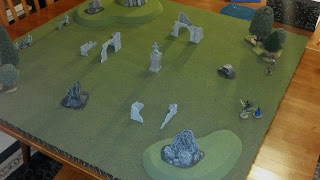 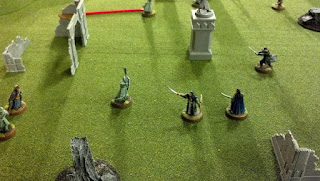 The heroes rush to meet the ghostly threat among the ruins 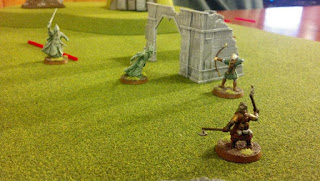 One of the wights closes on an elf archer as elven arrows pass through it with no effect. 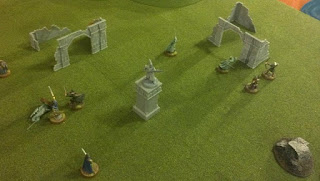 The elf mage uses an enchantment to bind one of the wights in place, allowing his kin to move up and banish it. The ranger cautiously moves up to support the victorious elf, heartened by success. The dwarf rushes to intercept the evil spirits bearing down on the elf archer, but he may be too late.. 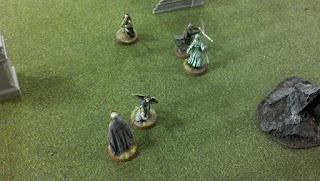 The wight lord charges the ranger, sending him fleeing and
a lesser wight chases him down, leaving a hole in the line. 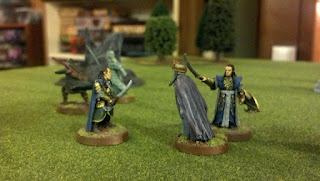 The wight lord slips past to threaten the elf mage, but his warrior brethren comes to his aid,
intercepting him but having a portion of his life essence drained for his troubles.
Meanwhile, the ranger drives back the wight chasing him. 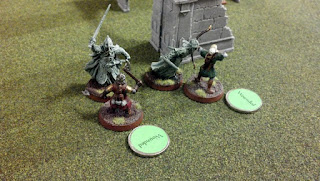 The elf archer and dwarf fight valiantly, but the life draining wights take their toll. 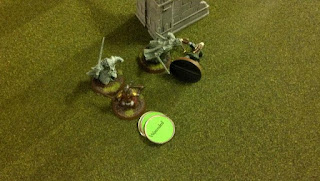 The elf archer slumps to the ground as his life energy is drained away,
leaving the dwarf alone against the undead. 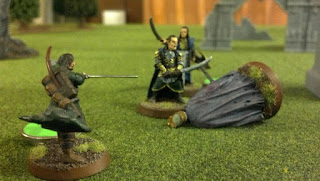 After being driven back by the heavily wounded elf warrior, the wight lord is knocked off
balance by a blast of magic from the elf mage. Seeing his opening, the elf mage
rushes forward and sends the wight lord back to the nether-realm. 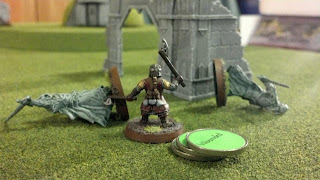 Finding himself wounded and outnumbered, the dwarf readies for death. However, as the wight lord disintegrates, the remaining wights lose their grip on the mortal world and vanish.
The dwarf breathes a sigh of relief. 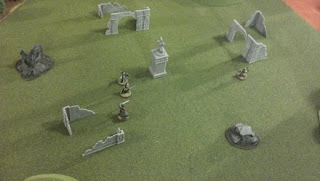 The undead destroyed, the ruins are at peace once more.
The heroes mourn their fallen comrade, but celebrate evil's defeat once more.

This was a fun skirmish. It was interesting using a warband that all had the Drain special ability. It can be quite devastating when applied in numbers, since it makes it harder and harder for your opponent to activate. My only complaint would be the same I have with all Undead models I use: Morale. It always seems like no matter how good the quality on my undead is, I always roll at least a single 1 and it crumbles. I may try playing as requiring 2 failures in the future because morale just seems to have too much effect on the undead when I play them.

Posted by TheUndergroundLair at 12:08 PM