Greetings fellow gamers! It has been a long, long hiatus and I finally have something I feel like posting about! 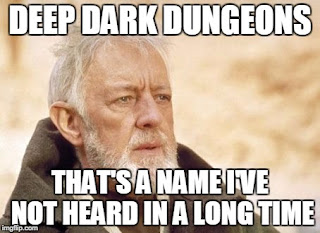 With the new edition of 40k, I decided to start my own custom chapter, which is really a chapter I started building a decade ago, but suffered some setbacks and ultimately abandoned. The new primaris space marines have given me the inspiration to push forward and I've assembled the force. Of course in my usual fashion, I've painted very little since I started collecting them in June.

But before I get to the pics, though I want to share a little background. The army started as a Crimson Fists stand-in and was originally planned as an almost pure drop-pods and veterans force. With the advent of the primaris, things have shifted but the ear-marks are still there: stubborn veterans who strike deep into the heart of the enemy to crush it's most vital armaments. Incidentally, even though they are sons of Dorn, I use the Iron Hands chapter tactics. Hopefully you can see why below. Anyway, I'll let my little chapter blurb do the talking.

Parent Chapter: Imperial Fists
Symbol: Sword with broken blade (white on purple).
Heraldry: Purple and black.
War Cry: "We are the shield of the Emperor! We are the hammer of Dorn!"

The Swordbreakers take the legendary stubbornness of Dorn and weaponize it. When the enemy makes siege, the Swordbreakers bring the siege to the enemy. Each marine is a walking fortress, shrugging off grievous injuries through indomitable will while laying down hails of withering firepower from which there is no escape. The Swordbreakers strike deep into the heart of enemy lines, seeking to carve out their artillery and elite troops. Each mission is near suicidal, and Swordbreakers have earned a reputation for iron-willed tenacity. Each warrior emerges from these baptisms of fire a battle-hardened veteran, thrust into the midst of dangerous combat even few other astartes see.

The heavy losses and injuries sustained by the chapter give rise to a large number of dreadnoughts, further epitomizing the impregnable fortitude of the chapter. If each marine is a walking fortress, Swordbreaker dreadnoughts are lumbering bastions of death, crashing into the foe and breaking them upon their heavily armored bodies.

Severely depleted prior to the division of the galaxy, the Primaris marines were a welcome addition to the chapter’s ranks. Merely 300 of the original chapter’s marines remain, now comprising most of the upper leadership. In addition, the chapter’s entire 1st company is entirely comprised of the chapter’s original astartes. The 10th company is also trained by original Swordbreakers, maintaining the traditions of the chapter. The rest of the battle companies are almost pure Primaris, with non-Primaris marines serving in mentorship roles at a leadership level. The Swordbreakers see the Primaris as the inheritors and future of the chapter, and as such strives to put them at the forefront of their operations.

So you have the background, now on to the pretty pictures. First we have Lieutenant Kurgos Vaughn, of the 4th company. Vaughn is an accomplished veteran and carries an honor-mark over his right eye to attest to his valor. 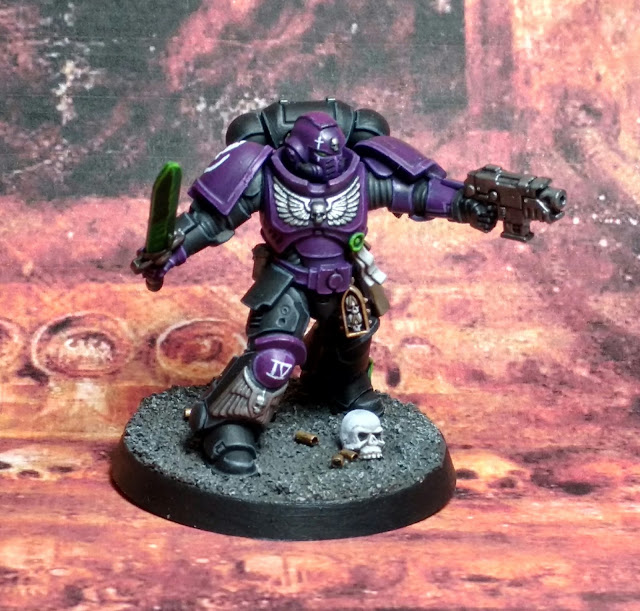 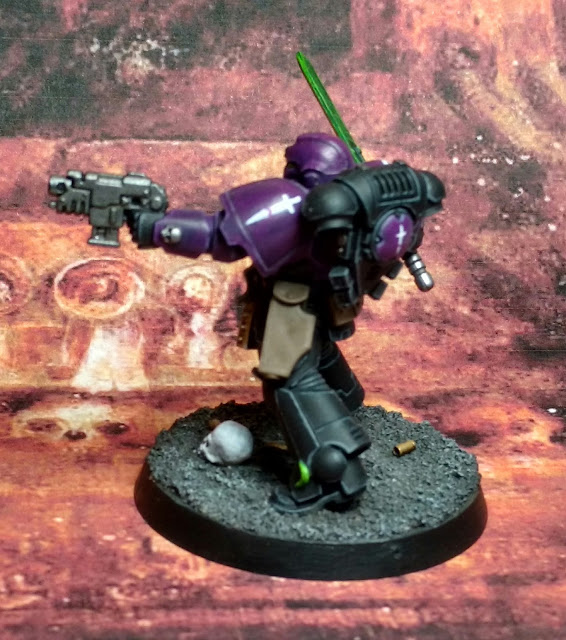 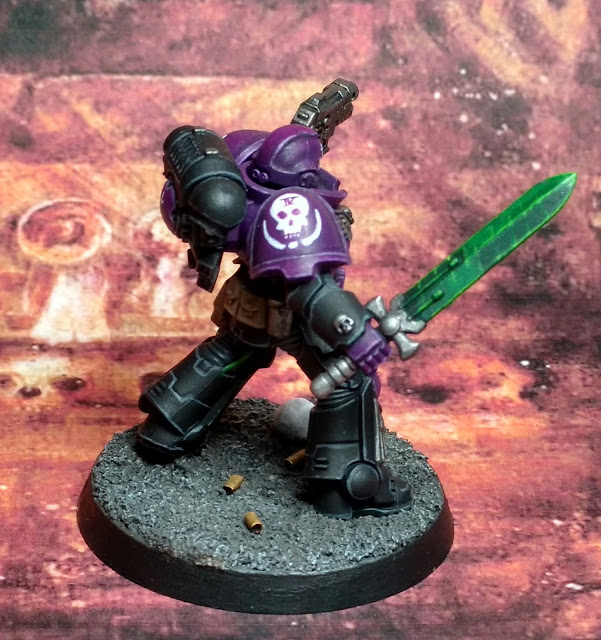 As you can see I went with a semi-half black/purple scheme. I used bright green as the highlight to make it really pop, and white for markings so they would be highly visible.

Next up we have Chief Librarian Heinrich Voss. Even though Voss is one of the less seasoned primaris marines, his prodigious abilities and deep wisdom earned him a rightful selection to head the chapter's librarius. 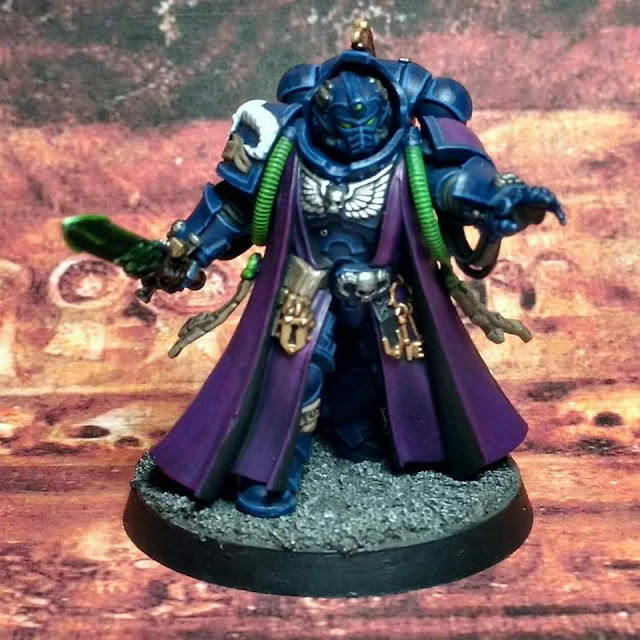 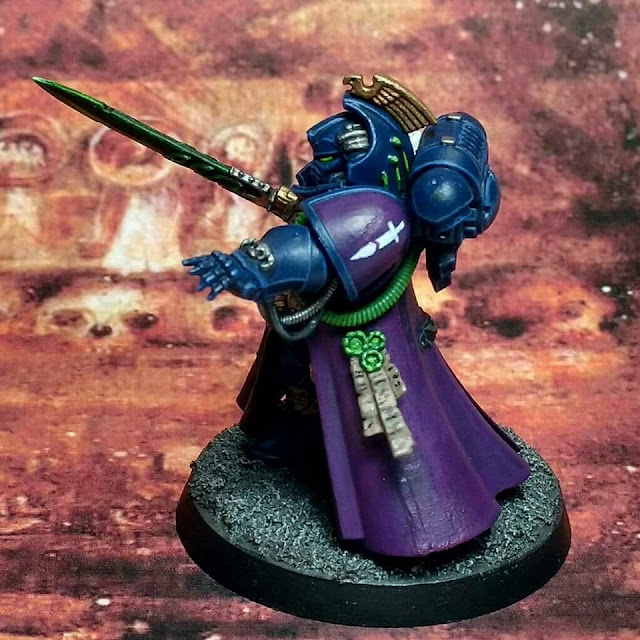 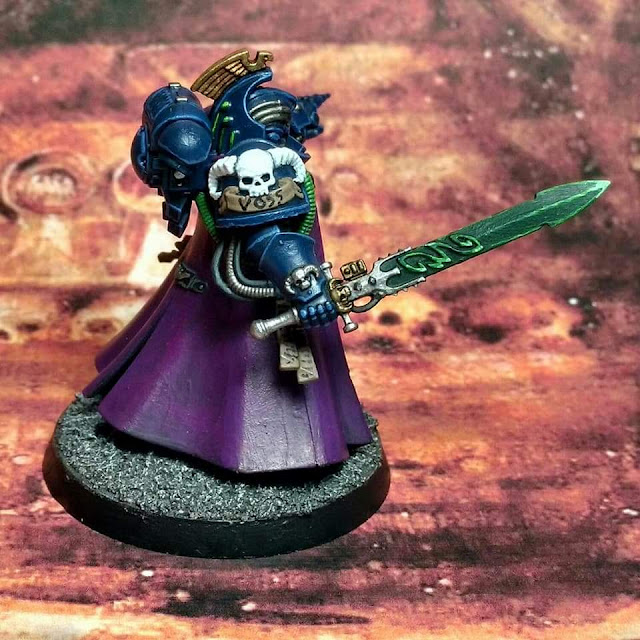 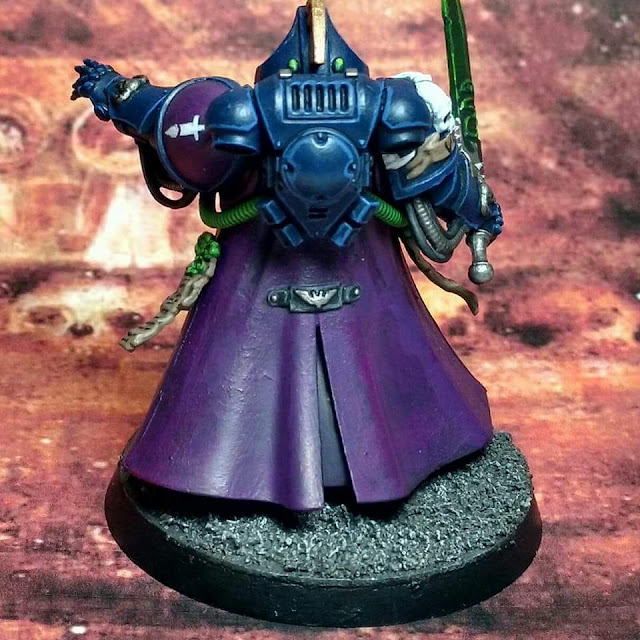 Specialist characters can be hard to keep the chapter identity with the alternate armor colors, so I tried to convey the purple/black with the robes. I also tried to keep the blue dark as a semi-nod to the chapter's Crimson Fists inspiration. I tried to replicate the same burning sword look from my Dark Angels librarian, but the color shift to green left it looking a little odd. I think it still works though.

So that's two models down of about 60. I wouldn't expect too much movement on this project, but if I get anything else done, I'll be sure to post. It feels good to post again.

Anyways, happy gaming!
Posted by TheUndergroundLair at 1:25 AM