I'm the kind of painter that doesn't tie himself down to specific projects. I paint what I want, when I want and rely a lot on inspiration to get things done. Obviously, this gets fewer things done than some sort of crazy "ambition-based" system.

However, since hopping on the Frostgrave train back in August, I can say that I've made of progress. I find the frozen city of Felstadt to be very inspiring and therefore have popped out quite a few projects. But the one thing I have always sort of felt guilty about was not having my spellcasters painted. The wizards are what make the game what it is and the master/apprentice thing makes for some great interaction between models when choosing which figures to represent them.

Now, I've had models picked out, primed and ready to go since the beginning. I knew exactly what I wanted, the color scheme, etc. and they have been mid-paint for months. Finally, I have managed to squeeze enough ambition out of the ol' inspiration tube to slap the last few colors on these wizards. 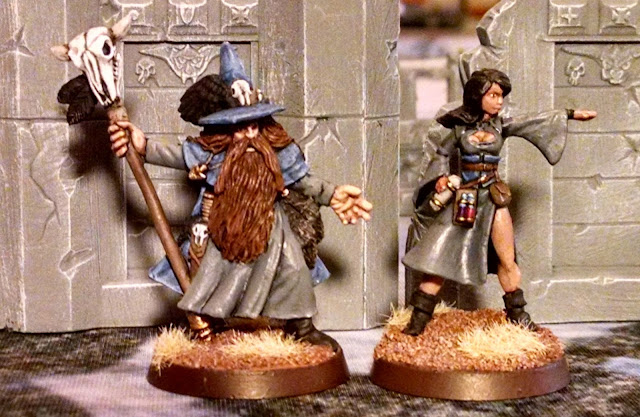 Amuron is an old Empire Grey Wizard I had snagged to use as a hired warlock in Mordheim. Warlocks didn't have cool swords, so his sword got chopped off and replaced with an open hand from the Mordheim warriors sprue. 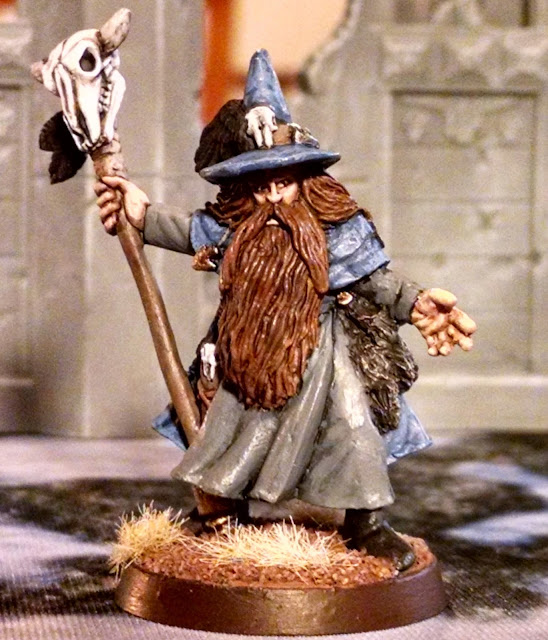 I kept the same color scheme as his brother Hadrian, or rather, this was the original inspiration for the scheme and the old templar got to wear it first. I was aiming for a natural, Gandalf the Grey kind of look with lots of neutral tones. 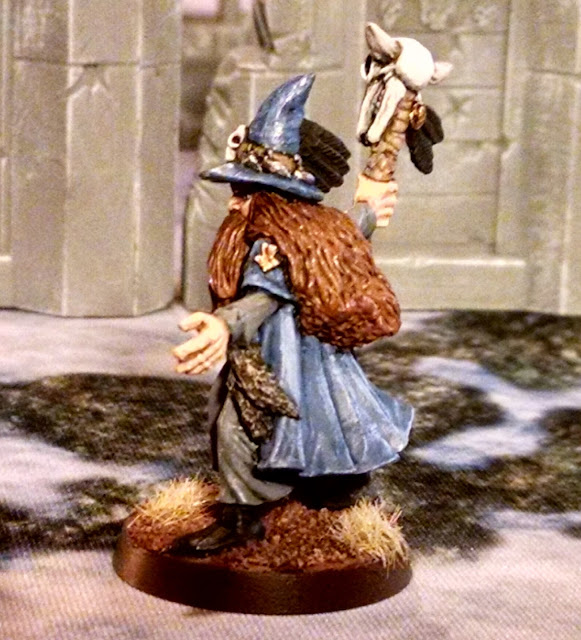 I see Amuron as the kind of enchanter that works with natural spirits, so I kept his talismans with natural bone and leather looks, with a few picked out in gold or sliver to stay earthy. The feathers are painted as raven feathers, a nod to Grey Wizards and Odin in some respects. Amuron is a wandering wizard of the natural world, not so much a shaman, but channeling the natural energies of magic instead of calling on demon summoning and black arts. 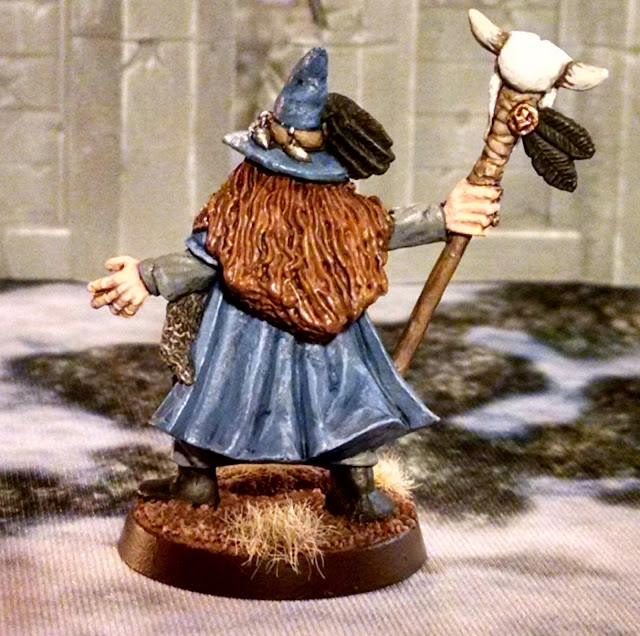 I also left his beard and hair brown because I wanted to stay away from the archetype of the old wizard. Amuron is the younger brother, impetuous, quick to anger but also quick to forget, and always willing to help those in need. He is youthful in spirit if not actually young and has enough age to have wisdom to go along with his power.

Elizabelle is a Reaper Bones mini, and honestly I can say she is not some of my best work. I will also apologize for the awful photos, since she is so thin the camera doesn't recognize her as a focal point. Girl needs a few sammiches. 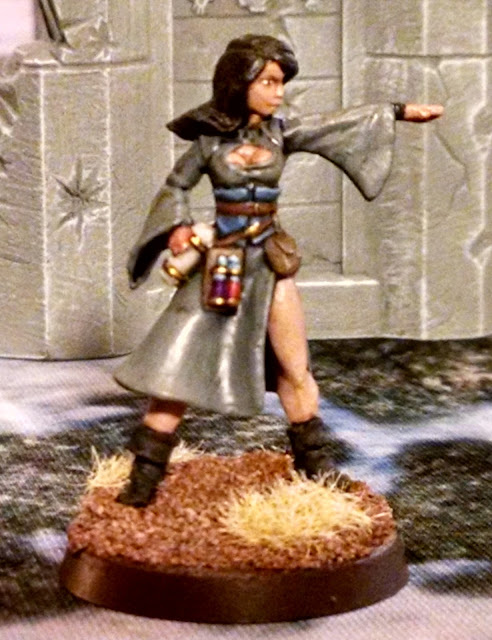 I really liked her model at first but was really disappointed after priming and beginning painting. The model's features are very soft, her hands have no detail and there are a few miscast bits. Having invested some energy into her before finding the flaws, I decided to work them into the backstory. 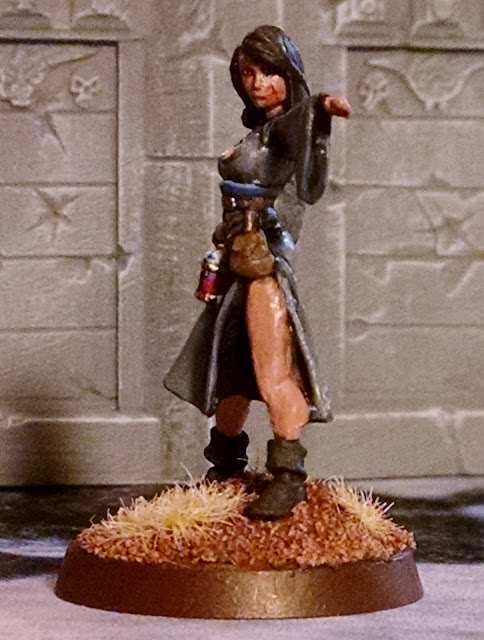 As you can see there is a large flaw in her face. Elizabelle was attacked and burned by bandits when she was just a farm girl, saved from a crueller fate by Amuron's timely appearance. Her scars were permanent and her father cast her out, leaving Amuron to take her in as an apprentice. Elizabelle is studious, curious and strong-willed (much like her master) and her experiences have made her a tad hard. But she is eager to make her master proud and wants nothing more than to follow in Amuron's footsteps as a wandering hero-wizard. 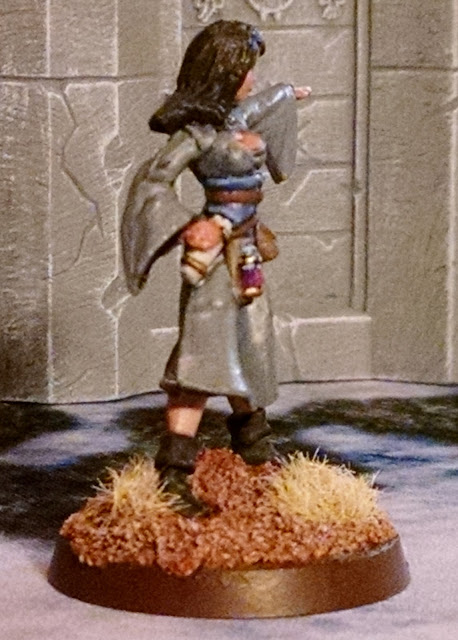 Honestly, I rather rushed poor Elizabelle because of how unhappy I am with the sculpt. I may someday upgrade her with a nice Hasslefree mini, but for now she'll fill the role of apprentice nicely. It may be that I will grow ever fonder of her and won't be able to part with her in the end.

Now that the wizards are finished, I feel a lot happier with where I am with the warband. Not gonna lie, the average soldiers are gonna take a long time. Great figures though they are, there are still five of them and they are nowhere near as interesting. I'll get there eventually though.

For now I will leave you with a new "family portrait" of my painted figures so far: 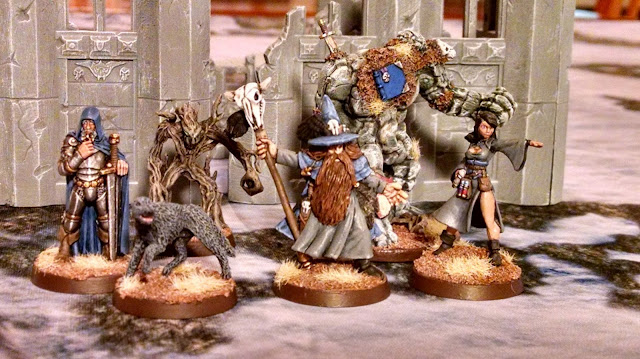 Happy gaming and stay frosty!
Posted by TheUndergroundLair at 3:47 PM