I know I'm a little late, but happy Independence Day! Or I suppose if you're British you would call it Treason Day. But I'm not British, so I spent my weekend eating awesome food and watching explosions. Why? 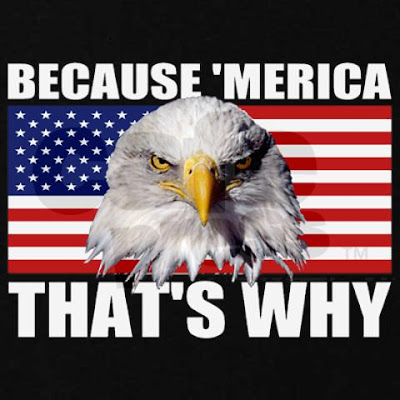 Actually all that stuff was kind of just a sideshow for me because I spent most of my time finishing up a little project that was more than appropriately timed.

A couple weeks ago, something just short of a miracle happened. My wife showed interest in space marines. Or rather, I was looking at some space marine color schemes and she happened to see some Crimson Fists and said "Those guys look cool, you should paint me one like that." I asked her why she liked them and she said she liked the red and blue, and they reminded her of Captain America. Since she is a little bit of an ol' Cap fan, I decided to do one better. A few ordered parts and a rummage through the bitz box and I came up with this fellow: 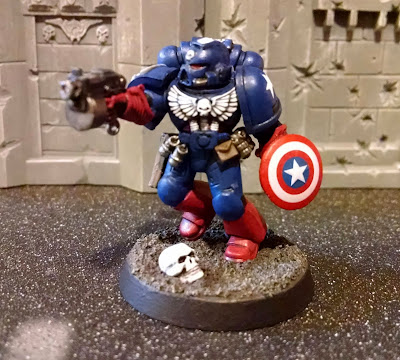 Yep, that's a Captain America marine. I'm really pleased with the result. The shield came off a HeroClix figure and even though it's a little small, I feel it fits and doesn't overpower the whole model. I even left it with the original WizKids paint job because it looks good and I had no ambition to paint concentric circles. 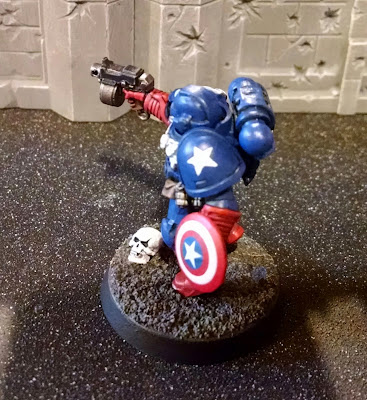 I'm also really happy with the freehand star on the shoulder pad. It's the first real freehand I've done in a while so it was nice to see I still had it in  me. 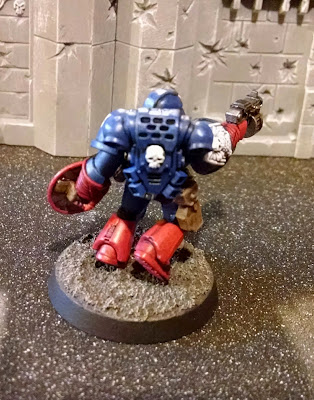 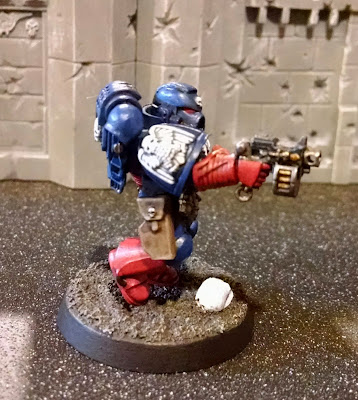 The wife is also really happy with him, and since he's "technically" hers, that's all that really matters. I'm slowly trying to convince her that he would be good for beating me in 40k and have been hinting at having some "extra" space marines lying around she could use too, but so far she's not biting.

Anyway, that's all for now! Hope everyone had a safe and fun 4th of July! Happy gaming!
Posted by TheUndergroundLair at 8:51 PM