Return To The Deep Dark

I decided to break out the ol' Deep Dark Dungeons rules for a crawl the other day. To sort of stretch the limits of the party, I built a nine room dungeon. That may not seem like very many rooms, but when each encounter is 33-66% of your warband value, it gets pretty taxing over the long haul.

In order to accommodate such a large dungeon, I turned to the swathes of D&D dungeon tiles I've accumulated over the years. This is what I came up with: 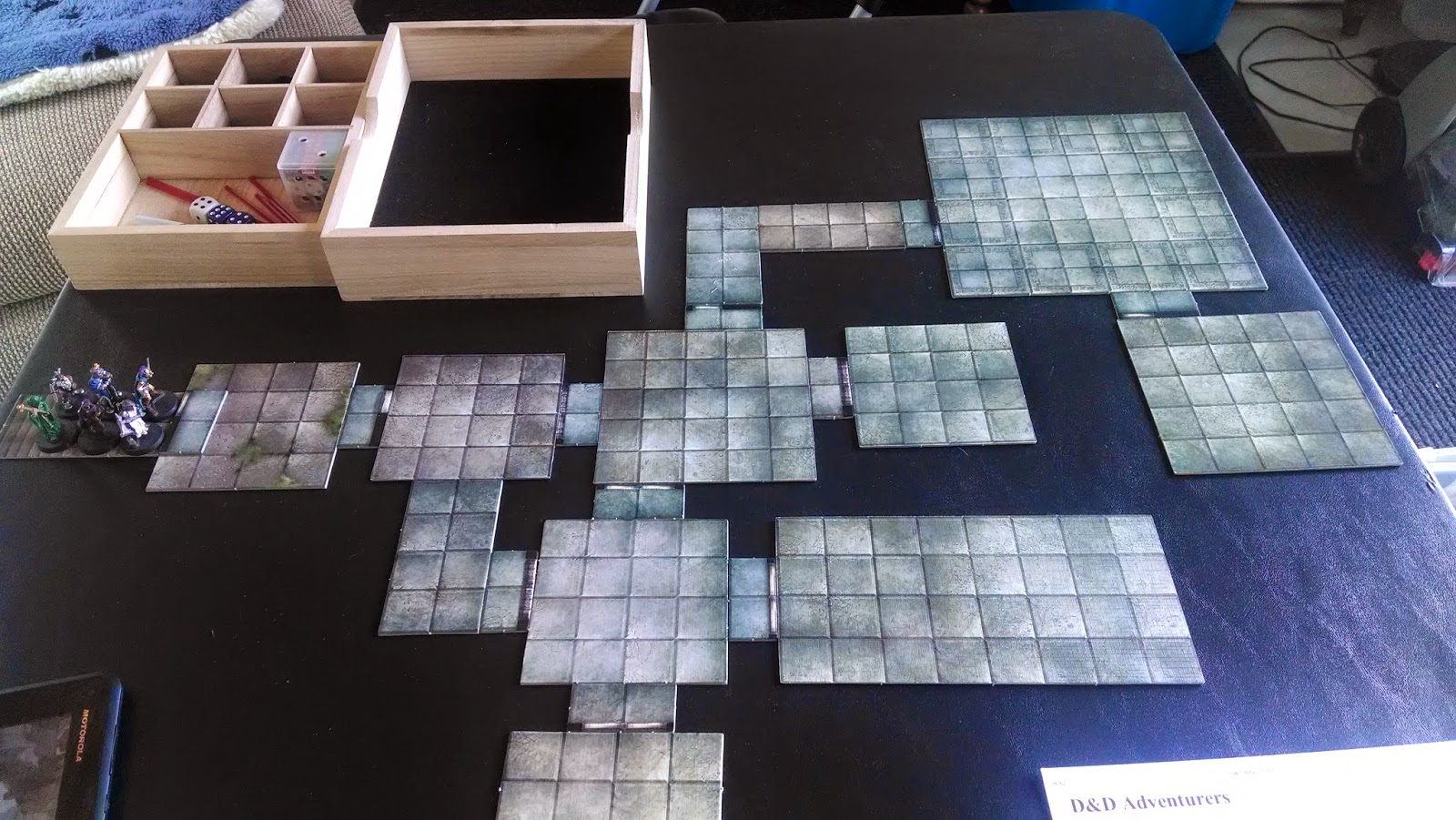 Pretty basic in the grand scheme of things, but a lot of deadliness belies it's simplicity...

I sent my usual party of dungeon adventurers down into the dark, and they were greeted at the bottom of the stairs by a single guard. 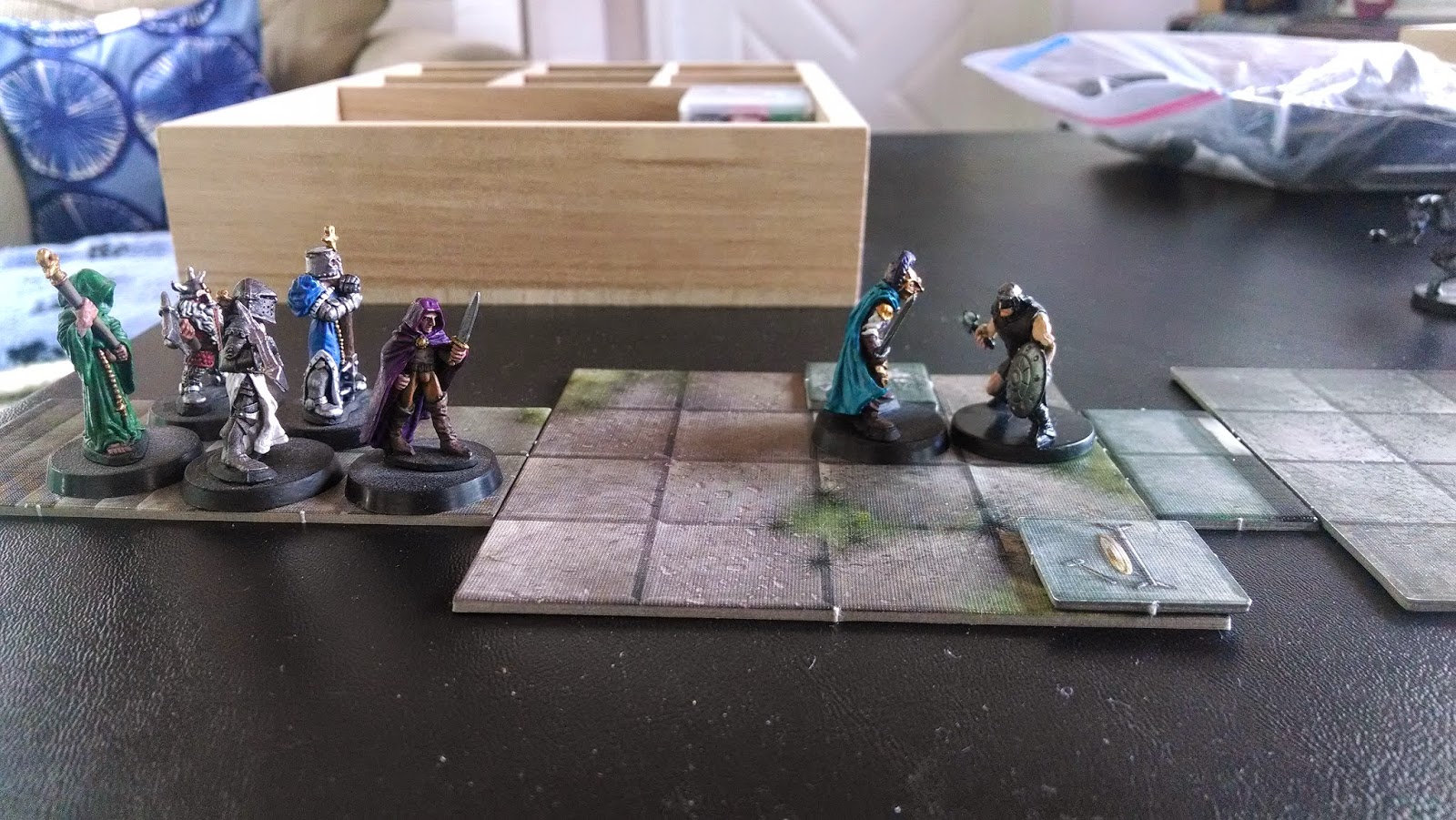 The elf ranger surged forward and planted his blade in the man's belly, but the guard only grinned as he shifted into a horrifying werewolf! 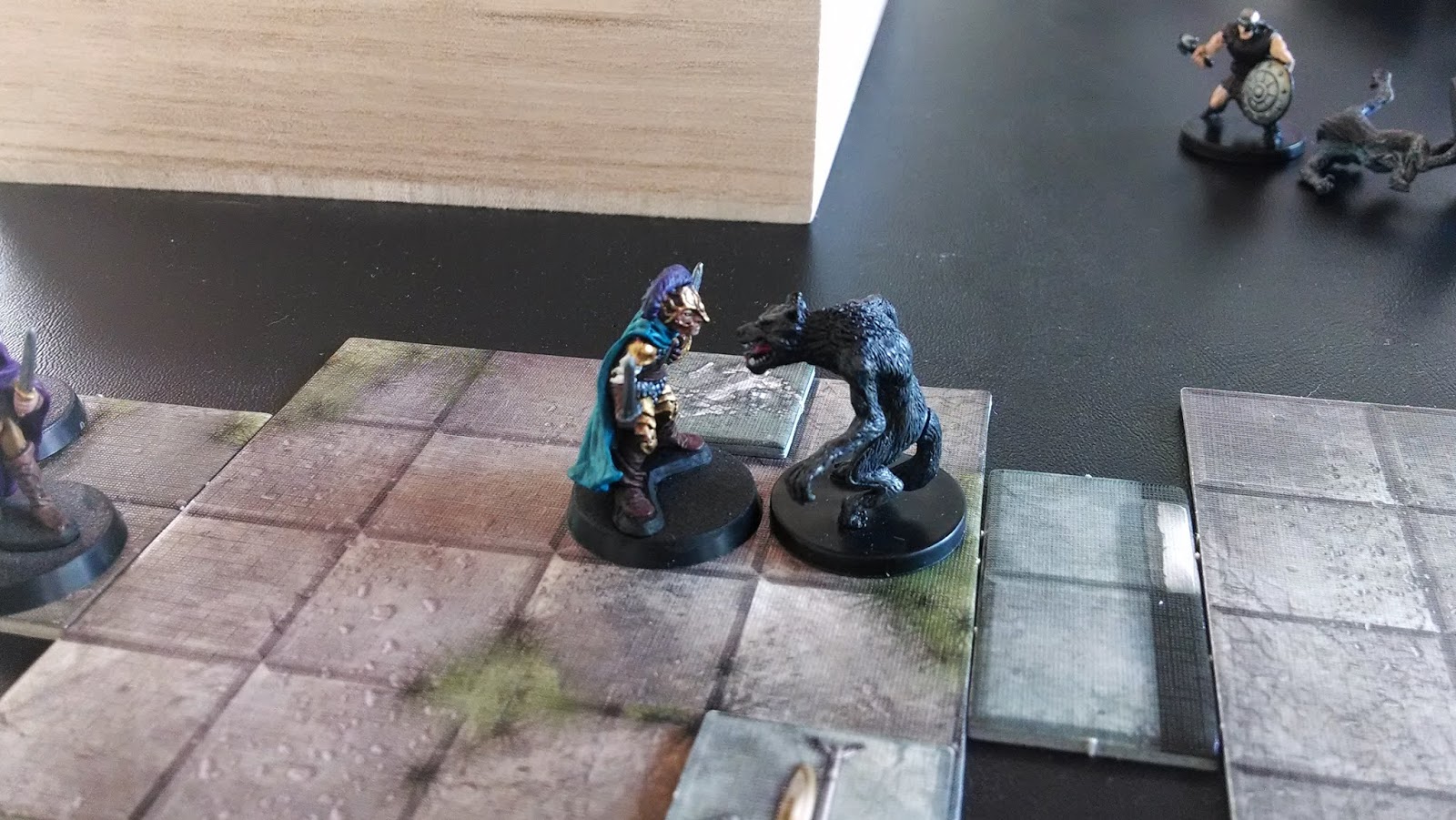 The heroes quickly overcame their terror and swarmed the beast, bringing it low through a series of repeated beatings. 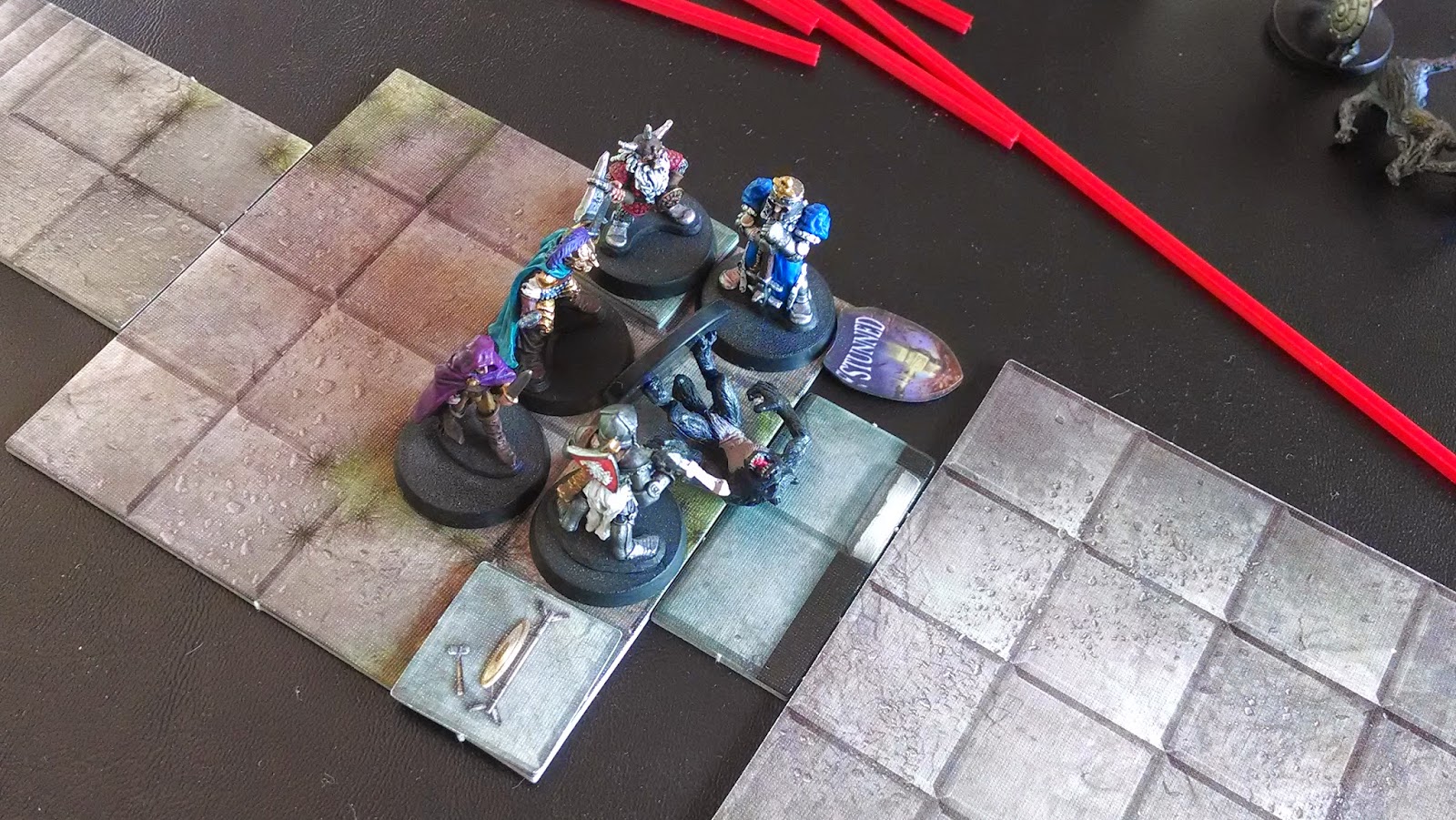 The next door encountered had a simple trap that the rogue easily disarmed. He quietly opened the door to spy a dark elf witch and her bodyguard. 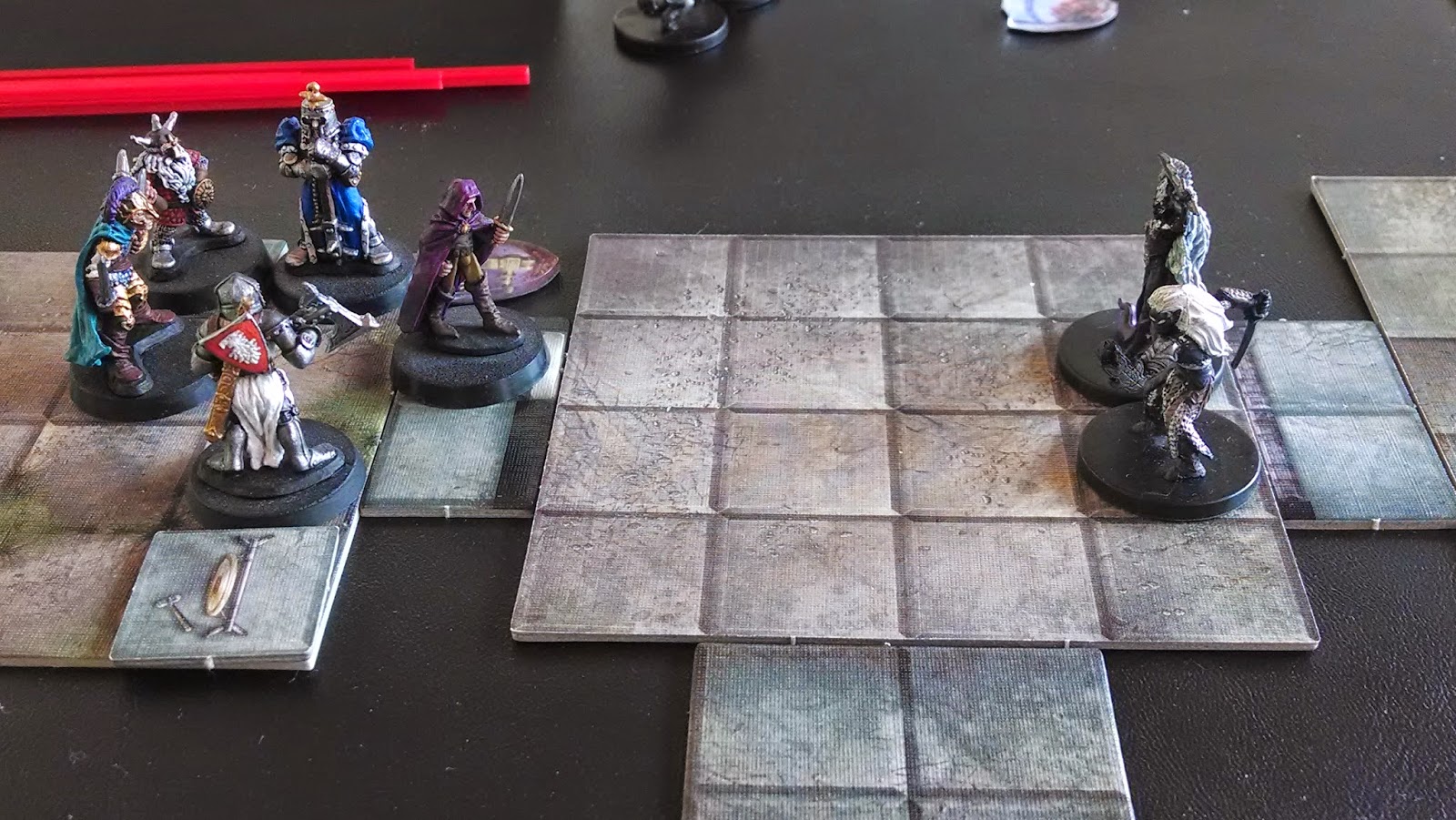 Attempting the elf ranger's trick earlier, the rogue rushed forward to try and take out the witch, but her quick reaction left the rogue bleeding on the floor. His adventures were over for sure. 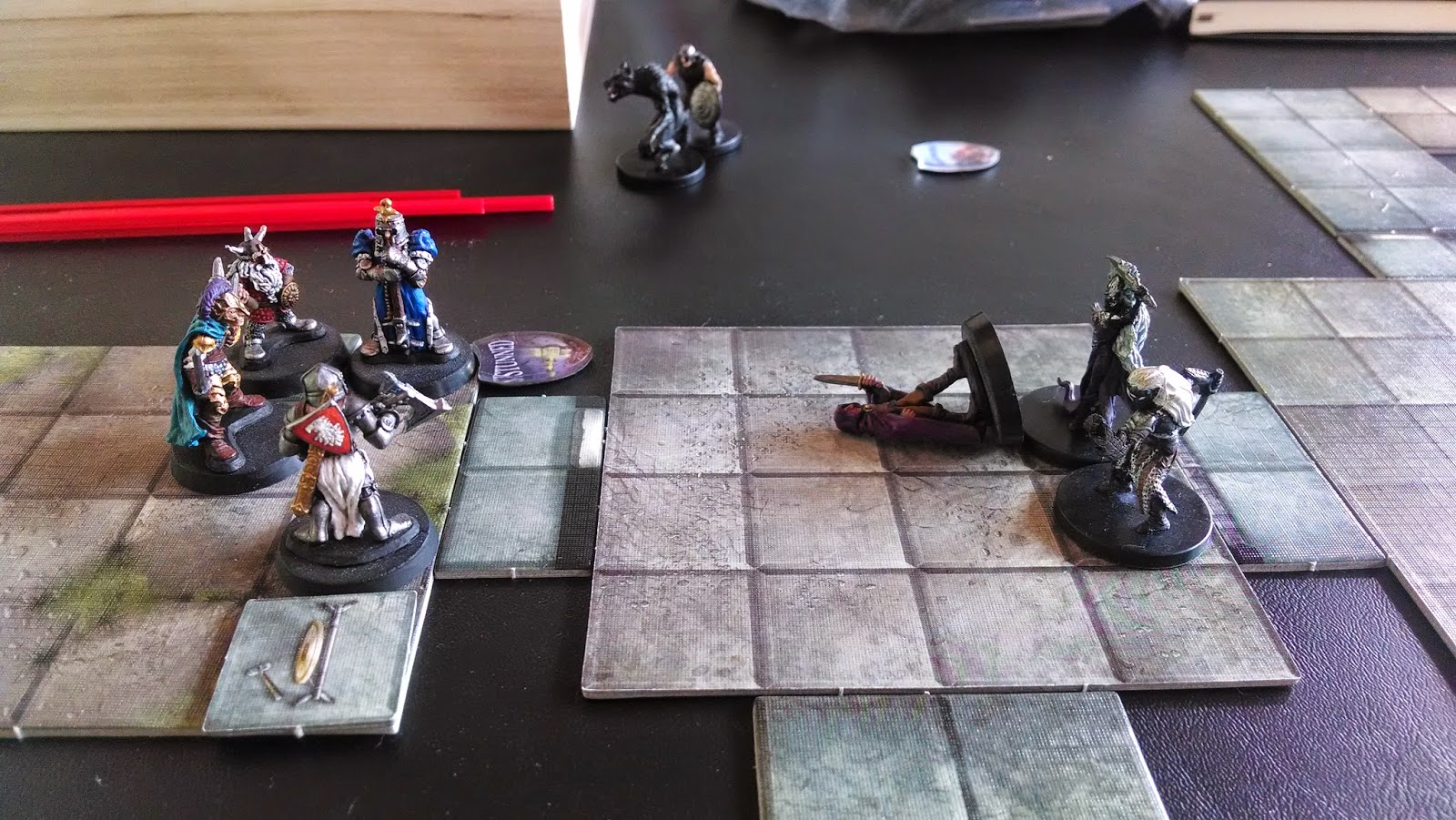 The party moved in to avenge their fallen comrade, with the paladin striking down the witch. Quailing in fear, the remaining dark elf was dispatched with ease. 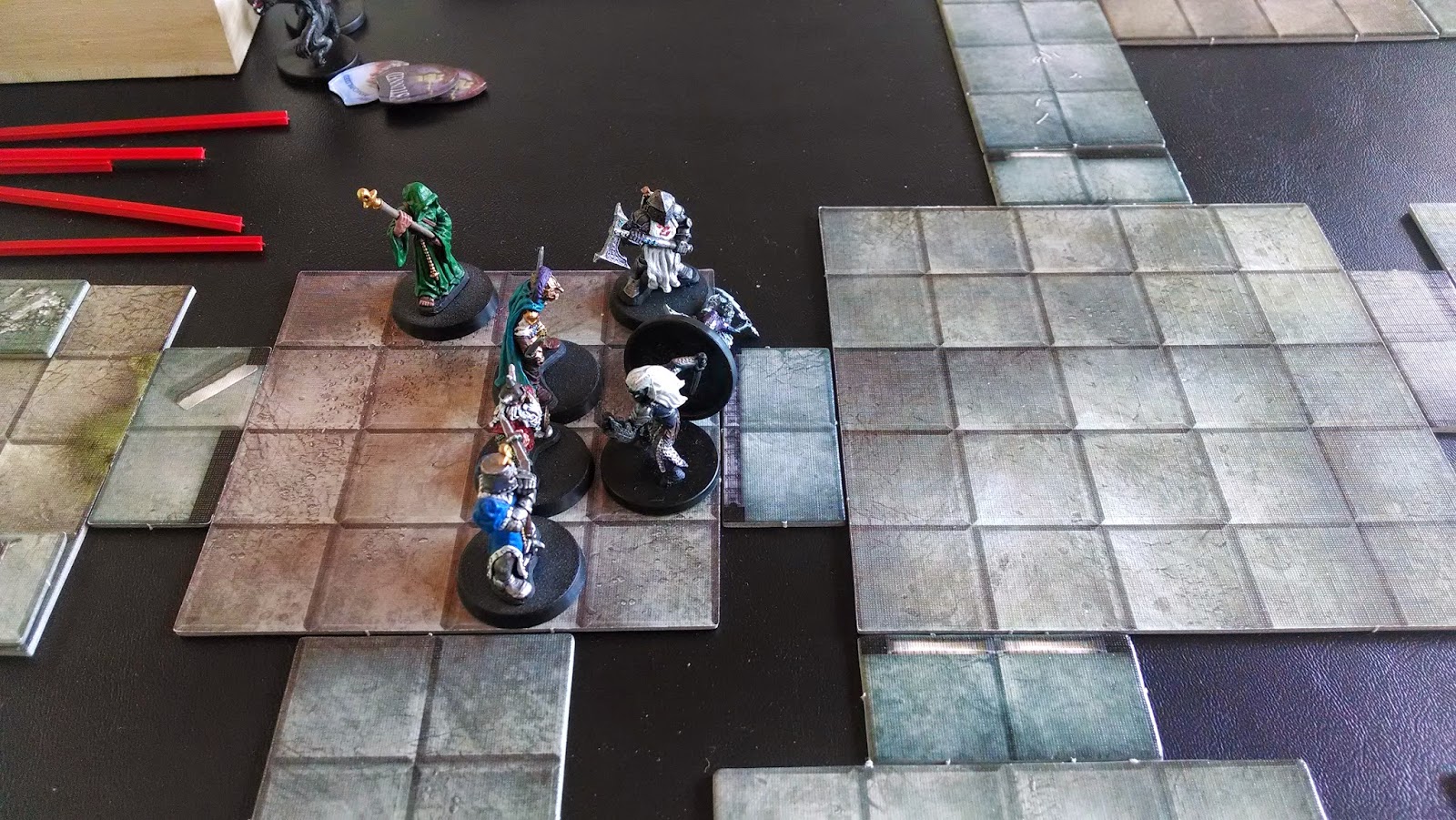 Moving to the next room revealed an ancient tomb. The dwarf fighter failed to reach it before the templar, and missed out on a magical crossbow. The templar hoped he would get a chance to use it to smite some of his hated undead foes. 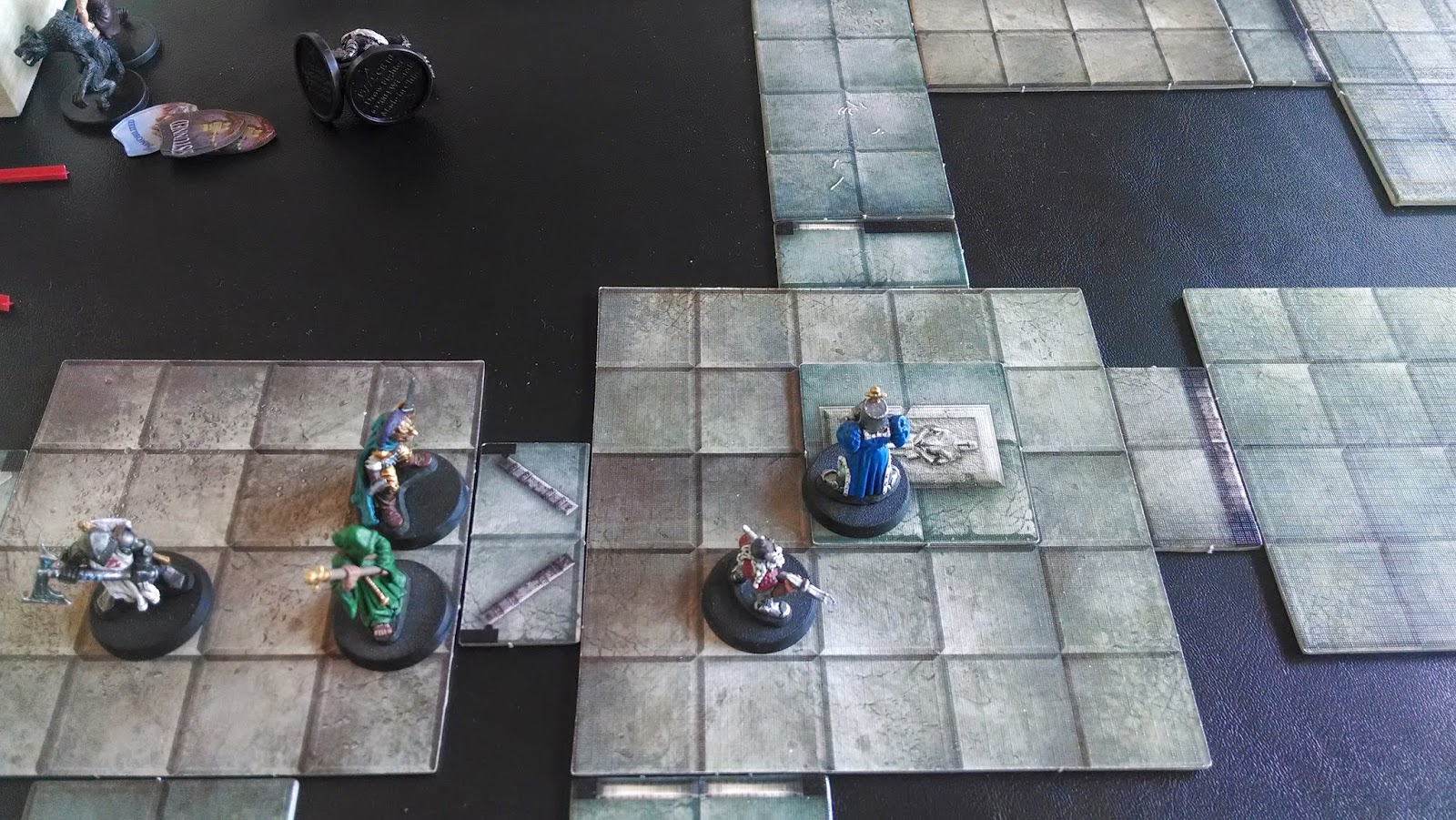 The heroes decided to head left down the corridor, with the templar taking the lead and the paladin taking rear guard. 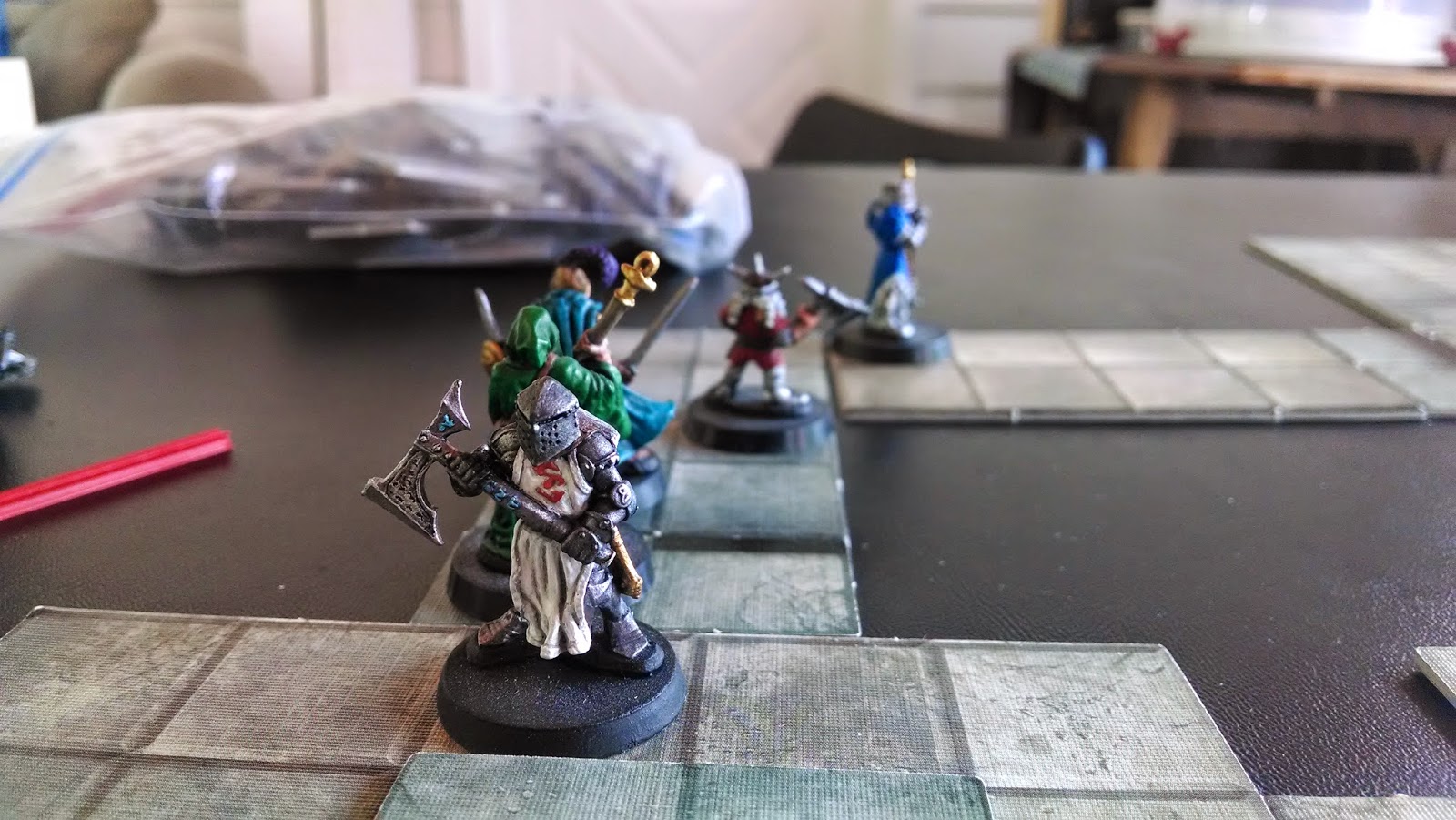 With the rogue out of commission, the ranger ended up as the scout, moving up to open the door. He got a firebolt trap for his troubles, and though this elven reflexes saved him, he was blinded by the flash. Luckily he recovered in time to see the three lizardmen waiting in the next room. 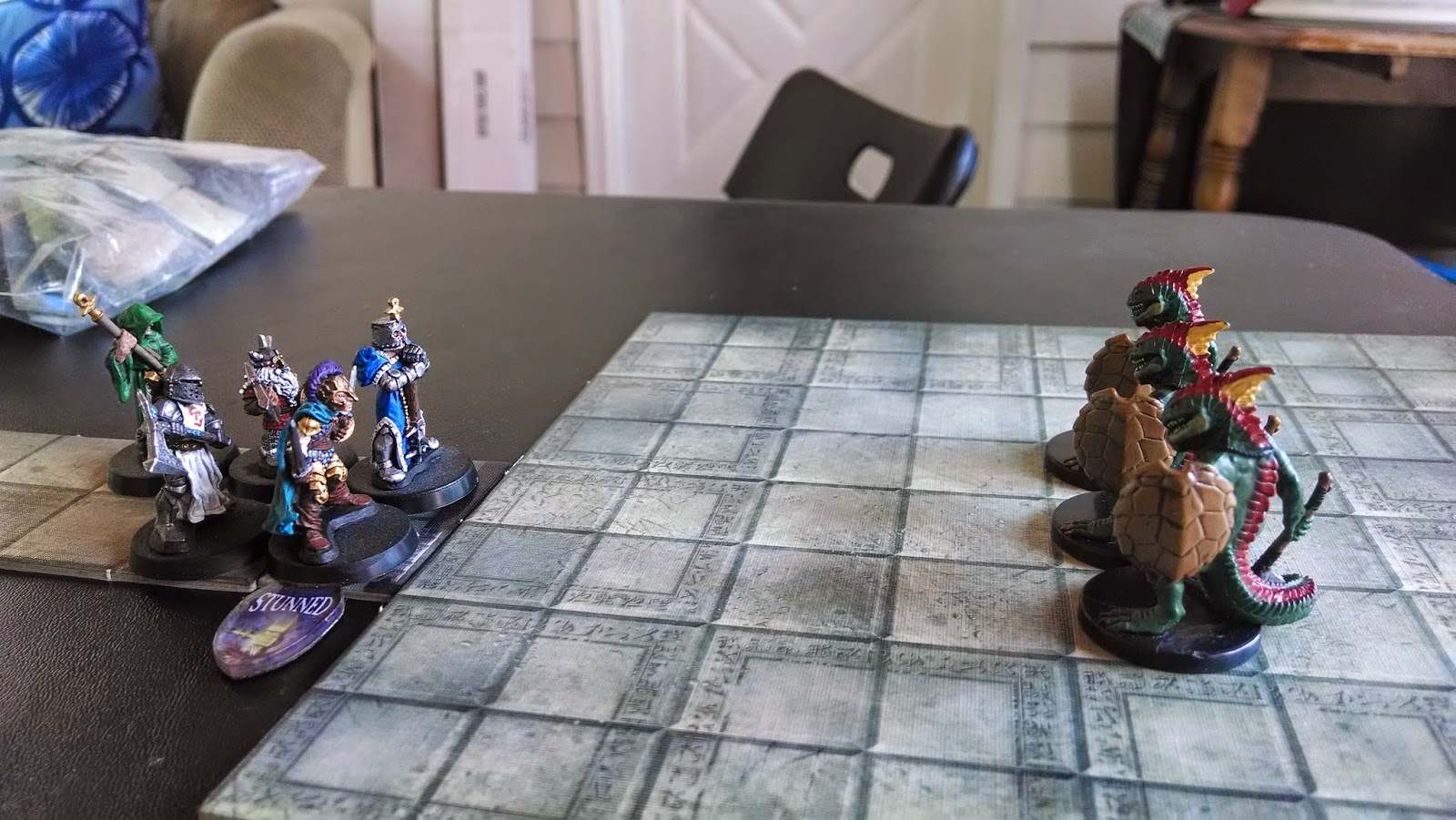 Not waiting for their dwarven companion, they heroes leaped into the room. This proved foolhardy, for even thought they slew one monster, the paladin was struck down. The other two reptilian foes were ensorcelled by the half-elf wizard and brought low in record time. 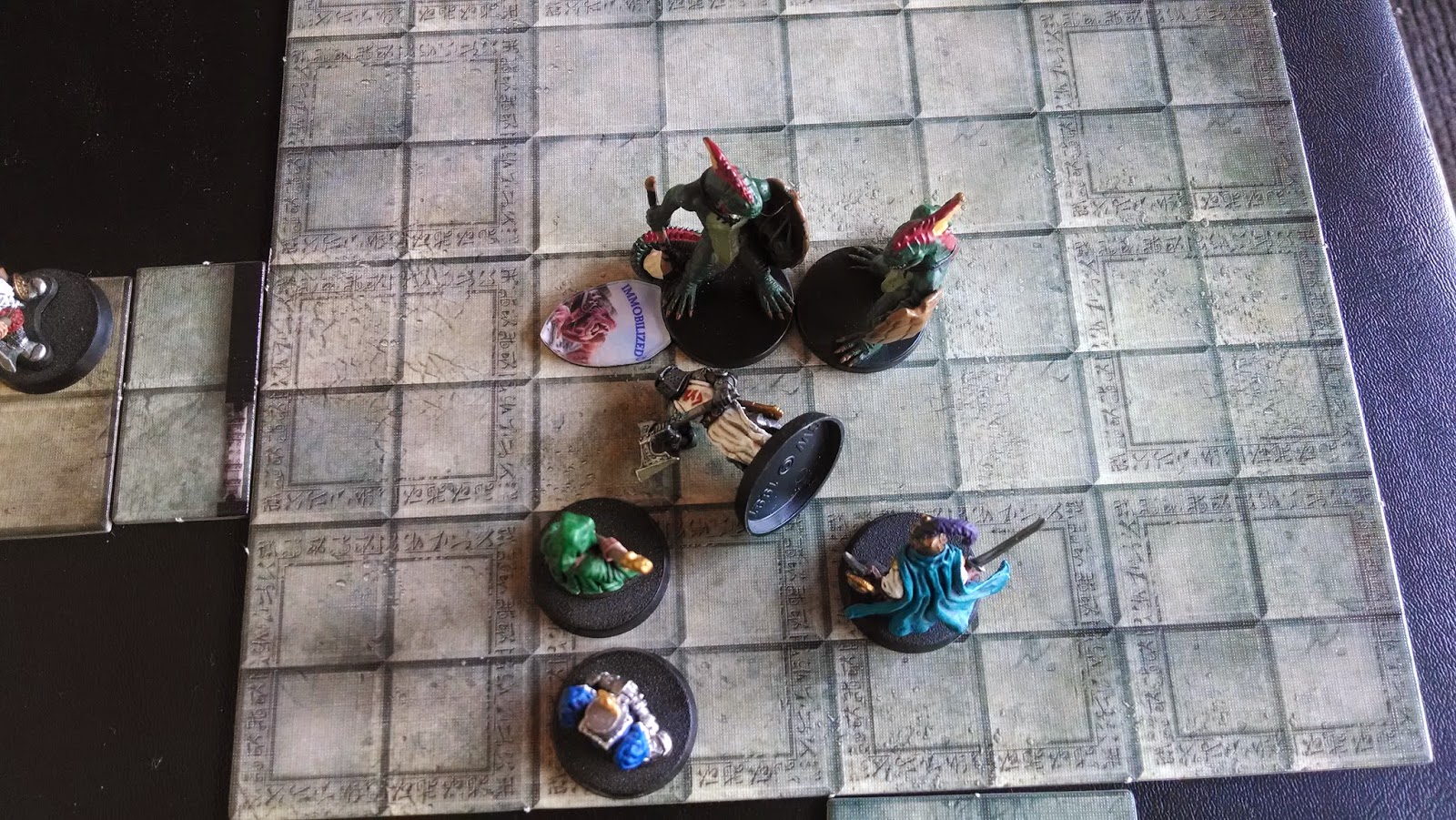 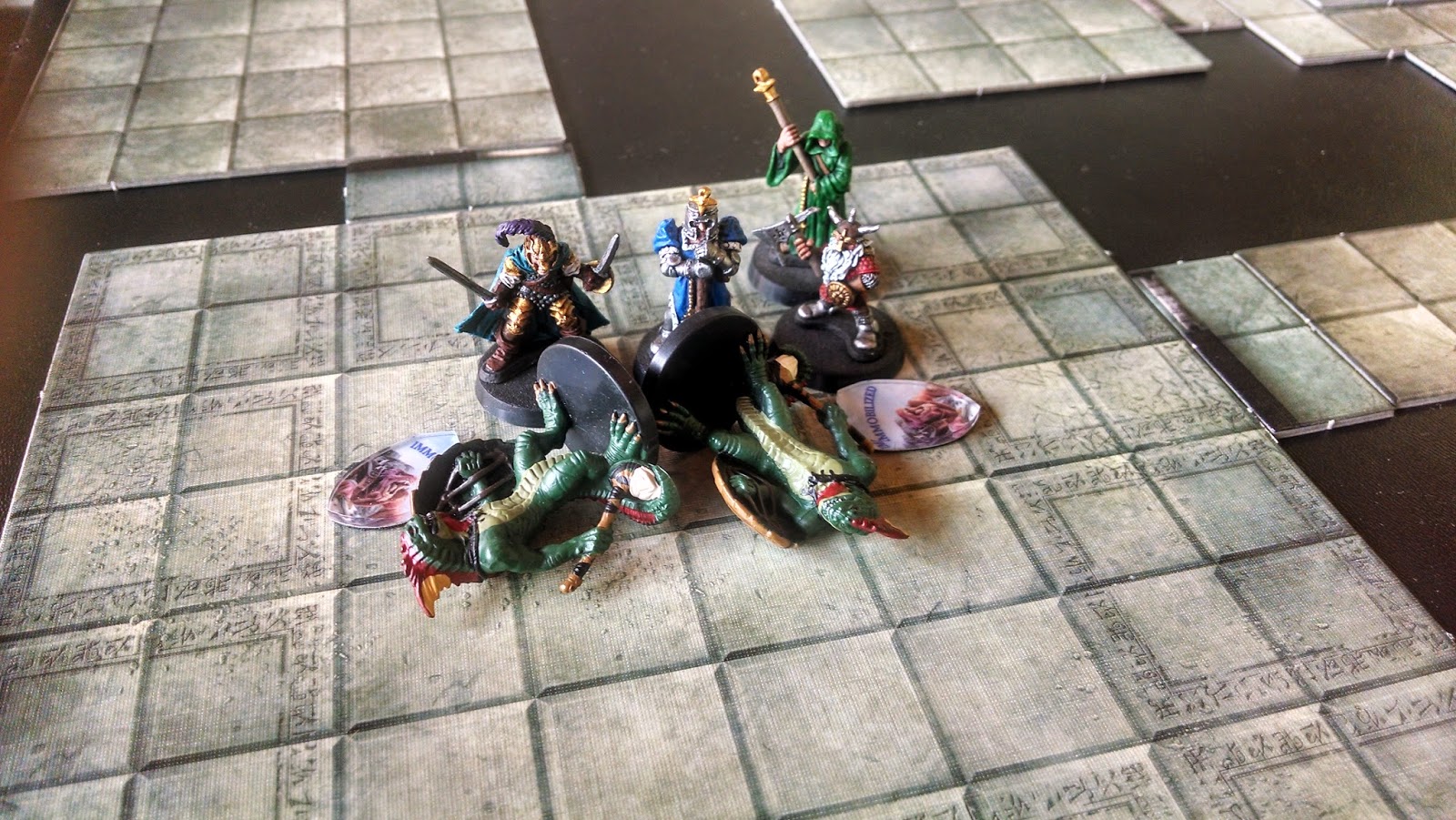 The last room in this pathway also had a trapped door, but it was harmlessly tripped. For all that trouble, the bookcase within contained nothing of value and the heroes trudged back the way they came, disappointed. 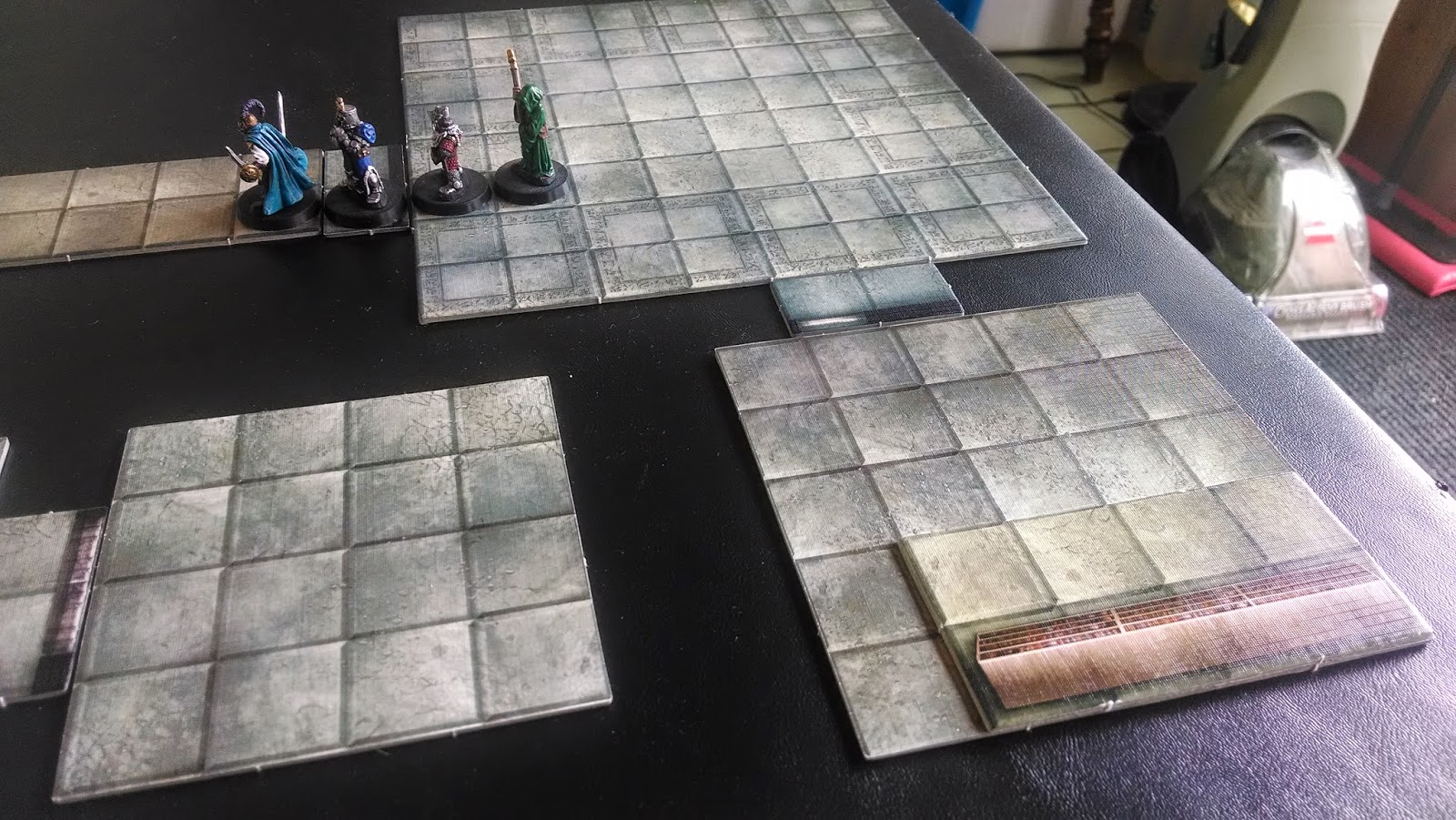 A little side room contained a weapon case surrounded by three statues. The adventurers weren't completely surprised when they lurched into life and started to attack. 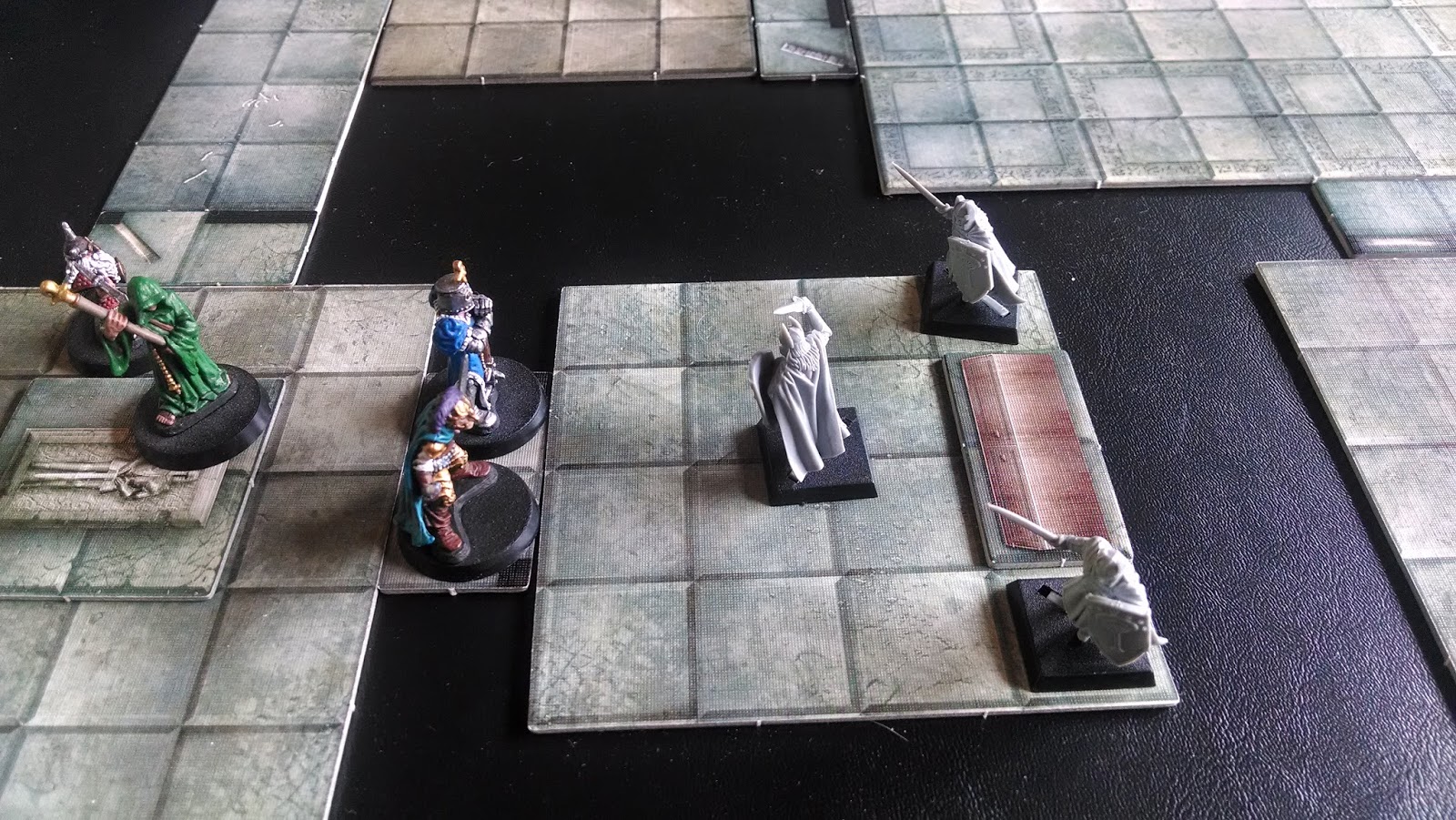 What was surprising, however, was when the elf ranger was crushed under a heavy stone blade. The templar tried to use his new crossbow, but between trying not to hit his dwarven friend and the hard stone he had to resort to using his mace. The wizard climbed up on the tomb to get a better vantage point for his spells. 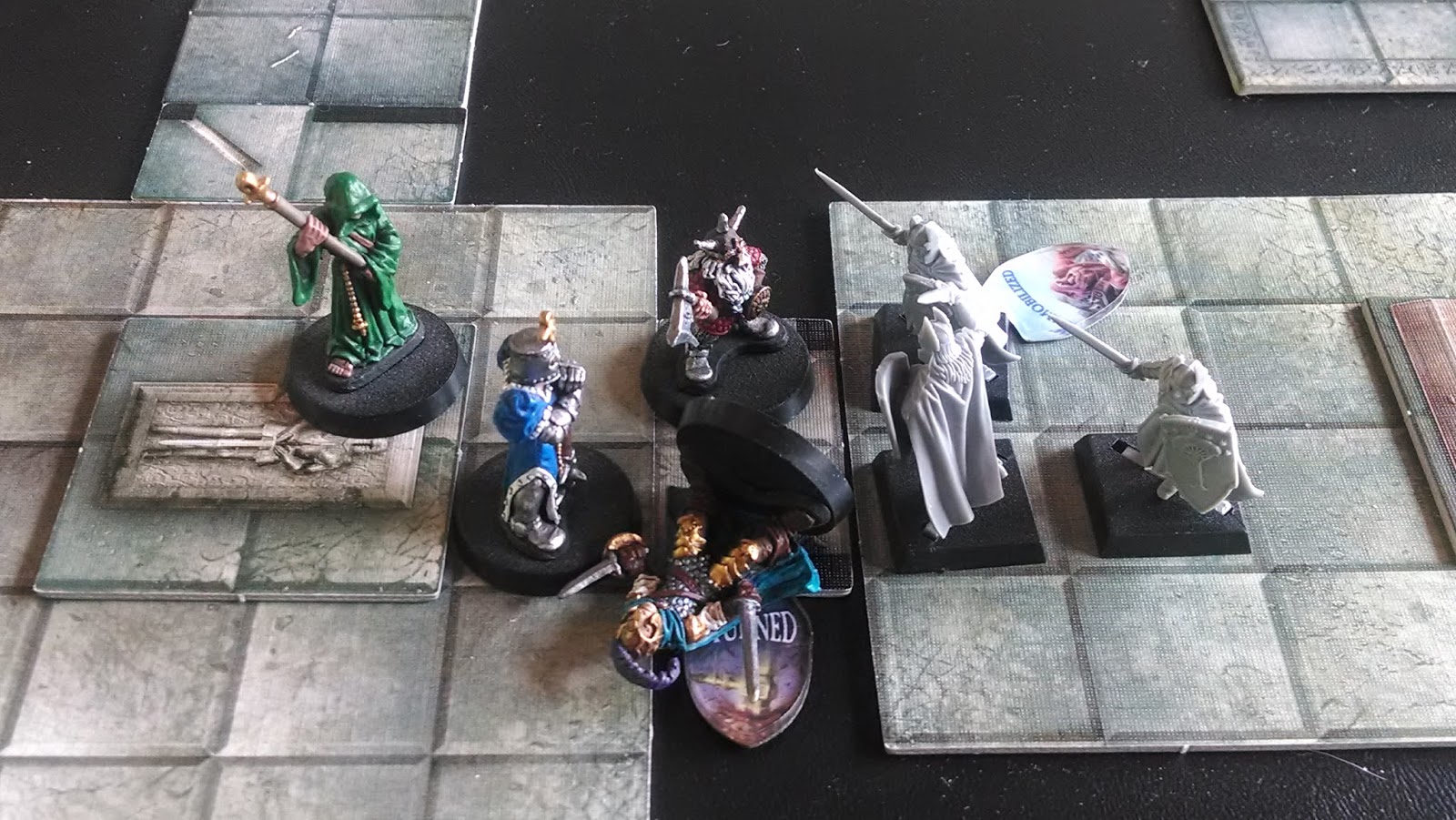 The wizard's spells proved invaluable and the statues were soon turned to dust. The dwarf opened the case and found why such powerful guardians were installed. The case contained an axe of masterwork quality, which the dwarf kept, and a magic mace that was passed on to the templar to improve his fighting skills. 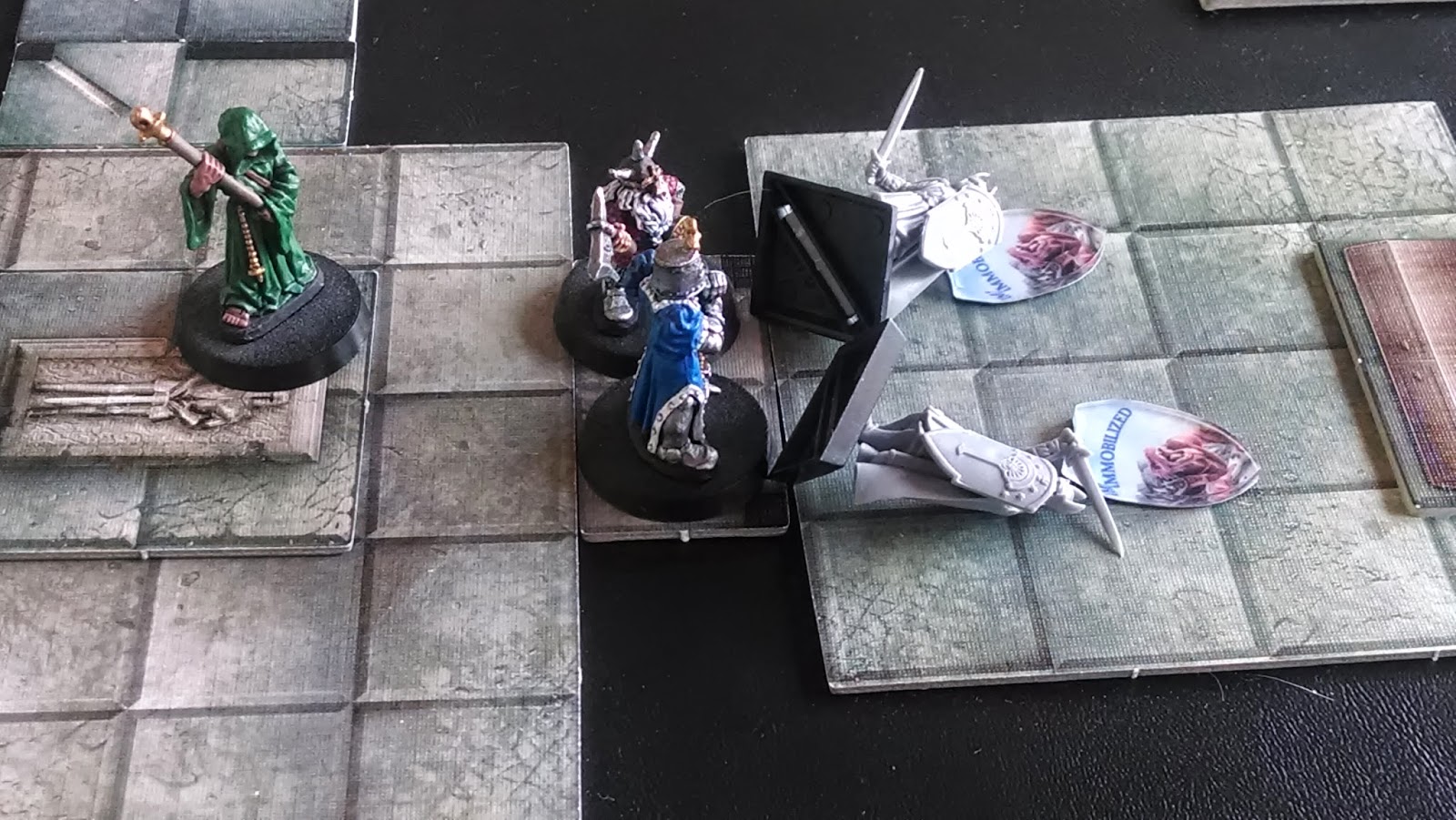 Moving on to the next room, the adventurers opened the door to find a hideous, scaly creature with a tentacled face standing over a torture rack. The rack held a corpse, the skull of which had been opened and the brain removed. From the blood on the creature's tentacles, it was clear where the brain had gone... 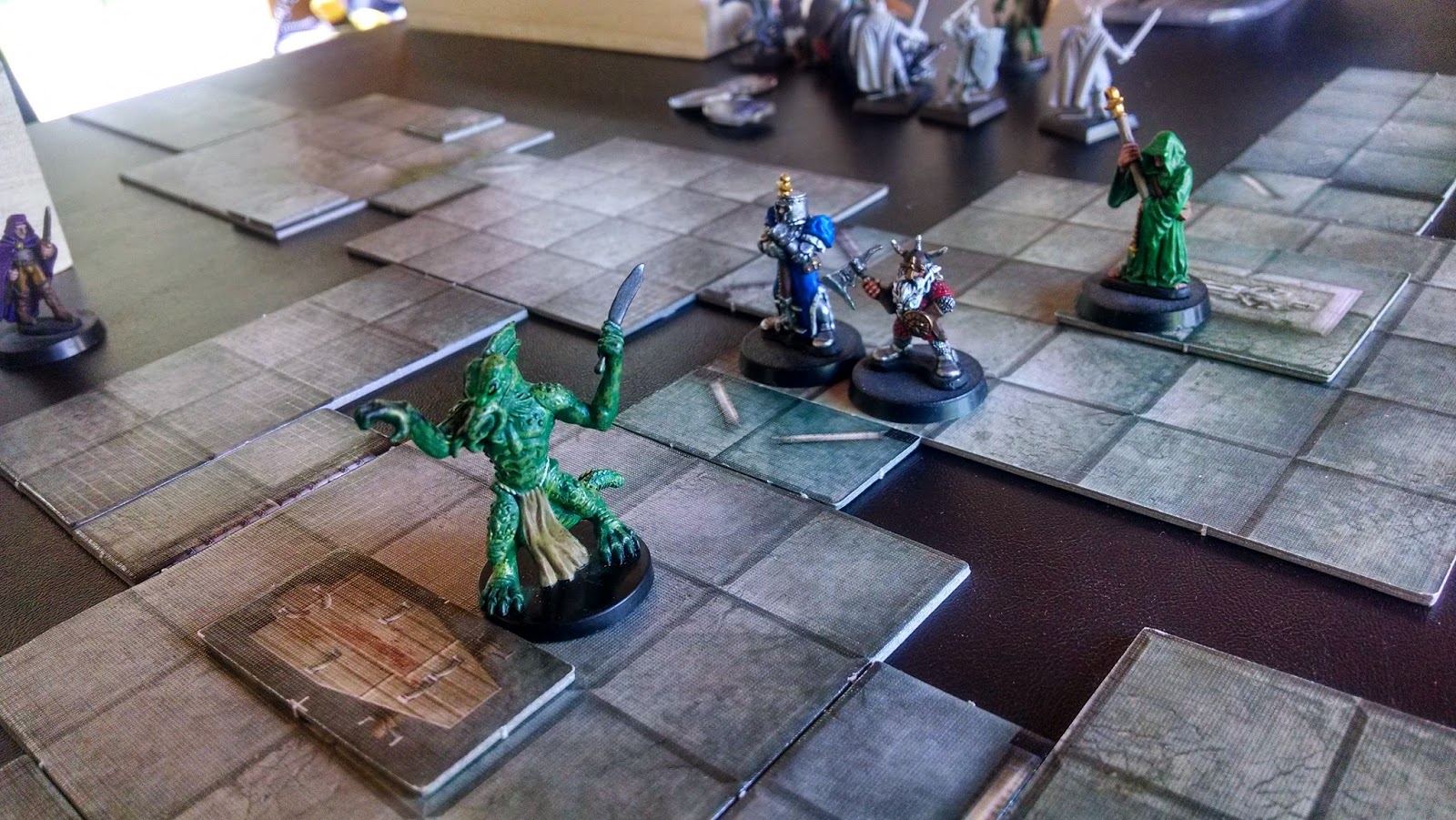 Enraged at the unholy sight, the templar charged in, followed by the dwarf as the wizard held back. The creature spun wildly and lashed out with its knife, felling the templar, but it was hacked to pieces by the dwarf. Recovering the magic mace and crossbow, the pair grimly moved on. 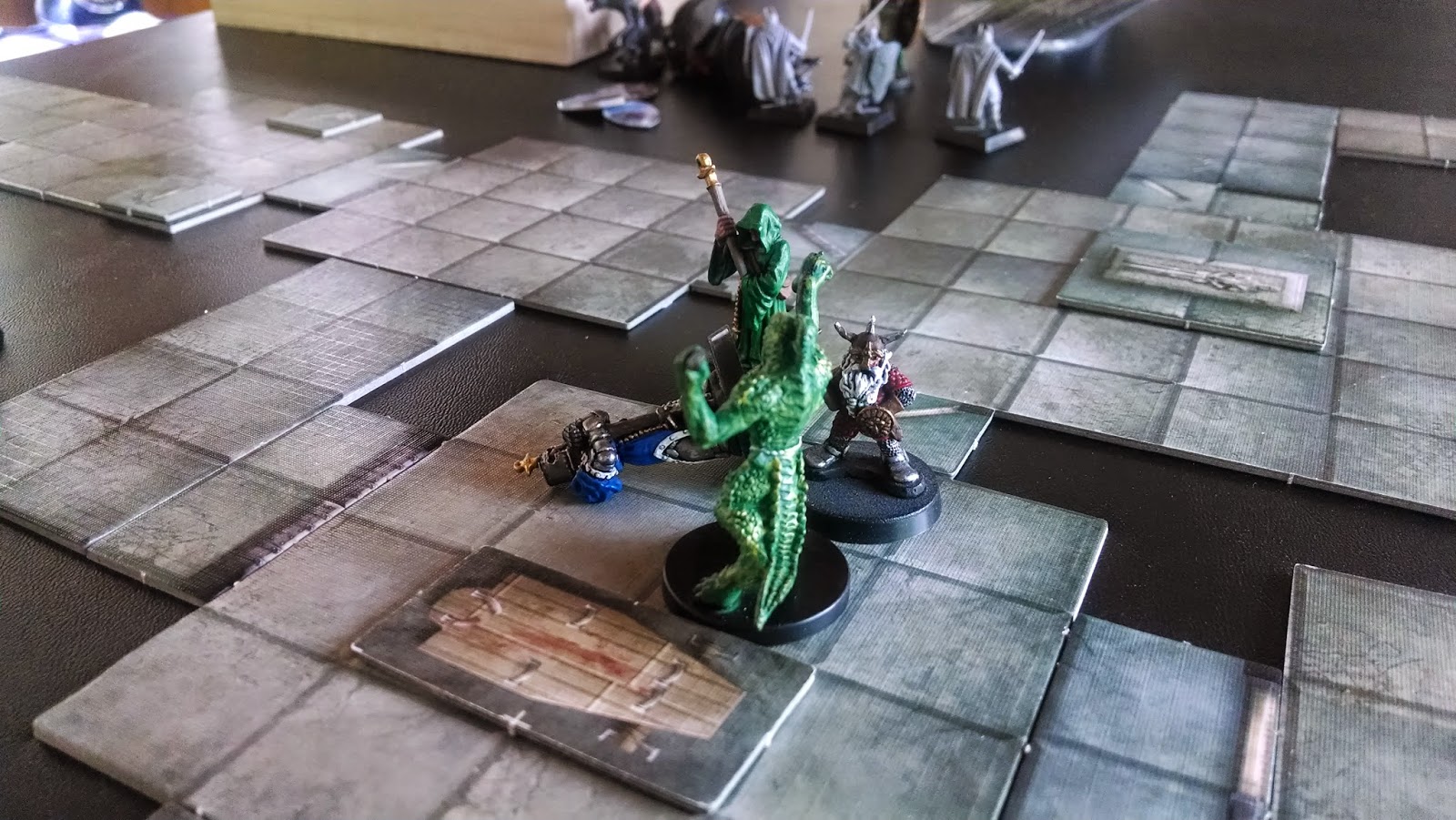 The next room had a blade trap on the door that was no match for dwarven armor. As they entered the room, a humongous bat dropped down and attacked but was brained with a magic mace shortly thereafter. 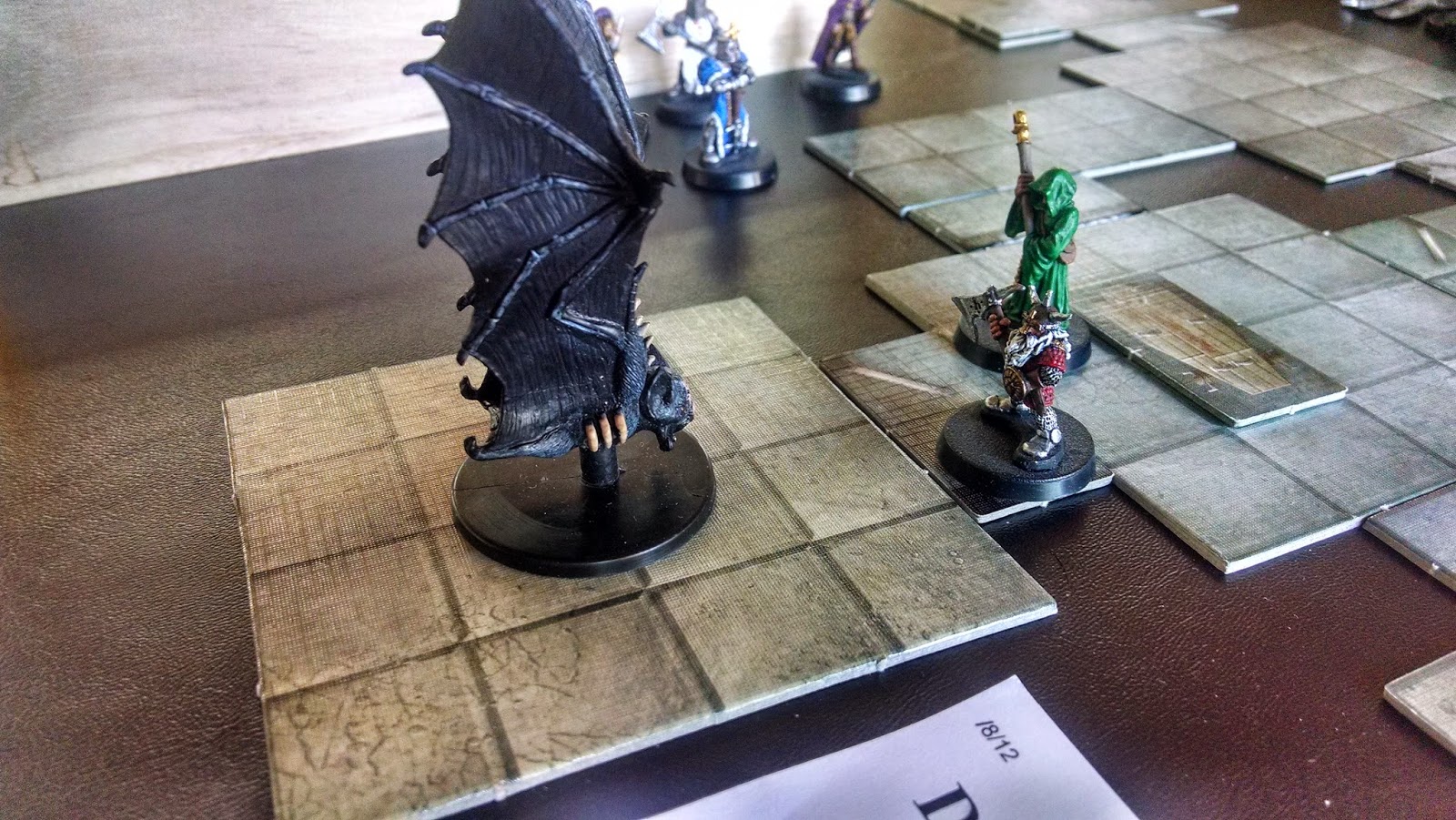 Finally the last room! Opening the last door revealed the remains of an ancient wizard flanked by armored skeletal warriors. Unfortunately these animated as the door swung open. The undead wizard, obviously a lich, pronounced some curses in ancient dead language and its guardians lurched forth. 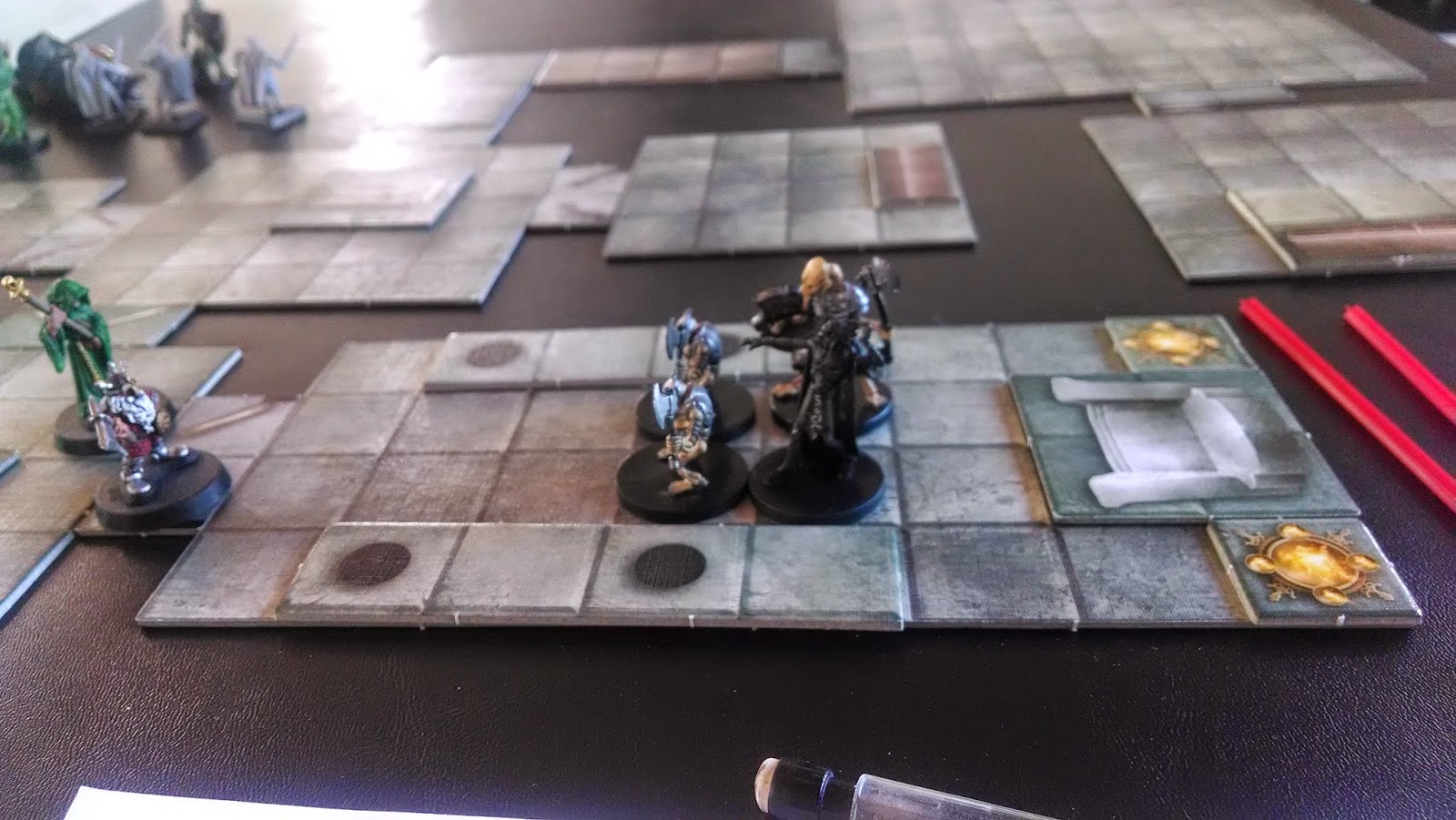 The dwarf used the narrow door to limit the fight to just two guardians at a time and keep out of the lich's line of sight. The half-elf wizard rained spells down on the skeletons, letting the dwarf smash them to dust at his leisure. 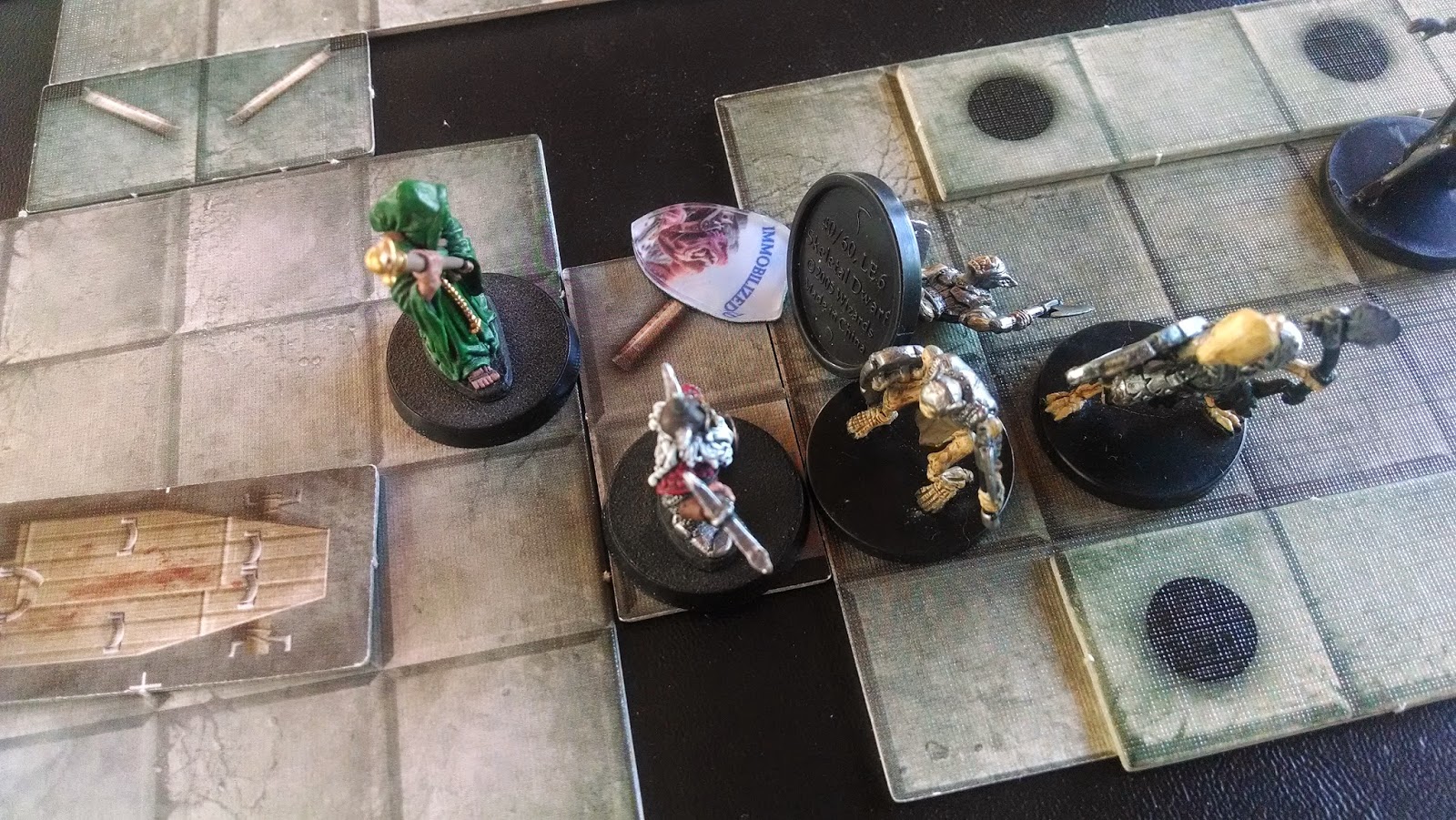 The lich attempted to retreat to a safe distance, but a surprisingly speedy dwarf chased him down. Being no warrior, the lich as reduced to a pile of robes and bones in seconds. A little magical support from the wizard didn't hurt. 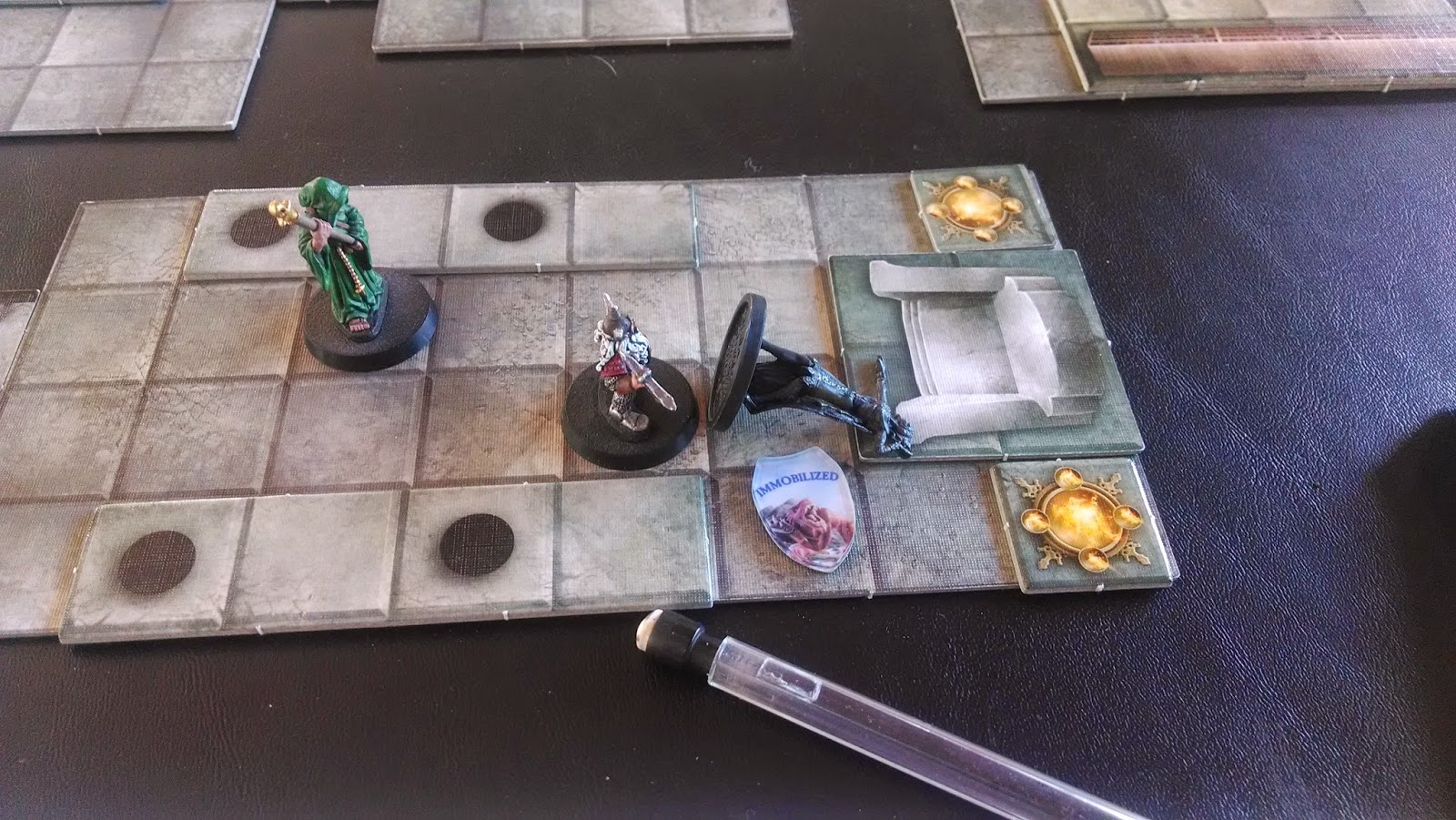 Whew, that was a marathon! Large dungeons with lots of encounters are deadly. After the adventure, everyone recovered but the rogue, requiring a resurrection spell  bought from the gold gathered in the dungeon. The paladin was wounded, but a healing potion from a previous adventured cleared that up. All in all they ended up with a net 315 gold, a magic mace (given to the rogue to help in him not dying again), a masterwork axe (given to the paladin for the same reason) and a crossbow of lightning speed (given to the ranger to take advantage of his 2+ quality).

I learned a few new things and I will be making some edits to my rules at some point. Each game is a new experience and I'm always finding something I'm not happy with. Deep Dark Dungeons 2.0 gets closer with every game.

That's all for now! Happy gaming!
Posted by TheUndergroundLair at 11:58 AM