The Cryx Of The Situation

Back in the Dark Times, when Games Workshop (TM) stalked the land and Space Marines (TM) ruled the earth, I heard of a nascent game where wizards and mechanical monsters smashed each other in the face repeatedly while spewing steam and hemorrhaging gears. This sounded like seven kinds of awesome, so I researched it a bit and found out all about WarMachine.

I managed to convince my cousin that he should play too, so we set about choosing factions. He (being a dwarf player) chose the faction with the most magnificent beards and heaviest armor, therefore purchasing a Khador battlebox. I initially leaned toward Cygnar, but felt like it was too Red-Vs.-Blue and the 'jacks too similar to Khador in most ways. Menoth was a little to fanatical and ornate, plus I hated painting white. That only left Cryx.

I was immediately hooked on the idea of battle robots made of bone and metal, with the addition of steampunk necromancy for shambling hordes of undead. I also liked the idea of a finesse army among all the hulking metal stomping around.

We had fun playing battles with our battleboxes, and I expanded my army with a few extra units. Ultimately, though, there wasn't much of a community at the height of our interest and Warhammer 40k was still king in our hearts and it fell by the wayside. I stopped playing altogether around the time Hordes came out, which I was less interested in because the monsters were flesh instead of metal.

Well, a few days ago I dug out my old Cryx models and resigned to get back into the game. There is a sizable community in my area now and the new game shop in town has a a great set-up to play in. A rulebook and some tokens later, plus the great War Room app downloaded and I was ready to start again. But not without a fully painted starting force to keep from embarrassing myself.

Somewhere among all this smashy goodness, I managed the task of painting my whole battlebox. I was very proud because my last completely painted army was back in 2nd edition 40k. It was a task mostly accomplished with the liberal application of black primer and some minor detail work. The end result was a paint job that looked like this:

While I'm proud of the bone, the rest of the scheme is very flat. I wanted some more color, something a little more vibrant than the old black or the newer grey-green look of the official schemes. I chose purple: still evil but not boring.

I kept the original metal and bone work, added heavy purple highlights, some hard pink highlights, and repainted the grass flock brown. The flock was drybrushed with a light bone color to give an ashy look and I chose yellowed grass to contrast with the purple. All in all I am happy with the end result.

I also gave my warcaster, Warwitch Deneghra a quick update too: 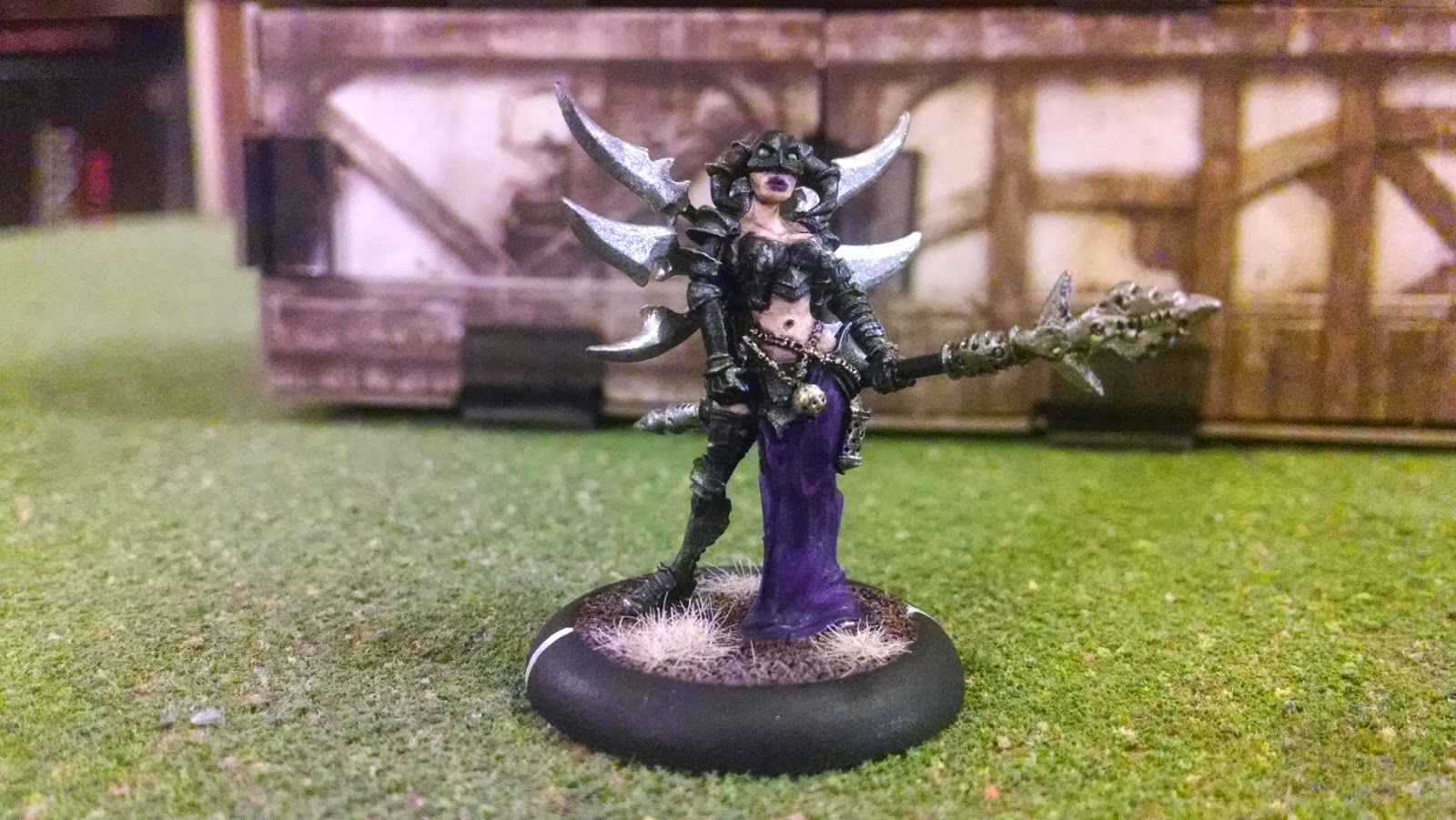 This just had a purple wash added to the skin and a re-highlight, plus the cloth painted purple. The rest is all original paint. The base was done the same as above.

My ultimate goal is to get a 15 point duel force painted up so I can play the occasional small game. My hope is that this project will lead to me joining the local WarMachine community and get me out of the house a bit more. Of course, true to form, the WarMachine night is on a night that I work regularly. Oh well. For right now I'm having fun painting and there are no shortage of players to duff up some metal on a different day!

Happy gaming!
Posted by TheUndergroundLair at 11:37 AM