So, 2013 has gone and it's been a great gaming year. I discovered many new games (definitely more than my lazy ass can write about). It's been a fun ride. But I have come up with a few things I want to be better about. Part of keeping this blog is to have a record of at least some of my gaming experiences. It seems a shame for me not to learn a little bit from this as well.

I've come up with a short list of things I want to better myself about. I'm not going to promise that I will do these things. I can't promise that. I have non-gaming resolutions that I will be working harder to keep. But I really, REALLY want to fix these things about myself.

I have a huge backlog of unpainted miniatures. Just piles and piles, accumulated over 2 decades of gaming. Some of them aren't even stored in my house. They are ancient ghosts of gaming past, lurking in my parents' basement waiting to be rediscovered.

This is not a resolution to paint all of those miniatures. That way lies madness and regret. But I do want to increase the volume of my painting, in hopes that it might reach a point where I am starting to get ahead, or at least does something to stem the tide of incoming grey plastic and metal.

The key to finishing a project is actually doing it, even if it's just a little bit at a time. I haven't done much of anything paint-wise in over a month (hence, no December update). To fix this, I want to try and paint at least 2 hours a week. This could be a single session, or many smaller sessions as long as I reach 2 hours. That is plenty of time to finish at least one simple miniature or make good headway on a more complicated one. The hope is that I can slowly wear away at my mountain of miniatures like water against stone.

The second benefit is that hopefully the constant flow of painting will make it second nature. Maybe 2 hours will turn into 3 or 4 without noticing and I will become some sort of painting machine. With more painting comes practice, improved technique and maybe a shedding of some of the MAJOR lazy painter habits I have picked up.

Somehow I have acquired a lot of games. Not as many as some, but my BoardGameGeek profile lists almost 100 games and expansions, and I know that there are more than that because I'm definitely too lazy to have entered them all. This is really awesome but it is becoming a problem.

You see, to me my gaming collection feels like this: 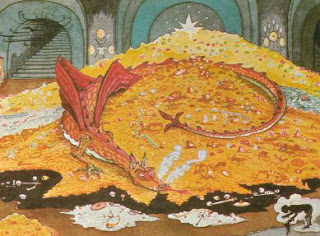 But it is probably something more akin to this:

Not only am I running out of space in my gaming room, I seem to be acquiring bigger, chunkier games all the time. Ones that I can't Tetris into a shelf or cupboard simply sit out. They are making their way into the living room, spare bedroom and even kitchen. I have had 2 games on my porch for a couple months now because bringing them inside means finding a place for them and accepting reality.

So, I need to get ruthless and get rid of some stuff. Preferably sell them off, but maybe give them away. I would hate to throw anything out. But I have games I never play (Rook, Killer Bunnies), games I actively hate (The Lord of the Rings Dice Building Game) and games that didn't end up quite as cool as I'd like and just don't see enough table time to justify keeping (Abaddon). None of these games need to be in my house.

There are also great games that are just more of the same kinds I already own. For example, I own all 3 D&D Adventure System games, but I only ever play Wrath of Ashardalon. I would hate to part with Castle Ravenloft, and the completeist in me says keep Legend of Drizz't too. I would have a CHUNK more space if I got rid of them. But just thinking about it makes me want to weep. A some point, though I may just have to get that ruthless.

BE HAPPIER WITH WHAT I HAVE

This is true in regular life too, but it needs to be doubly true with my games. I already had 4 Warhammer Armies, but yet I HAD to kickstart Kings of War and get another whole orc army. Did I really need a 5th fantasy army? Kings of War lets me use any of those other 4 armies just fine. It doesn't need specific miniatures. Now I have 100 or so orcs that have moved in, and though I love them dearly, they take up a lot of space.


The same goes for backing Reaper's Kickstarter when I had piles of D&D pre-paints. I have more dungeon crawlers than any other single type of game I own, but I keep buying more. I don't even know why I keep buying Magic cards anymore because I have used the same deck since Ravnica came out. Not Return to Ravnica. Ravinca: City of Guilds. That's 8 years of new cards that have been kinda just sitting around.

I need to realize that I don't need every HeroQuest/Warhammer Quest clone that comes out on the market. I need to find ways to use the miniatures I already have (and paint them; see above) instead of snagging every sculpt that takes my fancy. At least I need to make sure that whatever I'm getting fills a new niche in my collection. That way I'm broadening my gaming horizons instead of building forts out of piles of dungeon crawlers, wargames and CCG/LCGs.

Which brings me to...

BE A MORE SOCIAL GAMER

I am a horrifying hermit. Except that hermits at least have squirrel friends to talk to. 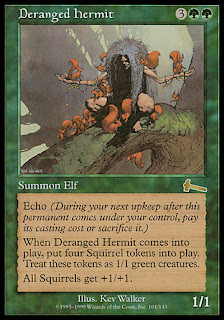 I actually do have friends. Not very many but I have them. But they are friends I've had since high school or are family that shares a similar madness to mine. Life has gone on and many have left to have lives, careers and other selfish, bastardy things. I play D&D by Skype now and those friends I see in the flesh I only see for a couple hours MAYBE once a month. We're lucky if we even actually get to game.

Not that I don't love my friends but if I don't get out more, I may actually end up talking to squirrels. I spend way too much time alone and an alarming amount of my gaming collection is made up of solo games and co-ops. It would do me a world of good to meet new people, hear different points of view and experience new things before my social life completely stagnates.

This is the hardest of my resolutions because there are a few major hurdles. I'm extremely introverted. Half the time, I actually prefer being alone. At times, even other gamers have a hard time figuring me out and I'm terrible at getting to know others. I'm just not built for it.

On top of that, over the past couple of years the social anxiety I have always had has gotten steadily worse, probably due to isolation. I would love to just plop myself down at a board game night and just play, but the idea terrifies me. I would have apoplexy. There would be sweat and fidgeting and I would leave after an hour, even if I could muster the courage to go. I long for the days when I would play pick-up games of 40k or spent time at my local game store teaching new gamers to paint.

I don't have any idea how I'm going to accomplish this last one. It seems hopeless, but I recognize it as a MAJOR change that needs to be made in not only my gaming life, but my regular life as a whole. And hopefully recognizing that is the first step.

Have a great gaming year, fellow gamers! Hopefully it will be the best one yet!
Posted by TheUndergroundLair at 7:39 PM

Email ThisBlogThis!Share to TwitterShare to FacebookShare to Pinterest
Labels: Musings