Do You Hear That Rumbling Sound?

Unlike a lot of people who backed Steve Jackson's OGRE Designer's Edition, I had never payed the game before. There's no particular reason for this. It has been around for 30 years, and I like everything it has to offer: Dystopian sci-fi; lasers and tactical nukes; and giant, soul-less cybernetic tanks that crush everything in their path. Steve Jackson also makes some of my favorite games.

I also recognized this as a turning point in gaming as a whole. Kickstarter was still kind of a new thing in terms of board games at that point, and reaching almost a million dollars was mind boggling at the time, even though more recent tabletop endeavors have reached more than three times that amount. I was more than happy to drop $150 on both a good game and a massive icon in board gaming culture.

When OGRE and it's accompanying swag arrived, I was not disappointed. 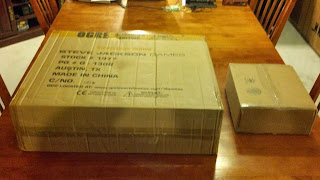 As you can see, it arrived in 2 boxes. There is a practical reason for that. That giant box taking up almost half of my 6'x4' table? Yeah, that's just the game. 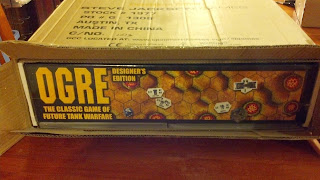 That's 28 pounds of board game stuffed in there, with barely any room for packing material. It's 24 by 20 inches, and almost 6 inches deep. That is big enough to play other games on top of. 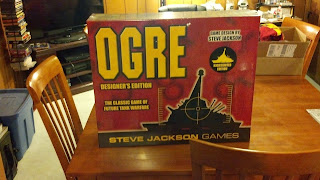 Standing on end, it is like a massive monolith to the gaming gods. I half expected apes to gather around it and start murdering each other. 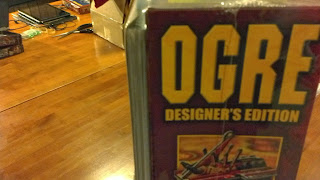 Given that the counter sheets don't fit in the box unpunched, it came packed with it's insides on the outside, covered with a sheet that looks like the back of the box. 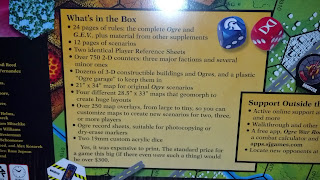 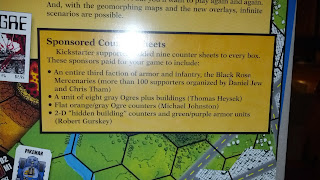 It's all very pretty and informational. It's practically a poster in it's own right and would look very nice in a frame, if one had the space on the wall.

It also describes the entire contents of the box. There is so much in this box. It's crazy. It is the work of an absolute madman. Thank you very much,
Mr. Jackson, for including us all in your madness.

Speaking of which, there are a number of sponsored sheets in the box, purchased by some equally as mad gamers. Maybe if I had the disposable income, I might have done the same. But probably not. It takes a special sort of wonderful crazy to spend hundreds to thousands of dollars on little cardboard counters. And they are absolutely wonderful additions to the game. Thank you so much for your craziness!


The sheet does a good job of telling you what's in the box, but it doesn't really prepare you for what's inside. Luckily, it has a back side that at least tries to warn you. 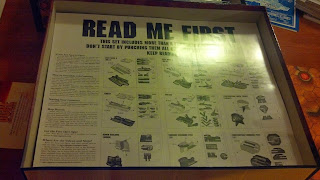 It has a set of lovely (and pretty necessary) assembly instructions. But in case you can't read that headline, take a closer look. 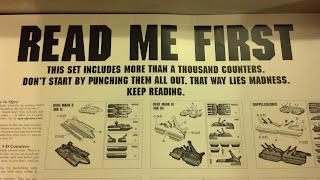 Yes, you are reading that correctly. More than a thousand counters. That is not a lie. Prepare to set aside 3-4 hours to punch everything out and assemble it. It sounds daunting, but you will love every second.

Opening the box, you are greeted with this: 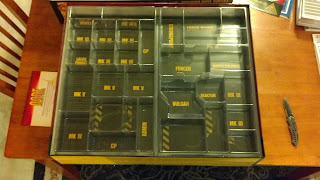 These two plastic trays are the OGRE Garage and will hold all of the OGREs from the base game, with a fair bit of room to spare for extras. Filled up, it looks like this: 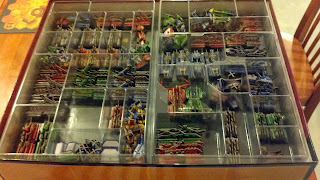 Taking those out, you see the bottom tray, filled with the original OGRE map and FOUR maps (in 8 pieces) for G.E.V, the companion game to OGRE. That's right. You get 2 games in the box! 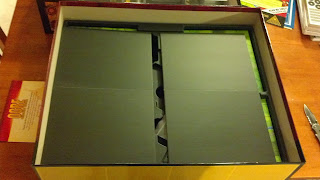 Below the boards is a super-useful tray with slots for everything and more, much like the garage. 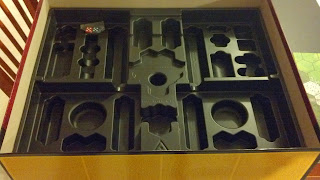 And here it is, filled not quite to the brim with cardboard goodness: 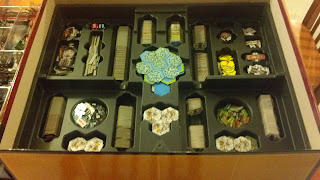 All those perfectly organized counters started out looking like this: 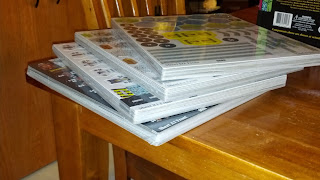 The box of course includes the rules, reminder sheets and several rosters for the different OGREs, plus a set of very pretty dice: 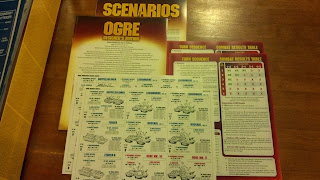 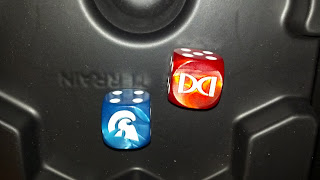 Lastly, there is a gorgeous poster of the blueprints to an OGRE Mk V. I am still looking for a place to put this and I fear it will never fit anywhere in my house properly. 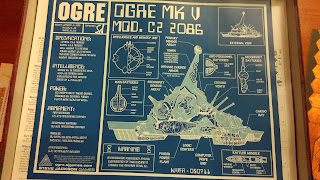 Of course there is still one tiny box to explore. Yes, the swag! The box contains an extra set of the sponsored "Targets Go Boom" sheets: 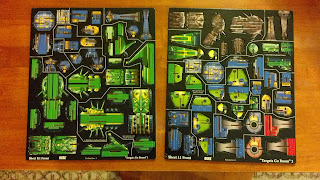 Some lapel pins with the Paneuro and Combine logos: 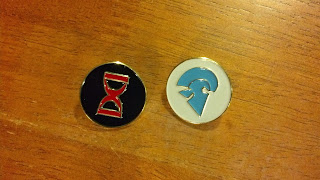 An ugly red shirt that I can never wear because I am terribly ginger: 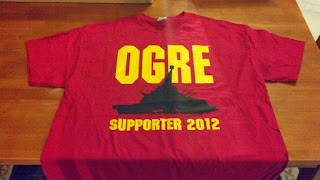 Honestly, I wish there had been color/design choices for the shirts. I know why there couldn't be, but I would look terribly silly in this. I think some black and white shirts with classic counter images on them would be terrific and would buy one in a heartbeat.

The box also had a large, (equally ugly) red carry bag. I was also kind of disappointed in this. The bag is very tight, making it more like a game sleeve. The shoulder strap is also about 6 inches too short to be useful. As much as I'm loving this game so far, I don't really need it hugging my body while I lug it around. 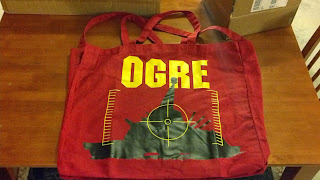 And finally, it comes with a pocket version of OGRE, in a similar style to the way it was originally produced back in 1977. I was most excited for this because I can take OGRE everywhere and if I don't want to lug almost 30 pounds of game out to play, I don't have to. 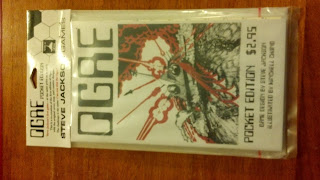 As I understand it, this version is going to available to buy for a limited time at the original $2.95 price. So, yeah, keep an eye out and go get one when it becomes available.

So after all that, I'm going to leave you with two images. The first is a classic game of OGRE, set up and ready to go: 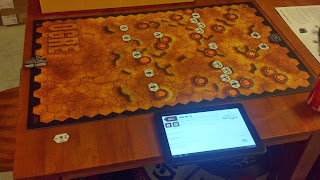 You will notice I have my tablet out. If you have a mobile device capable, download the OGRE War Room app. It tracks your games, OGRE stats and even calculates combat for you. This is good, since all combats come down to reducing fractions in order to roll odds. Not terribly hard in the grand scheme, but why do more work than you have to? Plus it has music and sound effects! Pew pew!

The final image pretty much speaks for itself: 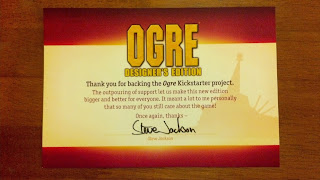 No, thank you, Mr. Jackson, for producing this fine game. It is a work of art. Your baby has finally grown up and is demanding the attention it deserves. The journey from pocket game to massive gaming icon is nothing short of amazing.

Finally, I know there are probably lots of shots of things I missed that people would like to see. Leave me a comment below and I would be more than happy to post some shots in a second article. Let me know what you want to see!

Posted by TheUndergroundLair at 11:49 AM