Recently, for whatever reason, I began to wax nostalgic for the card game Wyvern. 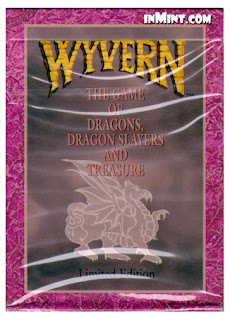 I'm not sure if anyone else really remembers this game. It came out in 1994 during the early days of the birth of CCGs. During these dark times, Magic crawled from the primordial cardboard soup and became an absolute powerhouse, making each and every game company out there shit their pants at exactly the same time. And immediately after wiping, each and every game company made a made dash to cash in. U.S. Game Systems was no different.

While I was huge into Magic at the time, I was still willing to try other games and I was always looking for a game that might unseat it and give me a little variety in my gaming group. Wyvern wasn't that.

There are two things I remember most about Wyvern. First, it was the only one of my games my sister would request playing with me. I could occasionally coax her into a game of Magic or HeroQuest, but other than that any games we played were along the lines of Uno or Monopoly. Wyvern, though, we would play for hours. This may have had something to do with her having better cards than I did. We were pretty much playing out of starters, and since U.S Game Systems found the idea of distribution laughable, we only managed to find 2-3 booster packs each before the game disappeared. Luckily the game was balanced reasonably and I had more game experience, so we were generally on even terms.

Second, was the art. The game itself was pretty ugly. Bland frames with only 4 different colors, a complete lack of icons aside from a couple gold coins here and there, and all game text on the cards was in ALL CAPITAL LETTERS, SHOUTING THE CARD'S EFFECTS AT YOU EVERY TIME YOU LOOKED AT IT. But U.S. Games Systems had enlisted Peter Pracownik to illustrate the cards and I loved it.

Peter is a master of painting dragons. His art is both simplistic and nuanced, filled with mythology and color. His work has this wonderful feeling of "oldness" that makes it seem like it comes right out of the middle ages. Not everyone is a fan of his style, but I think it worked perfectly for Wyvern. He was the only artist for the first set and the few other artists that came after followed his lead. It made the game very cohesive in a way other CCGs were not. It has been described as "bland" or "samey" but I honestly think that those people were just plain expecting something different. I think all the similarities really tie the game together, like a rug in a bungalow.

Ultimately, though, what kept me playing the game was the game itself. For those who haven't played this game, you had two decks of cards (regrettably with the same back). One deck had your dragons and some terrain that you would use to fight your opponent's dragons, and the other had actions and treasures that would affect the cards on the table. At the start you would deal out 6 cards from the dragon deck (Dragon Lair) and arrange them  on the table 3 cards wide and 2 deep, face down. Then you would draw 7 cards from the action deck (Treasure Horde) for a hand. You would start with 25 gold and pay for cards out of that.

During your turn you could play actions, turn dragons face up (using up gold to do so) and attack with them. At the start of the game, everything was face down, so you were often attacking blind. The card you attacked would get turned face up, and if it was terrain it might do bad things to your dragon, like a trap. If it was another dragon, the two dragons would fight and the bigger one would win, eliminating the loser. This would continue until one player ran out of dragons and lost.

I mentioned before that the game was pretty balanced, and there were a few things that contributed. One was that you started with a pool of resources that dwindled instead of getting bigger. This meant that you could turn over a badass 7 gold dragon early on, but if it got ganged up on or slain by a dragon slayer card, you were out almost a third of your resources for the rest of the game. There were ways of getting more gold, but they were pretty few and far between. Blow your gold early and you were doomed to failure.

The face down battlefield really helped as well. It created a fog of war that was hard to navigate, even with experience. You never really knew what was waiting for you and making those decisions blind was bound to end up with a mistake or two in your perfectly crafted plan.

You would have the occasional jackass that would make all dragon slayer decks or use nothing but terrain, but those were easily worked around once you knew their habits.

Ultimately, Wyvern failed and it wasn't hard to see why. Few CCGs became truly popular, besides Magic and those who were propped up by the itinerant, pre-teen spend-lust of the Saturday morning cartoon crowd. Wyvern was ugly, needed a mountain of editing, and was incredibly hard to get hold of in some areas of the country. There was tactical depth there, but not on the same level as Magic.

Wyvern would have really benefited from being a boxed, single deck game. Hell, they even included rules for playing out of a single collection, with one Dragon Lair and Treasure Horde for both players. Luckily someone at U.S. Game Systems realized this and they put together Dragon Hunt, which is exactly that. It uses exactly the same cards and rules, but with different backs so you can't use your old Wyvern cards with them (because fuck you, that's why). It's like 8 bucks, so it's a great deal. It's a great game if you want something light but strategic.

I went looking for my own cards and found a small pile of extras, but not my actual deck. Still wanting to play and maybe use those cards again, I went on eBay and found 2 sealed starter decks for less than $11.00 with shipping. I can't wait for them to arrive. I definitely plan on using the one collection rules. That way my sister won't have better cards than me this time around.
Posted by TheUndergroundLair at 1:13 PM