So, a week ago I celebrated my 32nd birthday, and this year I decided to do something a little different. Instead of a big family get together or a trip to Maine, I sent some invites to my closest gaming friends for a weekend of laughs, gaming and ice cream cake.

I enlisted the aid of my beautiful wife, Brigid,  to help decorate and chronicle the day. Little did I know that she had a plan, and while I was at work the day before, she set about decorating our porch with an Avengers theme. I was elated, because I am essentially 8 years old when it comes to superheroes.

Since the next day was going to be jam packed with games, my dear wife gave me my present early. I now have my very own copy of Arkham Horror! Being a big Lovecraft fan, it was a game I'd always intended to own but never got around to. Now it was all mine to devour my life with hours and hours of gameplay.

The night before the big event, my friend Marc arrived to stay. We spent that night getting some extra gaming in, so I introduced him to X-Wing, Quarriors and DungeonQuest.

The next morning after breakfast we were joined by my friend Jay. Unfortunately my cousin and his wife ended up not being able to make it, so our group was a bit smaller than expected. However, I still had two games on the agenda that I wanted to make sure got played, and I wasn't going to let dwindling numbers stop me.

The first was Epic Spell Wars of the Battle Wizards: Duel at Mt. Skullzfyre. I had recently acquired this game and it ended up being a blast. It is insanely random and ridiculous and worth every penny. I don't think we've laughed so hard around a gaming table in a long while.

The second and most major thing I wanted to accomplish was a game of HeroQuest. As my all-time favorite game, and the gateway drug that got me into gaming in the first place, it was essential. I whipped up a quick custom scenario and handed out some characters. Since we were short players, Brigid took both the Barbarian and the Wizard. She named them Jethro and McGee. She likes NCIS. A lot. 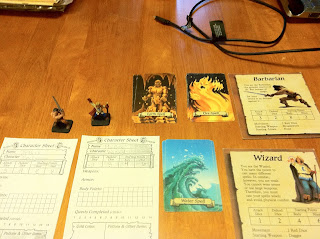 Seeing the perfect excuse, I set up my 3D dungeon terrain for us to crawl through and made sure there would only be painted miniatures so we could enjoy a beautiful game. Mentor was sending our heroes to fight an evil Chaos cult as a test of their abilities. Would they make it out alive?

The cult was swiftly destroyed and much loot was had. All in all, a great game. I saved the characters so when we do this again we can continue from where we left off. I have a whole year to design something fun and more challenging.

We wound down the day with a game of the DC Comics Deck-Building Game. It's not the deepest deck-builder out there, but it was great for coming down off the gaming high. It was also the only game I won all weekend, with Jay coming in second by sheer amount of cards in his deck. Apparently his strategy was "buy everything". And it almost worked.

And that was Birthday Gaming Extravaganza 2013. I had initially named it that as a joke, but honestly I like it. I intend to do this again next year and possibly for years to come. I will certainly plan it a bit better, possibly with further advance notice, and a better system for taking pictures. There are certainly a slew of games coming out in the next year I'd love to showcase!

See you all again at BGE 14!
Posted by TheUndergroundLair at 11:25 PM