I've been feeling in a Lovecraftian mood lately, and also feeling painty, so what better than to sit down and work on something with tentacles?

A while back I decided to put some extra Tyranid spore mines to use by slapping some paint on them and using them for extra-dimensional creatures out if space and time. They fit all the criteria: imhuman looking, float/fly by imperceptible means and trailing tentacles behind them. Here's the group shot: 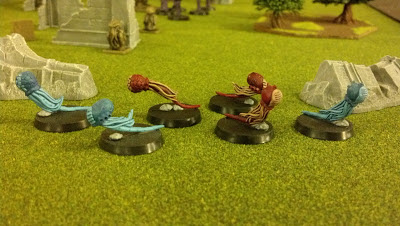 I painted up the blue group first. I chose that particular coloration because it was unnatural and seemed to fit ethereal, otherworldly beings. At this point I had decided all the tentacles should be the same color, and it makes them really look like space jellyfish: 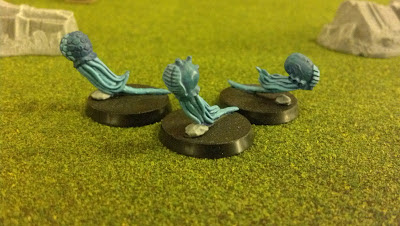 The red group I wanted to do something different with. I aimed for a more organic, fleshy look, almost as if they were covered in blood and ichor. I chose a human skin color for the accents and tentacles to make them look especially fleshy but still unnatural. I chose to leave the central tentacle red so as not to over-use the flesh and keep the red, bloody color strong: 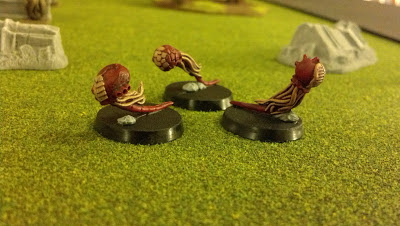 Simple models and color schemes, but I think effective. I know they will find their way into Song of Blades and Heroes or D&D adventures for sure. I'm hoping I will be able to use them in Strange Aeons, which I will be getting to play sometime after the next couple weeks. I already have cultists to summon them!

Posted by TheUndergroundLair at 12:25 PM