The Well of Souls

First day of May and already I have a post! Given that I am probably the laziest git on the planet, I'm pretty proud of meself. 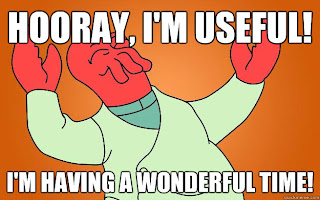 For Christmas this year, my lovely wife's parents gave me the gift of terrain (among other things). Terrain is a gift that keeps on giving, since it can be the backdrop of countless battles, even though the armies may change. This particular gift was Games Workshop's Deathknell Watch. I do recommend this kit for fantasy players as a whole since a) it is relatively cheap for GW, b) everyone needs a watchtower to fight over and c) the base can stand alone as a separate piece. It is covered in skulls like all GW stuff but, unlike a lot of complainers in this hobby, I actually like that sort of thing.

The tower itself will be the subject of another post, since today I wanted to focus on the base. The base is some sort of arcane well and I wanted to be able to use it while I worked on the rest of the piece. I was able to knock it out super quick and despite this, I am very pleased with the result: 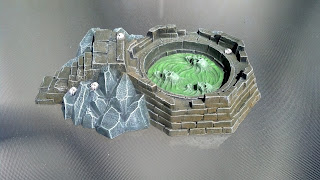 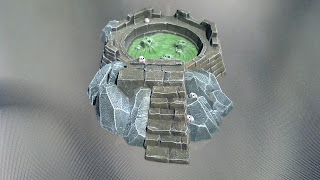 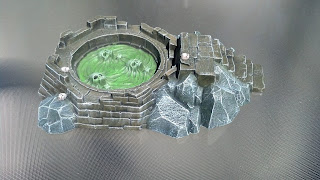 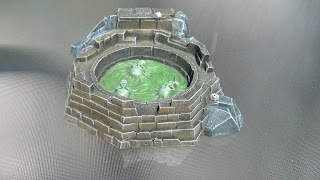 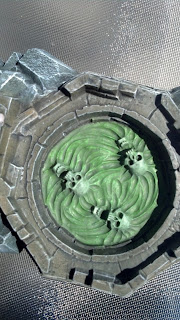 And the obligatory action shot: 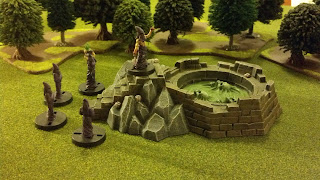 I've come to really enjoy painting terrain. It almost always looks nice even with the most basic techniques. In this case, I used a similar method to my dungeon terrain but changed up the base color for the brick with a golden brown instead of the grey green (which I used on the rocks). As you can see, even with the same final drybrush color, there is plenty of definition between the base coats. The inside of the well is just green layers of drybrushing, with a final dry brush of rotting flesh color on the giant skulls.

I can't wait to play a battle around this. It may take a while for me to get the tower all set, but I've already got a great piece to use. It already gives me ideas for scenarios.
Posted by TheUndergroundLair at 2:31 PM