I missed posting last week for a very practical reason: I got a case of orcs.

By that, I mean that my Kickstarter order from Mantic Games finally arrived. My excitement was only slightly dampened by the fact that it was over two months late. I had originally delayed my order to the August shipping so I could get a nice shiny backer rulebook with my name in it. But then the August orders overwhelmed Mantic and they didn't go out until September. No biggie, since I had already been waiting since May or so and they had provided me with a lovely PDF copy to play with and I have no shortage of miniatures.

But then disaster struck. All of September came and went, and there was no box from Mantic. I contacted Stew on the forums (great guy) and he said it may have gotten lost in the mail. However, he had them ship out a new order immediately and it was only a couple of days before it arrived. The arrival was slightly marred by the fact that I got a regular book and not a backer book, so it had no signatures from Mantic's Ronnie Renton or designer Alessio Cavatore, and it did not have the backer name pages.

Another round of messages to Stew and I was assured I would get the signatures on a new book(which I hope will come soon), but I would not be able to get a real backer book because they were out. The whole reason I delayed my order in the first place (and subsequently the reason it got lost in the shuffle) was for that particular book. So I'm still a little disappointed because I wanted to be able to point to my name on the page. I'm narcissistic like that. but Mantic's response was so great and fast that I can't help but still love them (thanks again, Stew!).

Besides, I still had a whole orc army to assemble. And, I had plenty of sprues. I don't know if it was a mistake or intentional awesomeness on Mantic's part, but I had a whole extra 10 orcs in my army box, enough to expand one of my Ax units to a 30 man horde, or (as I chose to do) make a whole new unit of elite Morax warriors with some creative assembly and a dash of command bits leftover from some GW beastmen.


So far I have a solid block of infantry assembled into a 1000 point army and I am still working on getting the Gore Rider Cavalry assembled. 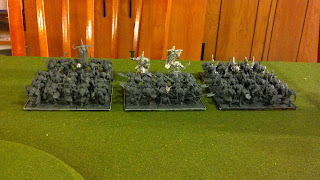 And why, do you ask, could I be so busy for two weeks and still not even be finished? Three reasons:

103 in the final count, not including a couple extra sprues that don't add up to full units. I am also concerned as I had not calculated how I was going house these orcs among my many other armies.

So, what do I think of Mantic and Kings of War?

First off, Mantic is a great company. So far my relationship with them has been rocky, but I really believe they are trying to be the company I want for mass battles gaming. They have managed to pick up where Games Workshop has left off. Their miniatures may not be as pretty as GW's but they also don't require me to take out a bank loan.

They also provide some great board games with Dwarf King's Hold and Project Pandora. They are also friendly and listen to their fans, something a lot of companies (GW most of all) don't do these days. While I may have a ton of miniatures and could have gotten to playing Kings of War with my GW armies I already own, I like Mantic enough that I bought a whole new Orc army. So that's something.

As to Kings of War, I am already a fan. I have already converted all of my Warhammer armies over to Kings of War. That is an extremely easy task, since not only does the main rulebook come with EVERY army list for EVERY race in he game, but 95% of the units are analogous to Warhammer units and races. It's not a perfect fit (I am still trying to get my Necrosphinx into my Tomb Kings undead) but it works.

The game itself is really nice. Kings of War is written by Alessio Cavatore, in my opinion the best author of the WHFB ruleset. You can see where he took many of the ideas in WHFB and streamlined them. The result is a game that plays fast and seems tighter than its predecessor.

For example, movement is a simple "I move here" affair. There is no wheeling, just pivoting on the spot. Terrain slows you down like it should and is never mysterious. Unless you and your opponent agree beforehand, forests never eat your troops and rivers don't boil the skin off you just for daring to wade across them. Even charging is simple and thankfully non-random.

Attacking is streamlined so that there are no charts. You simply have a melee or ranged score to hit and you always hit on that score, barring modifiers like range, cover, charging defended obstacles or cavalry attacking a block of spears. Your unit has a number of attacks, used for both ranged attacks and melee, and you simply roll that many dice to hit. Also, only the unit that charges gets to attack. Afterward the units are separated and the attacker waits for the inevitable counter-charge.

Each unit has a defense score required to hurt it, and you simply roll to beat it. You get a bonus if you have Crushing Strength or Piercing. I'ts extremely straightforward. It's as if they pre-calculated things for you so you could spend less time looking things up and more time gaming.

Magic, too, is simplified. You can zap things, heal things, move units (mostly an undead thing) or breath fire. This sounds limiting and kind of generic, but I like that aspect. When I use Zap, I could be throwing fireballs, lightning bolts, dark energy or fluffy kittens. It's all up to what I decide happens.

The one part of the game I am still on the fence about is how damage is applied. Models are never removed from units. Instead, they are treated like one big model and take a number of wounds that must be marked by the unit. This is good for a couple of reasons. One, you can model your whole unit on a single base, allowing you to make it into a beautiful diorama piece and never having to worry about models falling off. Two, you always get to see your units in their full glory until they are completely destroyed.

This approach also has its negatives. It requires that you have some sort of wound counters to mark the unit. Most people will use dice, as it is not uncommon to see wounds in the double digits. This is a bit fiddly, since you have to make sure you don't accidentally pick them up and roll them when you attack, or accidentally bump them and turn the die. You could also use counters/tokens but they pile up fast and have to move with the unit. The opportunity exists for some really cool diorama type counters though, and I am intrigued with what I could come up with if I get ambitious. Finally, you could just write it down on a sheet of paper. That's really the most elegant solution as long as you have some way of keeping track of who is who.

I also very much like the visceral feeling of knocking over "dead" miniatures. Hopefully my inner 6-year-old will get over not being able to do that.

The only aspect of the game I dislike is Nerve. Nerve is both the unit's health and morale. After doing damage, the player who attacked rolls two dice and adds the number of wounds on the unit. If it hits the unit's Wavering score, the unit is disrupted and can only really retreat in the next turn. If it hits the Rout score, the unit is destroyed. Anything less and the unit keeps fighting.

Maybe I'm too used to Leadership tests, but I find the Nerve test counter-intuitive, in that as the attacker I am rolling it. If this represents the damaged unit taking the action (i.e. holding or fleeing), shouldn't the unit's controller be making the roll? There has been so much focus on keeping only the active player performing actions that this seems a little forced. This could have been the one place in which your opponent could have participated in combat during an otherwise one-sided affair. Player interaction is important, and it can mean the difference between combat feeling like a tense battle of sides or a total ass-kicking while you lie helpless on the floor in a puddle of warm urine. Functionally it makes no difference, but emotion is where we live when combat ensues.

Ultimately, I love Kings of War so far. I was actually going to include a battle report. I was invested enough to take pictures. But none of the pictures came out well, and my new orcs got beaten to a bloody pulp by weedy elves, and nobody enjoys watching a blurry ass-kicking.

I don't think Kings of War will ever fully supplant Warhammer for me. I am too excited by GW's fluff and style, and occasionally a massive, detailed, crazy 4-6 hour game is exactly what you need. However, Kings of War plays so quickly that I know I will be playing it more often than WHFB. The last game I played was about 1000 points (equal to about a 1500 point Warhammer game) and took only an hour and a half. And that's without uber-total-unit-destruction spells to eat half an army. Plus, I am finding that including things like large monsters are less of a liability (they act more like regular units), so I am getting to use my lovely High Elf dragon rider that has been collecting dust for a couple years.

So I suggest you try it out. You really have nothing to lose. The basic rules are FREE.

Didn't I tell you Mantic was awesome?
Posted by TheUndergroundLair at 10:55 AM