"I don't think he knows about second breakfast, Pip."

For those who are in the know, tomorrow marks the 75th anniversary of the first printing of J.R.R. Tolkien's "The Hobbit". Obviously this is a big deal for us Hobbit-folk (or those of us who would like to be) and a bunch of clever Hobbitses have started a movement to celebrate Hobbit Second Breakfast. 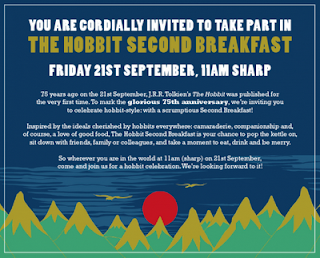 For those who don't know, second breakfast is the second of the six Hobbit meals (the others being breakfast, elevenses, luncheon, dinner and supper). Being a food lover myself, I am totally in on snarfing down a few pastries with some tea, but as I am a gamer, I figure I need to do something on such an auspicious day concerning the hobby.

My plan is to get up early and assemble a deck for FFG's Lord of the Rings LCG using cards from the recent The Hobbit: Over The Hill And Under The Hill expansion. 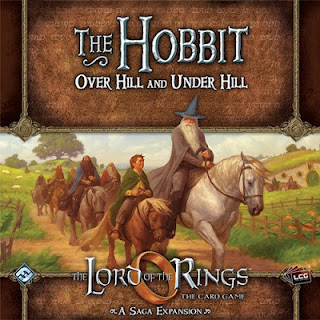 I love this particular expansion because, more than any other book detailing the adventures of Middle Earth, I love "The Hobbit" most of all. The dwarfs are my barometer for all things dwarfy; Gandalf is a crazy old wizard but obviously wise and powerful; and Gollum was creepy and tricky, but not an anti-hero. But moreover, the true hero of the tale isn't some human kid being thrust into danger due to some prophecy. I honestly hate stories like that because they are lazy. This isn't a coming of age tale. The hero is a middle-aged  Hobbit, set in his ways and living a life of comfort, practically forced into becoming a burglar-for-hire by a crazy old wizard, for reasons known only to a crazy old wizard.

But once the opportunity arises, Bilbo musters his courage and makes the decision to leave his comfy world and taste adventure. The moral of the story isn't that some of us are destined for greatness. What I took away from it, even as a child, was that it's never too late to be adventurous and even the most timid person has a hero inside them. We can all be the hero if we just choose to go on the adventure. And I think that is a much better lesson than most fantasy stories teach these days.

So I can't wait to build a deck filled with Thorin, Bilbo, Gandalf and the rest of the dwarves. I can't wait to sip a cup of tea while munching on a few biscuits and scones, all the while attempting daring quests in card format and wistfully remembering my first readings of "The Hobbit." I can't wait to do these things because for a short time, I get to have some small sense of what it is to be a Hobbit.

And that is a very brave thing to be, after all.

By the way if anyone happens to live nearby, my family's videostore, MGM Video, is celebrating Hobbit Second Breakfast with free coffee, tea and pastries. We will also be playing the animated version of "The Hobbit," as well as the Lord of the Rings movies throughout the day in honor of Mr. Tolkien's accomplishment. Come in and have a bite, if you like.

What are you doing to celebrate Hobbit Second Breakfast? Will you be baking? Gaming? Maybe painting a few Lord of the Rings miniatures? Or maybe just a movie marathon? Let me know in the comments!
Posted by TheUndergroundLair at 8:14 PM